CES 2021: The Future Might Be Even Bigger Touch Screens In Your Car 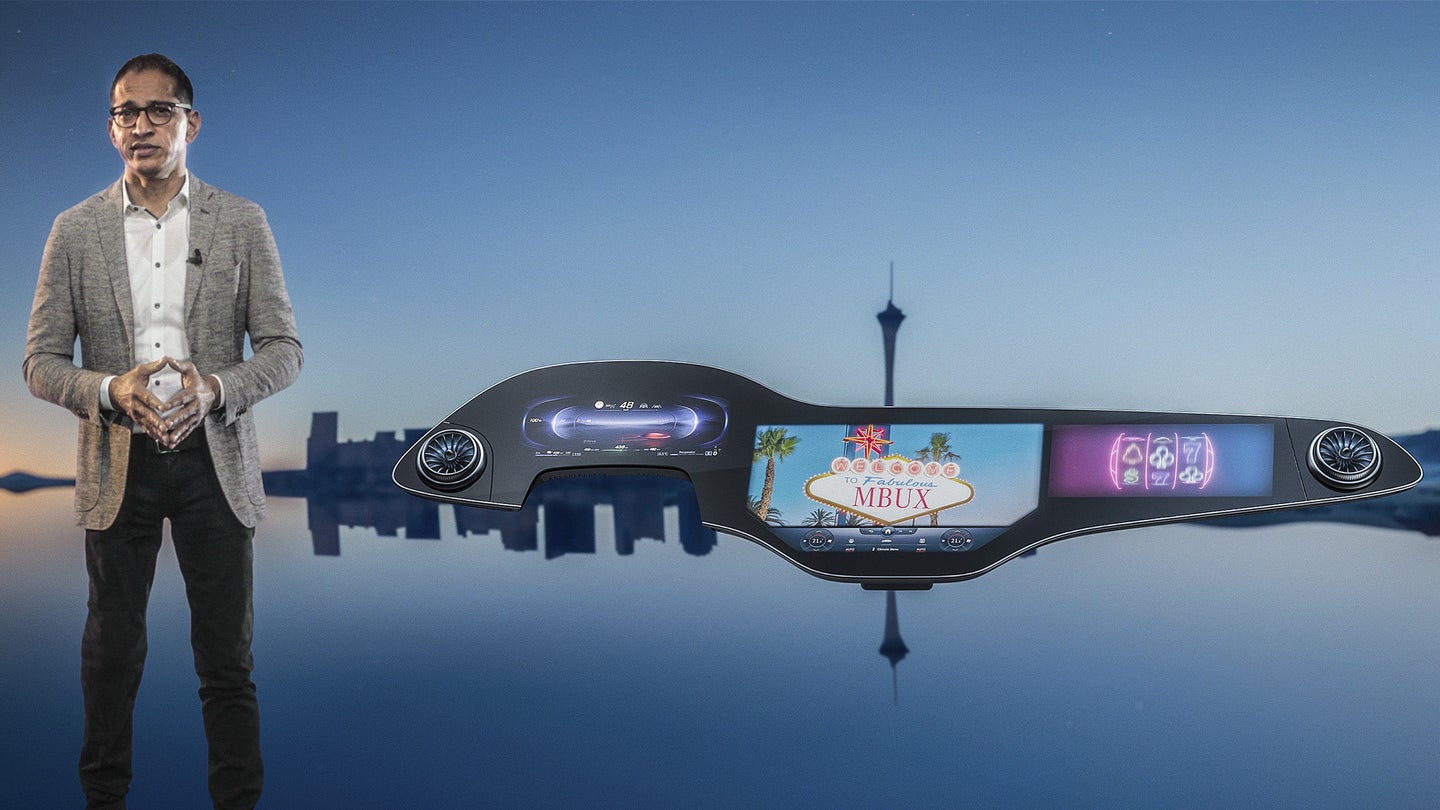 From $16,000 bathtubs to wine robots, CES 2021 hasn't let the pandemic get in the way of showcasing tons of new, innovative and downright bizarre products. Many of the creations shown, however, have also been just really enormous touchscreens for your car.

The question of how the information on your car's dash should entertain you has been thoroughly answered, and perhaps someone in the near future will also address "why?" Here are the five biggest and most questionably useful solutions to the alleged problem from just the first day.

Twenty years after the introduction of the first iDrive infotainment system, which was in 2001 if you want to upset yourself with time vertigo, BMW is holding itself responsible for having introduced in-car infotainment systems—much like every good roadside cafe claims to be "the first of its kind."

In any case, BMW is focusing on its new iX and its revamped iDrive experience.

Like a pandemic-limited DM slide, the iDrive is now touch-starved enough to want to form meaningful connections with you. "The next generation of BMW iDrive takes the burgeoning relationship between a BMW and its driver to a new level. The new system neatly bridges the gap between analog and digital technology," said BMW in a press release. "And this, in turn, heralds another paradigm shift, as the number of available functions in a car and their complexity continue along a constant upward curve."

Harman Really Wants You to Look at a Screen

You might think that by 2021, you've looked at enough screens. There's the bad screen, the smaller but sometimes better screen, the other screen, the background screen, and then maybe you think that going out into the world, safely, in your hermetically sealed bioweapon-proof car should be one of the times you don't look at a screen.

Wrong. You will. OLEDs and QLEDs can immerse you in a virtual environment so surreal that you won't know you exist. You won't ever have to catch a glimpse of the outside world again with these bad boys.

Mitsubishi Is Working on a Screen-Based Garage Door Opener

In the ultimate high-tech fantasy you can live out all your James Bond dreams by attaching your Android phone to your car and using it to open your own garage door. MyQ Connected Garages will make it possible to control things remotely from your vehicle using a simplified touch screen.

Easily one of the most reasonably-sized and driving-focused of the offerings, Mitsubishi alleges we've at the very least asked for it. It says that "Consumers have indicated that controlling their garage door through the infotainment system is one of the most highly desired in-dash features," which ranks it considerably higher than things absolutely no one has ever asked for.

It will launch in 2022 on the Mitsubishi Eclipse Cross, giving you time to get a compatible phone and garage for the full experience.

We already introduced you to Mercedes' 56-inch Hyperscreen but the photos of its presentation, like a big shard detached from any driving experience, really let you think about the thing in full.

Are the fans on each side—which look like something from those huge planes in an Avengers movie—giving you the slight suspicion you might be the baddies, or the MBUX Vegas sign in the middle, above a Windows Media Player interface?

"With a width of 141 centimeters (56 inches), the unique screen unit consisting of three apparently seamlessly merged displays is not only the largest human-machine interface built by Mercedes-Benz to date," says the release. "But also by far the most intelligent – aesthetically impressive, radically easy to operate and downright eager to learn."

Samsung Ushers in the Age of Cockpit Influencers

Samsung apparently thinks your car should be a mobile office.

Not just your mobile office, actually, but what if your car was where you sat to play games with friends—online, obviously. Or, in what I can only assume is an attempt at satirizing late capitalism, why not become a digital cockpit influencer?

In a case example so brutally on-the-nose it would probably get rejected from an adult film pitch, Samsung suggests how you might use your car in the future.

"We are living in an era in which we’re simultaneously creating, consuming, and communicating through content. Today, I’ll use the Digital Cockpit 2021 to make a video about how I spent my day with it," read a press release. "After using its built-in tools to make some quick edits, I’ll upload my video to my social media accounts."

For content, in content, discontent. Oh, and it also sends messages on the hood, in case you ever risked so much as a polite wave through the windshield interaction.