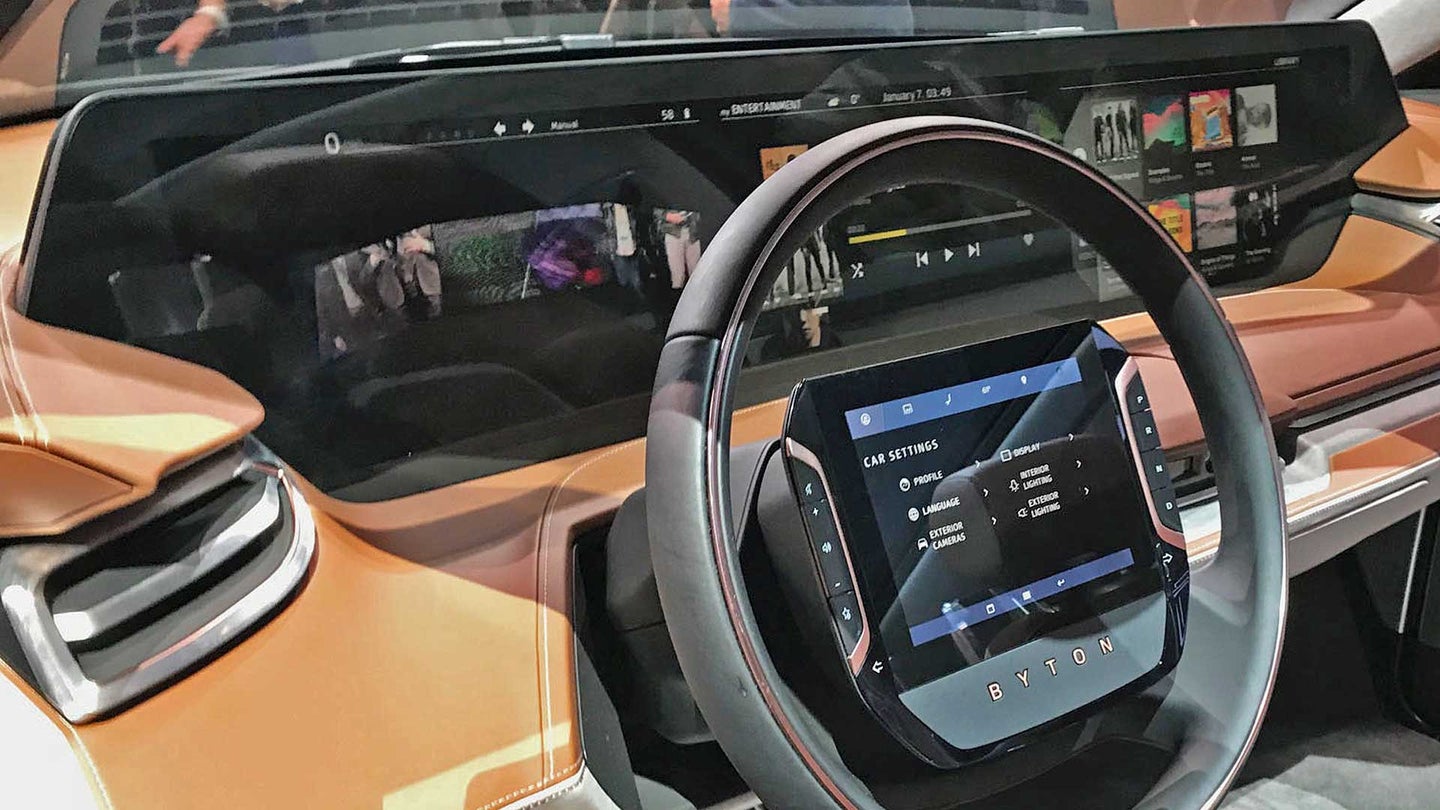 The screens are out of control in the cars of CES 2018. They’re everywhere—draped across your whole dashboard, in your steering wheel, in place of the moonroof above your head. They provide information, data, entertainment, and—the word of the year in mobility circles—connectivity. It’s a good bet that next year screens will be embedded in retractable sunshades that can cover a whole window. Why not? After all, that’s the point of OLED screens—they can be draped over stuff or spooled up until desired.

The presentations in Las Vegas were admittedly mind-blowing. Byton made perhaps the biggest display-screen splash with its concept electric SUV, which possesses a 49-inch screen stretched straight across the dash and an in-steering-wheel display screen. The idea appears to be that the bright, dynamic screens will serve the predictable gamut of functions: entertainment hubs allowing access to video and music, vehicle systems interfaces, and all-encompassing life managers, serving up access to your contacts via voice or video call, social media app, video clip, voice message, et cetera. The screen on the steering wheel would presumably do much the same, and there are as many indications that the systems are intended for the era of autonomous drive—though videos also show passengers watching the main display while the driver pilots the vehicle. And as if that weren't enough, Byton also mentioned something about health monitoring, via on-board sensors, including a weight sensor in the seat.

Harman also had a big screen thing going with its Digital Cockpit reveal. That system uses OLED and QLED displays from parent company Samsung in an equally-generous fashion compared to Byton, but further incorporating access to digital assistants like Alexa and building additional sub-screens into conventional dials and buttons elsewhere on the dashboard, too. As with Byton, one of the use scenarios includes streamed video to help passengers avoid interacting with one another. But Harman had another trick up its virtual sleeve in Vegas: a system called Moodscape that automatically chooses music based on your destination, calendar, or mood, and which features a rather startling feature called a “MoodRoof”—an enormous screen that replaces a typical moon roof with a QLED screen that displays scenery as you drive, based again on what your want to see or which the computer determines you might benefit from. So this could be a ground-up view of trees scrolling overhead as you drive, perhaps a celestial scene at night, or—we’re hoping—a big aquarium, as you drive your submarine down the road.

Other big display news came from Mercedes-Benz, with its newly invigorated User Experience, a three-screen array in the dash of Fisker’s Emotion concept, and excruciatingly well-connected head units from Sony and Panasonic. So there’s a lot going on with big-screen interfaces these days.

What to make of it all? The most generous interpretation, frankly, is that the more far-out stuff is all just marketing B.S.—that the MoodRoof and Byton’s gleaming ribbon of digital eye-candy are run-of-the-mill playful concept-car wishful thinking that won’t ever see the light of day, whether because customers just don’t want to pay for that stuff or it proves somehow impractical. But whereas most auto-show concept cars are explicitly pegged as mere ideas, all the above technologies came to Vegas freighted with actual dates. Think 2019, 2021, 2022—too soon to be seriously intended for mere amusement in future autonomous cars.

That leads us to the least-generous interpretation:

All this crap is going to kill us.

First, a disclaimer: We at The Drive love groovy animated display graphics as much as the next car-nut, and our goal here is not to pee on anybody’s MoodRoof. But human interfaces in moving vehicles need to be rooted in some form of actual science—something that indicates whether one strategy or another is actually the best for operators of fast-moving, human-carrying machines driving through neighborhoods and down highways. Problem is, according to at least one very well-placed authority, that’s just not the case with any of the elaborate new displays being trotted out by automakers and visionary tech companies. In fact, the science says quite the opposite.

“It’s an issue of convenience versus safety,” said Debbie Hersman, president of the National Safety Council and former chairman of the National Transportation Safety Board. “Large flat screen designs require so much attention researchers say most should not be operated while car is in motion.” She's referring specifically to a study released in October by the University of Utah that found that the infotainment systems in most new cars pull attention away from driving for so long, they practically invite serious accidents.

“This is troublesome because motorists may assume that features that are enabled when they are driving are safe and easy to use,” psychology professor David L. Strayer said when the study came out. “Greater consideration should be given to what interactions should be available to the driver when the vehicle is in motion, rather than to what features and functions could be available to motorists.”

His ultimate point is that nobody is regulating what the manufacturers are doing—a notion Hersman agrees with, noting that it’s “like the Wild West out there” in terms of automakers letting the market determine how systems should work, rather than independent research. The irony is that they’re not even talking about the future systems with streaming content and assorted dynamic displays—they’re talking about the infotainment systems currently available. Common sense alone will tall you that most of the future systems described above absolutely pose even greater distraction risks. Byton may say that the streaming-content capability in their dashboard-wide digital display is only for the passenger to enjoy, but guess what—when it’s playing and the driver can see it, he or she is going to end up watching, too. That’s just human nature.

Humans are perfectly able to sneak glances at head-unit displays and navigation systems while operating moving vehicles, but persistent distraction while driving is a legitimate threat. We’re many decades away from actual hands-and-brain-off autonomous driving, so these sorts of big-screen diversions are premature by precisely the same amount of time.

2018 Lincoln Navigator Graphics are Beautiful
The Drive
MORE TO READ