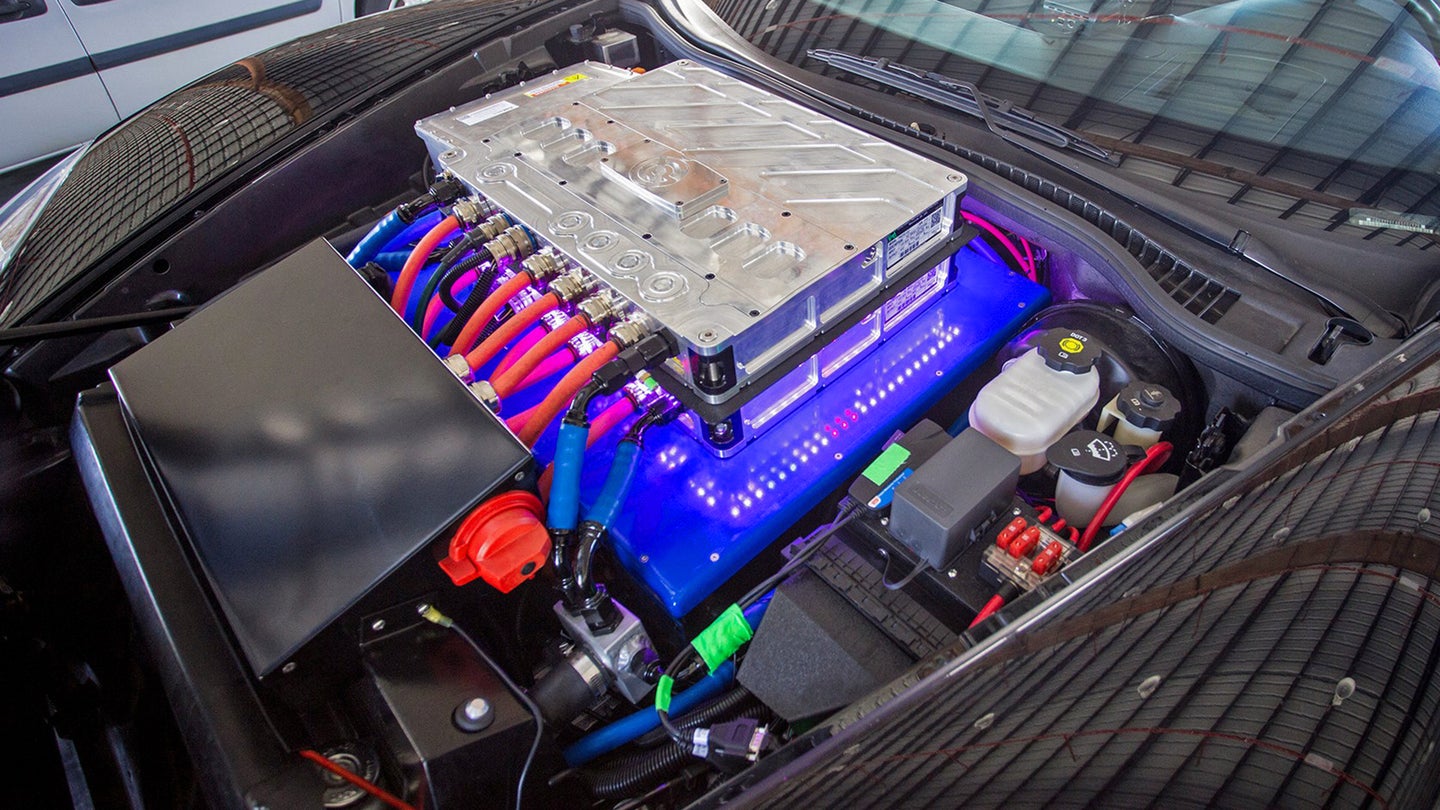 Car culture was built on the backs of tuners and tinkerers, the diehard automotive enthusiasts who, for more than a century, have been willing to swap out engines and transmissions and body parts for stronger, lighter, more powerful upgrades—or in more recent times, even just tweak onboard computers for more turbo boost than the manufacturer might have thought prudent. Cars, after all—even the sportiest of them—must still tow the line on economic, efficiency, longevity, durability, and safety when they leave the factory. Why not dig in a bit once it’s yours, even if it means giving up a bit of something the carmaker or government would rather you have to feed your need for speed?

But with the coming age of electrification, is the juice that fuels tuner/hot-rodder/customizer culture about to vanish? After all, electric and hybrid cars are complex black boxes that would scare off even the most committed gearheads. Their motors—dense, sealed cylinders buried deep in the machines—possess no discernible entry point or remotely tweak-able appendages. Batteries present terrifying challenges to anyone without an electrical engineering degree—and rightly so. What’s a wrench looking to dial in quicker acceleration from an electrified ride to do?

At first glance, not much. When I asked a Honda representative at the Los Angeles Auto Show about the potential for owner enhancement of electrified vehicles, the typically tuner-friendly company was—predictably, perhaps—decidedly cautious, despite the rabid car culture that surrounded the Southern California venue.

“We recognize and appreciate that people want to personalize their vehicles, and we don’t expect that to change as more vehicles become electrified,” said Chris Naughton, after consulting with colleagues on the clearly sensitive matter. “That is why we offer a full range of accessories to help personalize vehicle appearance and, depending on the model, a variety of driving modes to suit the mood or need of the driver.”

That said, he then definitively discouraged monkeying with the carmaker's machines in any fashion not developed or endorsed by the company itself, particularly with respect to electric powertrains. “Working with high voltage electrical systems in modern EVs can be very dangerous, with potentially deadly consequences if certain service procedures are not followed precisely,” Naughton said. “Thus, the stakes can be much higher modifying an electric vehicle versus modifying a traditional vehicle, and these risks should not be taken lightly.”

But if owners or even professional aftermarket tuners were to try and climb into an EV’s powertrain to monkey around, they’d likely have a tough time figuring out where to even start. Today’s electric vehicles no longer simply have electric motors in place of the engines and batteries where the gas tank used to be; they’re fully integrated in ways that internal combustion vehicles simply never have been. In the new Audi E-Tron SUV, for example, the Quattro all-wheel-drive system alone taps very specific elements of battery, suspension, and motor capability to fine-tune its off-road scrambling and on-road handling.

“Such powertrains are very hard to mess with,” said Audi engineer Michael Wein, project manager for the electric Quattro system. “You can’t just boost the turbos anymore or put in new gear ratios. They have to be fit precisely to the right battery and the electronics of the motor itself, and all the thermal management systems factor in, as well. It’s nearly impossible to turn this system because it’s really, really complicated.”

He notes by way of example that in internal combustion vehicle programs, each system could be developed more or less independently—but in an electric vehicle, the battery, motor, cooling, chassis, transmission, and electronics, and even the suspension, are all developed as a complete package in a single, very large team. The resulting systems work much faster and in complete harmony with each other—and are in fact already engineered to maximize performance as much as possible. After all, the Tesla Model S P100D electric sedan can accelerate to 60 mph in less than 2.5 seconds, the Audi E-Tron can fully disable its traction control to unleash some legitimately good drifting capabilities, and the Jaguar I-Pace can shred racetracks in the morning then tackle gnarly off-road ascents in the afternoon.

On the other hand, we’ve been monkeying with machines since before the Industrial Revolution, so to think that whole line of human desire might grind to a halt simply because we’re transitioning from cylinders and gasoline to magnets and electrons is ridiculous. Just ask Andrew Saul, founder of Genovation, a Rockville, Maryland-based company that caused a stir at the Los Angeles show with its all-electric Corvette conversion. That 200-plus mph car mates dual electric motors with a conventional, stock seven-speed manual transmission, and multiple battery packs distributed throughout the chassis. He scoffs at the idea that EVs are either untouchable or, more critically, boring.

“My vision for the future of electrification is that it’s going to be fun,” Saul said. “People see this car and are amazed that you can have an electric car with a stick. That’s been extremely gratifying for our team.”

While he acknowledges that many systems, such as in the aforementioned Audi, will be difficult to penetrate, that doesn’t mean you can’t swap components or get creative to fashion a fully customized vision. “It is going to be tricky, because there’s not a lot you can do with a stock system and not many ways you can soup up an electric motor,” he said. “But you can reduce weight to help with braking, handling, and acceleration, and you can change the gear ratios and other parameters, and use higher performance tires for better acceleration and handling.”

The real success, he argues, will come with more deep-tissue approaches that capitalize on the new capabilities brought by the EV revolution. His electric Corvette, for instance, will soon have the ability to instantaneously change performance profiles to ones developed by professional race drivers. For instance, you’ll be able to experience the setup Emerson Fittipaldi developed for the Laguna Seca racetrack, choosing one that most closely matches your current driving environment or preferences. Even more accessibly, many EVs are already starting to come embedded with granular controls of such things as regenerative braking, such as in Honda’s Clarity plug-in hybrid. Though in some respects cryptic to the average owner—and not exactly appearing in the kind of car the import-tuner crowd would go nuts for—its paddle-based braking adjustment system and modulation of the hybrid powertrain does answer many enthusiast driver’s desire for a degree of controllability. As that thinking trickles over to other models, it’ll go a long way toward scratching tuner itches.

That still won’t fully feed the bulldog, though, and modders will inevitably go as deep as they can to achieve the performance they crave. In some ways, this will simply be an extension of what we’ve already mastered: hacking the ECU, the process in which the car’s firmware is tweaked by individuals or aftermarket companies to boost performance. Audi’s Wein noted that even when it comes to full EVs, “where there’s a will, there’s a way,” and a Jaguar engineer echoed that sentiment.

“Anything is possible, particularly as we move toward a more software-driven world,” said Dave Shaw, the chief product engineer for Jaguar Land Rover who oversaw that development in the company's sporty and highly off-roadable I-Pace electric crossover. “Especially if you understand the way the cars or their systems are integrated, the possibilities become endless, really.”

Though the company doesn’t recommend such modifications to its own vehicles, Shaw spoke generally about EVs and the relative ease with which a knowledgeable tuner could dial performance parameters up or down. “As long as you have the battery, the capacity, the current, and the cabling to move one to the other, you can quite literally just ask for more amps to make the car go faster or dial it down to make it more efficient,” he said. “It’s a lot easier than balancing fuel and air mixture ratios. You are governed by the laws of physics, of course—cable sizes, cell characteristics—but you have the flexibility to chip away at the parameter you want to sacrifice, whether its durability, reliability, or something else.”

Hardware modification will be harder, he adds, noting that electric vehicles are engineered very tightly to maximize interior space—but even there, “everything seems to be getting smaller,” so a creative tuner could in the future swap in new or more powerful or more efficient components that will do more with the space originally allotted in the vehicle. For an example of this, consider Orbis Wheels, a California company that has developed a “ring-drive” wheel for the new, already-sporty Honda Civic Type R. This system replaces the undriven rear wheels with a pair of motor-driven rims that provide an additional 50 horsepower and 70 pound-feet of torque to the car’s own 306 hp and 295 lb-ft. Though the system adds 180 pounds to the vehicle weight, the unsprung weight—that of the wheels themselves—is unchanged, since most of the hardware sits in place of the rear seats.

Of course, beyond those ring-drive motors, the Type R is a fully gasoline-powered machine—and this aftermarket hybridization strategy is just one way such a system can be deployed. It coul be used on other hybrids and EVs, as well, boosting their power and performance similarly—and signaling yet again that the future of electrification may be as bright for tuners as anybody else.

From Audi to Tesla, Car Companies Are Making Consumers Pay for Tech They Can’t Use Yet