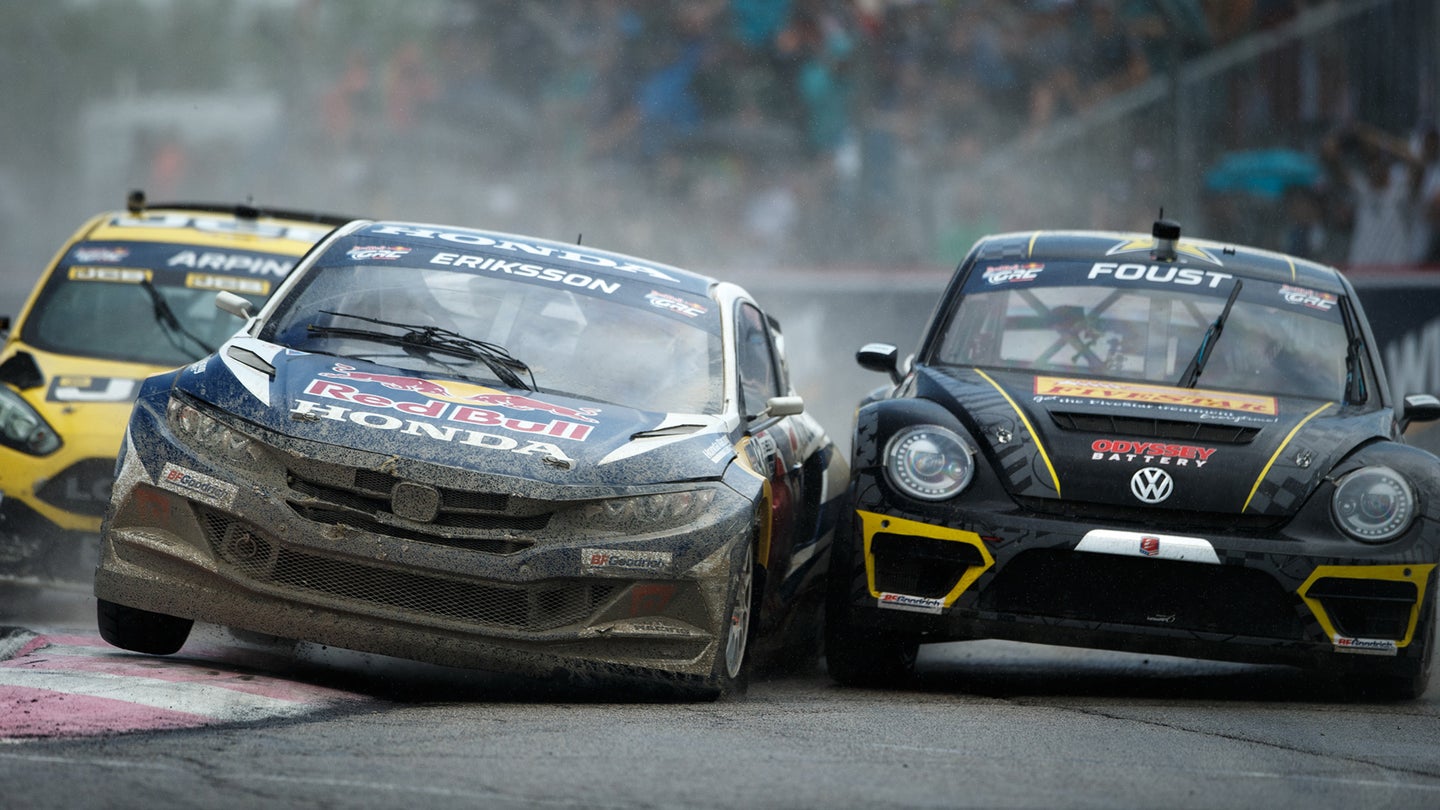 This coming weekend—Memorial Day, in the United States—is arguably the most prestigious one in all of motorsports. On Sunday, you can watch the Monaco Grand Prix—followed just hours later by the Indy 500. These races are steeped in tradition and pageantry. Collectively, they have almost 200 years of racing history. The winners of these two evets will be forever remembered as legends.

But sometimes, all that pomp and circumstance gets in the way of the true reason people race. Sometimes you just need competition, mechanical fury, at its rawest level. Case in point: The final race of the Red Bull Global Rallycross, or GRC, Lousiville, Kentucky event last weekend.

If you aren't familiar with GRC, here's what you need know. The series was born from the X-Games and had its first full season in 2011. Much like Rallycross that got it's start in the late 1960s in England, the tracks are a mixture of tarmac and dirt. GRC features a short track with a jump and "joker lap" short cut that drivers must take once during the course of the race. The race weekends consists of a series of qualifiers, heats, and semi-finals to determine the runners and order for the final race of the weekend.

The manufacturers running in the series are Volkswagen, Ford, Honda, and Subaru. The cars are start life as the same ones that you can buy in the showroom, but undergo some serious modifications to convert them into 600-horsepower all-wheel drive track monsters that can do 0-60 in 1.9 seconds. The cars are set up to handle jumps and withstand contact from the other cars. And oh, there is lots of contact.

The dominant cars over the six seasons have been Ford Fiestas and Volkswagen Beetles. (Yes, there's a 600-hp all-wheel drive Beetle in the GRC.) Scott Speed and Tanner Foust have each won two of the six driver's titles in the series history. The tracks can be set up anywhere, using part of an existing circuit or laid out in a parking lot.

Which brings us to last weekend's Louisville round of GRC, held in the parking lot of the Kentucky Exposition Center. The two semi-final races were action-packed, but it was the final race of the weekend that is the most exciting 10 laps of racing you'll see all year. While conditions had been damp for the semi-finals, the rain came in force for the main event.

Rain...on a track that is part dirt...with a jump...in a parking lot...being driven on by 600 hp all-wheel drive cars. 10 laps of primal racing that ends in a photo finish. It doesn't get much better than this.

You can watch the two semi-finals and final race below. It'll only take 20 minutes to watch all three. If you are short on time, the final race starts at the 12:20 mark and takes all of six minutes. Enjoy.