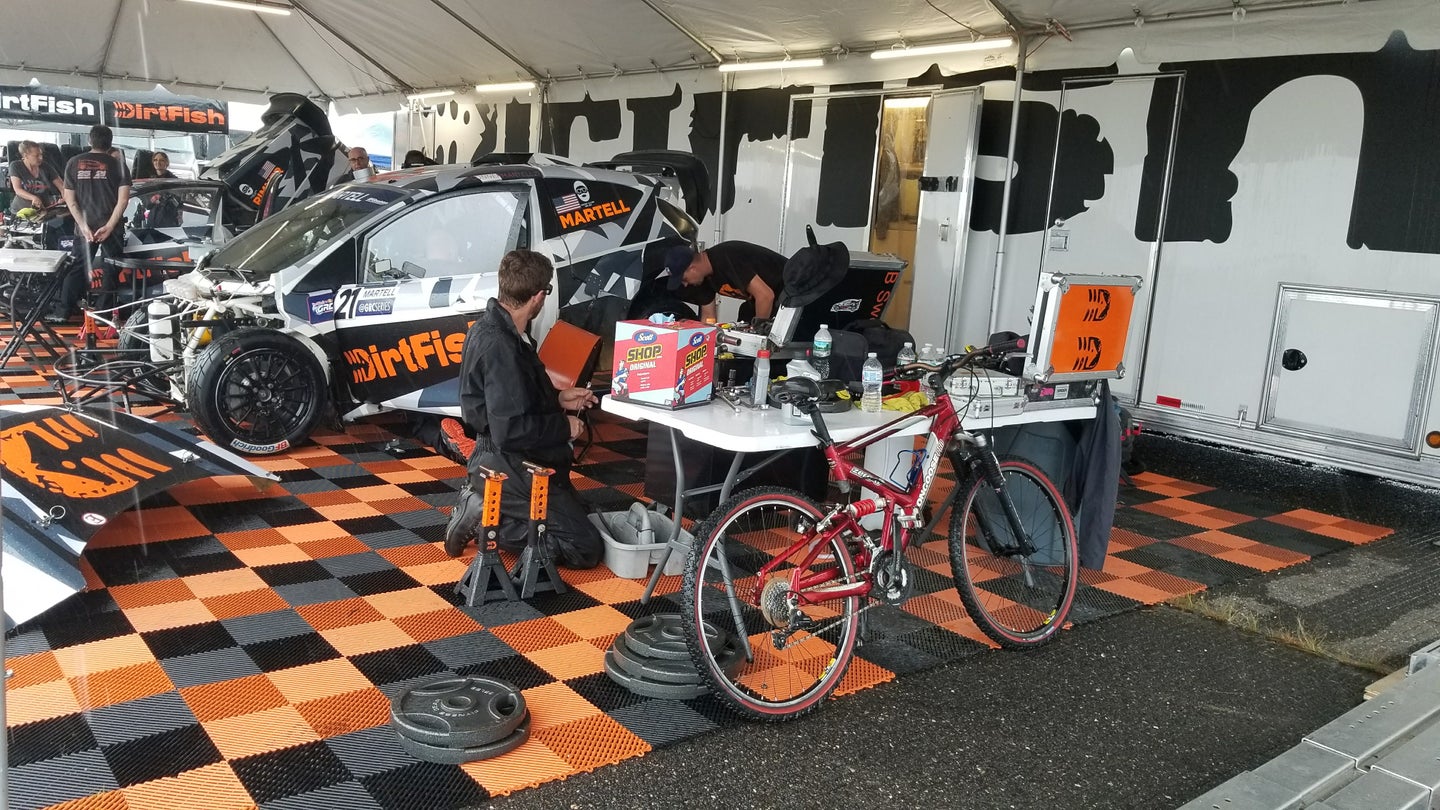 They are known by many names: pit crew, paddock crew, techs—to name a few—but no matter what you call them, these are the folks who get race cars ready for war, and allow the drivers to give us a show, come what may.

I recently attended Red Bull Global Rallycross Atlantic City, where I spent a majority of my time watching the crews fix issues and meet seemingly impossible race deadlines. Global Rallycross is a contact sport. If NASCAR goes by “rubbing is racing,” than Global Rallycross goes by “bumping is racing.” Putting the cars to work in Rallycross means constant body damage and broken suspension components—and, this weekend, even breaking wheels clear off the hub. Teams are always tweaking car settings in between heats, like Tanner Foust's Volkswagen crew, below.

Red Bull Global Rallycross also has a Lites feeder series. The techs working on the cars are not "Lite level"—they deal with the same insane amount of damage and issues.

Teams such as the Vermont SportsCar Subaru Rally Team have to make on-the-fly suspension adjustments between heats. Sometimes these adjustments have to be done in less than 30 minutes.

Day 1 of the weekend was rainy, so that meant the dirt section would be a mud section, and that's where the Subaru crew got crafty. They cut up some circles of plastic and zip-tied them to the wheels to keep as much mud as possible from gumming up the works.

To give you an idea of the kind of destruction teams have to deal with, consider that due to the wet conditions Tanner Foust hydroplanned his Volkswagen Beetle into the curb, when it hit it sheared off every spoke on the driver's-side wheels of his car.

This caused the Safety Team and Foust's crew to get crafty to get the car into the paddock.

Day 2: the Subaru team had their own damage to deal with on Patrick Sandell's car.

Broken suspension is part of the game for teams in GRC.

Between heats the crews just hope the cars come back in one piece, like Steve Arpin's race car, but as you can see on the side, contact happens pretty much no matter what.

Being part of a pit crew is a constant combination of fight, negotiation, pleading, cajoling, and encouragement to get these cars ready for the show—and to keep them running during the spectacle. They have to pull, yank, break off, and replace parts left and right. Next time you visit a race series, whether it is Global Rallycross, IMSA, Indy, or even Formula Drift, be sure to visit the paddock to get a behind-the-scenes view of what it takes to get the cars race-ready.