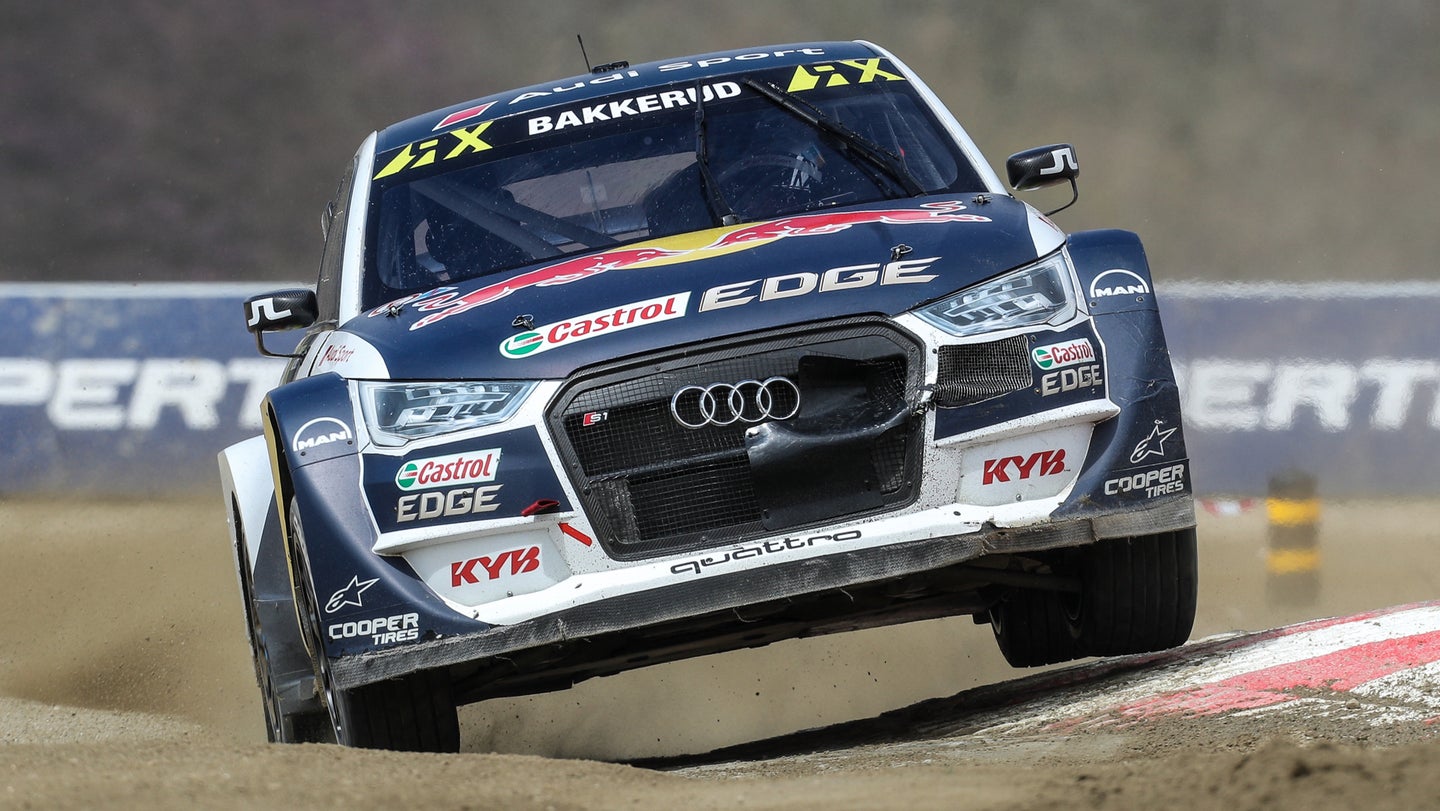 In many ways, rallycross feels like the ideal sport for electric vehicles. Qualifying rounds and races are short, snack-size affairs far removed from any concerns about range anxiety, for one. Yet it's been an uphill battle for rallycross promoters to get manufacturers to actually sign onto the idea of racing electric cars in the top classes of rallycross.

Top-level rallycross has been mulling over the idea of an electrified premier class for a while now, to mixed results. World Rallycross' former closest competitor, the then-American-based Red Bull Global Rallycross series, originally planned to add a separate series for electric cars by 2018. However, that incarnation of GRC shut down before its 2018 season began amid allegations of unpaid bills and a lawsuit against longtime series participant Subaru.

You would think that the loss of a competing series with high aspirations would have essentially gifted the rallycross market to the World Rallycross Championship. It was already the FIA-backed world championship for the sport, and its promoters even started a new Americas Rallycross series that attracted many ex-GRC competitors from North America.

Yet the uncertainty over when World Rallycross planned to switch to electric cars seems to have been its undoing this year. The FIA World Motor Sport Council approved World Rallycross' plans to switch to an all-electric top class for the 2020 season back in June 2018, but getting marques and teams to sign up for this EV switch has been a constant struggle.

The 2020 switch to becoming the FIA Electric World Rallycross Championship initially sounded a lot like the tightly controlled early seasons of Formula E. Everyone would run a shared Oreca chassis and batteries made by Williams until 2023, and cars would have two electric motors producing a combined 500 kW, per E-Racing 365. Powertrain rules were based loosely on those used by Formula E, with some extra restrictions in the name of keeping costs down.

Yet perhaps World Rallycross should have paid more attention to Formula E, where major auto manufacturers didn't join in en masse until the series ran for a few years, at which point Formula E's rules opened up to allow manufacturers to use their entries as a showplace for more of their own EV tech.

By August 2018, World Rallycross was already pushing back its EV switch to 2021 to give manufacturers additional development time ahead of the switch, according to an FIA press release. Manufacturers were given until March 29, 2019, to confirm their commitment to the new electric format.

Those commitments never actually panned out.

Ford's works Hoonigan team was the first major effort to bail on World Rallycross after the 2017 season, with driver Ken Block noting in a press release that so much of the sport was "up in the air." While Ford continued to offer some support to the Olsbergs MSE team in the 2018 season, the marque's attitude to jumping back in with another factory team became that of "wait and see."

Audi confirmed in August of last year that it would not be campaigning an electric rallycross car in 2021, and dropped its factory support of EKS Sport after the 2018 season. Head of Audi Motorsport Dieter Gass explained to Autosport that DTM offered a better return on their motorsport investment:

We are involved in Formula E so we already do have a program in electric motorsport, even though we were very interested in the EWRX. It came very much down to a choice between DTM and EWRX.

For us, as a return of investment and the broadness of what we cover in terms of [internal] combustion traditional motorsport and electric motorsport this was the better compromise.

Mind you, that decision comes after DTM lost longtime mainstay Mercedes-AMG to Formula E. Audi's former factory team EKS Sport is still on the entry list for 2019 but has been scaled down from a two-car effort to just one.

Peugeot then announced in October that it was ending its factory involvement in World Rallycross after the 2018 season, specifically calling out the uncertainty over World Rallycross' planned switch to electric vehicles.

The former factory Team Peugeot Total is on the entry list for this year as Team Hansen MJP, however, as the two-car team has opted to continue racing in World Rallycross without factory support.

Next to bail from World Rallycross' top class in 2019 was Olsbergs MSE, who announced it would be taking a break from the Supercars class in October. The team, who notably provides all the cars for World Rallycross' second-tier RX2 championship, cited the need to plan ahead for the 2021 class changes as well as a need to keep development costs manageable, according to Autosport. It was also looking for a manufacturer to partner with, and it voiced its support for the EV change, even if that meant it must take a year off from the top class.

"We are also very much looking forward to the arrival of electric rallycross in 2021, and as such will put our efforts next year into securing a manufacturer partner ready for its introduction," Olsbergs MSE Team Principal Andreas Eriksson told Autosport. "We think the electric switch is important for the future of the sport—and for all the young drivers out there dreaming to be the best in the world."

Finally, the PSRX Volkswagen Sweden team withdrew from the series in December due to the lack of competition left. "It’s really sad, but the declining numbers of teams in the series makes it impossible for us to remain for 2019," team principal Pernilla Solberg told Motorsport.

In the past two years, the competition in WRX between the cars from Audi, Ford, Peugeot, and Volkswagen has been huge, resulting in fantastic sport with close racing between some of the most famous drivers in motorsport.

Unfortunately, with the exit of three works or works-supported teams from World RX, the situation has changed dramatically.

Together with PSRX and Volkswagen Sweden, we had to re-evaluate the involvement in the championship.

We certainly didn’t take the decision lightly, but we came to a mutual agreement not to continue in WRX in 2019 as there is huge uncertainty regarding the entries and the competition for next season.

Both Volkswagen and the team told Motorsport that they're still interested in World Rallycross' future move to electric cars, but it's very clear that they don't want to be the only team competing.

Audi, Volkswagen, and Peugeot were the three marques most expected to join in World Rallycross' new electric top class, Autosport notes, but all three marques have withdrawn from the 2019 season. In fact, there are no works entries at all on the 16-car 2019 full-season entry list. While there are still teams who are dedicated to World Rallycross and plenty of returning drivers I'll want to watch, this is a bad sign, as series rarely thrive without the added financial support and credibility of manufacturer participation.

That brings us to this week's announcement, which feels far overdue. The new Projekt E series is set to run on the same weekends as traditional, internal-combustion-powered World Rallycross cars, but will be its own thing. This frees top-class participants from the stress and uncertainty of having to develop this whole new spec of electric rallycross car unless they really want to.

Torben Olsen, the managing director of World Rallycross for its promoter IMG, admitted that a lack of buy-in from manufacturers was ultimately what forced the series to backtrack on the idea of an all-EV grid in the series' announcement:

In terms of the strategy for introduction of electrification to rallycross, we have been in discussions for nearly two years with a number of manufacturers. Ultimately it emerged that the manufacturers were not yet ready to commit in sufficient numbers to make a fully-electric World Championship a reality. However, we believe that Projekt E is a positive step forward to deliver on our 2017 pledge.

Had there not been all of the uncertainty over an impending EV switch, there would have been no reason for key teams and manufacturers to leave the series, even for a brief hiatus. Marques unwilling to sign on, or needing more time to evaluate their motorsport plans should have changed the course of World Rallycross' electrification plans much earlier before they ended up with a season that The Checkered Flag refers to as "a post-manufacturer era."

To make matters worse, the series has already been moving away from fan-favorite venues like Lydden Hill and Estering, and already unveiled a 2019 schedule two rounds shorter than last year's. While the U.K. move allowed them to have a large, festival-style event at Silverstone, the moves away from traditional rallycross venues haven't sat well with everyone.

It's hard not to feel like World Rallycross is a contender for the largest wiener-step of 2019, despite the fact that it's only April. It was pretty much the only truly big show left in rallycross last year, but instead of using that year to solidify its place as the world championship for rallycross, the series spent most of 2018 through just now clinging to electrification plans that ultimately drove away interest.

That being said, the fact that World Rallycross still has a full grid of 16 full-season cars that includes longtime ex-manufacturer teams means it's not a lost cause. I'm interested to see who steps forward to participate in Projekt E now that it's not the replacement for the top Supercar class, and will gladly tune into anything that sends a car sideways through the dirt and over sweet jumps.