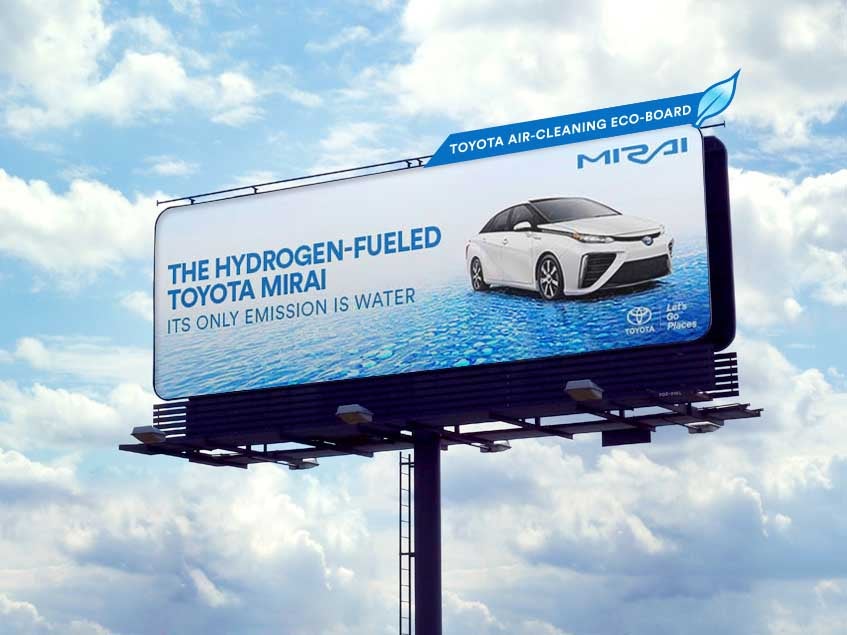 In a new advertising campaign for it's hydrogen fuel cell car, the Miria, Toyota is placing pollution reducing billboards in California. A titanium dioxide coated vinyl on the billboard acts much like the catalytic converter in a car. Using light, humidity, and wind, the coating on billboards reacts with nitrogen dioxide (NO2) in the air. The reaction removes the nitrogen, leaving the oxygen behind. NO2 is a an extremely harmful pollutant, contributing to a number of respiratory ailments, such as asthma. It is also one of the causes of acid rain. One of the major contributors to NO2 in the environment is exhaust from gas and diesel powered cars.

Starting April 3rd, 37 of the "Eco-billboards" will be placed in Los Angeles and San Francisco for an eight week run. Toyota says this will offer "24,960 square feet of pollution scrubbing surface and reverse the equivalent of 5,285 vehicles worth of nitrogen dioxide (NOx) emissions per month." The billboard vinyl was created by PURETi Group, who hopes other advertisers will use the eco-friendly material. Toyota recently showed off the titanium dioxide coated vinyl by wrapping a Miria in it at the Environmental Media Association Impact Summit.

Though this is a wonderful, forward-thinking technology. there are some questions. What happens to the billboards when they come down? Nitrogen by itself is perfectly fine and quite useful. Is there a process in place to reuse or recycle the coated vinyl? Can the nitrogen be extracted and used for anything? These aren't concerns, just questions. I have reached out to PURETi, and will update this article with any reply I receive.

Glen Finkel from PURETi responded to my questions (in italics). Here's what he had to say via email:

Are you able to separate out the titanium dioxide to be used again?

"No and that's not necessary. PURETi is very efficient and applies a very tiny amount of titanium dioxide.

What happens to the nitrogen?

"NOx, an indirect greenhouse gas and a key ingredient in the formation of acid rain and smog, is reduced through the catalytic process to a small amount of relatively harmless nitrates that get washed off safely into the ground."

The tech company is giving Toyota the first crack at its Internet-connected car patents.