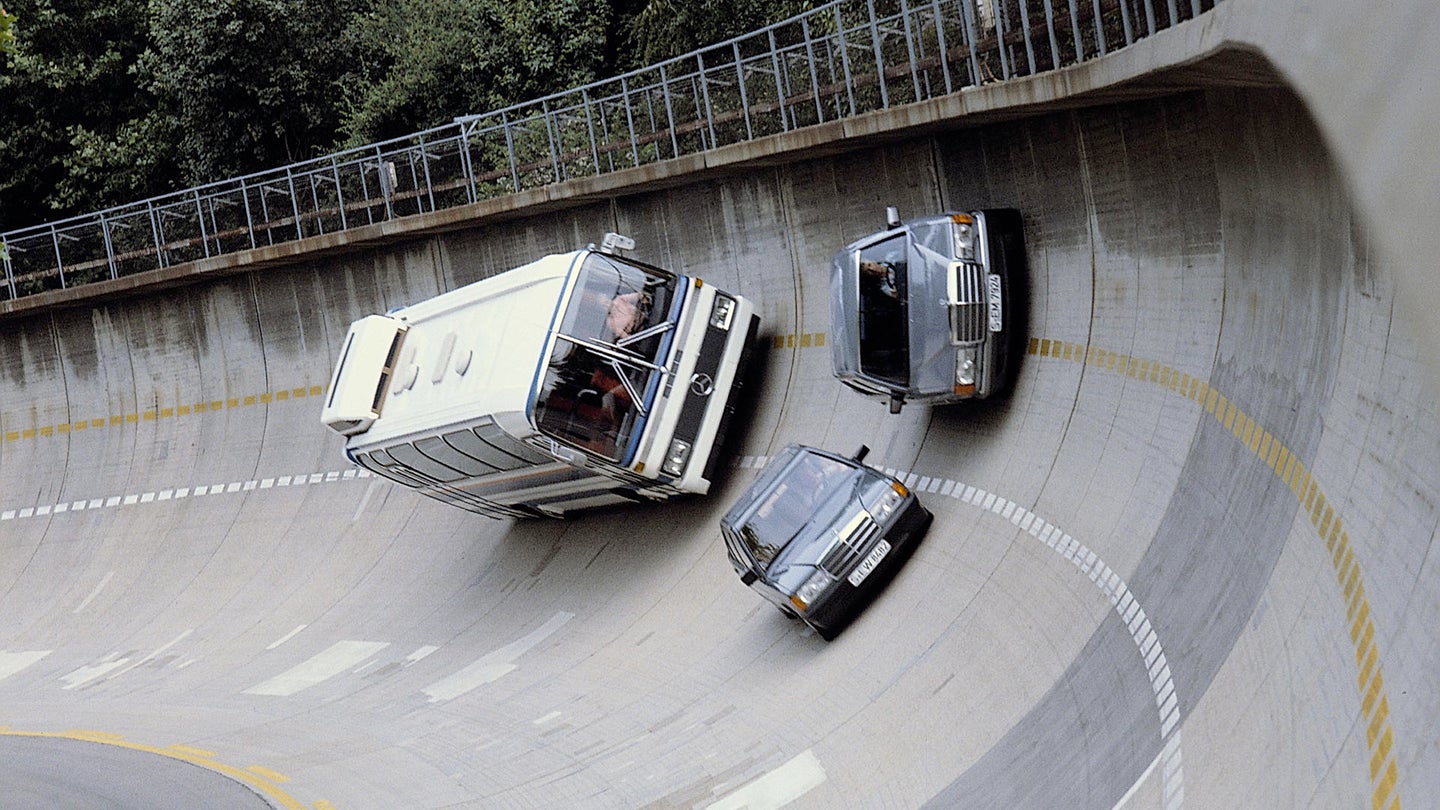 Manufacturer test tracks are playgrounds for both engineers and enthusiasts alike, with sections to simulate nearly every conceivable road condition—and push their cars to the limit and beyond. Given the work-in-progress nature of the new models being tested they're usually off-limits to the public, but some are so unique they manage to capture the collective imagination of the automotive res publica. General Motors has its collage of famous corners at the Milford Proving Grounds, and Volkswagen rocks a five-mile straight at Ehra-Lessien, but Mercedes-Benz wants you to know its iconic 90-degree banked curve is still alive and kicking as it celebrates its 50th birthday this year.

By the mid-1950s, things were looking up for European automakers as the continent recovered from World War II. Mercedes-Benz in particular had a good little business going between the sublime 300SL, their dopey little Ponton cars, and a whole range of commercial vehicles that helped power West Germany's new economy. But as their ambitions increased along with their product lines, Daimler executives realized that they lacked a central one-stop testing facility that could handle every car and truck they produced. After receiving approval to develop an oddly-shaped sliver of land shoehorned between the Neckar River and one of their plants in Stuttgart, Mercedes opened the first iteration in 1957.

While that skidpad and its concentric circles of different road surfaces is undoubtedly very nifty, that was basically the extent of it, and Mercedes engineers soon realized they needed a much more comprehensive setup to fully vet the new models that were already in the pipeline by the late 1950's. After almost a decade of development, the updated facility was revealed to the public in the spring of 1967, featuring high-speed straights, new rough-road tracks, a crosswind simulator, steep inclines, and of course that insanely-banked curve, totaling almost 10 miles of testing surfaces.

And yes, believe it or not Mercedes-Benz does send its commercial vehicles around that bend. This video shows a bunch of bus drivers riding along for a testing session in the Tourismo K coach, and things look pretty hairy from the inside as it basically goes horizontal on the attempt. Mercedes notes in its press release that once a car gets above 93 mph, the driver can take their hands off the wheel as the centrifugal force keeps the front wheels pointed straight.

For a little reference, the curve at NASCAR's Bristol Motor Speedway only reaches 36 degrees, while this one goes completely vertical at its top. On approach, it literally looks like you're about to drive into a wall. Mercedes notes the maximum speed on the turn is just shy of 125 mph—any faster than that and drivers are at risk of blacking out from the excessive G-forces.

Over the years Daimler has continued to add on to the facility, including new off-road sections and "whisper asphalt" surface to isolate and test car noise, but the bones unveiled in 1967 are still its most recognizable parts.

Take A Lap Around Porsche’s Test Track In Weissach

Every Porsche, whether race car or road car, runs its first tests on this track