The Red Pig: How the Original AMG Ended Up Testing Fighter Jet Parts Before Vanishing

Possibly the most important AMG in history has a wild story. 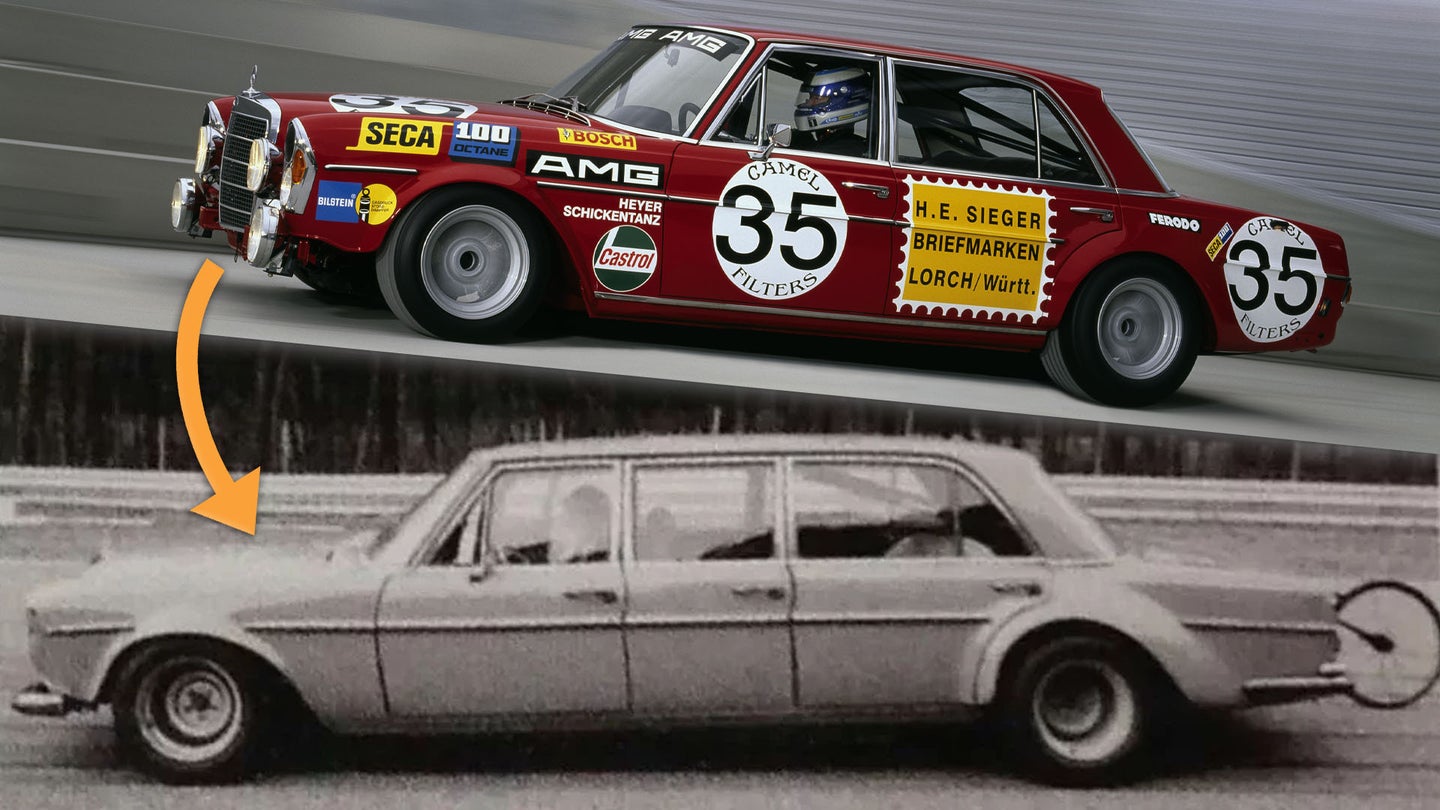 AMG didn't come into this world synonymous with Mercedes-Benz the way it has been for decades now. Their partnership had humbler beginnings in late-1960s touring car racing with an experimental sedan christened Rote Sau, or Red Pig. It hit the racing scene and did better than it had any right to before getting outlawed from competition and taking on a new life in the aerospace industry. But we don't know for sure what happened from there because the original Red Pig hasn't been seen in decades.

Documentation of the Red Pig's history is patchy, but Hagerty indicates it was built at the end of the '60s by the nascent AMG with some collaboration from Mercedes itself, despite the brand's official divestment from racing after the '55 Le Mans disaster. According to fansite RoteSau.co.za, the Red Pig was constructed from a crashed 300SEL 6.3 (possibly using a new shell) to compete in the European Touring Car Championship, which at the time was apparently running a hybrid of Group 2 and Group 5 Special Touring Car regulations.

Long story short, ETCC cars had to be based on real production cars of 1,000 units and retain most of their interiors, including the back seat. They were, however, allowed select weight reduction (in the Red Pig's case, that meant magnesium wheels from the Mercedes-Benz C111), and modest engine enhancements, namely bored-out cylinders and modified heads.

That's what AMG treated the Red Pig to, hollowing out its 6.3-liter V8 to 6.8 liters and tweaking its heads, cams, rods, and crank, as well as plumbing each cylinder bank to separate intakes. The result was a leap from 250 horsepower and 369 pound-feet of torque to a porkier 428 and 448 respectively, which initially traveled to the rear axle through a four-speed auto modified to shift like a sequential manual (though that was later swapped for a five-speed ZF manual). This reportedly gave the big Benz the ability to sprint in its ultimate spec from zero to 62 mph in 4.2 seconds and top out at 165. For a '60s luxury sedan with a full interior and a nearly 3,600-pound curb weight, that's what the farmer in Charlotte's Web would call some pig.

Various accounts state between three to five Red Pigs were built in total and they went on poorly documented record again for an inconsistent racing career. Sometimes, these boars tore through their tires, brakes, and fuel (they apparently got five mpg flat-out), while other times, they out-powered and out-cornered the competition on their air suspension to win races. The Red Pig's most widely renowned result came at the 1971 Spa 24 Hours, where this fine swine went absolutely ham, finishing top hog in its class, and placing second overall, just three laps behind the victorious Ford Capri RS.

"It was an amazing car—enormous with huge speed," remarked Hans Heyer, one of the Red Pig's drivers, to Hagerty. "We had enormous speed comparing to the Capris, but no brakes at all…"

Alas, changes to ETCC regulations would effectively ban the Red Pig, which would be further modified and sold off—in which order isn't clear—to French conglomerate Matra, which in addition to cars made military hardware. Because the sow compounded pounds with power, it was considered the ideal testbed for parts of fighter jets' underbellies, namely landing gear. Few details (or photos) of the Red Pig in this configuration survive, but it was apparently lengthened to fit test rigs and had a hole cut in its floor so a wheel could protrude down at high speed to test landing-like conditions.

Unfortunately, what became of the Red Pig from there is unclear. Mercedes itself tried to track down the original to commemorate bringing AMG in-house in the mid-2000s but was unable to bring home the bacon. It's assumed that when Matra was done with it, the Red Pig was destroyed, fun though it may be to imagine a happier outcome. This does not mean the squeals of the Rote Sau's tires are but echoes in the memories of those old enough to see it race, though. When Mercedes couldn't find the original, it built a pair of faithful replicas, one of which it stores on static display, the other of which it sometimes lets VIPs drive.

So, even though the Red Pig was probably turned into chicharrones decades ago, it can be remembered as a successful matriarch, one whose piglets have gone on to become some of the highest-achieving performance icons of all time—both on the road and at the highest echelons of motorsnout. Sorry, motorsport. Can you tell I haven't had lunch yet? I feel like I'm about to croque, monsieur.

The ex-Prime Minster of Kuwait had polarizing tastes, to be sure.