The miniature engine runs on gasoline, produces less than one horsepower, and revs to 8,000 rpm. 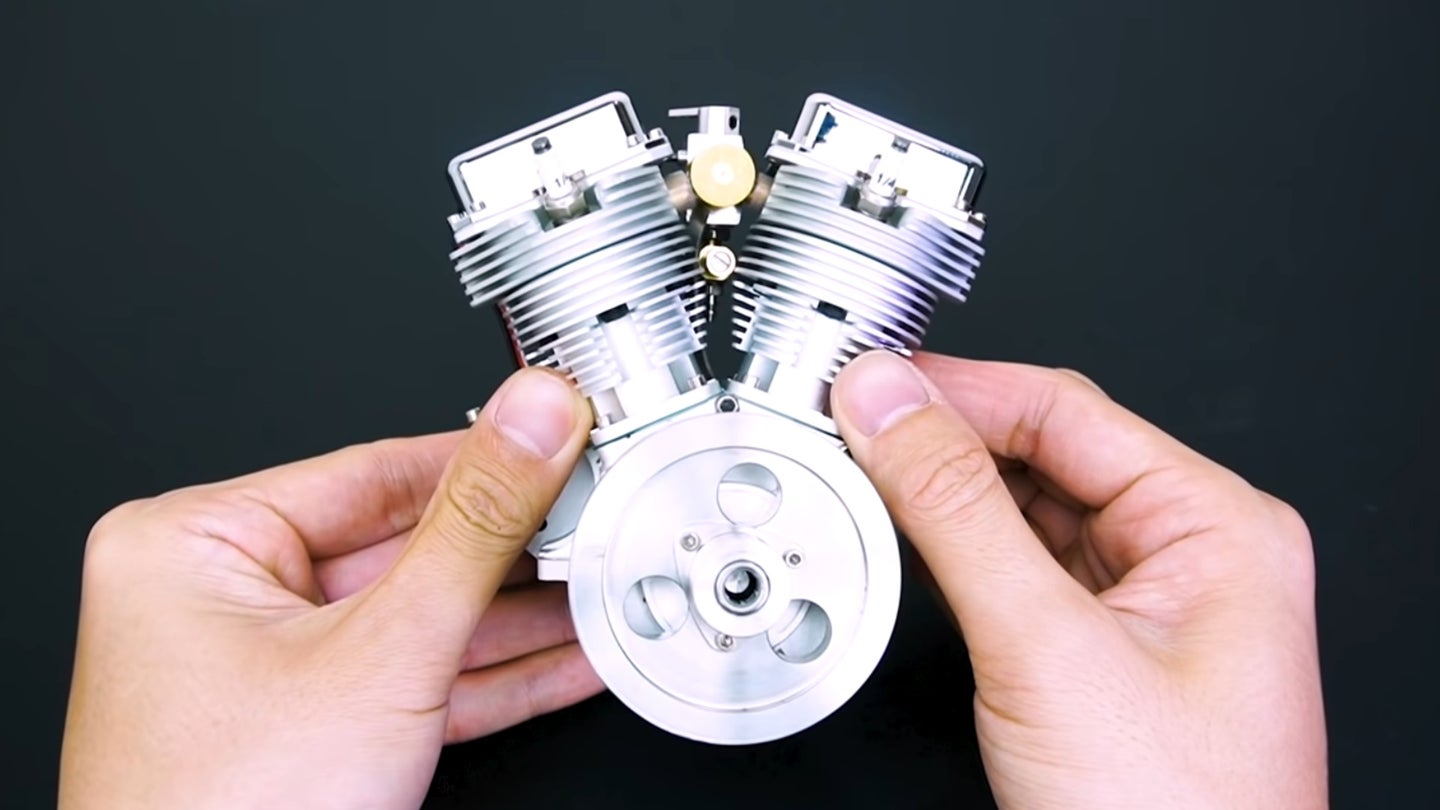 Even if California's enthusiasm for small engines is waning, I'm all about microscopic powerplants. From tiny diesel-powered slot cars to handmade wooden V8s, I enjoy motors that can fit on a desktop. That makes this 9cc V-twin engine with less than one single horsepower incredibly appealing to me.

To be clear, this is a fully functioning engine complete with what appears to be the world's smallest spark plugs. It's a model V-twin called the CISON FG-VT9, and it's offered for sale by a number of retailers. What could you use it for? Well, anything.

Typically, engines such as this—if they have a purpose besides entertainment—are used in model aircraft. This one doesn't seem intended for that sort of use, however. It has a flywheel not designed to fit a propeller, mounting points unlike a model aircraft engine, and its power output—about three-quarters of a horsepower—is on the low side for its weight. It doesn't mean it's not possible to rig up this 3.3-pound engine into the nose or tail of a tiny plane, it just means it's probably not intended for that.

Despite its aeronautical applications being uncertain, this tiny V-twin is still sweet. Featuring a pint-sized carburetor, tiny copper tailpipes, and a redline of 8,000 rpm, it makes all the right chopper noises—just in miniature. Similar to a full-sized Harley-Davidson engine, the FG-VT9 is air-cooled, although it does not feature a proper lubrication system for its valvetrain. In the video below, you can see the rocker arms and timing gears are both simply greased up, while the all-important crankshaft appears to run on a tiny sealed ball bearing.

Besides that, the engine features a stroke of 21mm, a bore of 16.6mm, and it has to be started with a drill, or something along those lines. How much does it cost for all of this palm-sized power? $600, which is actually pretty good all things considered.

It's also worth noting that 45 degrees is actually the ideal bank angle for a V16. So if you're willing to shell out the cash for eight of these things and sort through all of the foibles involved with combining a bunch of little engines together, you could have—for all intents and purposes—a more complicated version of a Briggs & Stratton, but with less torque. Sign me up.

It has a working differential, speedometer, and even brakes.