No, Elon Musk Is Not Dead

But Tesla stock is dipping anyway. 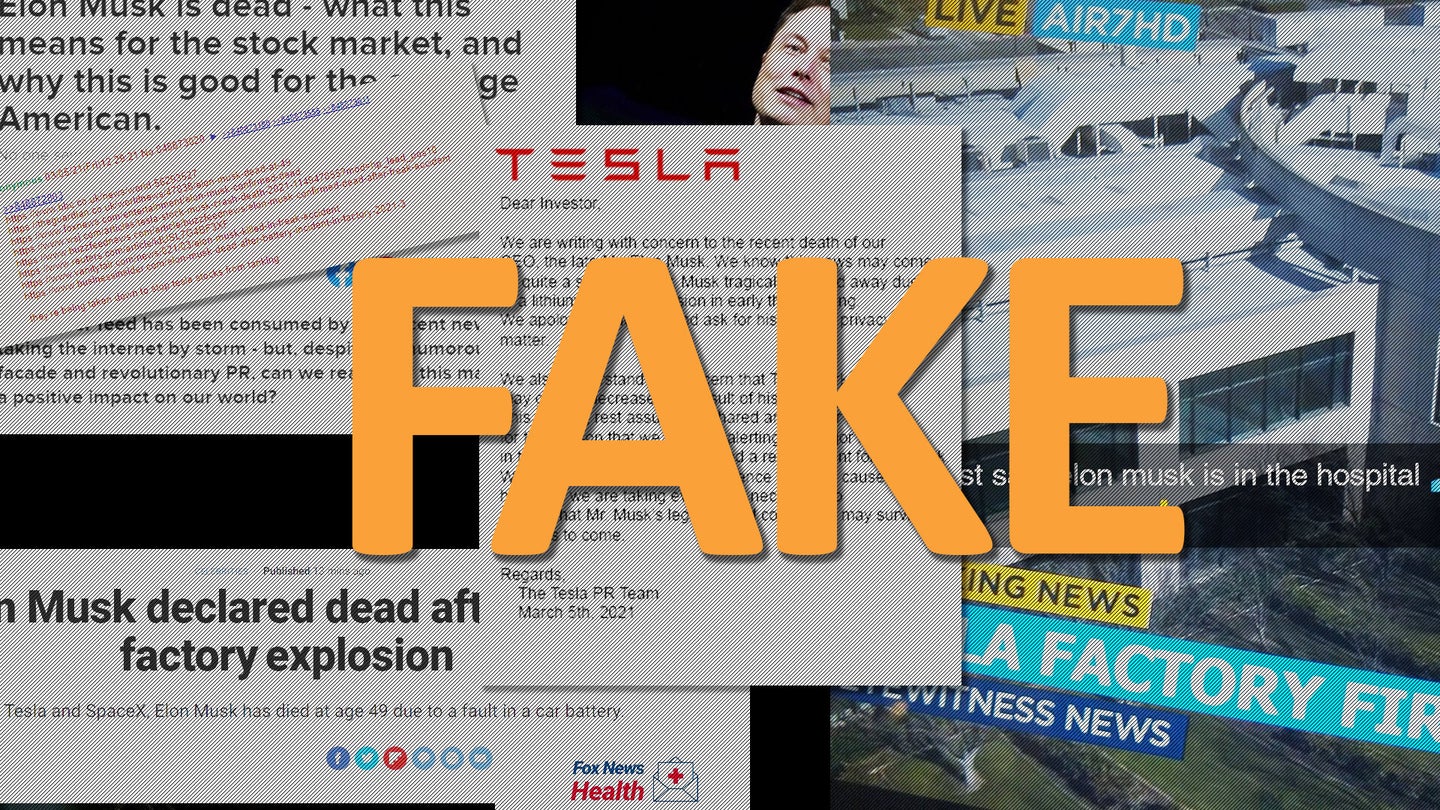 Before we get into the fine details, let's start by clearing something up: Tesla CEO Elon Musk is not dead.

Despite news of the billionaire being involved in a battery explosion trending on Twitter, rumors of Musk's death have been completely fabricated. In fact, the sheer volume of posts on social media and online message boards indicates a potentially coordinated effort to manipulate the company's already volatile stock prices.

News of Musk's death began surging on Twitter as hundreds of tweets from new and low-follower accounts began to flood the hashtag "#RIPElon." These showcased photos of manipulated headlines appearing to have originated from Al Jazeera, Buzzfeed, Fox News, and Tesla-focused news site Electrek. Another falsified image signed by "The Tesla PR Team" (which doesn't exist since Tesla dissolved it last year) also specifically addresses the company's falling stock price as a result of Musk's supposed death.

The first tweet bearing the hashtag appeared at 10:30 a.m. ET and featured a photo of Elon Musk with other deceased celebrities like Michael Jackson, Harry Potter character Snape, Duke (the dog from Bush's Baked Beans), and Harambe. Shortly thereafter, links were posted to Reddit and 4chan which pointed to fake URLs from BBC, The Guardian, Wall Street Journal, Reuters, and more. When questioned about the links not working or posts being deleted from popular Tesla Subreddits, posters immediately began to claim that pro-Tesla investors were actively deleting the news to protect Tesla's stock from falling further.

Within an hour, it fell nearly six percent.

What really sold the bit to so many people was its (almost) convincing execution—accounts replying to others posting the hashtag, the photoshopped headlines, memes, fake tweets from the mother of Musk's child, and even "leaked" images of the explosion. However, given that Musk is one of the richest people on the planet, his death would dominate headlines from real news sources across the globe. You could expect legit statements from Tesla, SpaceX, The Boring Company and more, as Snopes points out, so it's safe to say this is a big yet strangely elaborate hoax.

While in poor taste and almost certainly aimed at manipulating the electric automaker's stock price, it generated enough buzz to gain interest from the public. Even satirical news site The Onion jumped into the mix to retweet an old article about Elon Musk saving an overturned Tesla after being "pinned on top of a child."

Post-split Tesla stock reached its peak high of $883.09 earlier this year on Jan. 26 and has fallen more than 38 percent since, not even slowing as the automaker announced its $1.5 billion investment into Bitcoin. Perhaps the trending news was used to force Tesla's stock further down for a purchasing opportunity—after all, this isn't the first time bad actors have used Twitter (and Musk) for financial gain. Or maybe it's a collective trolling effort just to get a rise from reactions.

Either way, Musk isn't dead, though we do suspect he's getting some amusement from all of the memes.