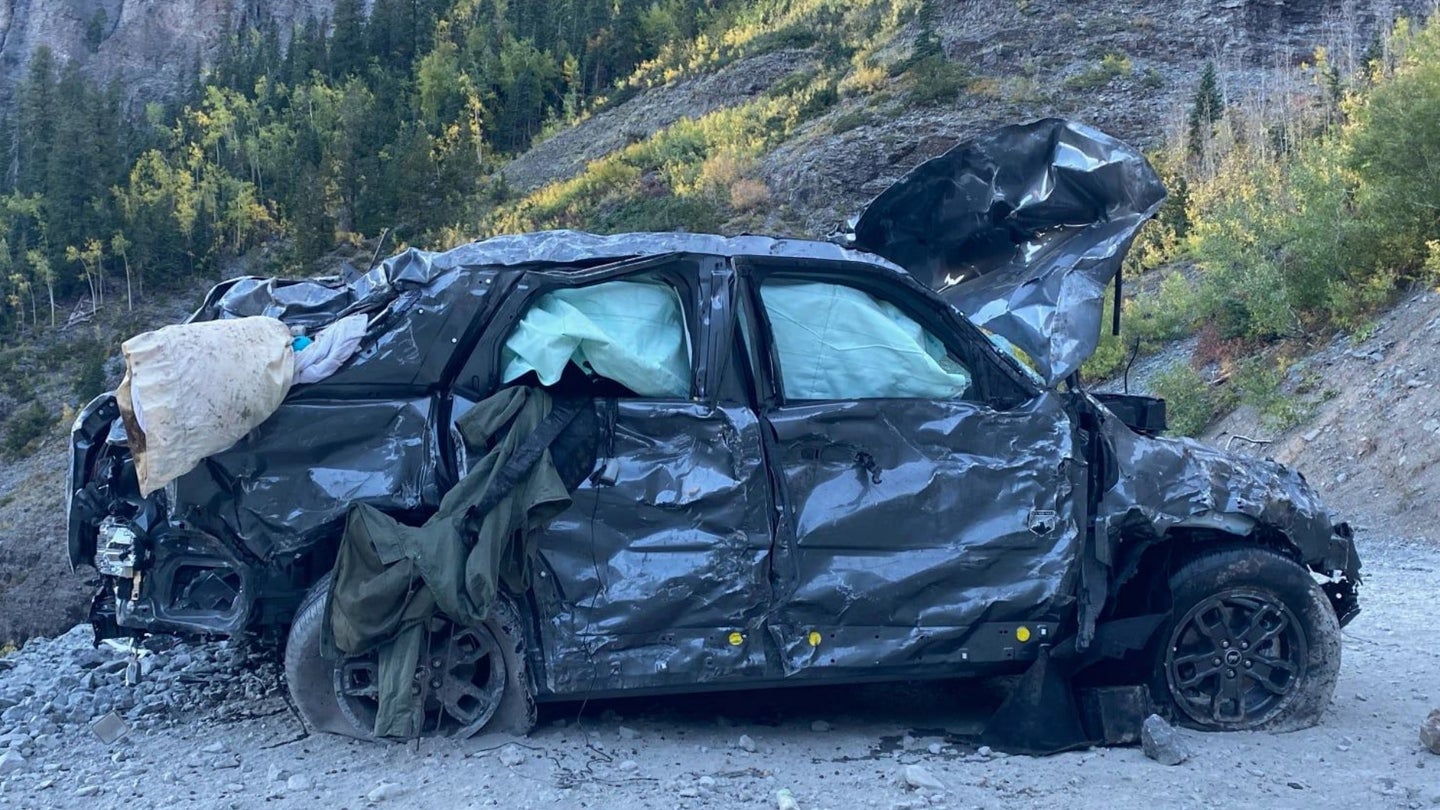 Accidents on Colorado's Black Bear Pass aren't extremely common, but when they do happen they can get pretty bad. We covered one last year that thankfully wasn't fatal but left a passenger seriously injured and a Jeep completely unrecognizable. The trail also has its fair share of close calls, with a Ram pickup nearly taking a dive off the edge not long ago. Now, unfortunately, there's been another accident on the mountain road between the towns of Telluride and Ouray.

A Ford Bronco Sport going the wrong way up the pass took a tumble yesterday morning, rolling several hundred feet until it came to rest. A passenger in the vehicle was seriously injured, and due to the relatively high frequency of accidents lately, the local sheriff issued a statement warning people about venturing along the rocky way. "Black Bear Pass is an extremely dangerous road," San Miguel County Sheriff Bill Masters said. "[It] should only be driven by experienced off-road drivers in appropriate off-road vehicles."

The accident involving the Bronco Sport occurred on Sunday morning when the driver and a passenger went backward up the one-way pass, not realizing it until they reached a narrow portion of the roadway. The passenger left the vehicle to help the driver turn around, but in the process of completing the turn, the vehicle drove up an embankment and rolled over. It fell 400 feet before stopping, ejecting the 23-year-old female driver and a dog in the process. The driver sustained serious injuries and was taken to Telluride Regional Medical Center while the pet sustained minor injuries and is doing fine after treatment at a nearby vet.

Black Bear Pass was closed due to the incident, though shortly after, first responders cleared the area and it was reopened. The Bronco Sport in question also ejected its engine on the way down, crumpling at the front and back but leaving the passenger cell amazingly intact.

Not only is this accident significant for its severity, but it's also noteworthy for what the local sheriff had to say after a rough year for drivers on the trail. In his statement, Sheriff Masters went further than clarifying the treacherous nature of the road. He also reminded people that while Black Bear Pass is public and anybody can drive on it without legal penalty, it's extremely dangerous without a proper rig and an experienced driver.

"Legally, a 16-year-old who got his driver’s license a few hours prior may attempt to drive the pass in his grandmother’s 1980’s sedan," he explained. "That doesn’t mean it’s safe to do so."

Mountain roads like Black Bear Pass are no joke, and they shouldn't be taken lightly. Sure, you can zip up the mild parts of some trails in a Miata on big tires, but this isn't the same. You've got to have the right machine for the job, and look before you leap. It's a miracle this accident wasn't fatal.

Now This Is What You Don’t Want

Nobody was injured when this Ram went over, which isn’t always the case with wrecks on Colorado’s fabled Black Bear Pass.