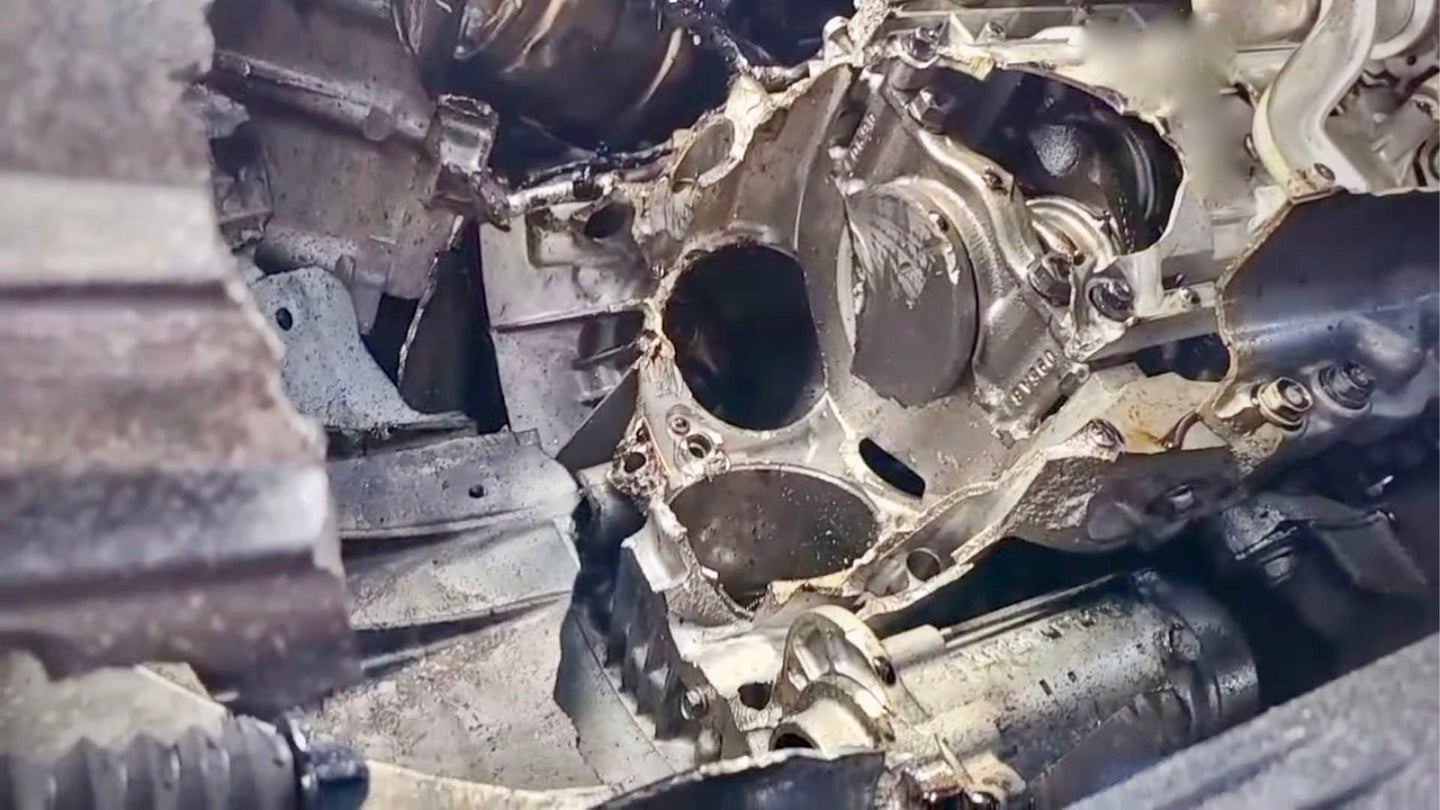 Last month, we asked you about your absolute worst towing experiences. Many of you had some great stories to share, but I think I've finally found one that takes the cake, and it involves destroying a new 2021 Jeep Wrangler Rubicon by flat-towing it improperly.

According to a TikTok video shared by shop foreman Toby Tuten, this white Wrangler Rubicon arrived at a North Florida dealership last week for service after being flat-towed behind the owner's RV. It seemed odd to Tuten that a brand-new Jeep was in for service, especially since it had less than 10,000 miles on the odometer. When he looked underneath the vehicle, however, he decided to start filming just to show the world what happens when you improperly flat-tow a four-wheel-drive off-roader and forget to take it out of gear. It's a rather expensive lesson indeed.

In case you can't discern what you're looking at, that's the Jeep's 3.6-liter V6 as seen from below. And before you ask, no, the oil pan wasn't delicately removed to show the internals—it was peeled back like a can of sardines when the transfer case quite literally exploded.

Tuten told The Drive that when the techs began diagnosing the vehicle, they noticed it had been left in "4-Low," which is what you'd want when traversing rough terrain at low speeds, or if stuck in a rut—but most definitely not while being towed at highway speeds. For reference, the JL Wrangler manual explicitly states not to exceed 25 miles per hour with 4-Low engaged.

What's even more damaging is that the vehicle was also left in first gear, meaning that as the wheels of the Wrangler turned, so did the driveshaft, transmission, and the rotating assembly of the engine. Tuten did a bit of napkin math and figured that at 55 mph, the engine was spinning somewhere around 50,000 rpm, well above the factory redline of 6,600 rpm.

The engine revved so high that the crankshaft sheared off, sending the two rear-most pistons and rods through the block. The clutch and flywheel also went flying through the transmission's bell housing and lopped off its input shaft.

As you might expect, this job quickly turned into a rather expensive fix. Tuten said that the final bill of replacement parts is close to cresting $30,000, and that doesn't include labor. And no, this isn't something covered under the factory warranty. It's likely that insurance would also consider this mechanically totaled, but whether or not the insurance company will cover the mishap is unknown.

It certainly sucks to see this happen to such a new vehicle, but I think it's fair to give this event the crown of "worst towing experience." But maybe—just maybe—this story will pop in your head the next time you're flat-towing and debate double-checking your load before taking off.