Don't be too intimidated by the Intimidator's IROC-winning ride. You know you want it. 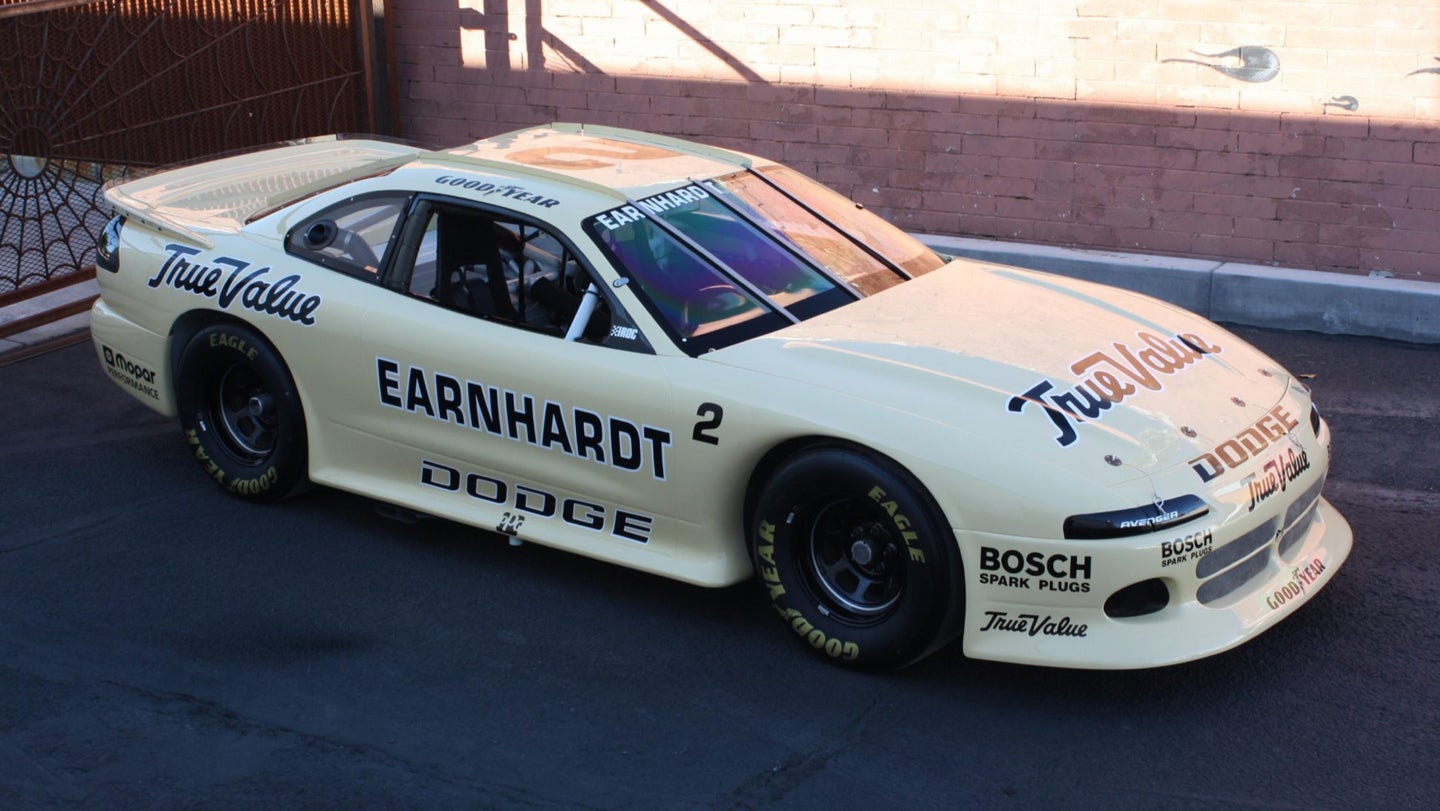 The International Race of Champions was a star-studded event, but for many NASCAR fans, one four-time IROC champ will always stand out from the rest: Dale Earnhardt Sr. IROC pitted such legendary names as Mario Andretti, Hurley Haywood and Mark Donohue against each other in identical cars, and this is your chance to own one driven by the Intimidator himself.

Up for sale on Bring a Trailer is IROC race car chassis No. 4, which still wears the beige Dodge Avenger bodywork it had in its last two IROC races in 1994 and 1995, both of which were wins. Mark Martin won in the car at Darlington Raceway in 1994, and Dale Earnhardt won with it at Talladega in 1995.

The bodywork changed over the years as the series featured different vehicles. Chassis No. 4 debuted in the series in 1984 wearing Chevrolet Camaro body. It was rebodied as a Dodge Daytona in 1990, followed by the Dodge Avenger re-skin in 1994.

As with any good stock car, this IROC race car's relation to the roadgoing Avenger was cosmetic at best. Under the hood sits a 355-cubic-inch IROC-spec Dodge V8 engine—that's 5.8 big ol' liters to us new- or foreign-car types—which sounds absolutely heavenly, as you can see in the video of Earnhardt's winning race in the car below.

The V8 was recently rebuilt by Ilmor Engineering, and the seller claims that it only has 45 hours of use on it so far. A Richmond Super T-10 four-speed manual transmission and a Stock Car Products quick-change rear differential send that V8's power to the rear wheels, too.

The car entered a total of 31 races with a truly mind-bending list of drivers who are believed to have driven it, as Bring a Trailer writes:

The car's post-IROC life was a bit less glamorous, going on to be used in the Marlboro Racing Experience until 2010. It was finally returned to its 1995 Talladega look in 2016, although it did keep two fixed-back bucket seats inside.

(Have we mentioned that it sounds awesome? We did, but it's worth noting a second time.)

The seller is offering up a host of historical photos and logbooks that document the car's illustrious life and truly prove that you are raising hell and praising Dale every time you take it out on track.

Everyone knows Earnhardt's famous No. 3 NASCAR race cars, but this No. 2 IROC car—numbers were assigned by series points standing in IROC—is a more obscure piece of Earnhardt memorabilia for the true connoisseur. There's no doubt that it would be welcome at vintage racing events and assorted opportunities for sweet burnouts, so consider this 5.8-liter V8-powered race car a downright responsible purchase.

If the No. 3 is always No. 1 in your heart, you can check out the full listing and throw in a bid on Bring a Trailer here.