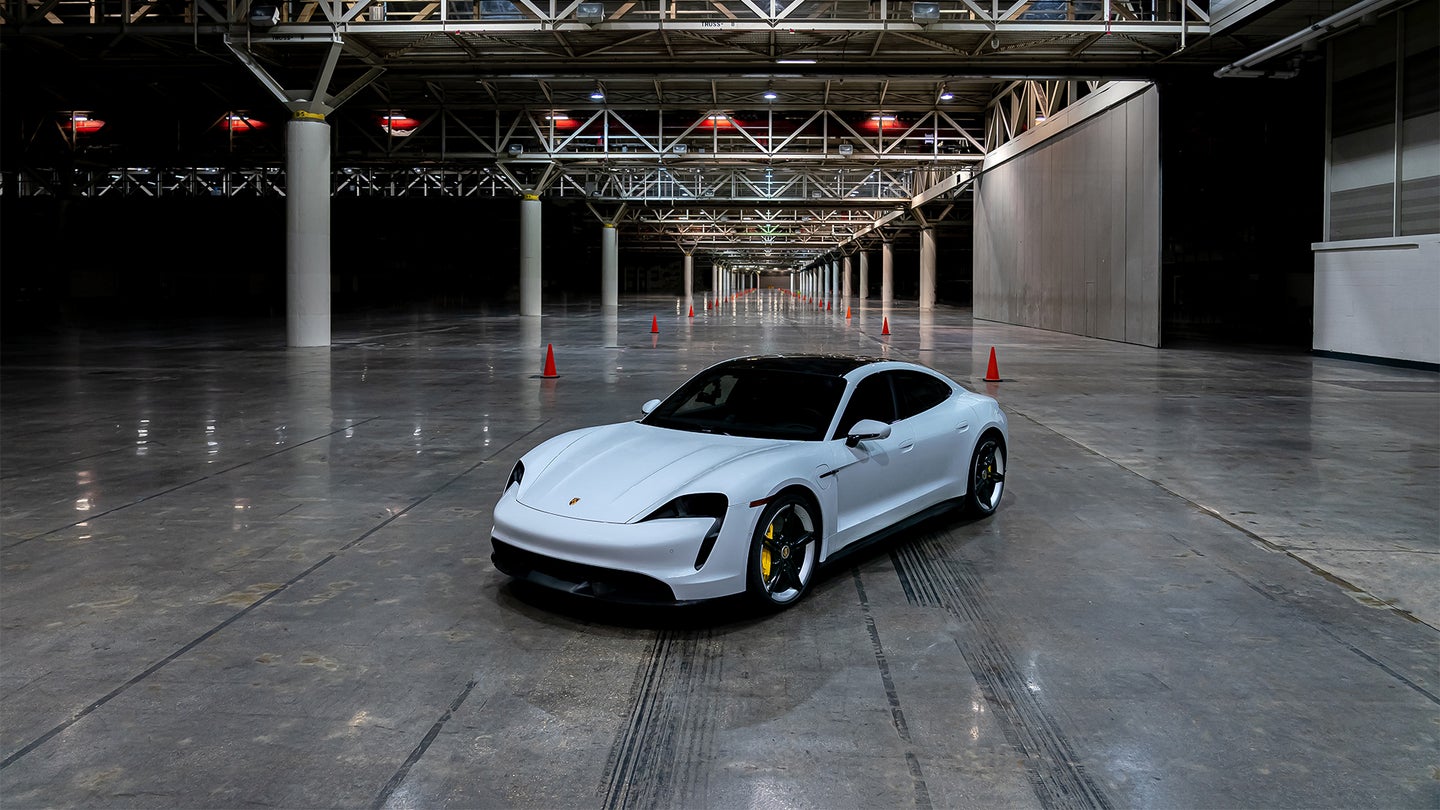 There are dozens of speed-related car records out there; fastest production car, land-speed, top speed—you name it, there's a record for it. One achievement that you might not often think about is the indoor speed record, which is essentially the highest speed a vehicle can reach in an enclosed space. This means accelerating from zero, reaching a record-breaking speed, and braking to a complete stop before the vehicle runs out of room. Well, now the electric Porsche Taycan Turbo S owns that record.

Recently, Porsche put its new already-record-beating EV up to the test with Georgia-native Porsche racing driver Leh Keen behind the wheel, who according to his own account, only took him a few seconds to learn that the Taycan had what it took to break the record.

The Taycan sat quietly on a sleek concrete floor inside of the Ernest N. Morial Convention Center in New Orleans, Louisiana. On either side of the performance sedan were concrete pillars forming a distinct lane from wall-to-wall, and a boundary of traffic cones signaled the strict route that the Porsche should follow as it attempted to conquer the speed record.

Keen received a pep talk and went over the specifics of the run as the Taycan's wheels were heated using off-the-shelf tire warmers. It's important to remember that the car also had to achieve this record from a standstill—so there was no running start and no escape once the wheels started turning. Stay on the accelerator too long and you risk slamming into the wall ahead, but not long enough and the record won't be broken. There was a fine line to toe, and Keen needed to learn how far he could push the Porsche.

Once Keen got the go-ahead, the Taycan shot forward with a savage speed. Its two electric motors sent a combined 750 horsepower to all four wheels and it hit the mark in just 2.6 seconds—quite a feat considering the slippery surface. It didn't stop there. The car continued to speed up, eventually hitting 102.6 mph before having to stand on the brakes. But was that enough to break the record?

To put this into perspective, the last vehicle to break this record was a custom lightweight Cross Kart driven by Finnish rally driver Mikko Hirvonen in 2013. The 688-pound cart was powered by a 150-horsepower 750cc Suzuki GSX-R engine and set the record at 86.99 mph (140 kph), beating out Tanner Foust and his Ford Fiesta hot hatch by just 0.02 MPH.

They say to pick the right tool for the job, and the Taycan very much feels like the right tool. It's one of the hardest accelerating and (despite tipping the scales at over 5,100 pounds) one of the fastest decelerating cars on the market—and both were crucial to breaking this record. According to Porsche, the distance the Taycan had available for the run was 1,600.7 feet, but it ended up not needing the entire space. We asked Porsche how many seconds it took the Taycan to do zero to 102.6 mph and back to zero, but it claimed to not possess such data.

“I didn’t really appreciate the scale of the record attempt until my first exploratory run," said Keen after his record-setting attempt.

"The surface is so unpredictable, so slick, that you have to have complete trust in your car. It truly was like ice – and you’re accelerating flat out, facing a really hard wall at the end. Suddenly, even in a massive space like the one we had, it seems very small.”

Officials from Guinness World Records certified Keen's run at 102.6 mph, more than 15 mph faster than the seven-year-old record. And while this isn't a trophy that everybody in motorsports is reaching for all at once, it's still rather impressive. The Taycan's all-electric power with instantaneous torque helped to solidify its win, and its deep-roots racing heritage truly speaks to Porsche's commitment to next-generation powerplants.

At $81,250, Porsche’s base-model Taycan is both its most powerful base-model yet as well as $7,300 less than the cheapest Panamera.

A faster time from New York to Los Angeles—but not without plenty of quality problems on its own.