The bikes were cleaned up and donated to charity after this muddy romp. 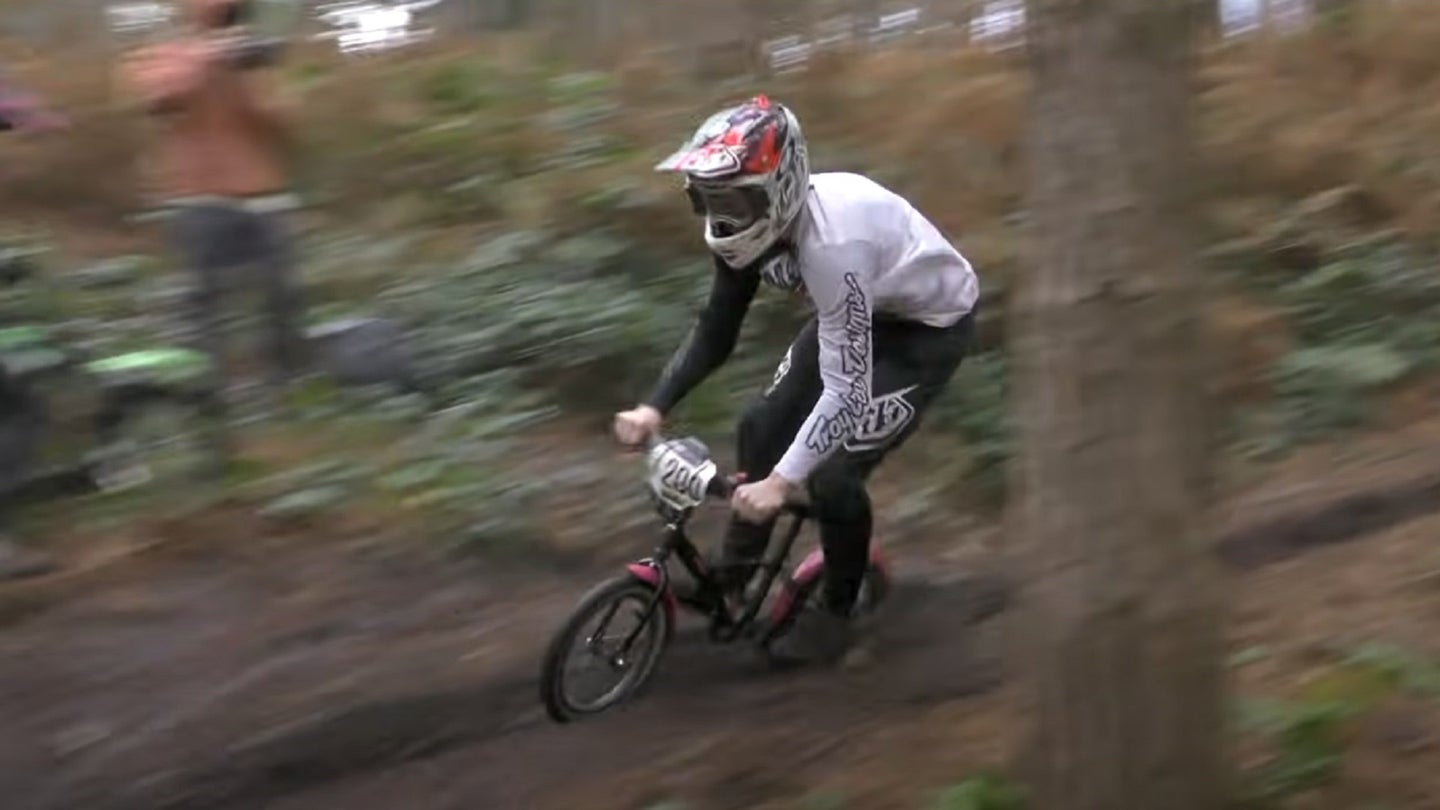 When was the last time you rode a kids’ bike? I mean: tiny seat, tassels, the whole thing? I remember that feeling of freedom as I hurtled through the neighborhood on my yellow Huffy riding as fast as my legs would let me go, but I was much smaller then. Perhaps video creator and high-adrenaline cycling enthusiast Tom Caldwell remembered that feeling from his childhood when he declared 2020 to be “a bit of a rough one” and decided to gift the world with a video of his mates in the UK riding kids’ one-speed bikes down muddy hills.

Far from being self-conscious on these little bikes or making fun of each other, the cyclists are laughing hysterically through the whole experience and clearly having a blast. One commenter on the YouTube page said, “Brb shopping for kids’ bikes. For....my kids, of course.”

It shouldn’t be a surprise that these bikes are so much fun at this size. BMX Olympians race their bikes on 20-inch wheels and a small frame designed to withstand impact from big jumps. On the American Bicycle Association site, BMX bikes are described as “built small so you can go big.” Ever since Elliot pedaled furiously in the chase scene in E.T. in 1982, BMX has been on the upswing and BMX freestyle was scheduled to debut at the Olympics in Tokyo last summer (postponed to summer 2021).

The mini bikes that Caldwell and friends rode for laughs are not BMX, even they’re executing twists and jumps in BMX style. These are bonafide kids’ bikes like a Schwinn you’d pick up at Target for a hundred bucks or less. And still, they’re running these bikes for all they’re worth, squeezing every bit of performance out of them, some with a basket on the front. Caldwell regularly brings his buddies together to capture big jumps and wipeouts on camera with bikes much more size-appropriate for grownups.

If you have kids’ bikes in your garage and you want to hypothetically take them out for a spin, make sure you wash them down before returning them. After all of Caldwell’s friends finished their wild ride, they cleaned up the bikes and donated them to a local charity. Now I want to host my own mini dirt bike fest. Who's in?

Pedal, fold, and go further with a portable and easy to ride electric bicycle

The Best Skateboard For Kids (Review & Buying Guide) in 2022

These skateboards for kids are the perfect picks for beginner skaters

Zanardi, a two-time CART champion and double-amputee, is said to have suffered a severe head injury from the incident.