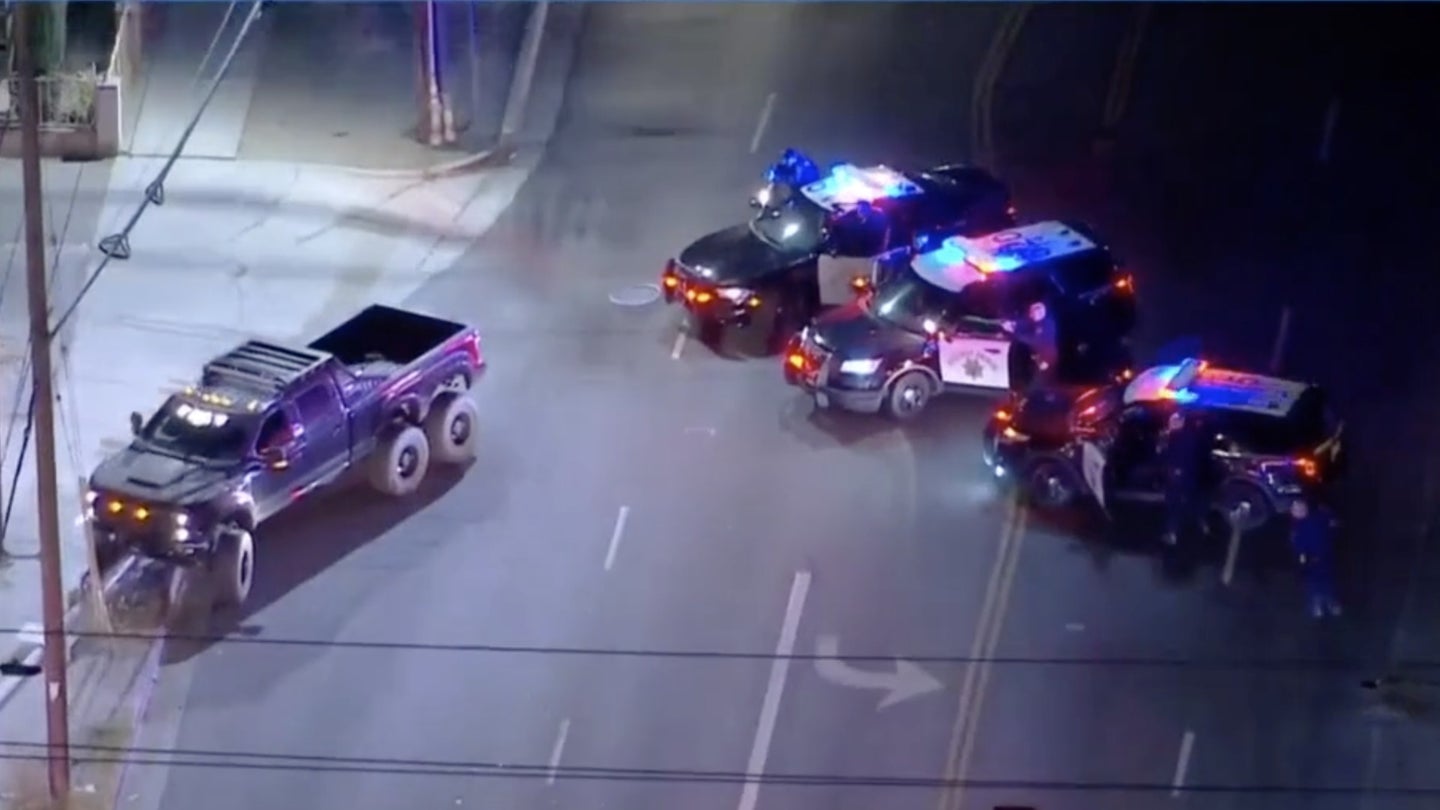 Police chases are nothing new, but it's not every day something besides a clapped-out Ford Probe ends up being involved in one. Occasionally, something exciting like a supercharged Mustang will try to escape the cops at high speed. Surely, then, a one-off 6x6 pickup supposedly built by the Diesel Brothers is on another level. Stay classy, Los Angeles.

After eluding capture for a few miles, the driver in the Ford Super Duty soon found that, as well as not being very fast, the six-wheeled monstrosity didn't corner very well either. An unsuccessful attempt to escape through a Taco Bell parking lot led to the truck getting into a scrap with a telephone pole, which it lost. Following this defeat at the hands of the local infrastructure, the suspect was apprehended.

The truck itself is believed to have been a Ford F-550 modified with six wheels and some other mostly visual trimmings. CNET Roadshow's Daniel Golson tweeted this picture of a Diesel Brothers' 2019 SEMA build, which looks spot-on. You can see the pictured truck shares traits like an overarching bed rack that extends over the roof, and it's also black in color. Rumor has it that it belongs to the famous DJ, Marshmello—no word on that yet. From what we can see in previous stories, Marshmello's is matte green. Or, at least it was once upon a time.

Since these vehicles are typically one-offs, it's hard to say exactly what the specifications are. It was reportedly stolen from a dealership service bay late last night in Malibu before getting into the chase. As the local CBS News station reports, the thief allegedly rode up to the truck on a bicycle, threw the bike in the bed and then drove the rig away. Not exactly a cunning plan, but it worked...for a little bit, at least.

After failing to get a gap between himself and the police, the driver impacted the aforementioned telephone pole and was apprehended without issue. It seems like the truck only suffered minor damage like a flat tire—thanks, spike strip—and a punctured radiator; however, the driver likely figured that he was cornered and gave up. As to why he got into the chase to begin with, police suspected he was under the influence of drugs and or alcohol.