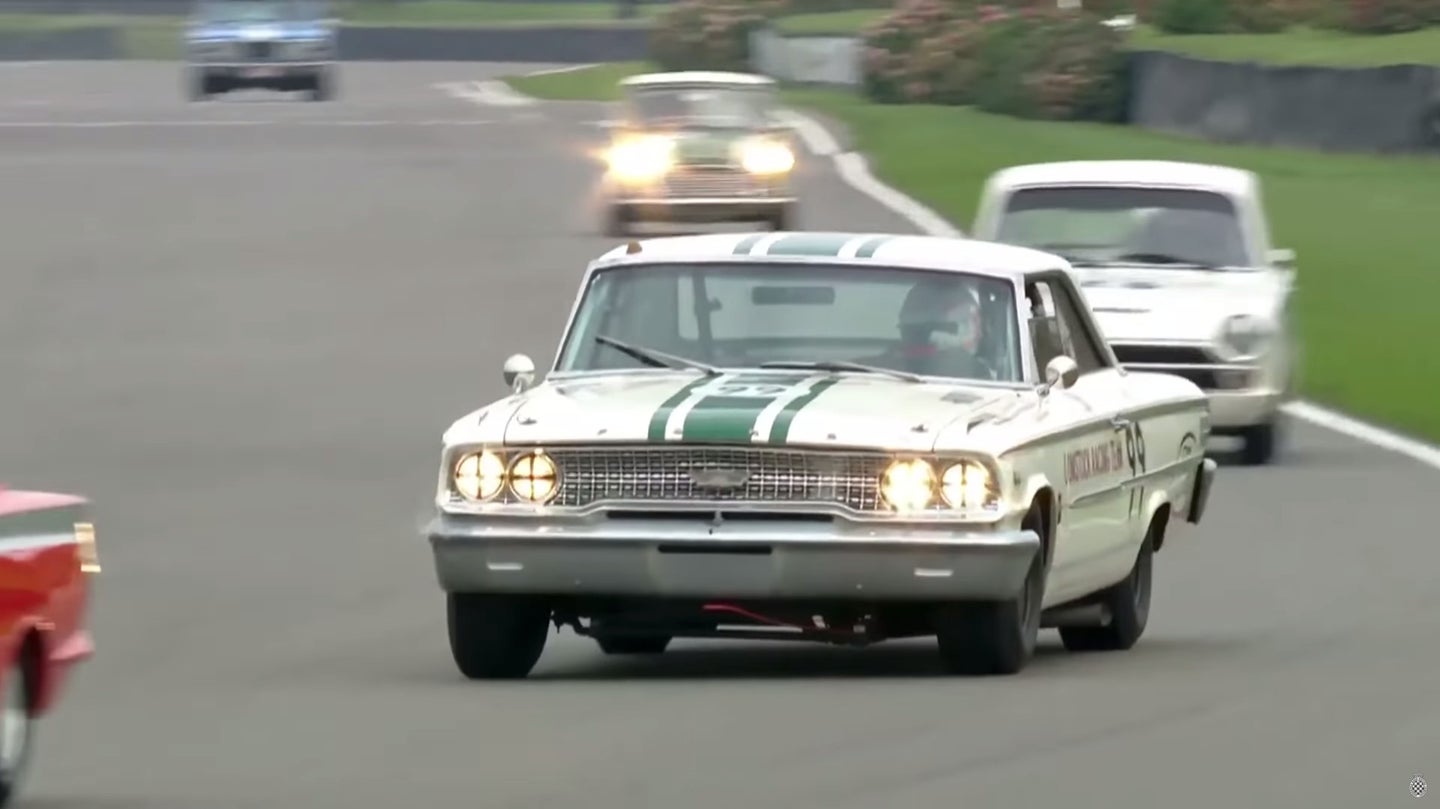 Back in 1962, British racing fans got used to the sight of peppy Jaguar Mk2s, Mini Coopers and Sunbeam Rapiers getting beaten by a certain Chevrolet Impala imported by Dan Gurney just for the British Saloon Car Championship. A few months after leading the Silverstone race that sadly ended with a broken wheel for said Impala, Gurney's V8 Chevy got banned for being too fast against the lightweight four-cylinders, as well as Jaguar's 3.8-liter straight-six.

The 1963 Ford Galaxie 500 was deemed too heavy for drag racing, so Ford produced a limited run of Galaxie 500 Sport Special Tudor Fastbacks in Corinthian White only. By that time, the English side of Ford came out with the Cortina packing the Lotus Twin-Cam engine, and so it was rather surprising to see Jack Sears winning the 1963 British Saloon Car Championship using a Galaxie 500 instead, prepared by Holman and Moody. Graham Hill and Sir Jack Brabham also had a go in those massive Fords, which usually crashed after losing their brakes, only for the whole system to get upgraded to the GT40's 12-inch discs by the end of the season. Eventually, the Lotus Cortinas became too fast for the Galaxie 500s, which remained rather hopeless through the corners.

More than 55 years later, it's not surprising that we see plenty of Galaxie 500s and other American muscle cars fight back against the Cortinas, Mini Coopers, Jaguars, and whatever else the Europeans considers to be touring cars in the 1960s. Charles Henry Gordon-Lennox—the 11th Duke of Richmond who we once knew as Lord March before his now 25-year-old son inherited that title—is the founder of both the Goodwood Revival and Festival of Speed. He is also a huge fan of hot rods and the owner of several American classics.

The 2020 Goodwood Speedweek has been an invite-only "behind closed doors" pandemic event combining the best of both the canceled Festival of Speed and Revival. Everybody's favorites, the highly-competitive St. Mary’s Trophy races saw BTCC drivers, as well as celebrities and vintage racing champs battle it out, with Detroit being represented by a trio of 1963 Galaxie 500s, Duncan Pittaway's 1965 Plymouth Barracuda, a '63 Studebaker Lark Daytona 500 and a Dodge Dart from 1964.

Driving the No. 99 Galaxie, 2016 BTCC Championship runner up Sam Tordoff was forced to retire from the first race after his 7.4-liter V8 went up in smoke. This meant staring the second race from dead last, only having 20 minutes to catch up to the fastest of "saloon cars of a type that raced between 1960 and 1966."

Tordoff decided to demonstrate that while the V8 makes these massive Fords faster in the straights, his touring car magic can also maintain that pace through the corners, sometimes by slightly cutting them through the grass. His has easily been the drive of the weekend, and a glorious showing for Fords everywhere: