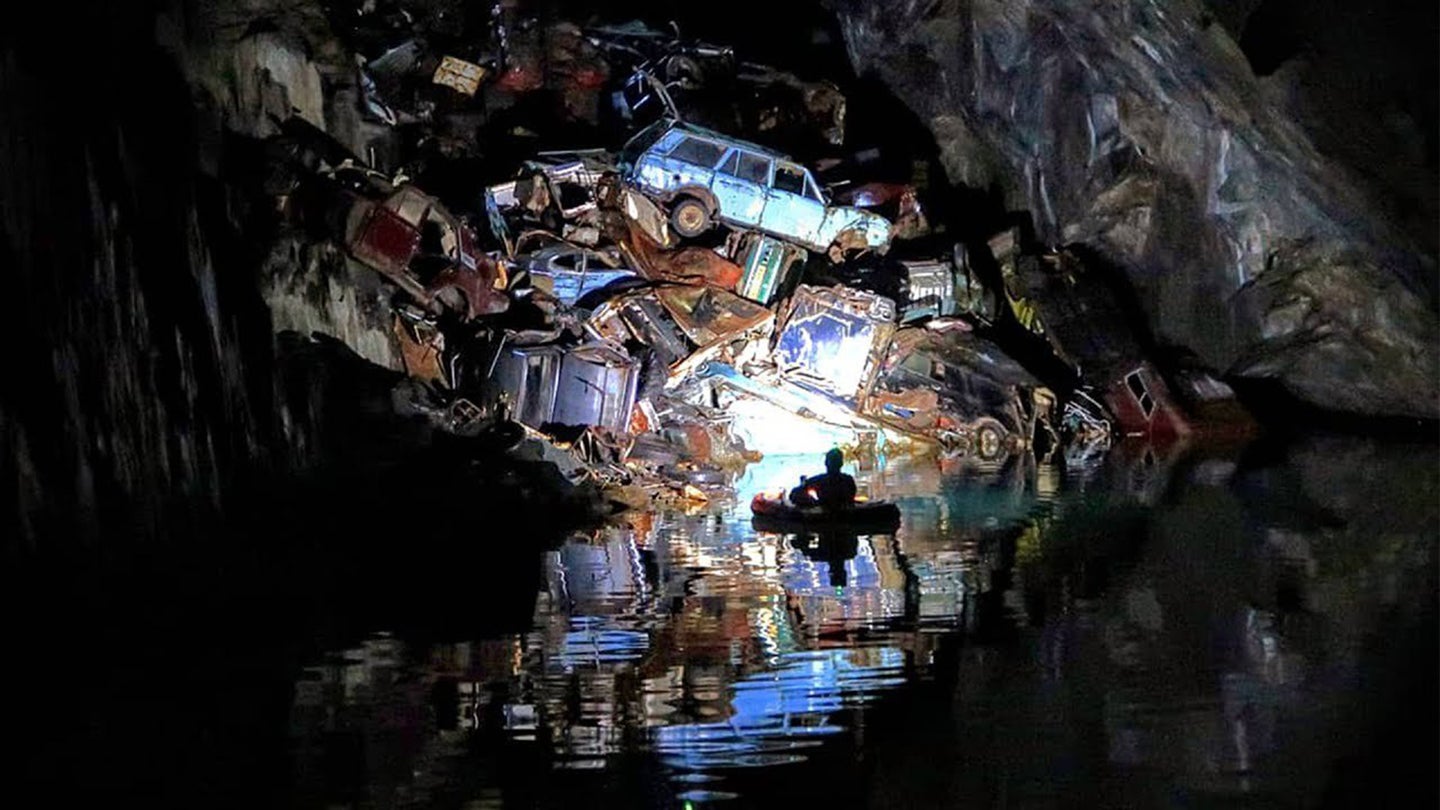 Cars sometimes end up abandoned in bizarre places—in the middle of a forest, on top of a mountain, or even in an old dealership. But the mind still boggles at the sight of 100-odd vehicles from various decades in a crumpled heap at the bottom of a flooded, disused mine in Great Britain. It's called the Cavern of Lost Souls, and a recent expedition by a group of urban explorers shows how accurate that name really is.

Once part of a productive slate mine, the massive underground chamber sits below a mountain in Ceredigion, Wales. Its transition to a subterranean junkyard began after mining operations ceased in 1960, at which point a small opening in the ceiling reportedly became an official garbage disposal for locals on the surface. The magic black hole swallowed up everything from household appliances to cars—the latter of which really piled up below, with around a hundred stacked in a cascade of rusting metal rising out of the watery depths.

There are some rumors as to why exactly so many cars ended up down there, but no concrete explanations have emerged. Most are smashed or deteriorated beyond recognition, but there are some instant standouts like the late-Sixties Ford Cortina wagon front and center on the pile. The way the cars lie half-submerged in utter darkness, completely ruined and impossible to retrieve...the Cavern of Lost Souls, indeed.

This video comes courtesy of the YouTube channel Richard's Reality, which explores abandoned and forgotten places around Britain. The full 11-minute clip traces the small group's descent deep into the mine, giving a good sense of the true inaccessibility of the place. We've cued in the video to when they finally reach their goal and set out in an inflatable boat for an up-close look.

The towering mess is mesmerizing to behold, and really the entire space is permeated with an eerie beauty. Other photos capture the undisturbed water, a striking, translucent turquoise against the red-brown jagged metal. The way the cars are mashed together in random violence verges on modern art.

Junkyards usually aren't permanent fixtures in the landscape. This one's got a shot at entering the fossil record. We have a feeling those lost souls can rest in peace.