No, This Mid-Engine Semi-Truck Fused With a Ford Station Wagon Isn’t Photoshop 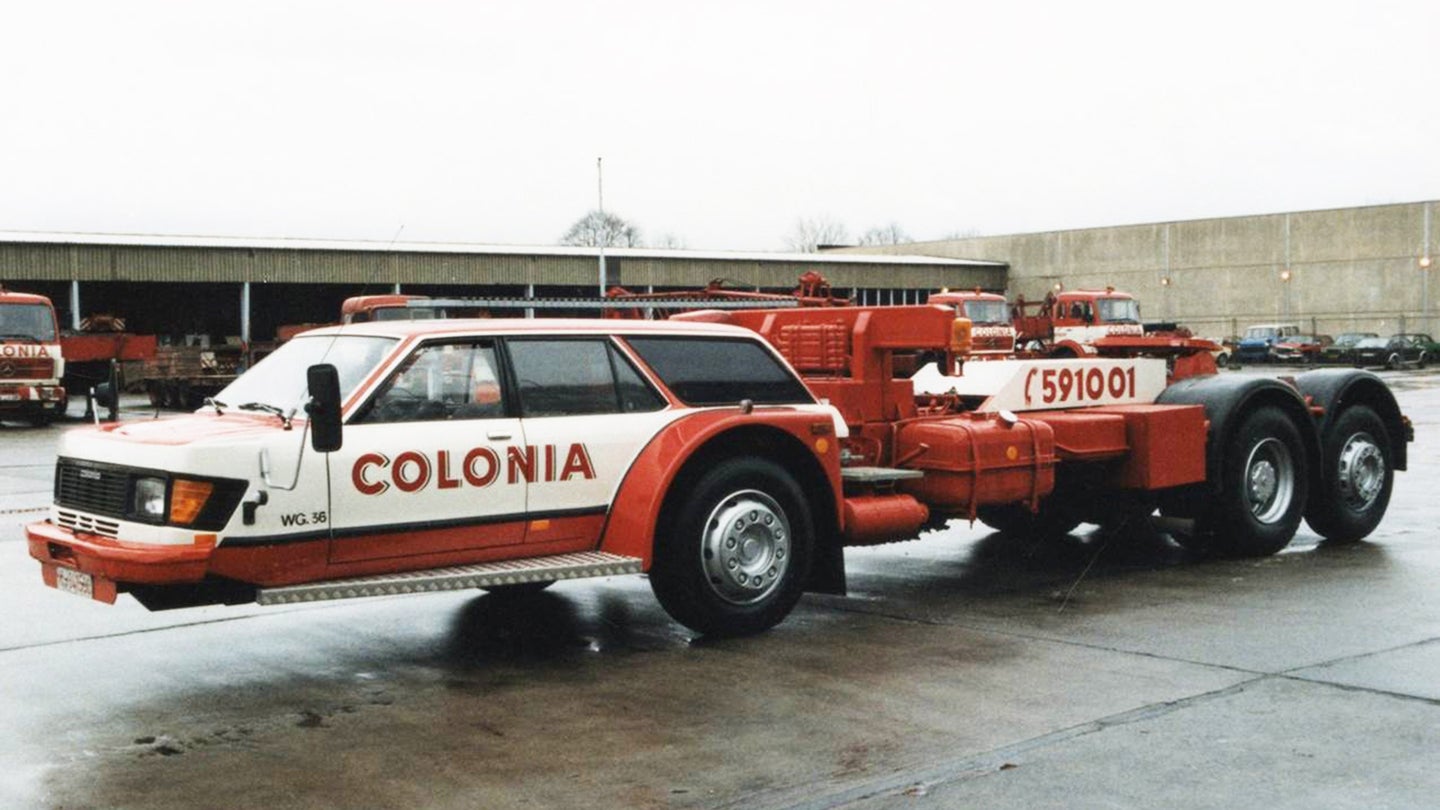 When it comes to transporting super-sized loads, there's really no one-size-fits-all solution. Hauling 180-foot-long metal beams may be simpler and less threatening than moving 220 tons of ICBMs and the equipment to launch them, but neither can be done with off-the-shelf solutions. In the latter case, that meant the Soviets testing a 12-wheeled, V12 mega truck in secret, and in the former, it meant a German aluminum foundry commissioning one hell of a strange semi-truck: the Schnibbelmobil.

Alternatively known as the Cologne Crocodile, the Schnibbelmobil was constructed in the early 1980s by German heavy vehicle specialists Colonia Gmbh at the behest of VAW Aluminum. As you can clearly see, it's a mashup of a station wagon and a heavy-duty truck frame, executed with the kind of illogical precision that makes your brain scream PHOTOSHOP! But no, friends. This thing is real. Better yet, it was Autobahn-legal.

According to German vintage commercial vehicle magazine Historischer Kraftwerkehr—no doubt fans of the Schi-Stra-Bus—the Schnibbelmobil started out as a MAN F8 22.320 UNL cabover semi. Since the primary objective was to carry extraordinarily long loads, it couldn't retain the tall, factory sleeper cab. This wasn't exactly a novel problem, but Colonia came up with a pretty novel solution: grafting the body of a Ford Granada Turnier station wagon to a purpose-built auxiliary front frame.

The poor wagon had also been recently wrecked by an employee, so Colonia affixed the front end from a Mercedes-Benz TN 207 D van to patch up the damage, shortening the jutting Granada body's nose in a fashion that only accentuates its odd proportions. As for its name, Schnibbel has no direct English translation and is said to have been the nickname of the fellow who drove it.

Per Historischer Kraftwerkehr, the Schnibbelmobil's interior was for the most part stock Ford; it had the Granada's dashboard and small (for a truck) steering wheel. Behind that steering wheel, however, could be seen a 100-kmh (62-mph) speedometer, and in the rear-view mirror, a 414-horsepower turbodiesel engine. There was also apparently room to sleep where the back seats would have been, though taking advantage of it would've been a challenge given the Schnibbelmobil's peculiarities.

Unfortunately, drivers complained that the Schnibbelmobil's long, overhanging cab tended to produce significant vertical motion and induce literal seasickness. Sleeping breaks while stationary at company HQ reportedly weren't much easier, as Colonia employees were just as taken with the Schnibbelmobil as the general public and kept climbing all over it.

None of its strange traits, however, bothered Germany's TÜV (think the DMV, but stricter), which allowed the Schnibbelmobil to cart loads down the Autobahn during the '80s and '90s, throughout which it covered some 500,000 miles.

Like all good times, the Schnibbelmobil's days were numbered, and when Colonia completed an apparently longer successor in the late '90s, the truck was mothballed—but apparently not scrapped. Comments left on a Dutch blog in 2013 indicate Colonia still has the Schnibbelmobil hidden in a shed somewhere, and as recently as 2019, a German forumer claimed to have seen the truck.

But while Colonia supplied many photos shown here, the company itself didn't offer any information on the Schnibbelmobil's status. Maybe this long-nosed long-hauler is indeed hidden in a warehouse as photos suggest, but for now, this truck remains trapped in a sort of Schrödinger's Cat purgatory; its continued existence uncertain. At least it enjoys the company of another big, red, lost oddity.