It’s still up there—but you fine folks had some interesting ideas for getting it down. 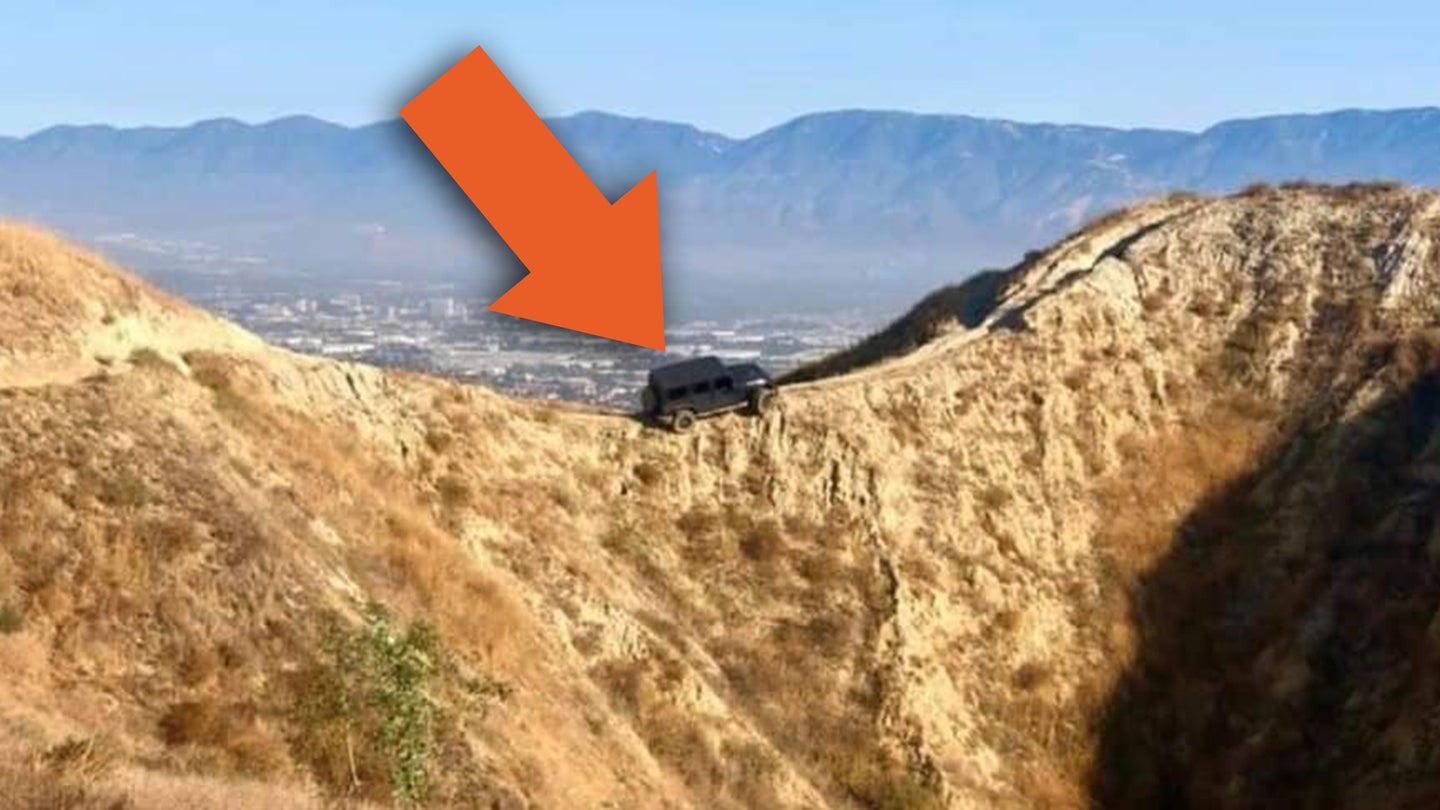 It's still anyone's guess how that now-infamous Jeep Wrangler got stuck atop a ridgeline mountain bike trail in California, where it remains as I write this. Still, it's undeniable that walking away from the situation was the smartest decision that driver made all day. Now the biggest concern is getting it down from the ridge and, as it turns out, you all have some...innovative ideas.

Side note: Yes, this is real. We've heard from multiple people calling this fake news, saying that the wide shot above is really a Grand Theft Auto screenshot, or that is has to be an old story because there's no smoke from California's fires visible in the pictures. However, we've since learned that local authorities are investigating, and we've obtained updated photos of the Jeep showing that it's been anchored by either the still-anonymous owner or a Good Samaritan after yesterday's news went out.

Anyway, my inbox was flooded with suggestions when I woke up this morning—some more realistic than others. Without further ado, Mr. Anonymous Jeep Driver, these are your best bets.

Dig, Dig, Then Dig Some More

"I would start with a round 7ft metal fence post and hammer that into the soft dirt angling away from the Jeep, do this about 20ft away from the rear. The post should be buried at least 6.5ft deep leaving the post hollow. Fill the post 1/2 with dirt, then slide a 4ft reinforced steel bar with a mount. This should be angled away from the rear of the jeep. Next either use a thick ratcheting belt and securely connect to the Jeep and slowly pull it out, or mount a rear wench. Very dangerous but that's how I would get it out if I couldn't take another vehicle up there.

If they can just back it up enough, they could take their time retracing the steps getting it back down. Definitely take several others with you to watch for sparks and prevent possible fire."

Use What You've Got

"A little help from a winch and an anchor point such as a spare tire dug into the dirt at the Jeep’s 10/11 o’clock would be where I’d start. I’d dig a hole about 30” deep with the closest side of the hole facing the Jeep, then dig a 3” wide trench about 15” deep back towards the Jeep, decreasing depth to zero over about 8ft. Throw the spare tire in the hole with a recovery strap secured to the wheel hub. The strap runs through the trench to the winch lead. Then slowly tension the winch to the front of the Jeep and pull it back up to center on the ridge line. Then get in and drive the trail to the right and never look back. Then I’d buy me a 6 pack for helping and be on my merry way."

"The issue is that there’s not enough clearance for the Jeep to get it’s balance without going over the cliff in a bad way.

The solution is to get a helicopter (Sikorsky S-70C Firehawk Preferred due to its sling load capacity of over 9Klbs) and attach 4 ton chains (3/8" grade 70) to the tow points on the jeep and using high strength steel lines to the chopper. Once there is significant tension on the line when the helicopter is above the jeep you have 2 options: First one is to go ahead and back the jeep up using the Sikorsky to lift the jeep a few feet off the ground and back to safety (He got up there unscathed to that point, he can get down safely from that point).

This has some risk, but is the safer of the two options.Second is to use the Sikorsky as a guide wire with constant tension and have a driver in the Jeep to back the car back to safety. More difficult and runs the risk of the jeep falling off the trail to the point where option one HAS to be used as a lifesaving measure. That’s my $.02"

Drive It Out of There

"Looking at the Jeep on the ridge trail: if someone were to anchor to the other side of the ridge, it might be possible to power the Jeep back up onto the trail. Then hand prep the path to back the vehicle out to a suitable place to turn it around. People should be prepared to spend a night up there, but it could be done."

"Looks like someone following their GPS lol. To get down need someone with team of mules that are used to moving logs."

"You can reach out to the CA National Guard to see if they can do a 'training mission' with a chinook to get it down. There is already funding available for fixed and rotor wing missions that they may take this on."

"Hire travis pastrami the meathead Daredevil to drive it down? Funded by red bull (of course) hahaha! Or...Get one of those freaky voodoo 'magicians' like david blane (copperfield ur choice) make it just disappear?"

Why Didn't I Think of That?

Anything You Can Do, I Can Do Better

"Ford should pay for the ability to recover the vehicle with their new Bronco...."

"give it a little push!!!! LOLOLOLOLOL" [Ed Note: There were too many of these to count. Great job, guys.]

Don't Worry, I'll Go Get It

"Tell me its location and I'll drive it back down as long as it's finders keepers!"

Apparently, according to a local who emailed me Wednesday afternoon, the Loma Linda mayor Phil Dupper has announced that the sheriff's department has been in contact with the owner. It wasn't stolen and they're now discussing the best way to go about retrieving it. More recent pictures show that someone has at least thrown a tow strap around the bumper, but it doesn't look like they got very far.

If they choose to employ a helicopter, then they should definitely let me know. I've got experts in my inbox telling exactly how to get the job done.

Know more about this Jeep and how they plan to get it down? Shoot us a note: tips@thedrive.com. Or, email the author directly: caleb@thedrive.com