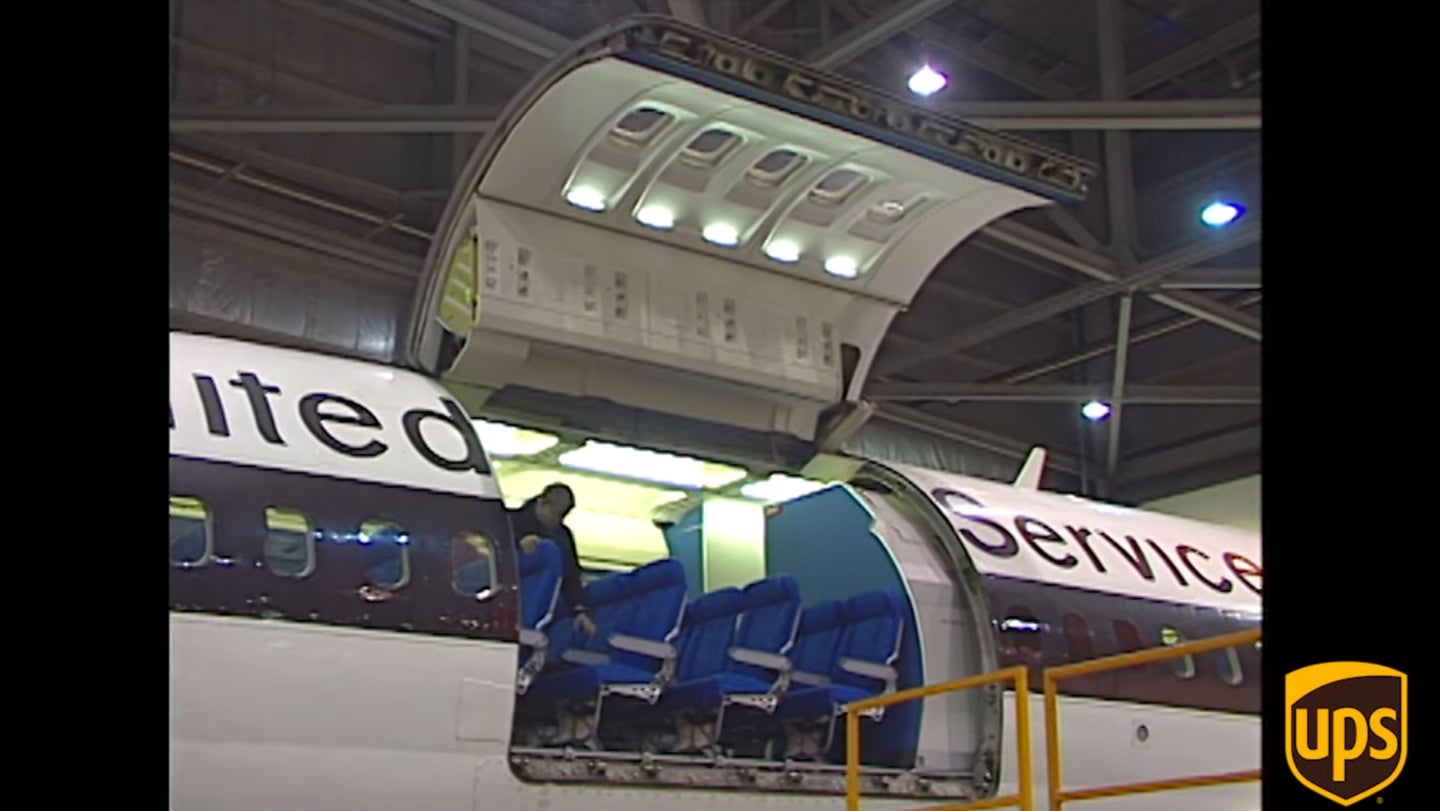 Did you know there was a time where you could send yourself via UPS and not have to worry about breaking the law, or even finding an appropriately sized box? The only downside is, someone would need to charter the plane.

The good ol' United Parcel Service took "What can brown do for you?" to its logical end in the mid-nineties with its "Asset Utilization Experiment," according to Simple Flying. During that time, UPS saw an opportunity to make an extra buck with planes that sat idle during the weekends. UPS's massive cargo fleet was profitable as a whole, but more money is always better. Thus, the UPS Passenger Operations charter service was born.

Five Boeing 727 cargo jets were converted every Friday for chartered flights and then swapped back to carry regular shipments by Monday. Interiors were modular and fit easily in and out of the big cargo doors in the side of the planes. UPS mandated that its engineers make the conversion doable within just a four-hour window, per Simple Flying.

Two permanent toilets got installed at the rear of the five aircraft used by UPS Passenger Operations. The upside is that the 727s they used were former passenger jets, according to AeroSavvy, so they still had all the windows installed along with most of the plumbing and wiring you need for a passenger cabin. A recent upgrade to quieter Rolls-Royce Tay turbofan engines made it even easier to justify taking passengers along for the ride.

What's interesting is that these aren't the only "quick change" aircraft out there. Boeing offered its own factory 727 QC that functioned in a similar way, and 111 of those planes were sold across the world, according to AeroSavvy.

Because these were just idle planes, UPS could rent these flights to travel agencies and other groups for less than a traditional airline would, as they didn't have to worry about working within any kind of existing weekend route schedule. Per AeroSavvy, each plane could hold up to 113 passengers, and the interiors offered more space between seats than the airlines at the time: a full 33 inches.

While the exterior was still in UPS's signature white and brown livery, the upholstery and crew outfits were bright blue. Pilots were pulled from UPS's existing staff, and the rest of the crew was filled through a talent agency specializing in charter flights, notes Simple Flying. Most flights were filled with vacationers, and the flights themselves operated much like any other passenger flight, with inflight meals, canned beverages and even a warm cloth handed to passengers before landing.

The service was short-lived, only running from 1997 to 2001. According to Simple Flying, the Boeing 727s used for the Passenger Operations flights didn't have enough range for some of their requested routes, and all too often had to stop to refuel. The frequent conversion and de-conversion of the planes to haul passengers added a lot of wear and tear, which translated into extra costs and problems. Even the modular design ran into issues, as the 727s were built before computer machinery went into widespread use, and thus, varied in size just enough to make things frustrating.

In the end, UPS scrapped its Passenger Operations flights to focus on what they were known for: cargo.