When the Vintage VW Club of America found out about a Texas man’s needs, they came together and made great things happen. 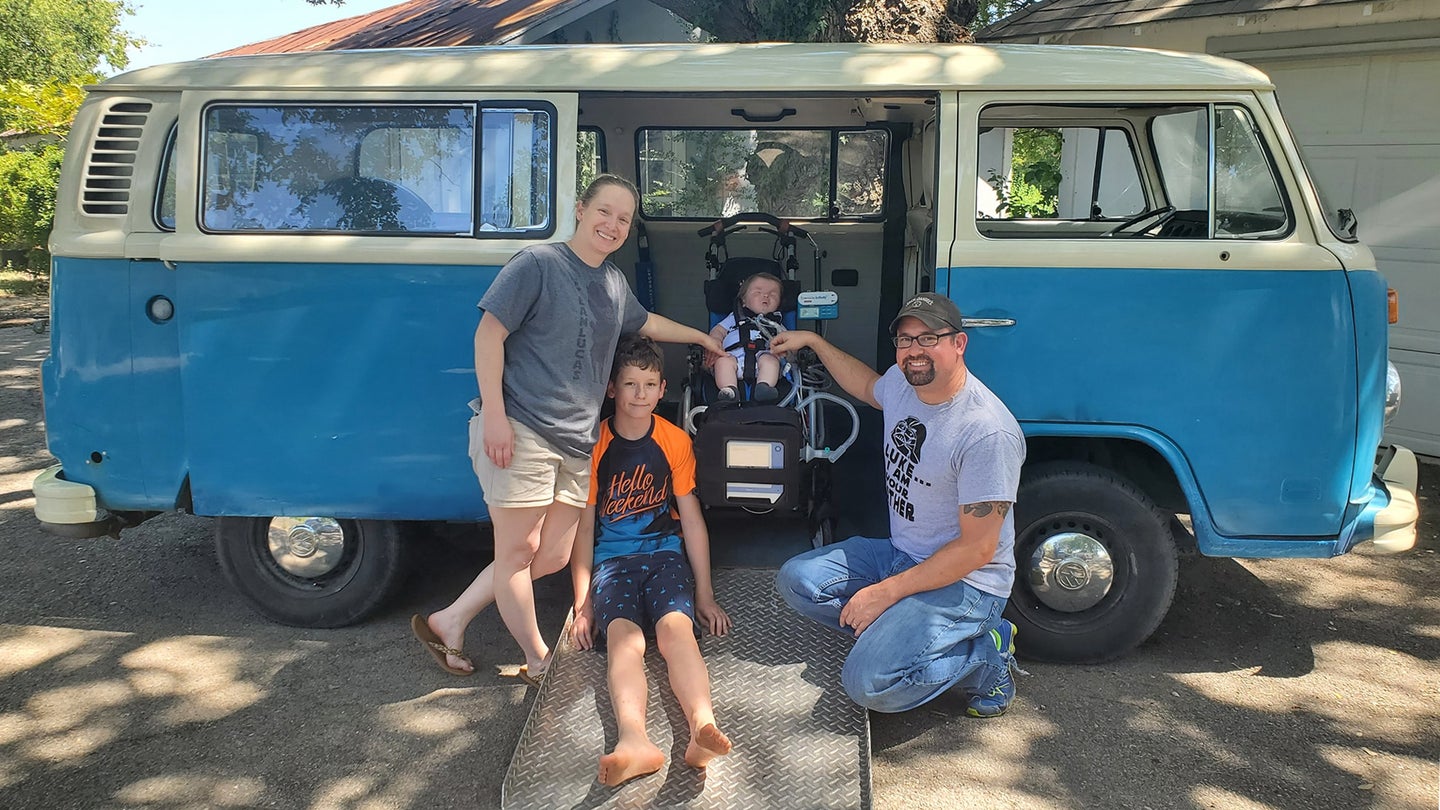 In 2020, we'll take whatever good news we can get. Fortunately, we've got a feel-good story from the depths of the automotive community that won't disappoint. It's about a man and his love for VW buses, so you know it's going to be good.

It all started with Rick Kusak browsing Facebook for ideas. He had been searching for a way to convert his 1966 Volkswagen bus into a wheelchair accessible vehicle for his nine-month-old son Lucas when he across a photo of a perfect example. As a result, Kusak posted the photo to a group called Vintage Volkswagen Club of America (VVWCA) to ask for some design ideas.

One of Kusak's passions is air-cooled Volkswagens, and he's owned nearly a half-dozen bugs and buses throughout the years, so converting his bus project seemed like the perfect idea.

It's worth noting that the bus wasn't Kusak's first pick for an accessible vehicle, but the problem is that modern wheelchair-accessible vans are quite expensive. Purchasing a new converted Honda Odyssey EX-L from conversion companies like VMI or Braunability start at around $70,000—nearly double the van's sticker price. And when the van Kusak and his family were looking at overheated on the way to their home in Texas, it was almost like an epiphany.

"I didn't originally pick an air-cooled bus to do a conversion. It really was more of a convenience thing, because I already had one," Kusak told The Drive. "You see, when Lucas was born, his special condition was somewhat of a surprise to us. When I sat down and thought about how much our lives were about to change, I made a knee-jerk decision to give up VWs. I thought that if Lucas couldn't see them, then he couldn't appreciate them, and I don't want them!"

"In time, I came to my senses. I figured out that I can share my passion for VWs with him, it will just have to be in different ways! And what better way than to turn ours into his transportation—so I started looking for ideas on how to make it happen," he added.

The post in the VVWCA group gained a bit of traction with people offering advice on the conversion and offered some leads on who to contact for more information. However, something even more incredible happened shortly thereafter, when the owner of the bus that Kusak posted a photo of, Bob Yost, popped up in the comments and offered to give him the very same vehicle as a gift—no charge.

"When Bob offered it to us, I was speechless," said Kusak. "I was in awe. I couldn't believe it. I sat and stared at his message with my jaw on the floor, asking myself questions like: 'Is this even possible?'"

Yost won this particular low-mileage bus from an eBay auction and had it shipped from Ohio to his home in Missoula, Montana. He invested around $2,000 into the bus after purchasing it, including having the top repainted. The only thing left to make the van roadworthy was to replace the rusty gas tank. Fortunately, another man in the group heard of the fuel tank problem and offered to send Kusak a brand new tank to get the bus back on the road.

Kusak didn't want to take the van for free, so he offered his Volksrod creation in return. Yost initially refused, insisting that he didn't expect anything in return, but after a bit of reluctant arm-twisting, Yost accepted the Volksrod as a token of appreciation for his good deed.

Eric Goodman, the president of the Vintage Volkswagen Club of America, caught wind of Yost's generosity and offered to pay to have the bus shipped across the country on behalf of the organization. After contacting several auto transporters, Goodman reported that it would take nearly two months to arrange this type of transport and the community went back to the drawing board to find a way to transport bus (and now the Volksrod) 1,790 miles in each direction.

The group then began collecting donations to cover the cost of private transport, raising over $700. Kusak's co-worker, Tyler Norton, stepped up to the plate and offered to make the drive. Tyler, his wife, and his father-in-law took turns driving for 60 nonstop hours to complete the trade. Kusak was told that Yost was smiling ear-to-ear as the Volksrod was loaded off the trailer and he drove it home.

After the bus arrived back in Texas, it was unloaded and admired by Kusak and his family, who finally had an accessible vehicle to call their own. Even then, there was one last surprise to be found: a $500 check stashed inside by Yost made out to Lucas.

"This experience was, in a word, epic!" said Kusak. "I think we ALL needed to be a small part of it. Even if just a fly on the wall, to restore faith in humanity, and to remind us all, to be a little more like Bob."

Make getting around with your wheelchair easy by using a ramp

Give Wheelchair Vans Some Space, Damnit

Those ‘van accessible’ parking spaces have all that extra space around them for good reasons.