Like the look of the Bronco Sport but need to haul more stuff? Stay tuned. 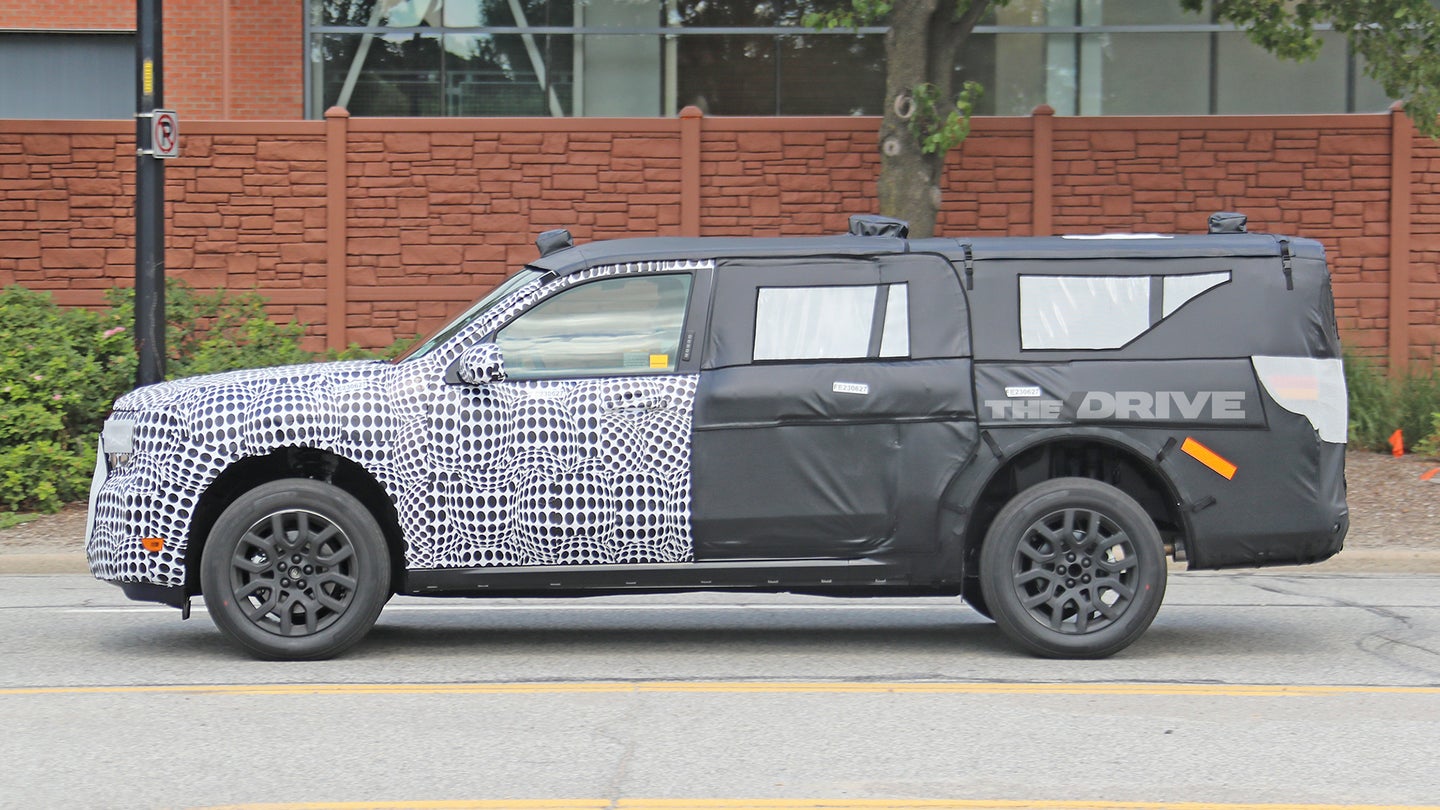 Look, the new Bronco line-up is cool and all, but if you need to stuff seven people into your Ford, the Bronco will quickly become less of a badass off-roader and more of a clown car. Fortunately for your would-be passengers, it looks like Ford is adapting some of the Bronco lineup's chunky design language into a larger truck that was seen testing around Ford's headquarters in Dearborn, Michigan last week. What exactly are we looking at?

UPDATE 6:00 pm ET: While our photographer on the ground said the prototype looked like a three-row SUV, many who’ve responded online following publication of this story argue it appears to be the upcoming Maverick or Courier small pickup with a cap over the bed. Automotive journalist and walking parts catalog Bozi Tatarevic pointed out that there's no axle stub visible in the rear wheel, meaning the vehicle is front-wheel drive; Ford has previously highlighted the fact that Bronco-branded SUVs will be AWD-only.

Tatarevic also noticed that its brake calipers are identical to the Bronco Sport, which is built on the same global platform rumored to carrying the Maverick. Our original story continues below.

To be honest, we don't know! But it sure is intriguing. The elongated prototype bears a resemblance to the old Flex from the side, but it rides higher. It looks too small for the second coming of the Ford Excursion that's rumored to be in the automaker's future plans. The front end appears to share the Bronco Sport's flat hood and upright stance. All we really know is that it's big enough to house three rows of seats and was spotted leaving Ford's development center in Dearborn, Michigan.

I'm pretty sure the octagonal grey blob up front isn't covering a blown-up version of the Explorer grille, since there's a clear bumper line bisecting it that's even more visible in the side profile shot. Either way, from the B-pillar forward, this SUV is really reminiscent of the Bronco Sport. We know Ford plans to expand the Bronco line-up to include electrified models and possibly even a pickup truck. Why not a three-row while it's at it?

Speaking of trucks, there's one other possibility here—Motor1 hazards a guess that we might be looking at a heavily disguised Ford Maverick, the automaker's upcoming compact pickup truck. We're not sure; with Bronco developing into its own sub-brand within Ford, it wouldn't make sense to have a vehicle with a different name copy the design language so closely. But in the absence of real information, we can't rule it out.

Anything is possible here, though. The Drive reached out to Ford for more information on this vehicle—fat chance—but if anyone knows what this is before Ford wants to talk about it, our tips line is always open: tips@thedrive.com.