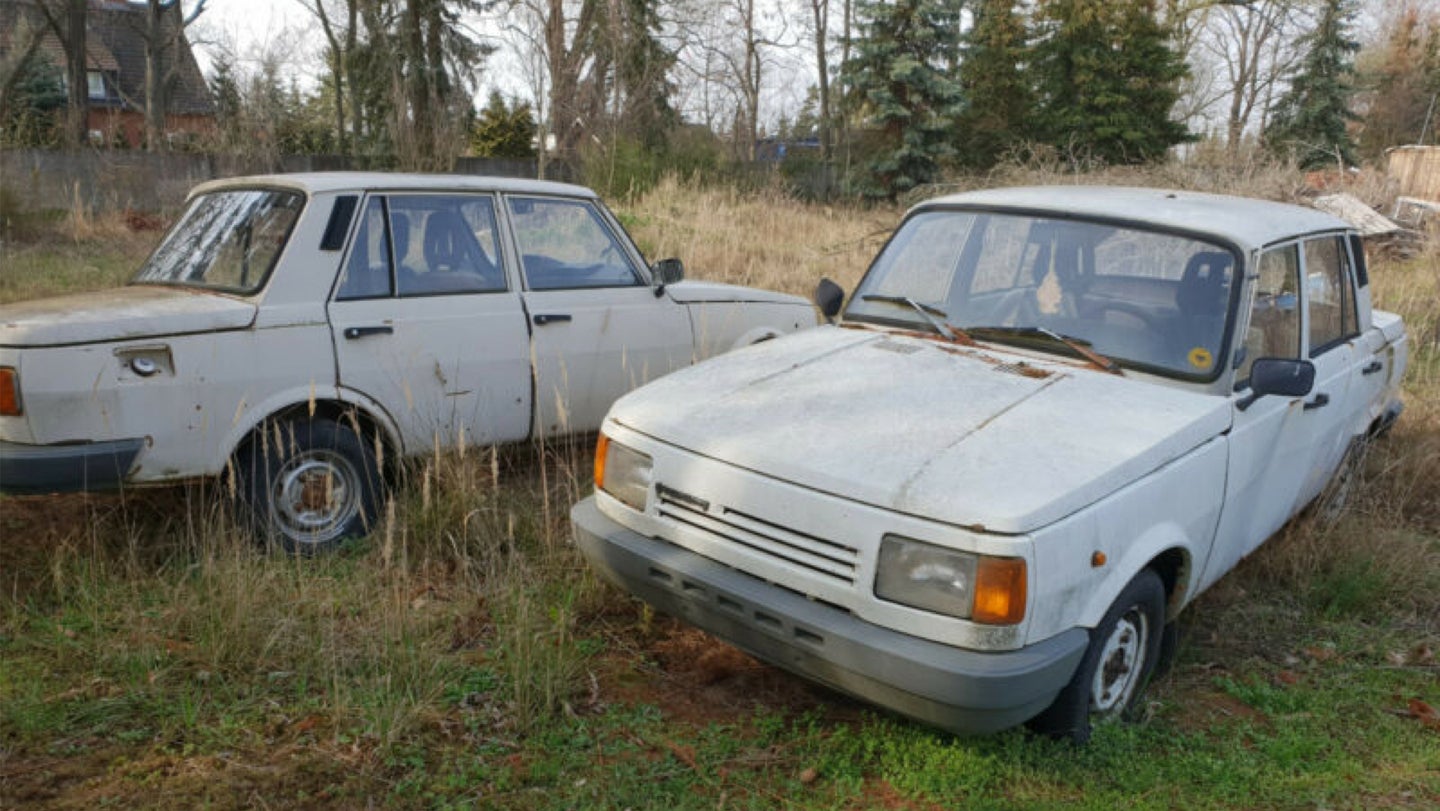 I'm sure you realize that right now in 2020, things are bad. Nothing gets better. There's seemingly no end in sight. No bottom to the pit of woe. Life keeps finding new and inventive ways to suck more. So, you might as well buy a terrible East German car that comes with a free varmint nest, or two.

The cultured among us may savor such a vehicle as a "barn find." Eastern Bloc kitsch is alive and well, and it's driving up prices of nice Trabants. You're bored, though. I can smell it. You shouldn't get a nice Trabant. You need one that's been left out in a pasture for several years and has several holes from goats who found its cotton-based Duroplast body panels to be a tasty snack. That's your ticket to the world of East German cars, baby.

Case in point: the EMW. Yes, E. One of BMW's factories was on the eastern side when Germany was split in two and the cars it made became EMWs, with the E standing for "Eisenacher," for the factory's location in Eisenach. Restored EMWs are expensive as hell, but you could have your very own, very frustrating entry into the world of confusing everyone who mishears the "E" in "EMW 340" for a relatively attainable $2,283 on Classic Trader. That one's almost nice, though, and I'm sure there are even worse examples out there sitting in someone's field. "I need this piece of crap out of here" is the ultimate starting point for shrewd negotiations, after all.

Of course, you could get a nice example to play this idea on slightly easier (but not actually easy) mode. Here's a Trabant 601 with recently refreshed mechanicals and some cafe branding on the hood, or a brown-over-brown Wartburg 353 Deluxe that's disarmingly pretty. If Florida wasn't one of the few places in worse shape than Texas and if I also wasn't in the middle of Recession II: Recession Harder With a Vengeance, I'd be tempted to call about that Wartburg myself.

But no! That's too easy. You're looking for the kind of deep mechanical suffering and woe that's bad enough to outshine the unending despair of our current moment. You need something with more character, fewer functional parts and more mice.

Perhaps that means searching the countries where these cars were common enough to get tired of in the first place. Places where it's perfectly normal to let the outdated family vehicle languish in a shed to the point where it becomes less of a car and more of a place for squirrels to hide their nuts. You know, many of those places we're banned from traveling to right now.

The highest form of automotive masochism is buying a used project car of unknown provenance sight unseen. By shipping over a hopeless basket-case car from the former Eastern Bloc, you will transcend your garbage existence into a higher, possibly worse plane of automotive woe.

I, for one, think spending $629 on an early Trabant parts car plus several times that shipping it over from Berlin is a quality life choice. Look at that minimal listing information! Extra bodywork included in the photos with no explanation! That claimed mileage of nearly 350,000! That's what you need in your life. Try to bring that parts car back to life, comrade.

If you'd like to go easier on yourself, consider this price-negotiable Hungarian $685 Wartburg 353. "Ran when parked" is a concept that transcends language and culture, and this one was only parked two years ago.

If that's far too much information in the ad, there's also this $457 Wartburg 353, whose only photo is the one at the top of this article. There are two cars in the only photo and the ad doesn't specify which one. It's a surprise! Isn't it time for some surprises that are only moderate risks to your health, like tetanus?

There will be much DDR-made weeping and gnashing of teeth, but it will be worth it. You'll have something more tangible to worry about. Something physical to distract you from the ever-present feeling of existential dread. What would you rather think about: public health policy, or how the hell to source parts for a car that isn't even listed on Rock Auto? Exactly. I'll take "grumbling at the tangible threat to my wallet and sanity that's sitting in the driveway," please.

Sure, you may have to repurpose some lawnmower bits or even make some parts yourself to get around that minor "parts availability" issue, but it's the journey that matters. You don't want that to be in a Dodge Journey. We're living through some truly weird, bad times, and the only real cure in the interim is a nest-filled Wartburg. Adopt a new rusty friend today.