Maserati Is Ditching Its V8s for Turbo Four and Six-Cylinder Engines: Report

You can say goodbye to that eight-cylinder opera. 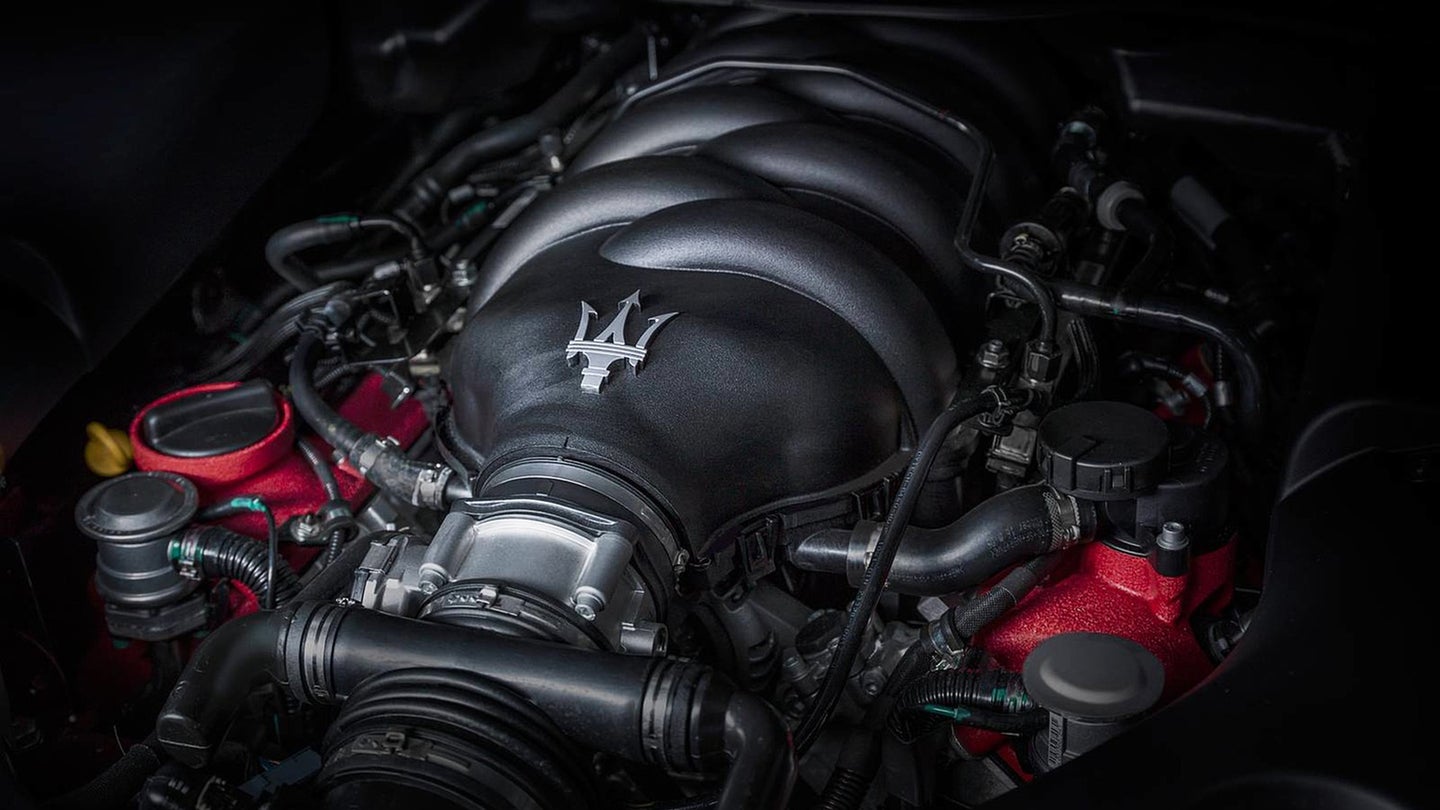 Maserati is one of those brands known for being a bit shouty. That's made pretty easy thanks to the turbocharged engines Ferrari supplies them with⁠—a 3.0-liter V6 and a 3.8-liter V8. But as we've highlighted, Ferrari's contract to provide Maserati with engines runs out soon, and Maserati does not plan to renew it. That's because in addition to its electrification plans, it's developing two new engines in-house to power future models⁠, reports Automotive News Europe.

These two engines, a 3.0-liter V6, and a 2.0-liter inline-four will be more efficient and produce fewer emissions. They also signal the end of V8 engines in Maseratis. The new GranCabrio, GranTurismo, and a yet-to-be-unveiled mid-size SUV will all have a 3.0-liter, twin-turbocharged V6. Even the brand's upcoming mid-engine supercar, the MC20, will be powered by this new engine. In the sports cars and the SUV, it's said to make between 523 and 542 horsepower. The MC20's power figure has yet to be announced.

This V6 will also come in an electrified version with more power, but Maserati has not gone into the specifics of how it's electrified. It could be anything from the sort of mild-hybrid system Mercedes employs on its 3.0-liter inline-six (perhaps with an electric supercharger), or a plug-in hybrid system where one of the two axles is powered by electric motors, similar to what Volvo uses on some of its hybridized T8 models.

What we know for sure about this engine is that it uses some interesting F1-related tech. Instead of a conventional layout for its cylinder head, the new engine has a pre-ignition chamber so that it can utilize what's known as Turbulent Jet Ignition. That should help it get close to⁠, or exceed the 572 horsepower of the current Ferrari-supplied 3.8-liter V8.

In case you're curious, Turbulent Jet Ignition is basically a tiny combustion chamber at the top of the cylinder that has its own direct injector and sparkplug. It's mostly closed off from the rest of the cylinder, but it has some tiny holes drilled into it so that hot jets of partially-ignited fuel and air can flow into the cylinder, where the turbulence caused by those holes allows the mixture to better fill the space. The result is an engine that can run much leaner with higher compression ratios for a cleaner and more efficient combustion cycle.

As far as I'm aware, this is the first time this technology will be used in a mass-produced road car. And if you're curious as to how much of a difference it actually makes, it's one of the technologies that allows Mercedes' Formula 1 engines to reach efficiencies of 50 percent , almost unheard-of in the world of internal combustion.

The new four-cylinder engine is decidedly less exciting. It's the same basic 2.0-liter unit used in the Jeep Cherokee and Wrangler, albeit with some unknown Maserati modifications. Alfa Romeo also uses this engine⁠—known as the GME⁠—as the base offering in its Stelvio SUV and Giulia sedan. The most powerful version makes 275 horsepower in the Stelvio.

Maserati plans to use it first and foremost on the Ghibli, where it will be joined by a 48-volt hybrid system for a little extra power and efficiency. This mild-hybrid, four-cylinder Ghibli is set to be unveiled on July 15th.

The Italian brand is going to need these new engines and their upcoming models to be a success, as well. The brand previously saw greater revenue due to the release of the inexpensive Ghibli, but its sales during the pandemic dropped by 46 percent in the first quarter of 2020. So while it may be sad to see Maserati V8s going away, it's a necessary cost-cutting measure that—while it may not be so pleasant to the ears—will hopefully allow the brand to thrive in the coming years.