Duct tape and silicone are no way to fix a broken frame, but that's only the start to this disaster of an import sale. 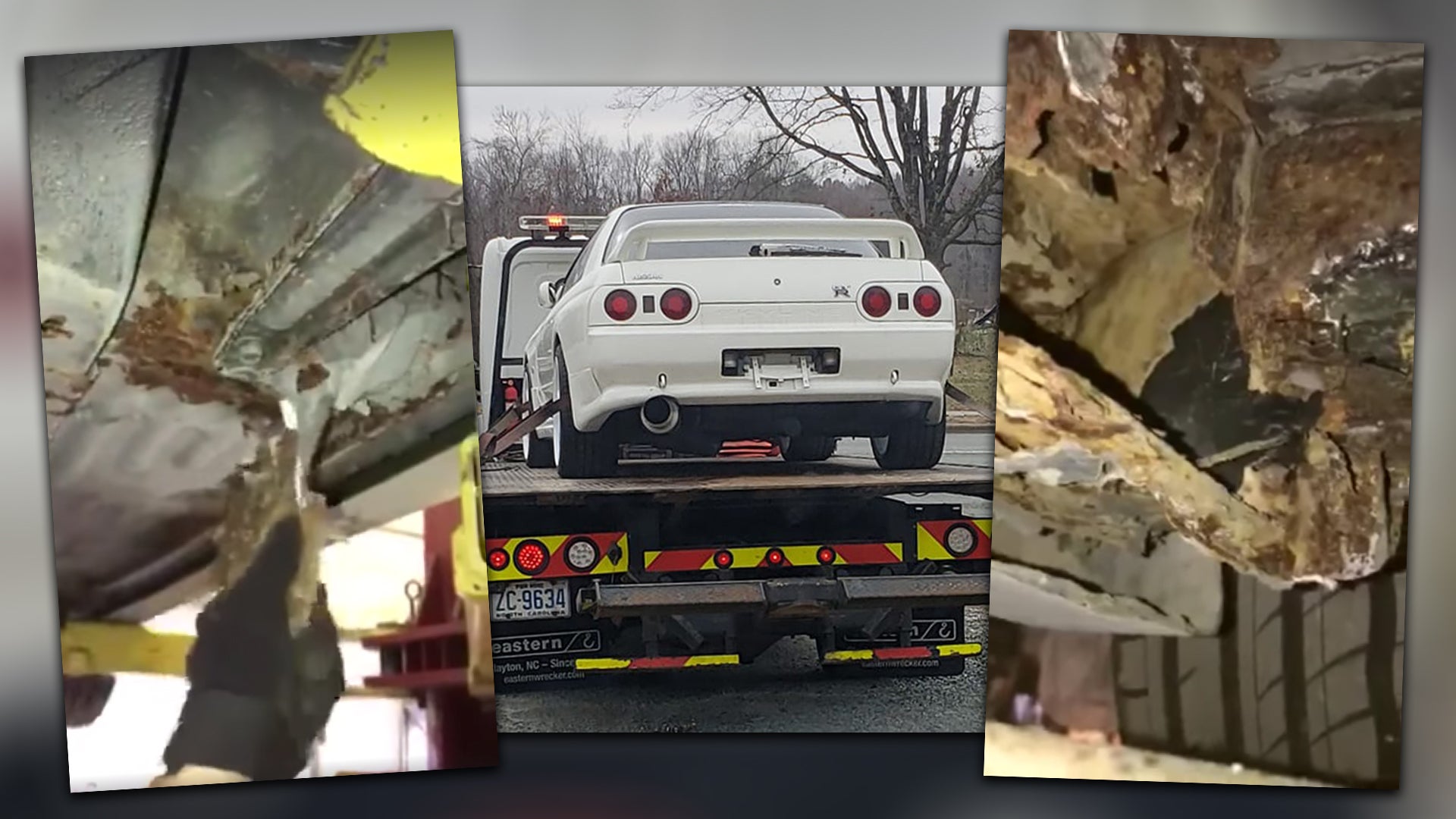 What is social media good for if not a classic "buyer beware" horror story? Publicly bashing a seller—or, in this case, a big-name vehicle importer—can flip their reputation in an instant, whether it's actually deserved or not. That's the tricky part about this R32 Nissan Skyline GT-R that went viral last month in a jaw-dropping video of the duct tape and silicon "repairs" done to its trashed, rusted-out frame. It looked like an open-and-shut case of a shady importer duping an unlucky buyer. But after talking with both the seller and the car's owner, we found the backstory is even messier than the ruined Skyline.

The 1990 Skyline in question was widely shared in early June when its new owner, a North Carolina man named Courteney Vann, leveled accusations of fraud and endangerment against the seller, Florida-based Montu Motors, regarding the condition of the car in a public Facebook post. He alleged that despite passing a remote pre-purchase inspection, the Skyline arrived in his possession with serious structural damage that made it dangerous to drive.

Imported cars are sometimes basket cases, so this might not sound too surprising to jaded readers. But really, you have to watch the accompanying videos Vann posted as evidence, which show a mechanic demonstrating how the R32's entire substructure has been pasted together with duct tape and RTV to cover up an obscene amount of rust damage. The rear subframe is completely detached on one side. It's legitimately shocking, and absolutely unsafe to drive.

All together, the videos racked up tens of thousands of views on Facebook, and even more on other platforms as people began to rip and share. Curious to hear how he ended up with such a disaster on his hands, we reached out to Vann for more information. And given the accusations, we also contacted Montu Motors for its side of the story and reached several employees who agreed to talk about the case on the condition of anonymity.

Down in Clearwater, Florida, Montu Motors obviously caught wind of the building blowback on social media as the videos spread last month, but the whole situation actually predates this year. Vann bought the car back in 2018, and a customer service rep told us Montu has been trying to remedy the situation since May of 2019. If that timeline already sounds a little strange, buckle up.

The full story involves over a hundred emails, hours upon hours of phone calls and now a frenzy of litigation that all started with a classic he-said, he-said situation. What's not in dispute is that in April of 2018, Vann purchased the JDM Nissan Skyline for $25,000 via Montu Motors, which handled the importation process. A third-party inspector in Japan verified its decent condition, and Montu also gave it a quick once-over when it arrived here in the States before passing it off to Vann, who was ecstatic to buy his first Skyline.

The car wasn't in the best shape to begin with, but somehow, everyone missed (or claims to have missed) the atrocious repairs to the frame until May of 2019, when Vann originally filmed the underside.

We know, we know—that's a wildly unsatisfying answer, and probably untrue. Even if you buy that the remote inspector and Montu's mechanics didn't literally see it, that means they weren't trying to look very hard to begin with. Montu employees admit the company shares responsibility here. But how exactly the dangerous Skyline ended up reaching a customer's hands a continent away is still a question mark.

Vann told The Drive he tried and failed to reach Montu Motors via email multiple times in the days following the ugly discovery. Frustrated, he eventually filed a Better Business Bureau complaint, at which point Montu employees say the shop became aware of Vann's situation. The two sides began a correspondence in May of last year and came to the understanding that someone in Japan had done this car dirty.

Around that time, Vann says the R32 had been parked due to a failed clutch cylinder and power steering pump, along with what he described a nasty exhaust leak (remember, basket cases). But even though the destroyed frame should've kept it parked permanently, Vann fixed those mechanical issues and further modified it with a new turbo setup, making it much faster than stock. And obviously, far more dangerous given its condition.

This decision on Vann's part would become a big point of contention as he negotiated with Montu about a replacement car for the rest of 2019. The shop claims that Vann drove the car regularly during this time, which would undercut his viral accusation that Montu put his life in danger by selling it to him, and points to his post-discovery modifications as proof Vann intended to keep the car. Vann confirmed to us that he'd take it out when other people "weren't on the roads," which frankly didn't make it any less dangerous for him.

And here's another from March 2020, about two months before the viral Facebook callout of Montu:

It's a bad move to drive it with that type of frame damage—period. Sure, it sucks to spend nearly $25,000 on a car and never use it, but it would be even worse to end up hospitalized from a low-speed impact with a fire hydrant.

Vann claimed it wasn't until September 2019 that he was able to take the car to a body shop, where it was determined the Skyline was beyond saving. Montu offered to find another shell in Japan and ship it over for Vann, and they both agreed to go forward with that plan. A second car was never imported, though, as each one Montu says it located was sold to another party shortly after.

“Information started changing so much that I couldn’t trust them," Vann said.

After yet another round of propositions, from Montu agreeing to buy the car back in its stock form to saying it would personally remove the upgraded turbo from Vann's R32, a resolution couldn't be found. This chunk of the story is especially puzzling as both sides point fingers at the other for backing out on agreements, all while saying they each have emails to support their case, which can't be published in full because of the impending litigation.

Really, there seem to be countless potential resolutions in this whole saga that fell apart at the last second. Those modifications Vann made after reporting the frame damage were a persistent hangup—Montu wasn't willing to pay extra for them if it bought back the car, and it seemed to view them as proof Vann was trying to have his cake and eat it too. Vann says he modified and drove the car pretty much because it was there in his garage, and if he was in the midst of working out a replacement, why not have some fun with the doomed beater for now?

The final broken agreement was that Vann would deliver the car to Florida so that Montu could replace the turbo with a stock setup. Then, the shop would pay off Vann's loan and take back the busted Skyline. Vann claims Montu suddenly called off the deal on June 3 after dropping out of contact for over a month, partially due to the COVID-19 shutdown.

Attorneys have since been retained by both sides, all while they're still battling it out over social media. As a result of the scuffle, Montu Motors has seen its public ratings plummet while the Facebook cavalry has hazed the shop for weeks on end. The GT-R is still broken, meanwhile, and it likely won't be fixed anytime soon.

Good Lord, what a mess.