Yesterday's pricey crash was just the latest for the former co-owner of Gold Rush Rally. 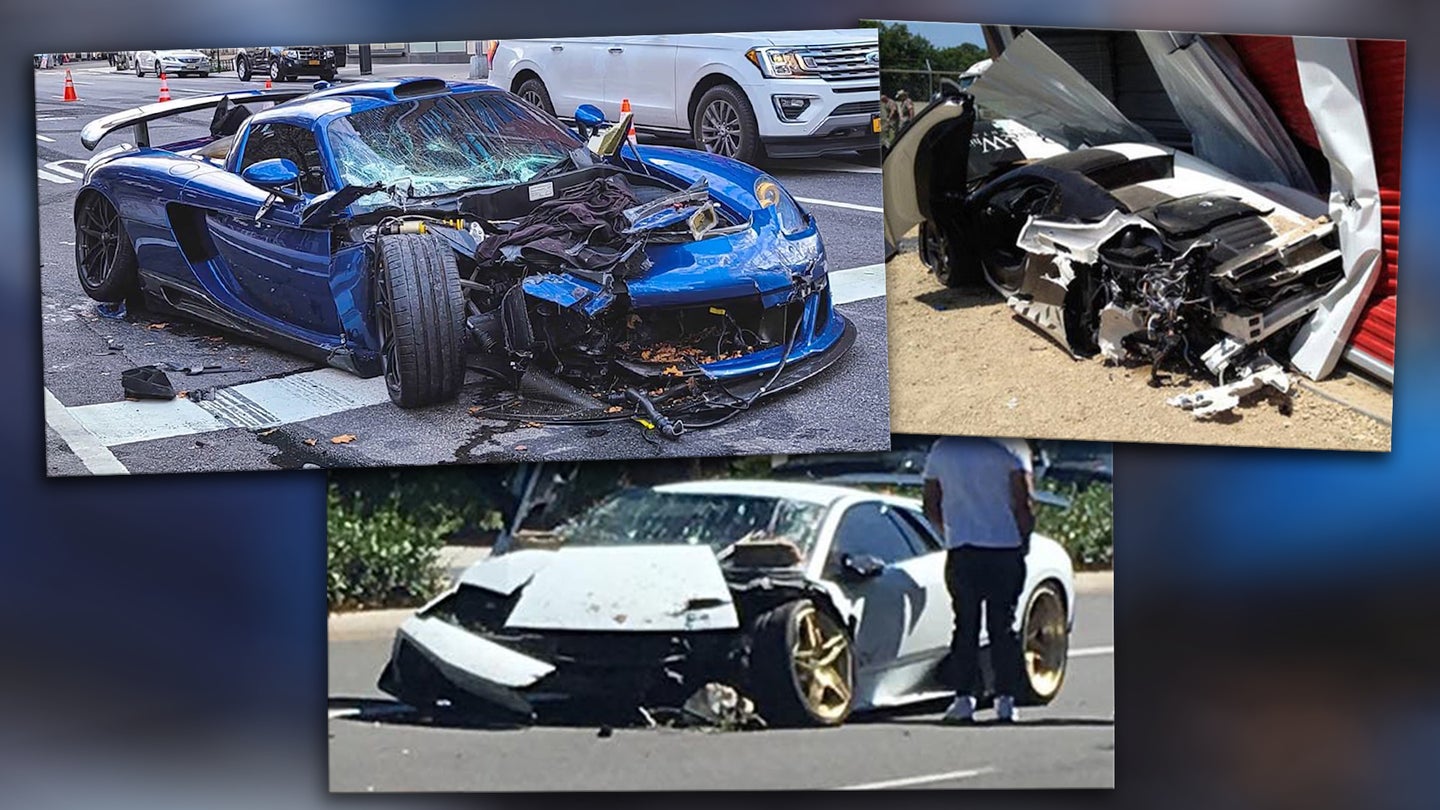 Semi-notorious supercar collector and former Gold Rush Rally co-owner Ben Chen was charged with reckless and drugged driving on Tuesday after embarking on a five-car hit-and-run spree in Midtown Manhattan with his rare Gemballa-tuned Porsche Carrera GT. The $800K wreck drew worldwide attention—it's not every day you see a 1-of-25 performance machine being used as a battering ram. Nor is it every day you come across a driving record like Chen's.

By our confirmed count, this unfortunate Gemballa Mirage GT is at least the third six-figure exotic he's trashed over the last ten years, with rumors about a much higher count and associated cover-ups splashing around on social media and the Luxury4Play forums, a company Chen helped create. But even if you just stick to the three on-the-record smashes, Chen has single-handedly destroyed more supercars than most people will ever even touch in their lifetimes, let alone drive.

We should note that this isn't internet shame without a purpose. Chen clearly drives with a complete disregard for the rules of the road and anyone adhering to them—even if you can't summon the rage right now to be mad at a rich guy trashing exotics like used Corollas, it is somewhat astounding to see how much a wealthy automotive influencer can get away with while consistently endangering others on public roads. If you've got information or photos about the missing wrecks that you want to share in confidence, get in touch at our tips email address below.

The first viral smash-'em-up with loads of documentation took place in 2013 during that year's Gold Rush Rally, which itself has a reputation for supercar drivers doing bonehead things. Chen was no exception. Shortly after the rally left Dallas, KLTV reports, Chen lost control of a rented McLaren 12C Spider at triple-digit speeds and flew quite a ways off the road before impacting a roadside storage unit in Mt. Vernon, Texas, roughly 100 miles away from the day's starting point. Chen also had a passenger at the time, but both escaped injury. Meanwhile, the black McLaren was utterly destroyed. Chen was ticketed for reckless driving.

In September 2016, Chen crashed his Lamborghini Murciélago LP670-4 SV after being turned away from a car show for poor behavior on the road. Chen then demonstrated even poorer judgement, spinning into a curb as he drove away from the show. This time, Chen owned up to the crash in a post quoted by Wrecked Exotics:

"Was kinda driving like an idiot all morning near the Piazza Gran Turismo event in Westlake Village even though they had signs up about driving slow and not revving. They turned my car away at the gate and so I went and parked somewhere else.Then the police approached me in the parking lot at the event to discuss my antics and so I played that off and decided to leave. About a mile down the road, in a moment that lacked judgement and talent, I spun the car into the curb trying to look cool. Not so cool anymore...  :-\PS: Thankfully my precious dog Murcie who was rolling with me was okay."

His car was one of only three Murciélago LP670-4 SVs in the United States that came from the factory with a manual transmission, making this an even bigger loss for Lambo fans everywhere. One of the last of a now-dead breed, snuffed out by an imbecile.

Many reports on Chen's Gemballa crash also note that he damaged a Mercedes-Benz CLK GTR, but this one was relatively tame compared to the other two. Chen's very low, AMG-made, one-of-25 CLK GTR scraped its nose, undercarriage, and tail as it left a steep gas station driveway straight-on as opposed to at an angle, courtesy of DPCCars. The expensive-sounding crunch happened during Monterey Car Week in 2015, but it's minor compared to the other big crashes he's been in.

It feels like this list of damaged supercars should be longer for a guy whose reputation for aggressive driving precedes yesterday's charges. Evidence abounds in videos like the one embedded above, which shows Chen racing the doomed Gemballa Mirage GT against a BMW M4 in Los Angeles.

And in fact, it very well could be longer: Commenters have weighed in here, on Instagram and elsewhere to talk about other wrecks that have apparently been scrubbed from the internet. There are unconfirmed reports of a Bugatti Veyron 16.4 Super Sport, a Mansory-tuned Mercedes SLR McLaren, an Audi R8 and more falling to his hand, as well as allegations that Chen paid to have photos and videos of those crashes removed from the Luxury4Play forums.

Again, we cannot confirm any of those incidents yet. But if you've got any corroborating details to share, please get in touch at tips@thedrive.com. Tuesday might be his last time behind the wheel for a while, though. It seems karma can catch up with anyone, even someone hauling ass in a Porsche Carrera GT.