Not a headline we expected to write today. 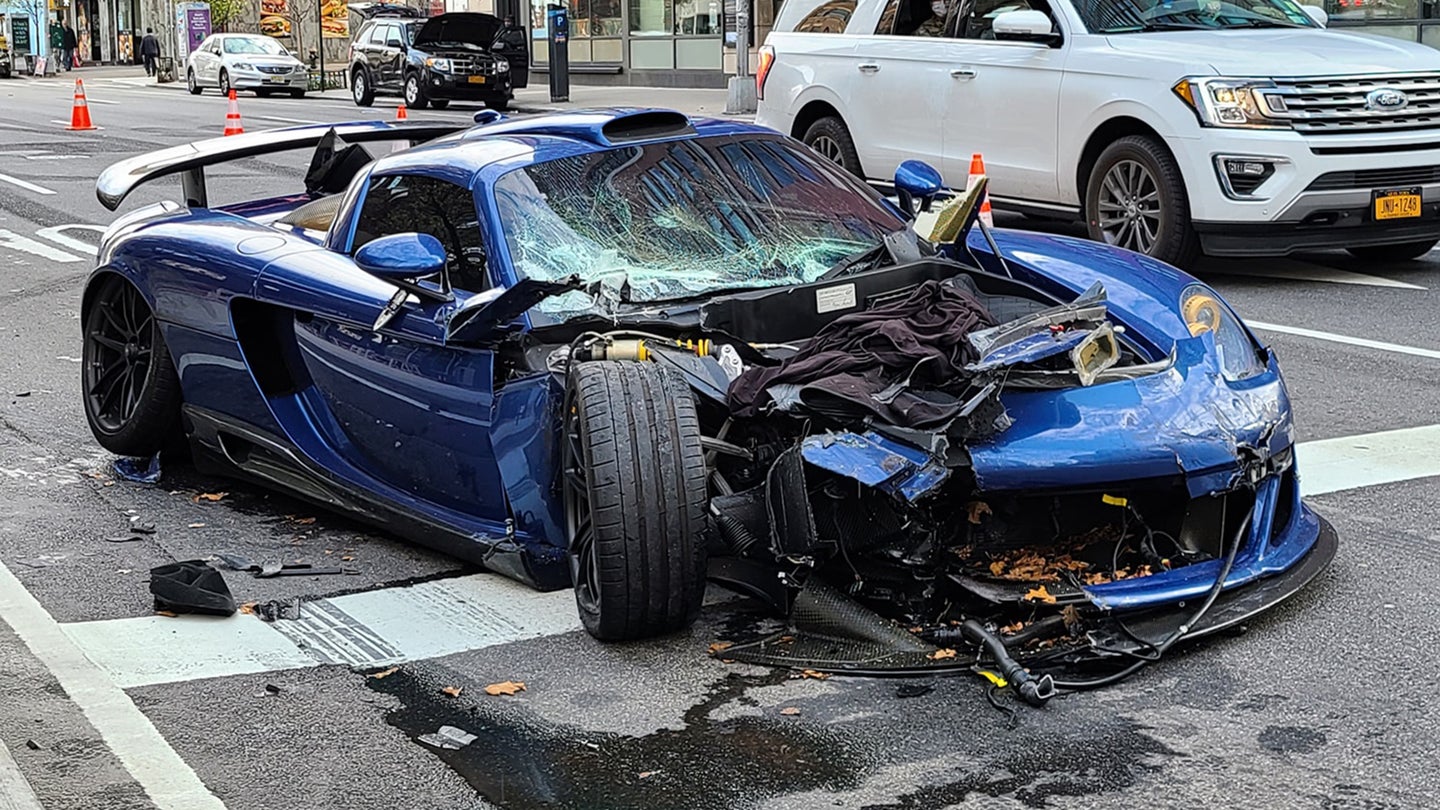 Life in New York City is anything but normal these days. Still, it was a shock to see the driver of a rare Gemballa-tuned Porsche Carrera GT leave a trail of destruction in Midtown Manhattan at 7:30 in the morning on Tuesday, smashing into multiple cars and attempting to flee the scene before being arrested and charged with drugged driving by New York's finest. Now The Drive can confirm that the wheelman was none other than the car's owner: Thirty-three-year-old Benjamin Chen, a well-known supercar collector and former co-owner of the notorious Gold Rush Rally.

Editor's note: Following publication, Gold Rush Rally reached out to clarify that Chen is a former co-owner of the organization, having been heavily involved with it since its second year before a mutual parting of the ways in 2019. Though Chen has been universally described as such in media reports on his antics for years, he is evidently not the rally's co-founder. Our story has been updated throughout to reflect this new information — KC

The Drive obtained a summary of the NYPD arrest report, which states that Chen was the driver and was arrested for reckless driving and operating a motor vehicle impaired by drugs. Here's the statement in its entirety:

On Tuesday, April 7, 2020 at approximately 0730 hours, officers responded to a motor vehicle collision in the vicinity of West 44 Street and 11 Avenue, within the confines of the Midtown North Precinct. Upon arrival officers observed a 33-year-old male operator and sole occupant of a 2014 Porsche Gemballa Mirage GT conscious and alert. Further investigation revealed that the operator of vehicle #1 struck the rear of a parked unoccupied vehicle #2 and fled southbound on 11 Avenue in his Porsche The motorist proceeded to strike vehicles #3,4 and 5 that were also parked and unoccupied in the vicinity of West 44 Street where his vehicle came to a rest. The suspect was taken into custody at the scene.

The following individual was arrested and charged with the above incident:

The jarring images of the wrecked Gemballa Mirage GT, a 1-of-25 custom build by the German tuning powerhouse, spread rapidly across social media in the immediate aftermath of the crashes. Video footage later revealed that Chen lost control of the supercar on arrow-straight 11th avenue and spun into a parked Toyota Sienna at high speed. Despite heavy front-end damage, he was able to drive away, striking three more parked cars before his brief and glorious flight came to an end.

Early news reports described the car as possibly being stolen. But commenters quickly pointed out that the man being ordered out of the leaking wreckage by a New York State trooper bore a strong resemblance to the owner of such an easily identifiable vehicle: Ben Chen. One video shows an officer asking him where he's trying to go as he briefly revs the engine.

Chen's gained a measure of fame in the car world as a visible young supercar collector and a booster of the Gold Rush Rally, which he co-owned for most of this decade before selling his shares in the organization in 2019. If you're not familiar, it's an annual multi-state supercar owner rally that's known for its...questionable behavior and at least a few major accidents. Chen himself wrecked a McLaren 12C Spider during the rally in 2013 after losing control "at a high rate of speed" on a Texas highway and careening into a roadside storage unit complex. He walked away with a ticket for reckless driving.

The Carrera GT was already a handful out of the box, with a 603-horsepower V-10 connected driving the rear wheels through a six-speed manual transmission. Gemballa pushed it to 670 horsepower, added a whole bunch of lightness, and swapped in a coilover suspension. Chen talked about the extensive conversion process in this Dupont Registry article from 2014; he also said he planned on driving it "at least once a month, [as] it is not good for CGTs to sit."

Some might recall another high-profile crash involving a Porsche Carrera GT: that which claimed the lives of actor Paul Walker and collector Roger Rodas in 2013. Though excessive speed was listed as the official cause there, we've written at length about how the real culprits were old, underused tires on a vicious machine. It's still too soon to draw any deeper similarities between that accident and this one. But Chen's not wrong about the risks of letting a car like the GT sit. It's just too bad he didn't also see the danger in getting behind the wheel this morning.