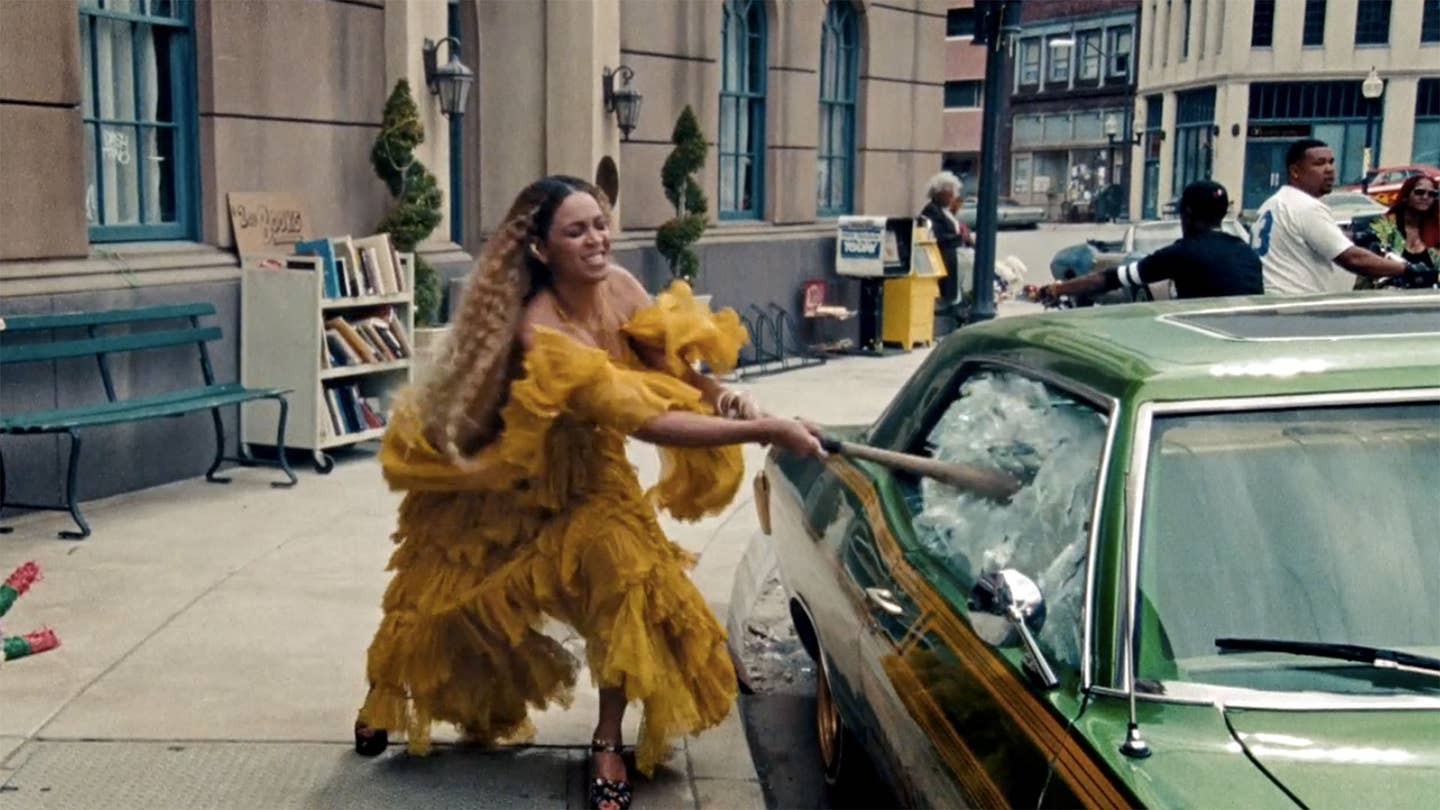 In what has become her style, last Saturday, Beyoncé released "Lemonade," a surprise "visual album" that paired an 18-track record with an hour-long video. Though the delivery was typical—late night, explosive, making for an apoplectic internet and instant memes—the content was uncharacteristically personal for an artist who, until last week, hadn't given an interview in two years. Here's what we learned: All is not well with the nation's other First Couple. The leaked footage from the Met Ball afterparty—in which a clearly enraged Solange Knowles kicked and hit Jay Z while Beyoncé stood by eerily quiet—hinted at what "Lemonade" confirms. Beyoncé has suffered infidelity at the hands of Jay Z.

He cheated, and she's mad.

Though Beyoncé's righteous anger seems to have since subsided—"Lemonade" was released exclusively for a time on Tidal, Jay Z's streaming service, and the final frames show the couple embracing—it lives in perfect rendering in "Lemonade"'s second scene, in which Beyoncé in a voluptuous, yellow dress marches through a too-bright soundstage smashing example after example of American muscle cars. It's a stylized take on a scorned woman's revenge, the likes of which we've seen from Jazmine Sullivan, Carrie Underwood and Taylor Swift, but undertaken on a scale and with an overwhelming, oversaturated visual palette that befits Queen Bey. Now and again, a ball of fire is unleashed to underscore the intensity of her anger, because the world's biggest pop star in a flouncy Roberto Cavalli gown demolishing cars with a Louisville Slugger named "Hot Sauce" might not illustrate the rage in rich enough reds.

The images are more than pleasing. Beyond being just an artistic and commercial project, "Lemonade" is a political statement. It's a love letter to black women, a document of oppression and flaming baseball bat on the lawn of patriarchy, illustrating the particular role women unwillingly inhabit in many relationships: surging through frustration, pain and betrayal, picking up the pieces of a once-unblemished love in an attempt to cobble together the semblance of a happy union. (That is, lemonade out of lemons.) Unlike the narratives in the other pop singers' videos, Beyoncé isn't just smashing some simulacrum of Jay Z's ride.

The kind and number of cars Beyoncé destroys is no mistake. As a idol to many, particularly black women, Beyoncé has the wealth, personal fortitude and agency that most of her fans lack. She's not wrecking her husband's car with a big audience; she's wrecking every cheating man's beloved hunk of mid-century iron. (There's nary a typically feminine car in the lot.) Amplifying her own catharsis, Beyoncé brings elegance and powerful savagery to a role she's never inhabited: jilted wife. With every swing of Hot Sauce, she's redefining the part, lending characteristic swagger and beauty to a position that leaves so many in a wan, devastated heap. Though the majority of Beyoncé's fans will never have the opportunity to exact such theatrical revenge and howl in such magnificent rage, they now have a secondary experience of it, one that might inspire action on a more personal scale. Beyoncé's paean to female pain and power should inspire smaller poems.

Like everything in these videos, the chosen automotive victims seem intentional. It's not a period piece—modern quads and dirt bikes flit through the frames—but the sheetmetal has a single cultural location. These are the cars boyfriends wrench on during weekends off. These are the coupes men bring home after bonuses. These are the old-fashioned, everyman's limos that house all manner of infidelity—earring in the glove box, and the like. These Caprices, Galaxies and Tempests are the buzzwords of an older school of relationships: the capricious mistress, the worlds of hurt, the sometimes physically-threatening storm of anger of a jealous boyfriend. Like the wrecked cars that end the video, they're best left to be collected by the junkyard. Beyoncé and the bat have assigned all that to the past.