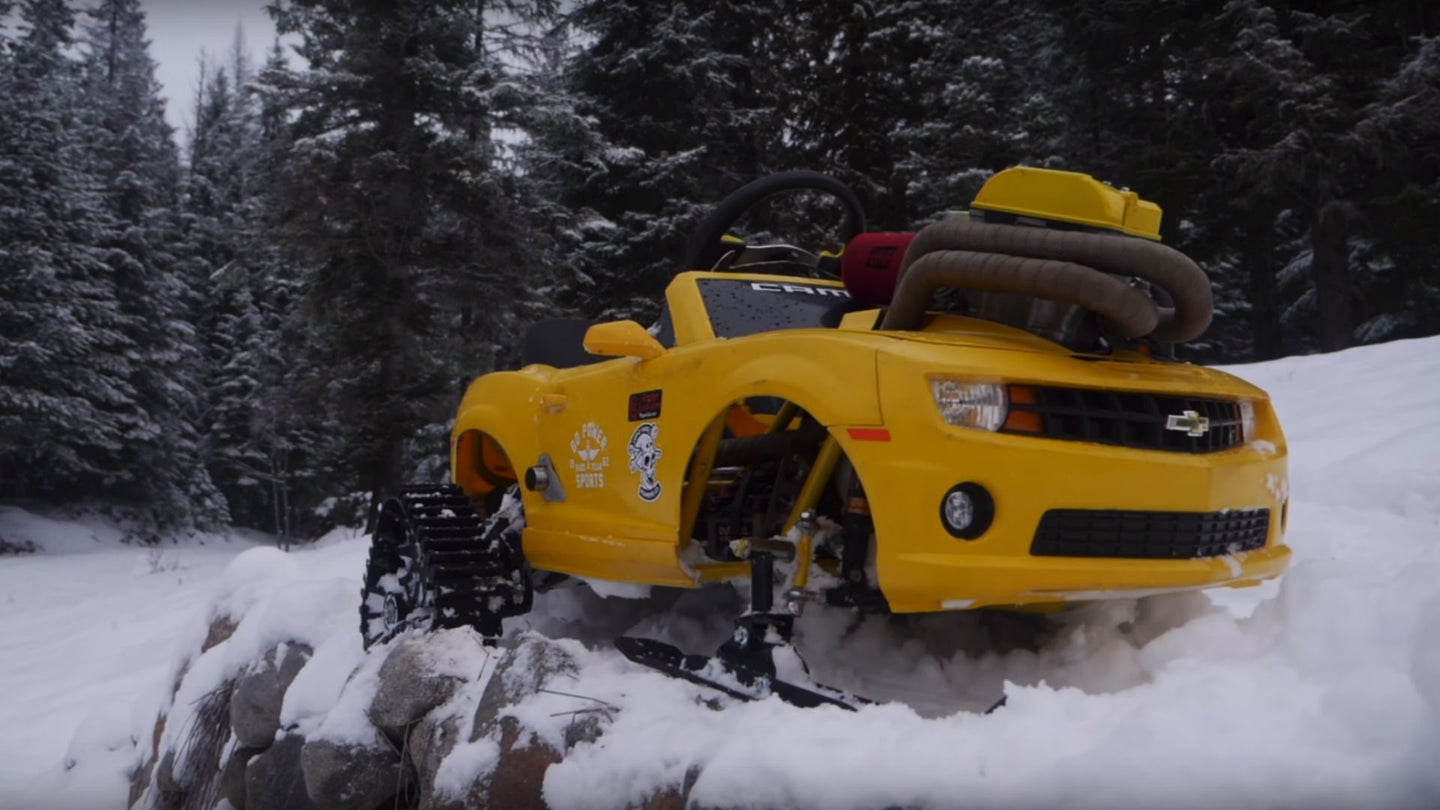 If there's one thing you can say about the crew at Grind Hard Plumbing Co., it's that they'll go to drastic lengths for a good bit of fun. We've covered their antics—most of which include tiny kid cars and all-too-enormous engines—in the past, and now they're back with more. This time, though, their creation has a more specific purpose: shredding through the snow.

Gone is the 24-volt battery that once powered this toddler-sized Chevrolet Camaro and in its place is a 500cc Polaris ATV engine. If you're a faithful watcher of Grind Hard's YouTube channel, you'll recognize this Frankenstein creation from previous clips. The guys decided to go all-in for winter and ditched the car's normal tires for all-terrain tracks, resulting in a micro-snowmobile of sorts.

Similar to the dirtbike-powered, Moab-tackling Barbie Jeep and 70-mile-per-hour kiddie Mustang, this Camaro is a catastrophe waiting to happen. That's what makes it's so entertaining. But how is it even possible to piece together such a wild Power Wheels car?

As we all know, you can buy virtually anything on the Internet and the opportunities expand when you start shopping around the Chinese market. That's how the team stumbled upon the perfect set of snowmobile tracks and miniature skis on Alibaba. The project wasn’t without complication, however, as everything was far from plug-and-play. A considerable amount of custom work and fabrication was needed to adapt the tracks to the kiddie Camaro’s output shafts, and don't forget the time and effort it required to swap the ATV engine in to start with.

Thanks to some incredible ingenuity and the skillset of a few resourceful Idahoans, the kiddie Camaro transformation was a success. It's documented in a nearly half-hour-long YouTube video and the result is nothing less than spectacular.

Of course, you also get to see them hoon the Camaro through the snow. Without that, this would all be for nothing, right?

Talk about a real Power Wheels.