Sounds like a parental threat come true, but it’s actually the BedRyder. 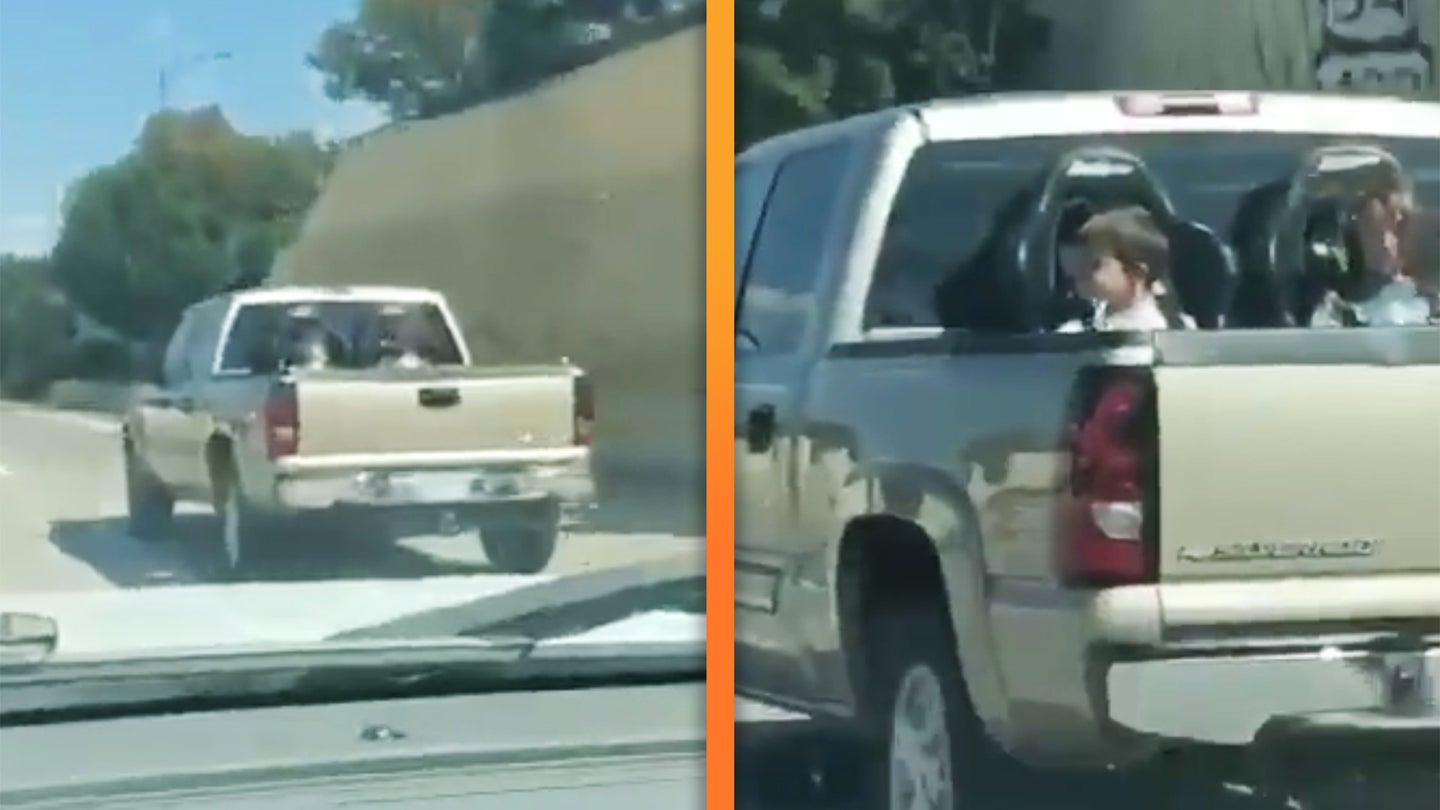 It's a threat every parent has made at least once: If you don't pipe down back there, I'll make you ride home on the roof. A viral video from earlier this month appeared to show one pickup driver in Kansas make good on the promise, hauling down the highway with two young kids strapped to rear-facing car seats in the bed, wind and road noise blissfully drowning out their complaints over not stopping at McDonalds. A bit shocking, yes—but a closer look reveals those are no ordinary car seats, and the whole scene is in fact perfectly legal.

First, the basics. The video was recorded on Route 54 outside Wichita last month and first uploaded to SnapChat with caption "Tf is this even allowed." Were those regular old child car seats bolted to the Chevy Silverado's bed in some homebrew arrangement, then this would very much not be allowed. But the twin jump seats are actually the work of a now-defunct company called BedRyder that specialized in adding legal al fresco seating to any midsize or full-size pickup.

Before ceasing operations this past winter, BedRyder sold a basic $750 frame-and-seat combo that bolted to the floor of the bed in the mold of the Subaru BRAT's jump seats. You're forgiven if you haven't heard of the company; the futile, decade-long saga to get it going pretty much peaked with an unsuccessful Shark Tank appearance in 2015. More important to today is that company founders George Conway and Carey Hide developed the product as a safer way for their children to live out their memories of riding unsecured in the backs of pickup trucks. So the BedRyder meets all relevant U.S. Federal Motor Vehicle Safety Standards; it's legal in all 50 states, even those that normally ban any passengers in a pickup bed outside agricultural work or parades.

It takes a keen eye to recognize those seats in the grainy video as BedRyders—here's an equivalent unit close up—and most commenters have run with the idea that the driver is clearly breaking the law and putting his kids at risk. That second part is a worthy debate. They look young, there's no sliding rear window through which they could communicate with the driver, and of course an exposed jump seat is not as safe as the cabin.

Somehow we're guessing the kids are cool with it. And like we said, it's legal. Kansas law says that anyone over the age of 14 can ride anywhere (and at any speed) in a pickup truck bed, properly restrained or not. It is an agricultural state, after all. But even if these kids are under 14, here's how the law reads verbatim:

"It shall be unlawful for any person under the age of 14 years to ride on any vehicle or upon any portion thereof not designed or intended for use of passengers when the vehicle is in motion."

It hinges on the phrase "not designed or intended for use of passengers." A pickup truck bed as it leaves the factory is certainly not designed nor intended to carry people. But add in a set of federally-approved jump seats and suddenly it is—or at least part of it is, leaving the rest of the truck bed as the "portion thereof" where riding would be still illegal for a child

Still, we admit brandishing that argument and the safety credentials of a defunct company might not convince a skeptical state trooper like the one who tweeted out the relevant section of the Kansas code in response to this video's spread. It might best to save the BedRyder for surface streets.