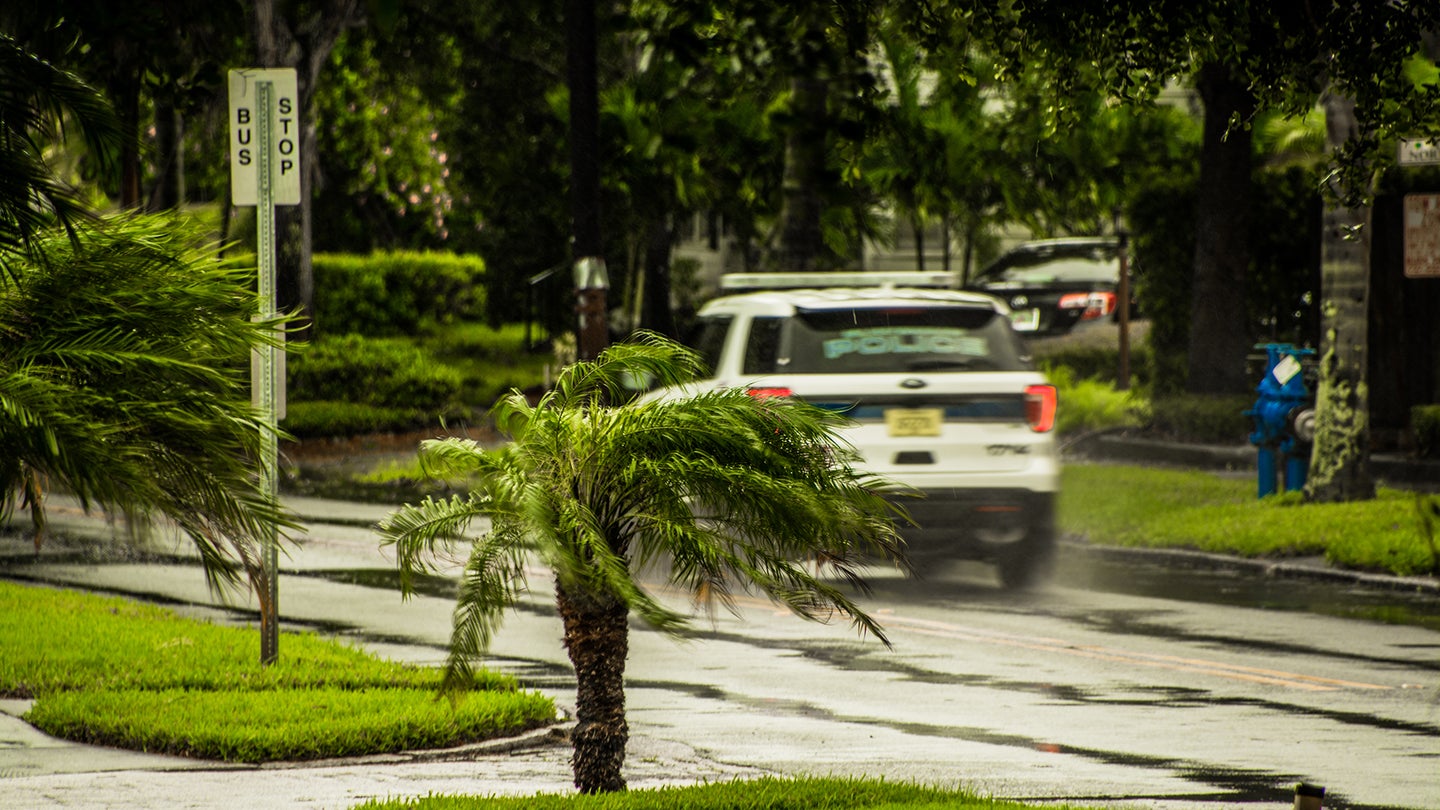 I live in St. Petersburg, FL and just had the two most stressful and hellish weeks of my life. As Hurricane Irma made its way through the Caribbean as a Catagory 5 storm, Florida was sent into a panic. I've lived in Florida since 1980 and have never been this concerned about a hurricane before. Irma was the largest and most powerful hurricane we've ever faced. In the week before the storm reached us, I did everything possible to protect my home and to prepare for impending doom.

Trees were trimmed. The deck was cleared of all furniture and other things that would become airborne. The yard was tidied up. The roof was cleared off all debris. The gutters were cleaned. Basically, a year's worth of seasonal home projects were all done in a matter of days.

If you ever had the pleasure of preparing for a major hurricane, you know what I'm talking about. You need to buy everything you might possibly need for several days after the storm as stores might not be open for you to buy things as you normally would. Grocery stores and gas stations were cleaned out. Things that were ordered via Amazon to avoid having to hunt them down at a store never arrived. You can't buy anything that is remotely perishable or requires cooking. On top of trying to stock up on food and water for after the hurricane, just finding food to eat in the days leading up to it was becoming a problem.

Through the chaos of prepping, bulk shopping for canned goods, and trying to keep the car full of gas, there was a level of civility between everyone. We were all in the same boat. Everyone was scared and everyone was nice to each other. I saw no fights for food or water at the store. Even as the track changed and put us in Irma's crosshairs the day before landfall, the chaos of making that last trip to the grocery store was a polite chaos.

I live just 1,000 feet from the water, but am out of the flood zone. Half of my neighborhood evacuated due to the risk of being flooded. Sunday was oddly calm. No one was really on the road. Everyone was hunkered down at home waiting for the power to go out.

We lost power at 4:08 pm on Sunday and it was off for six full days. After the power was gone on Sunday, all we could do was wait for Irma to pass and hope for the best. At sundown, it was practically pitch black outside. There was still a dim glow to the clouds from the sun, but at street level, you couldn't see much. The worst of Irma arrived around midnight and lasted until around 4:00 am. As the winds howled less by 5:00 am, we finally got some sleep.

After sunrise on Monday, I joined those in my neighborhood outside to assess the damage. Everywhere I walked didn't look too bad. Mostly minor damage plus some downed trees and power poles. Monday was relaxing as we discovered our house sustained no damage at all. Not even one shingle from the roof was lost. We had no power, but almost 80% of our county was without power as well. 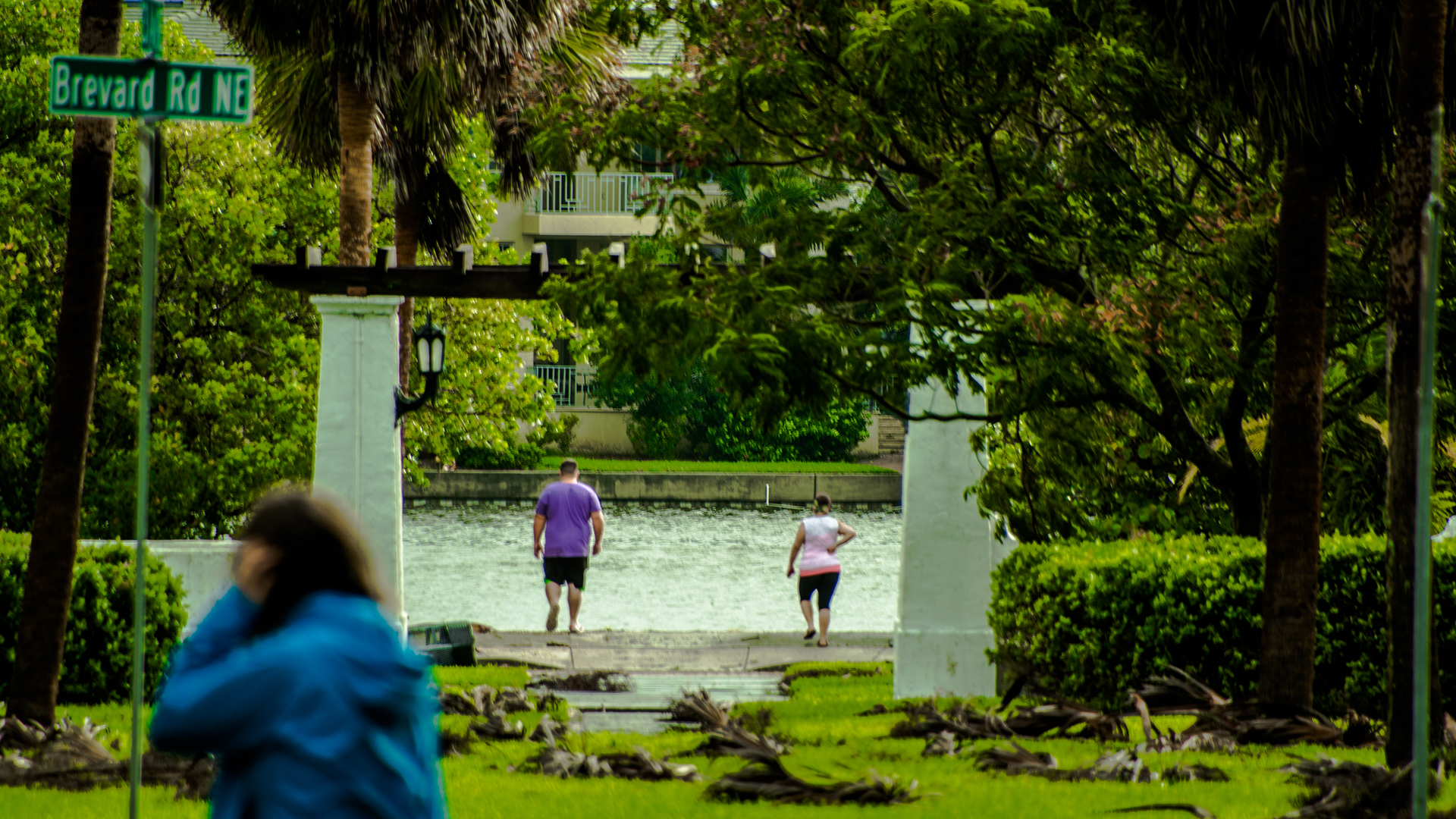 People out on Monday morning surveying the damage. Gabriel Loewenberg 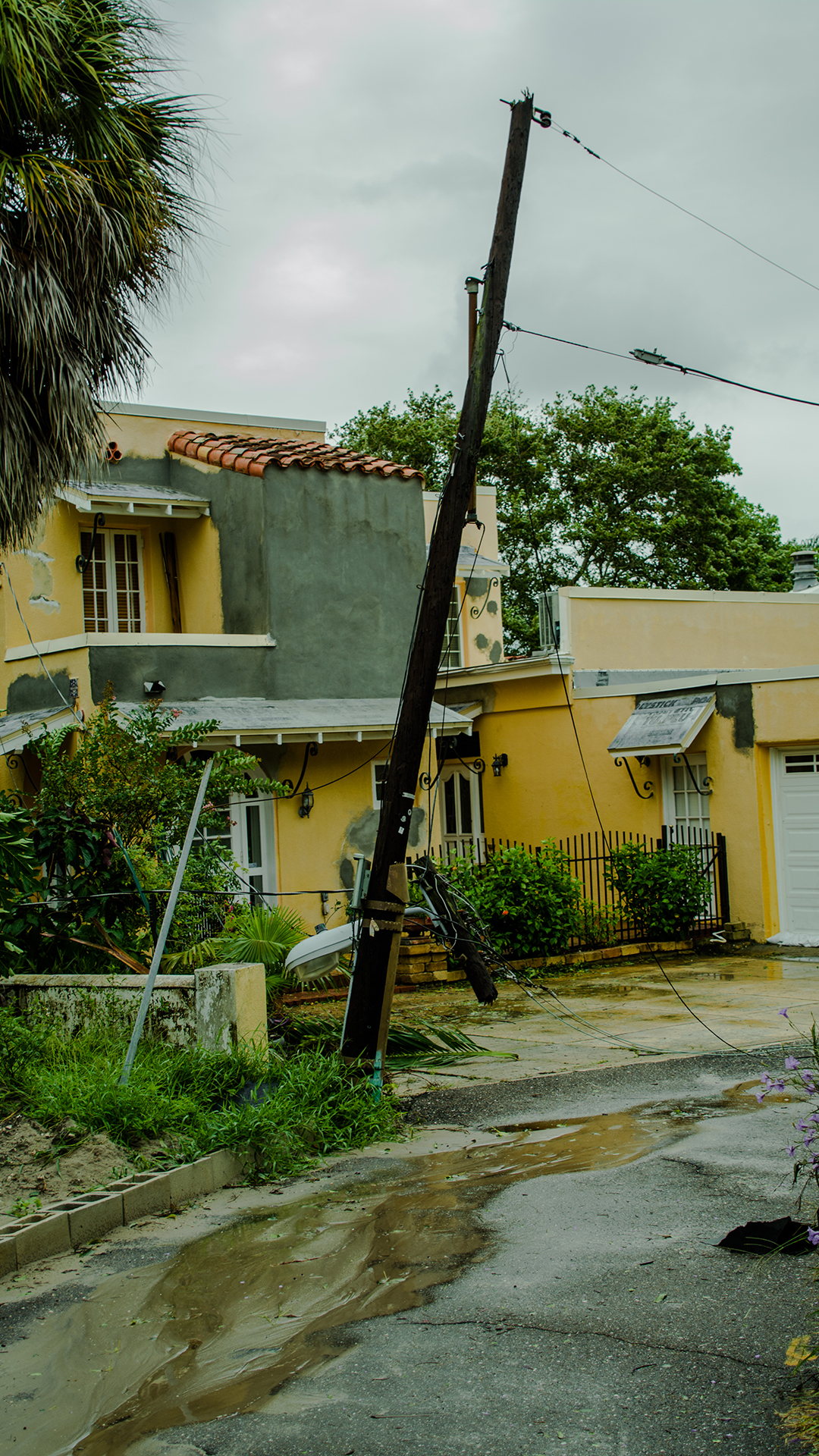 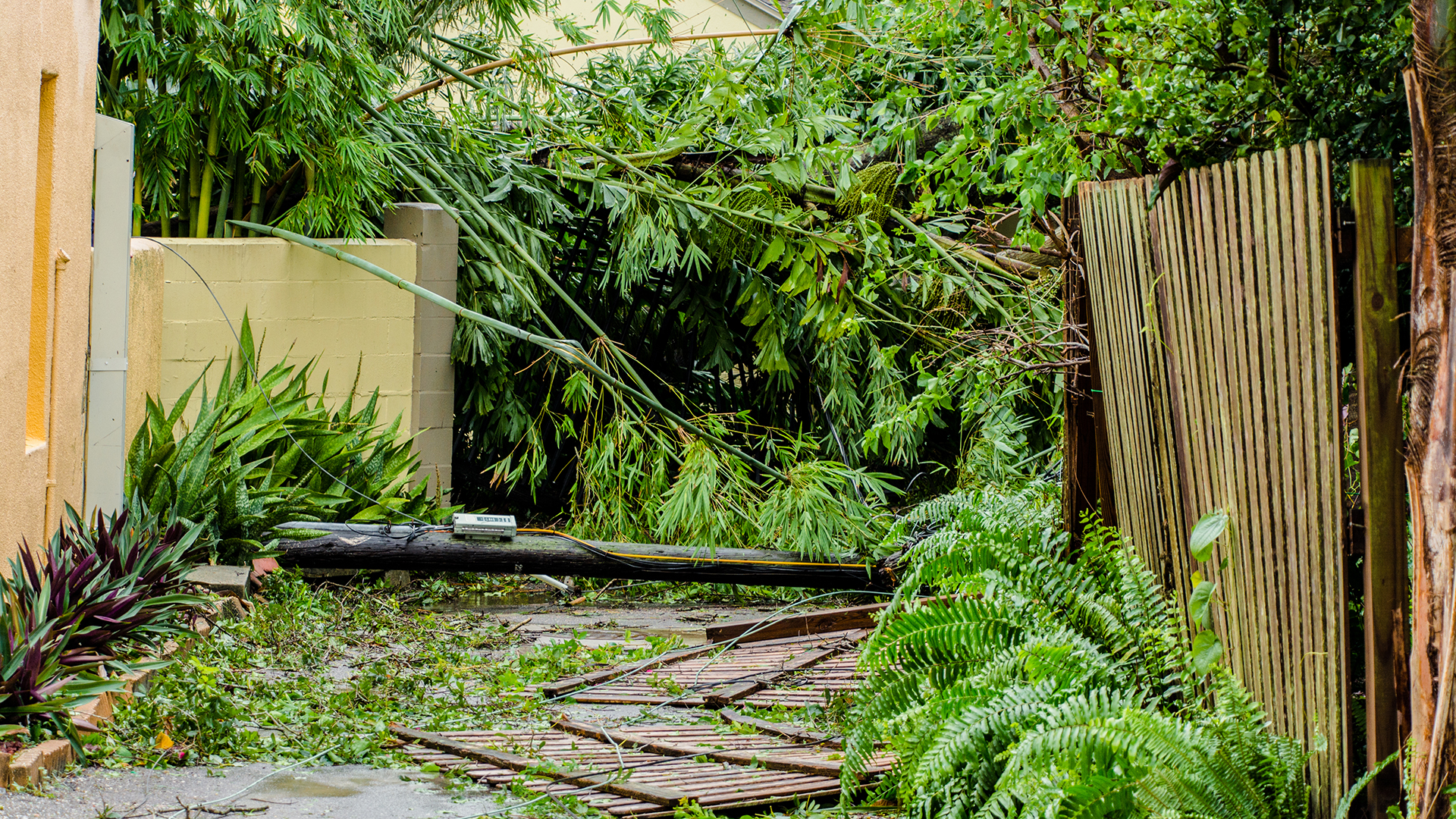 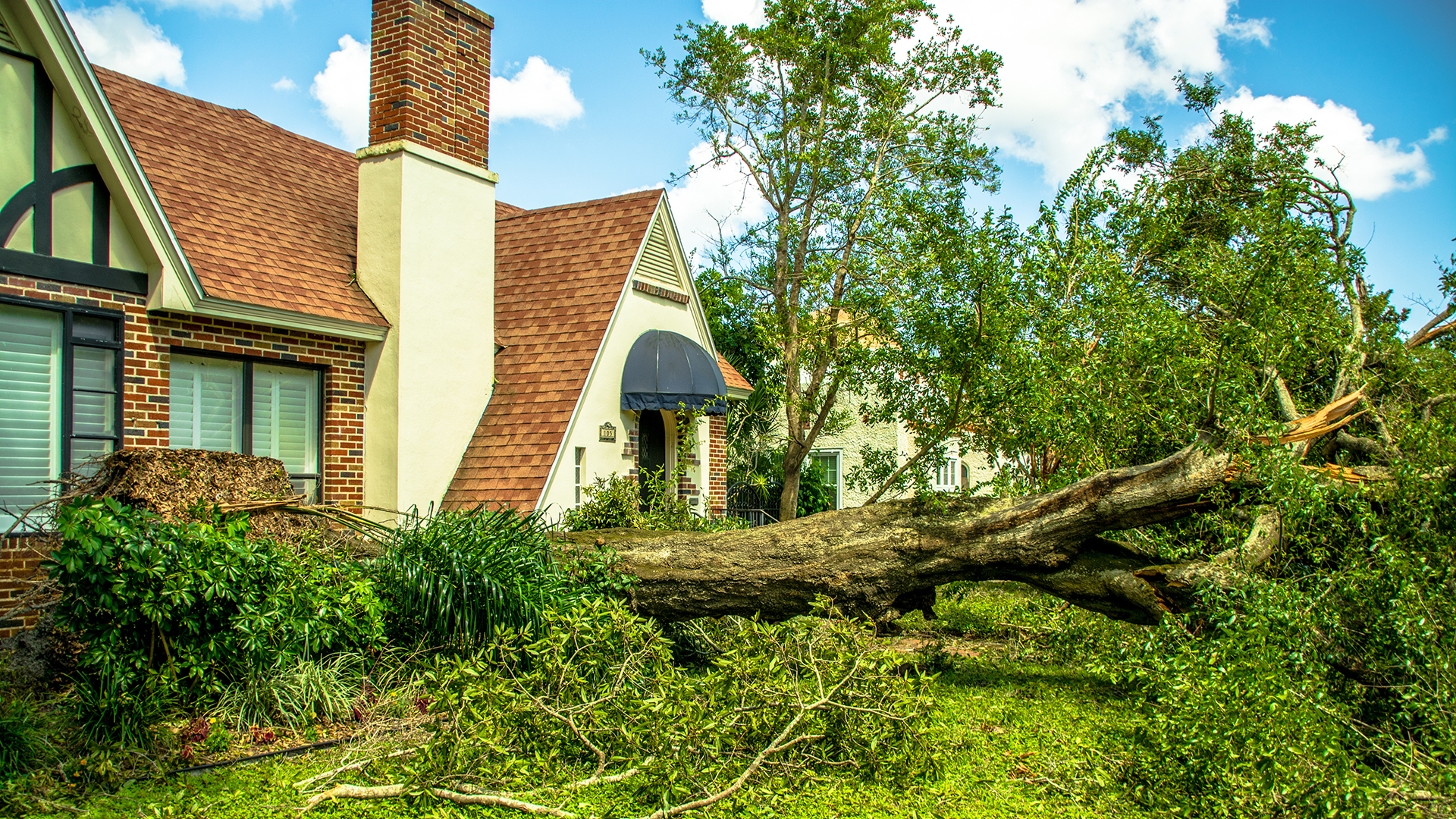 Everything changed on Tuesday. As the good people of Pinellas County ventured out into the world in their cars, it seemed that people plain forgot their manners. The civility of the frightened masses was gone. All the rules of the road must have blown away in the storm. I don't want to sound like the old man shaking his fist in the air as he yells at kids to get off his lawn, but the driving that a lot of people were doing was downright stupid and dangerous. Speed limit signs were completely ignored. Stops signs meant nothing. Aggressive driving and questionable judgment was happening all around.

The most problematic situation were intersections with traffic lights that were out. Those are to be treated as a four-way stop. It's understandable that some people might not remember this. To help, the police put stop signs on barricades in the middle of the road at as many intersections as they could. I personally witnessed a lot of cars blowing through intersections with a temporary stop sign. Many times, the same car would go through several of these in a row.

Speeding and aggressive driving had been a huge issue this week, too. Sitting outside on my front porch, I watched car after car going down my street at double the 30 miles per hour limit (that's 60 mph for you non-math folks). Some cars were going even faster. Eventually the inevitable happened and a nasty accident occurred just up the street. Someone was speeding through an intersection and t-boned another car. This was going on all over the city. With traffic lights out, and downed trees and all sorts of debris in the road, this was a time for cautious driving.

The problem was so widespread that any radio DJ I heard constantly addressed these issues. They were begging people to drive with an abundance of caution.

I don't know what the root cause of all of this was. There are more than enough idiots on the road during the course of a normal day. The number of incidents and idiots seemed to skyrocket even though there was only a fraction of the normal amount of cars on the road. In most cases, I'd like to think there was no intent to drive so dangerously. Were people so stressed out from the hurricane, that once they got behind the wheel, all that stress was transferred to how they drove? Did some people think that the cops were so tied up with other things that there was no way they would get a ticket?

I don't have the answers.

Driving around looking for a hot meal was more frightening than riding out the storm itself. As power was slowly restored around the city and evacuees returned, the problem solved itself. The increase of traffic put a stop to all the fancy driving. Before Irma, everyone was so respectful and understanding. After, it was like Death Race 2000. I've been through hurricanes before but never witnessed this amount of lawlessness on the roads after.

If anyone else has experienced a similar lack of driving decorum during a disaster or emergency, please share your thoughts in the comments below.