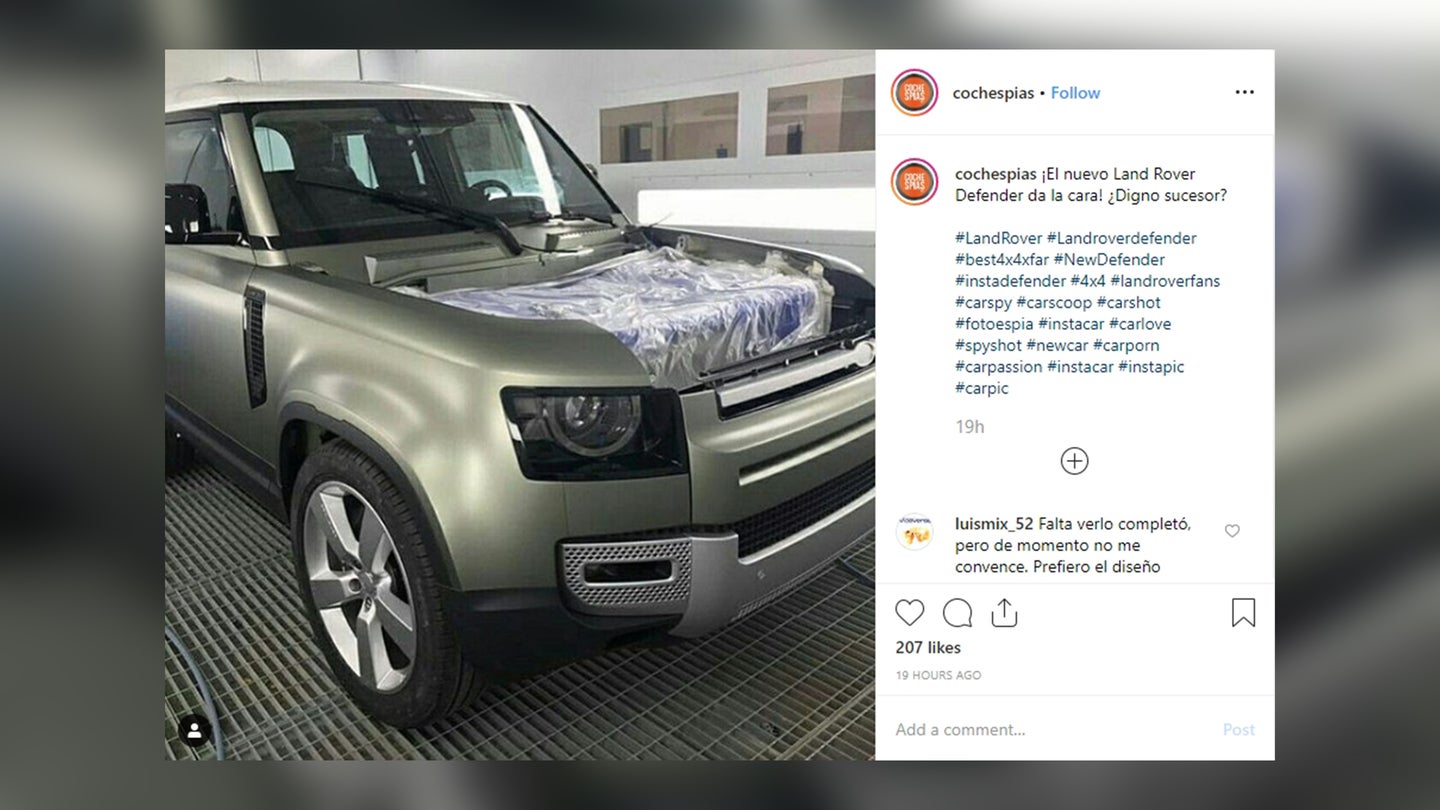 Slowly but surely, we’re approaching the reveal of the 2020 Land Rover Defender, one of the hottest and most anticipated new car launches of the decade. We’ve seen teasers, spy photos, and even a LEGO kit of the new model. But now, a photo surfaced on Instagram via CocheSpias, a Spanish car blog that literally translates to “car spies,” and it potentially gives us our best look at the next-generation Land Rover Defender yet.

The Instagram shot is captioned: “The new Land Rover Defender shows its face! Worthy successor,” meaning someone at the site was able to get a snap of the supposed car uncovered.

From what we see, the Land Rover still retains somewhat of a boxy look, though many of its fenders are rounded off and contoured for a more car-like appearance. Gone are the old models’ separate metal bumpers, which was expected. And obviously visible are its pronounced wheel wells, indicating that the wheels themselves are placed at the furthest corners of the Defender for the utmost in approach and departure angles, as well as ground clearance. For a vehicle meant to go where no paved roads exist, this is absolutely crucial.

Although the hood is missing, there seems to be an odd box in the place of what would normally be an internal combustion engine. However, the item in the engine bay, which is wrapped in plastic, doesn’t resemble anything like a good ‘ol gas or diesel engine.

A year ago, Australian car outlet Motoring.com reported that Land Rover will launch an all-electric version of its new Defender when it hits production, so there’s a chance this example in the spy photo could be one of those cars.

But the photo leak didn’t come without some heat. Its presence on the web ruffled some feathers at Land Rover corporate, who carefully crafted a statement that casts a shadow of doubt that what we see in the picture isn’t wholly representative of the final product.

"Land Rover is aware of an unofficial image in circulation. Through the development of any new vehicle many design options are considered,” a Land Rover spokesperson reportedly told Road and Track. “We will not comment any further at this time. Land Rover does not comment on future product plans."

Then again, that could be the automaker just providing us with typical PR jargon to leave the photo up for interpretation. But if it does happen to be a fake, it’s pretty darn good one.

The Land Rover Defender was last sold in the U.S. in 1997 and Land Rover repeatedly confirmed in the past that the new one will make it to our shores. We’re told to expect an aluminum unibody structure based off other Land Rover models as well as off-road biased technology currently found on the likes of the Discovery models and full-size Range Rover.

The new 2020 Land Rover Defender is scheduled to debut sometime later this year.