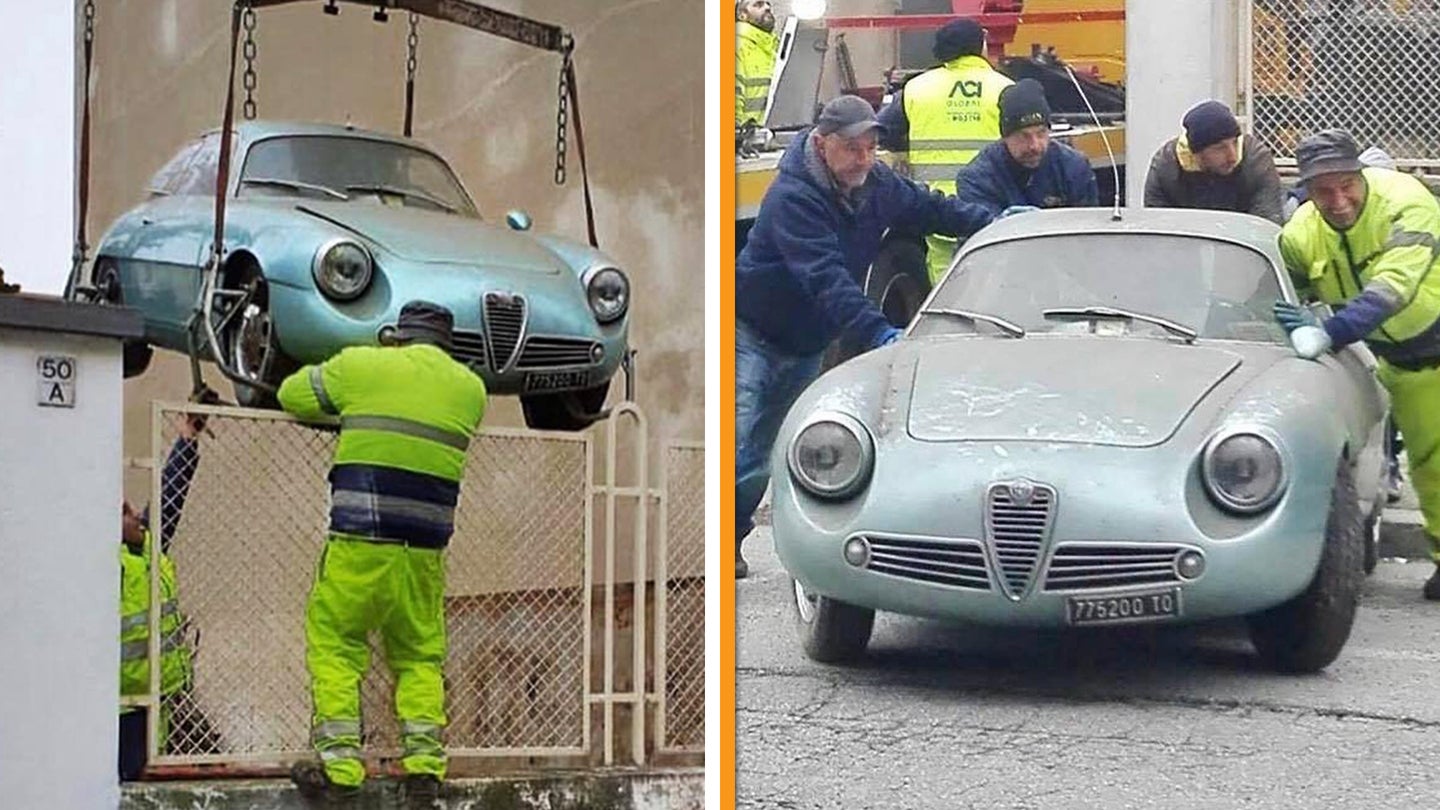 Two hundred and seventeen. That's how many copies of the Alfa Romeo Giulietta Sprint Zagato, a gorgeous, aluminum-bodied road racer, were built between 1960 and 1962. Fewer still survive to this day. But one example was given a second lease on life after getting rescued from a basement in Italy where it had been stuck for 35 years, and it just sold at auction for over $640,000.

Photos posted to an Alfa Romeo fan Facebook page document how the old car was brought to light. A team of workers used a giant crane to carefully extract the 1962 Alfa Romeo Giulietta SZ from its subterranean tomb, where it had reportedly been trapped by a broken car lift for over three decades. Not quite a barn find, but close enough.

The post's author describes the owner as an elderly mechanic who passed away last year without a will or any locatable family, leaving the rare Alfa to be sold at a public auction. That eye-popping figure is actually pretty on-target for the collector's market; in 2015, a rough survivor sold at Gooding & Company's Scottsdale auction for $577,000. This one actually looks to be in better condition despite the thick layer of dust and number of parts the buyer will have to replace.

As the full name suggests, the Giulietta SZ was born from a fruitful partnership between Alfa Romeo and Zagato. The Italian coachbuilder made a splash in the late 1950s by taking a handful of Giulietta Sprint Veloces and recasting them with a sleek, aluminum body designed for racing. The success of those cars on track inspired Alfa Romeo to commission a production version, which debuted in 1960. Those were certainly the days.

The Alfa Romeo Giulietta SZ had a shortened chassis, empty interior, plexiglass windows, and a 115-horsepower version of the company's 1.3-liter twin-carb four-cylinder in addition to that custom aluminum bodywork. Not setting the spec sheet on fire, we know, but keep in mind the car had a wheelbase of less than seven feet and weighed under 1,700 pounds.

Though it was built to be street-legal, the production car was also successful on the racetrack, even being used by privateers in the 24 Hours of Le Mans. We can only hope that after 35 years in the darkness, this one finally sees some vintage wheel-to-wheel action. It's been far too long.