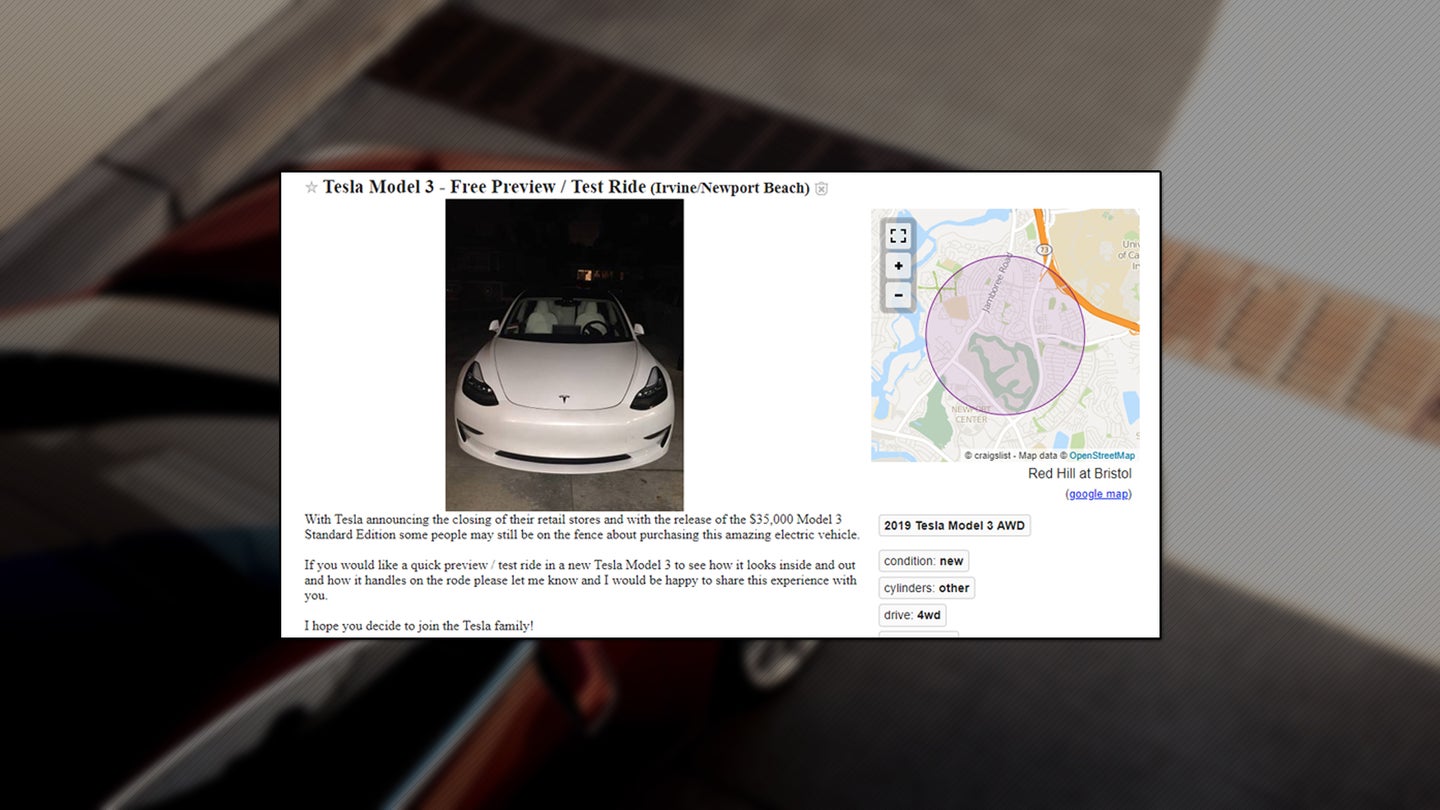 With Tesla's recent announcement that it will close most of its retail stores, customers looking for a test drive in a new Tesla vehicle are finding themselves in a difficult position: buy the car sight unseen, or don't. To make the decision a bit easier, groups of loyal Tesla owners are volunteering their time and cars to offer potential owners a test drive before joining the "Tesla family."

One particular person on Craigslist (archive available here), for example, is offering up free rides to anybody looking to purchase a Model 3. He states that he would like to offer quick preview rides to help potential owners see the car inside and out, linking his Tesla referral code at the bottom—a program which is now defunct and no longer offered due to the high costs involved.

Other owners have posted to Tesla's official forums asking how they could help organize grassroots efforts to promote online-only vehicle sales. Some even Tweeted directly at CEO Elon Musk, asking him to implement a new rewards program where owners could offer up trips in exchange for points. Kind of like the previously touted Tesla Network, but with extra steps.

This isn't the first time that Tesla owners have come together to offer their help to the mothership. At the end of Tesla's third fiscal quarter in 2018, the community flocked to help assist with deliveries, helping to make Q3 Tesla's very first profitable quarter.

But while Tesla still allows for test drives to be scheduled on its web site, it appears to be canceling them in favor of having owners purchase the vehicle and return it if it fails to meet their expectations. Such is an example with the LA Time's very own Russ Mitchell:

According to Tesla, 82 percent of Model 3 owners purchased their vehicles without ever test driving them first. 78 percent of all total orders were placed completely online, helping to justify Tesla's decision to begin closing the doors on its retail forces.

Tesla currently offers drivers the ability to return their cars within seven days so as long as they ordered it without test driving and have driven under 1,000 miles. It's not clear what Tesla's strategy will be to sell the cars after taking the return.

Still, it's odd (yet refreshing) that a community is willing to offer brand promotion with nothing tangible to gain in return.