A piece of cinematic history was hiding in plain sight Down Under. 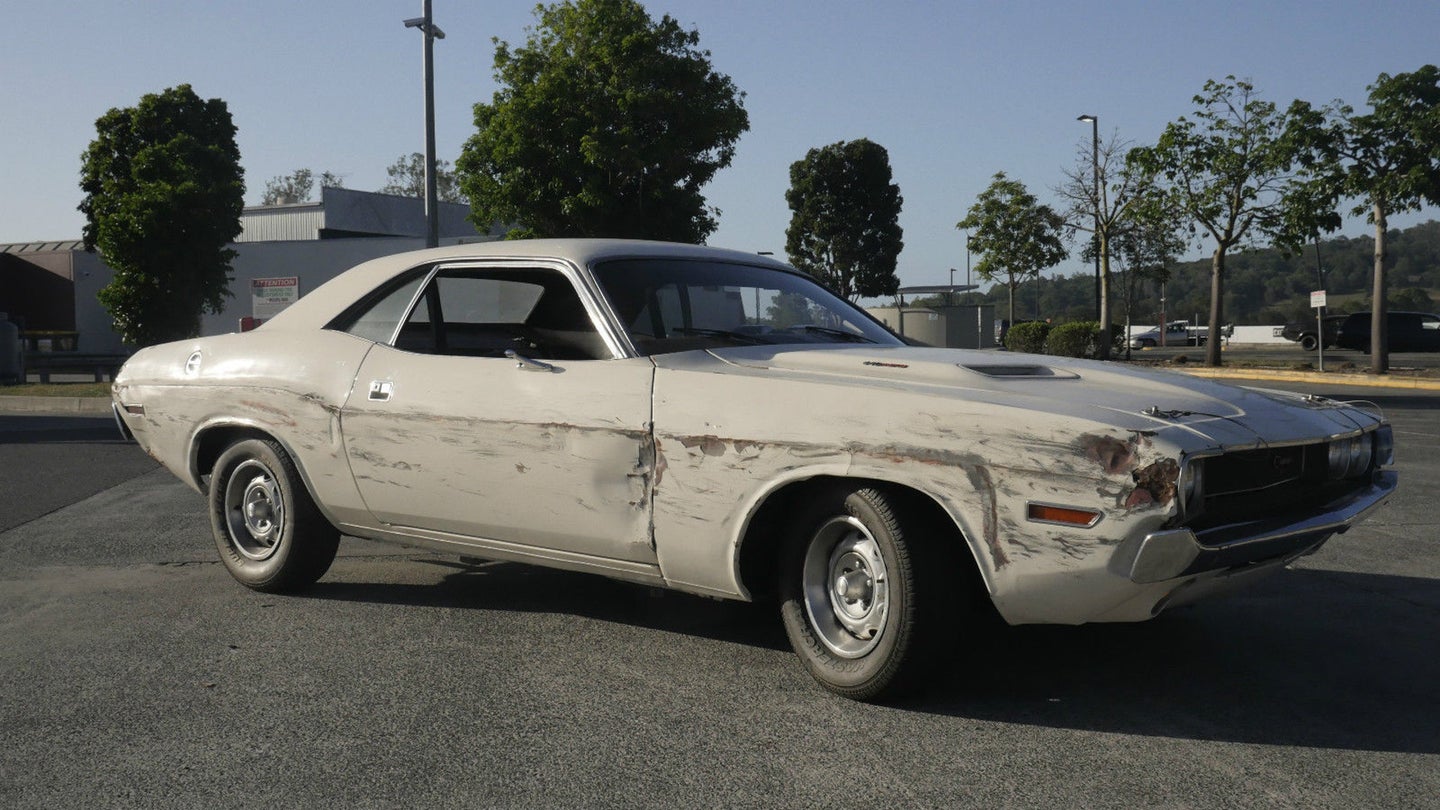 Even if Quentin Tarantino himself called it "the worst movie I ever made," we'll always love the 2007 cult classic Death Proof for both its homage to the muscle car films of the Seventies and Tarantino's dedication to bringing some cinematic realism back to the slapdash world of Hollywood car chases. And now you can own a drivable piece of the movie yourself: The 1971 Dodge Challenger R/T used by the three heroines in their duel to the death with Kurt Russell's murderous Stuntman Mike.

And when we say "used," we mean it. The Challenger's body sports all manner of dings, dents, and scratches from being featured in the chase scenes, as well as several film-friendly modifications like chopped front seats, chassis-mounted camera brackets, and some extra "painted-on" cosmetic damage. Additionally, window frames were added to the tops of the doors to help real-life stuntwoman Zoe Bell strap in for the famous "Ship's Mast" hood-riding scene.

Of course, Grindhouse aficionados will point out that the car featured in the film was purportedly a 1970 Dodge Challenger R/T 440 Magnum (like the one in Vanishing Point), but some movie magic by Tarantino's production crew made this 1971 stand-in look like the real deal.

Under the hood, the car's original 6.3-liter, 383 Magnum V8 engine still pulls strong and has benefited from a host of new and refreshed parts, and the eBay listing says the transmission shifts smoothly. The electrical system has been completely worked over, and a new fuel tank and exhaust system should keep you from smelling too much like gasoline.

And befitting of a Hollywood car, its recent reemergence comes with a hell of a story. The Challenger is being sold by Movie Cars Central, a European-based private collection of famous film vehicles whose team discovered the car sitting in a garage in Australia when they traveled Down Under to work on a totally-unrelated Mad Max Interceptor restoration.

In a YouTube video accompanying the ad, the previous owner describes the series of events that led to him accidentally buying a piece of movie history. Back in early 2007, after filming for Death Proof was completed but before the movie's release, a friend imported the Dodge Challenger in question sight unseen and was disappointed in its battered condition when the car arrived in Australia. The previous owner then bought it off his friend, thinking it would make an excellent restoration project.

It wasn't until another friend saw the car in a trailer for the movie a few months later that the man realized what he had. At that point, he decided to leave the car as-is and wait for someone to buy it who would appreciate its cinematic heritage and not make the same mistake he almost did. Movie Cars Central quickly snatched up the Challenger, and now's your chance to do the same. But act quickly—bidding is currently north of $13,000 with five days still to go.

Everything you need to become your own private investigator.

That’s almost triple its base MSRP.