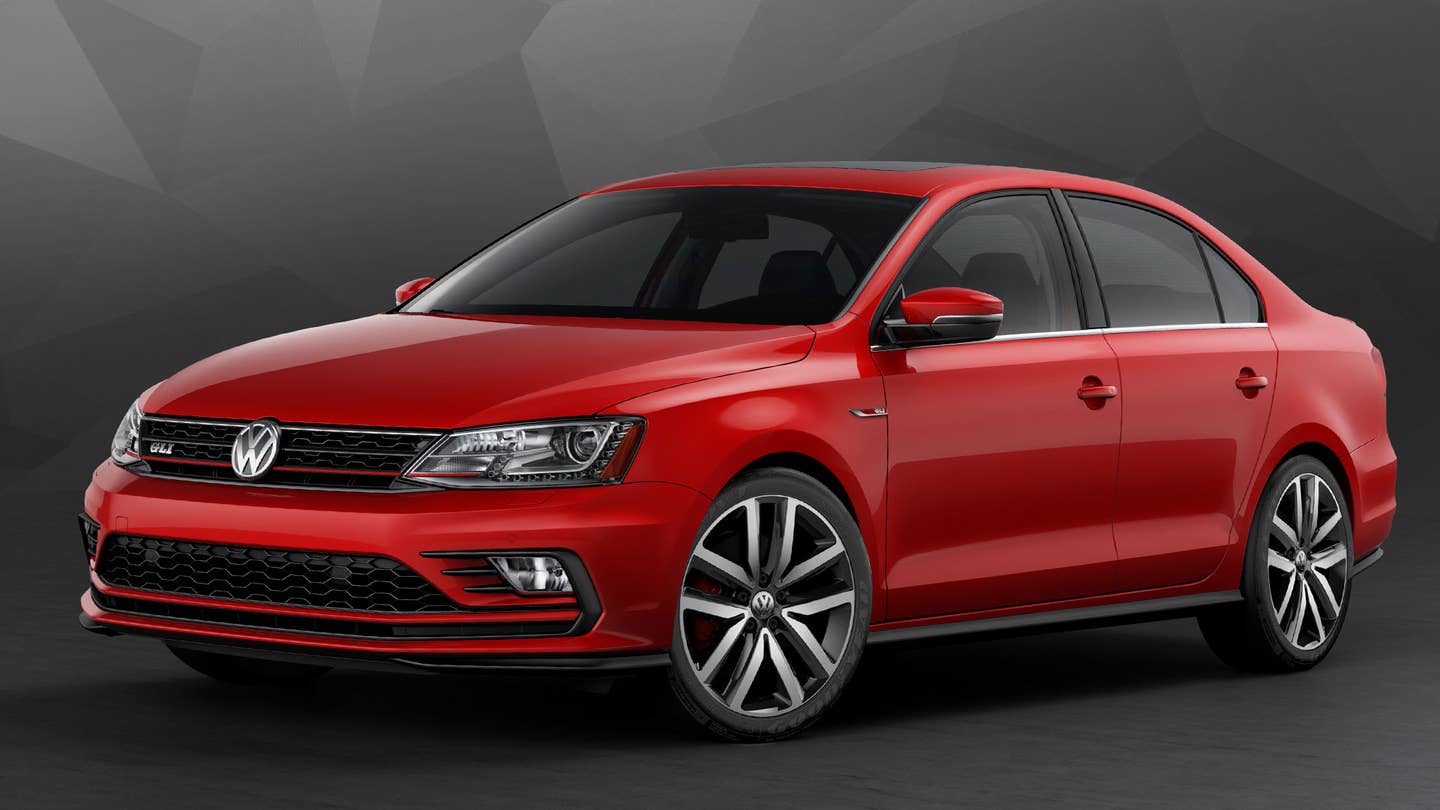 Prolechariot is a series about vehicular value. It's about slapping your needs and wants on a wall, grabbing a fistful of darts, cocking your arm back and trying to strike as many of your targets as possible. In other words, it’s about making the second-largest purchase decision most Americans face, and making it right. Prolechariots are cars for the rest of us, and Jonathan Schultz is driving them. Up this week: the 2016 Volkswagen Jetta GLI.

Check your wallet, America. Is there $33,652 in there? Hey, congrats! That’ll buy markedly better versions of some very lame things. Among them: 9,776 medium Almond Joy iced coffees at Dunkin’ Donuts, 1,053 Criterion Collection DVD copies of My Dinner With André, or a new car at the nationwide average price. It’s more than sufficient to net a 2016 Volkswagen Jetta GLI, a sedan that could never redeem the cornea-stabbing dullness of its source material, but one that might just make a driver forget the source material entirely.

What’s so great about three letters that, when read as one word, form “glee?” For an answer, cast your gaze toward that other Volkswagen with three letters to its name.

The GTI lends its steering wheel, 18-inch alloys, six-speed dual-clutch automatic transmission, two-liter turbocharged engine, beautifully bolstered seats, and hot-hatch pluck to the Jetta GLI. It’s as if the Jetta locked itself in the basement with a Bowflex and a Vitamix, taped a photo of the GTI to a mirror, Rocky-Drago style, and put in work.

Not unlike the MkVII GTI that inspires it, the Jetta’s washboard abs and jackhammer quads remain largely hidden. It’s a stealthy machine, one that gives no outward indication beyond the obvious signifiers—big wheels, trunk-lid lip, chrome-tipped exhaust pipes, Tornado Red paint job—that it carries 12 kettle bells in its trunk at all times.

Ah, yes, the badonkadonk out back. Is it fair to call this sedan a GTI with a trunk? Would that consequently make the Jetta GLI the most Prolechariot Prolechariot on the market?

Here are the five things you need to know about the 2016 Volkswagen Jetta GLI.

Of the Passat, the Jetta’s mid-size sibling, The Drive chief auto critic Lawrence Ulrich once wrote:

The VW resembles an 8-year-old’s Crayola rendering of a car: three boxes, the tallest one in the middle. The look is almost patronizing, leading one to wonder what VW executives really think of American tastes.

If the Passat was drawn with Crayola, then the Jetta was rendered in finger paint. It takes a designer of curious talent—or just a patronizing view of one’s target consumer—to create such a reductive vehicle shape.

Walter de Silva, the now-retired VP of design at Volkswagen Group who's credited with the first-gen Audi R8 and A5, signed off on this strain of rolling misanthropy. The nominal volk in his employer’s name must have been abstractions to his teams; currywurst-chomping everymen with no aesthetic depth. Here is your car! de Silva and company must’ve proclaimed from Wolfsburg. It looks like a car! Are you very pleased?

Well, no. How about a little lower bumper sculpturing, or a subtle beltline up-kick à la Hyundai Elantra? Why not a tapering crease or bulge in the body side? Something, guys. Anything.

At least in GLI guise, the Jetta gets tarted up in the wheels, paint, and deck-lid lip departments.

2. Inside, All Is Forgiven

There are clear benefits to designing a car to be a car, and not a chunky peripheral device for your phone. The Jetta GLI’s interior showcases Volkswagen at its best: ergonomically smart, intuitively designed, and solid as fuck-all.

Buttons, switches, and dials glow an Audi red. Crisp analog gauges for fuel level and engine oil temperature nest inside the speedo and tach, a declaration that such things should not sprout virtual green leaves or be buried behind three sub-menus; they’re part of driving, and merit your attention.

V-Tex leatherette feels more genuine than the real stuff in the Ford Focus Titanium. It’s every bit as good as Daimler’s MBTex: the Connolly hide of faux leather. Its one shortfall? Breathability. On a 95-degree day spent running errands in Brooklyn and Queens, no amount of wondrous A/C could prevent a Prolecharian’s back from sweating, and VW isn’t exactly pulling a Kia and equipping sub-$30,000 cars with seat ventilation.

3. It’s How to Multimedia

Audi-like thinking also suffuses the Jetta GLI’s multimedia features. We may never sample the onscreen hotness in the Ferrari GTC4Lusso, BMW 7-Series or Jaguar XF (because, you know, Prolechariot) but for $28,840, delivered, you’ll abide the 6.33-inch unit in the Jetta GLI, which can be found all the way up the VW range.

Take the stereo's on-screen balance and fader controls. Your finger operates a crosshair superimposed on a diagram of the cabin; so far, so un-revolutionary. But just the slightest brush of a fingertip slides the crosshair around the virtual cabin, instantaneously changing the 400-watt Fender system’s output levels. It’s the kind of gee-whiz feature that Honda would devise, but didn't, and its sheer smoothness of operation befits a Bentley.

Prolechariot took delivery of the Jetta GLI in lower Manhattan, having washed hands of the Nissan Rogue SV a few hours earlier. FDR Drive, the six-lane highway running north-south along the island’s east side, was uncharacteristically deserted. Time for a rare, deep throttle dip.

Fellow Prolecharians: You don’t know the tonic qualities of a 210-horsepower, turbocharged, dual-clutched compact sedan until you’ve driven a Nissan Rogue SV for a week. As the engine’s relaxed gurgle tightens into a military drumroll, something like Fahrvergnügen creeps up your esophagus and leaves, unbidden, as this: Wow! Nothing like the thrill of exploded expectations.

The surprises continue as the GLI hunts and pecks its way across the Brooklyn Bridge, and on to the Gowanus Expressway—the de facto Terrordome of New York roadways. As lane markers abruptly disappear and drivers swap lanes for the sheer schadenfreude of fucking up a guy’s program, the Jetta GLI stays firm. Quick steering inputs, firm brake pressure and sharp, addicting squirts of power become your weapons in this Gotham Edition Galaga, and the Jetta GLI stays on message: more fun, more refinement and less money than you’d ever expect.

Steering wheel–mounted paddles actuate the DSG more quickly than cars costing three times as much. VW has been doing this two-liter/six-speed DSG thing for nigh on a decade, and you can feel it. Granted, the paddles should be left alone until the gear selector is slapped over to manual mode, otherwise the DSG will override the shift selection and kick you up if you’re in normal Drive mode, or down a gear (or two) if you’re in Sport. That Volkswagen even affords you such choices, though, is rare—and appreciable—in this segment.

There are, of course, dynamic tradeoffs between the Volkswagen Jetta GLI and GTI.

For its GLI tune, the two-liter gives up 50 pound-feet of torque to the GTI. Further, the Jetta offers nothing like the GTI’s Performance Pack, with its even higher engine output, bigger brakes, and limited-slip differential. And where the seventh-generation GTI is built on VW’s modular architecture, with its high-strength steels and increased torsional rigidity, the Jetta slums on a previous-gen platform. Those deficiencies alone preclude Prolechariot from making an apples-to-apples comparison.

The Jetta’s proposition doesn’t strengthen on pure price, either. At $28,840, the tested GLI SE undercuts a comparably equipped GTI SE by about $1,700, but the latter receives leather and a panoramic sunroof—straightaway justifying the price differential.

A capacious trunk, though, will be more valuable to some Prolecharians than a trick diff and a bucket-load of additional torque. The takeaway: GTI if you're traveling light, GLI if you don't need the might.