The Hyundai Elantra Is An Eager Puppy

It's diligent and it's priced to move, but will it move you? 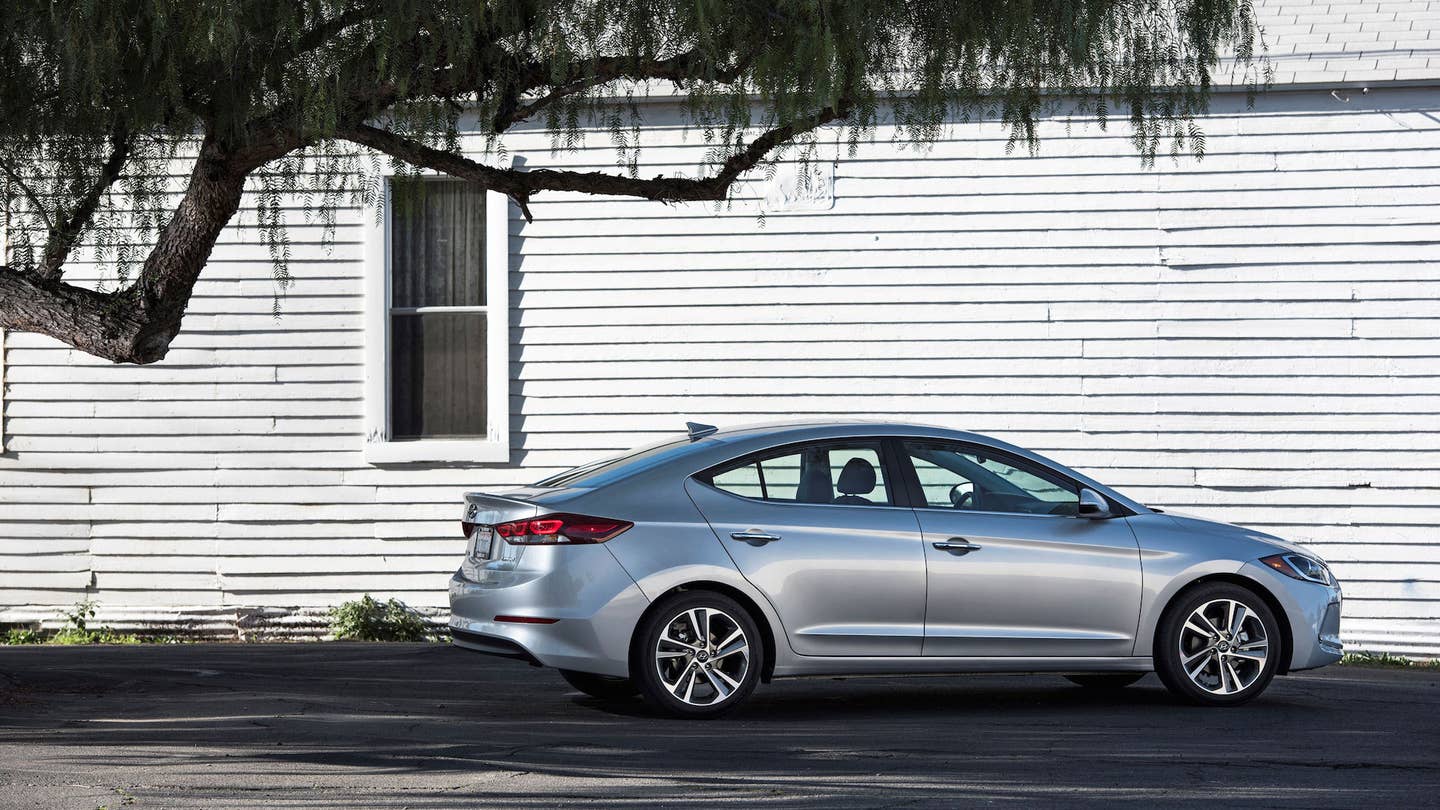 Check your wallet, America. Is there $33,845 in there? Hey, congrats! That’ll net 17 Snoozer Dream Weaver goose-down body pillows, nine Boyd Sensair mattresses, 736 12-pound boxes of Jet-Puffed marshmallows, or a new car at the nationwide average price. That sum also lands you deep in a plush-riding Hyundai Elantra Limited, overhauled for the 2017 model year and packing more premium features than a BMW 528i. It’s strange days when Prolechariots can lord it over cars costing twice as much.

But “more” does not mean “Munich,” and there’s the rub. Let’s use leather sourcing as our teachable moment. Prolechariot dinged the Ford Focus Titanium last month for its cut-rate leather seats, but the hides in the Elantra Limited are affronts to cows. They besmirch Bessie’s blessed memory. They turn back the clock on animal husbandry to a time when bovines bumped uglies with armadillos. They’re hot, cravenly conceived garbage.

And yet the 2017 Hyundai Elantra Limited, at $27,710 as tested, succeeds on so many other metrics—metrics that frankly are more important to Prolecharians than the quality of their vinyl, er, leather upholstery—that forgiveness creeps in. The ‘17 Elantra is in tremendous fighting shape, a good thing considering it occupies one of the most bitterly contested corners of car-dom.

To succeed in the mainstream compact sedan segment, a carmaker must offer everything found in mainstream midsize sedans, but in a smaller package and at a lower price. Sacrifices and compromises are endemic; the question facing a Prolecharian is, Which compromises can I abide? More prosaically, Of the things that suck, which won’t make me saw at my wrists with Cheez-Its?

Thankfully, the Elantra Limited keeps your hands out of the pantry. It is a mini Q-ship of automotive value, from a brand that does value better than just about anyone else.

But does value alone make it worthy of a Prolecharian’s hard-earned dollar? Here are the five essential things to know about the 2017 Hyundai Elantra Limited.

With the upmarket Genesis and Equus spun off under the Genesis sub-brand, Hyundai is now a four-sedan concern: Accent, Elantra, Sonata, and Azera (at least until the Ioniq triad joins later this year). That's a lot of saloons—as many as any contemporary carmaker in the U.S. Not only by dint of its all-newness, though, is the Elantra the prettiest of the bunch.

Ten years ago, who would’ve believed that a compact Hyundai sedan would be among the belles of its segment? Even the previous-generation Elantra sedan, heralded as a mini-me of the exuberantly styled Sonata, looks pinched and fussy by comparison. Exhibit A:

Notice how elongated the car’s hood now appears. The two character lines along the flanks are more sharply drawn and less upswept, further stretching the visual footprint. And the 17-inch, Veloster-lite alloys add a welcome dollop of aggro.

This is all preamble to the nose. C-shaped foglamp cutouts in the fascia are so, so pretty, offsetting the broad, Audi A3-indebted maw. The jewelry is not there just for sparkle's sake, and we dig it all.

2. It Buttons All the Buttons

In his recent review of the 2017 GT-R, Lawrence Ulrich praised Nissan for whittling the number of switches in Godzilla’s cabin from 27 down to 11. By Prolechariot’s fail-proof hunt-and-peck tally, the 2017 Elantra Limited has 20 buttons on the IP, eight buttons and four toggles on its wheel, and a smattering of buttons on the shift-lever tunnel. That’s not even counting the hazard lights, window controls, or traction-control buttons to the left of the steering column. When a 565-horsepower Xbox like the GT-R has gotten religion, you know you’re behind the curve.

It’s all the more perplexing given how slavishly Hyundai and sister brand Kia follow European fashions. In both Britain and the mainland, automotive interior design is trending toward redundant controls, multifunction displays and fewer buttons. Worse yet, the Elantra’s ergonomics are such that some of the rightmost buttons are practically inaccessible to drivers who don’t spec the go-go-gadget arm-extender package.

There’s a charming, throwback mission-command quality to it all, though—think circa-1994 Lexus LS, back when lots of buttons equated to lots of rich. Too bad, then, that material choices don’t complete the illusion. Hard plastics proliferate on door panels, door locks, door handles—basically anywhere you’d touch them. In last week’s Prolechariot subject, the Mazda3 Grand Touring, the hide stitched around the e-brake handle was as buttery as a pair of Canali loafers. The plastic on the Elantra Limited’s handle may be the one material more lamentable than the car’s leather upholstery.

And oh-so-still, too. The Elantra Limited’s levels of noise, vibration and harshness would shame some anointed Prolechariots, including the aforementioned Mazda3 and the Honda Civic Coupe. Hyundai made spectacular offseason investments in sound-deadening material and aero.

Smacked by a wicked cross breeze along Jamaica Bay—the wind-buffeted preserve between JFK airport and, uh, the rest of New York City—the Elantra Limited held fast to the pocked, elevated roadway, allowing occupants to continue bemoaning the apocalyptic state of New York’s road infrastructure in crisp, conversational tones. Wind and road noise have been almost completely dialed out. On that breezy bit of Belt Parkway, the gusts just dripped off the A-pillar like water off a cormorant. When such calm is exuded by a carmaker’s second-most affordable sedan—one that might call a Toyota Corolla its white whale—then you stand up and cheer economies of scale.

Economies of scale may allow formerly upmarket features to be bundled in your $27,710 Elantra Limited, but don’t go expecting paragons of their type.

That eight-way adjustable power driver’s seat? It’s a great feature, presuming it can create a fundamentally good driving position. If its pan doesn’t accommodate drivers who prefer to sit relatively low, the steering column must be raised. Ditto the outer mirrors. And so on, until the perch feels like it’s cross-bred with a lifeguard tower.

Lane-keeping assist, part of the $1,900 Ultimate package, is nothing more than an incessant beep that didn’t activate until we’d put at least one tire into the adjoining lane. No haptic vibration through the steering wheel, no corrective action from the tires themselves…it’s a semi-autonomous driving feature the way a Pop-Tart is breakfast.

Excellent adaptive cruise control, however, is your redemption prize. With a traffic jam looming on Manhattan’s East River Drive, the system brought the Elantra Limited from 50 mph down to a stop, with no hysterics whatsoever—just smooth, progressive brake application.

5. It’s Matter-of-Fact About Its Labor, and That’s OK

There’s nothing particularly scrappy, pugnacious, or any other canine attribute at work here. The Elantra Limited gets the job done, whether it’s building merge speed, hanging with the fast boys in the left lane, holding steady at an unruffled 75 mph, or swallowing suitcases. There may be just one dynamic trait that demands the driver’s careful modulation, and that’s the brake. Twitchy up high, a little numb down low, it requires some adaptation.

The Elantra Limited doesn’t deal in half measures; it deals in 80-percent shares. Everything is close to where you’d hope for it to be in such a cutthroat segment. Boffo value notwithstanding, however, no single attribute stands tall.

And so we end where we began. The Elantra Limited is a strong, spectacularly equipped entry in the Prolechariot canon. It’s just not one that, given our druthers, we’d regularly pull off the shelf.