The Mazda3 Grand Touring is the Working Man’s Hero

The legendary Japanese hatchback comes in for the Prolechariot up-down. 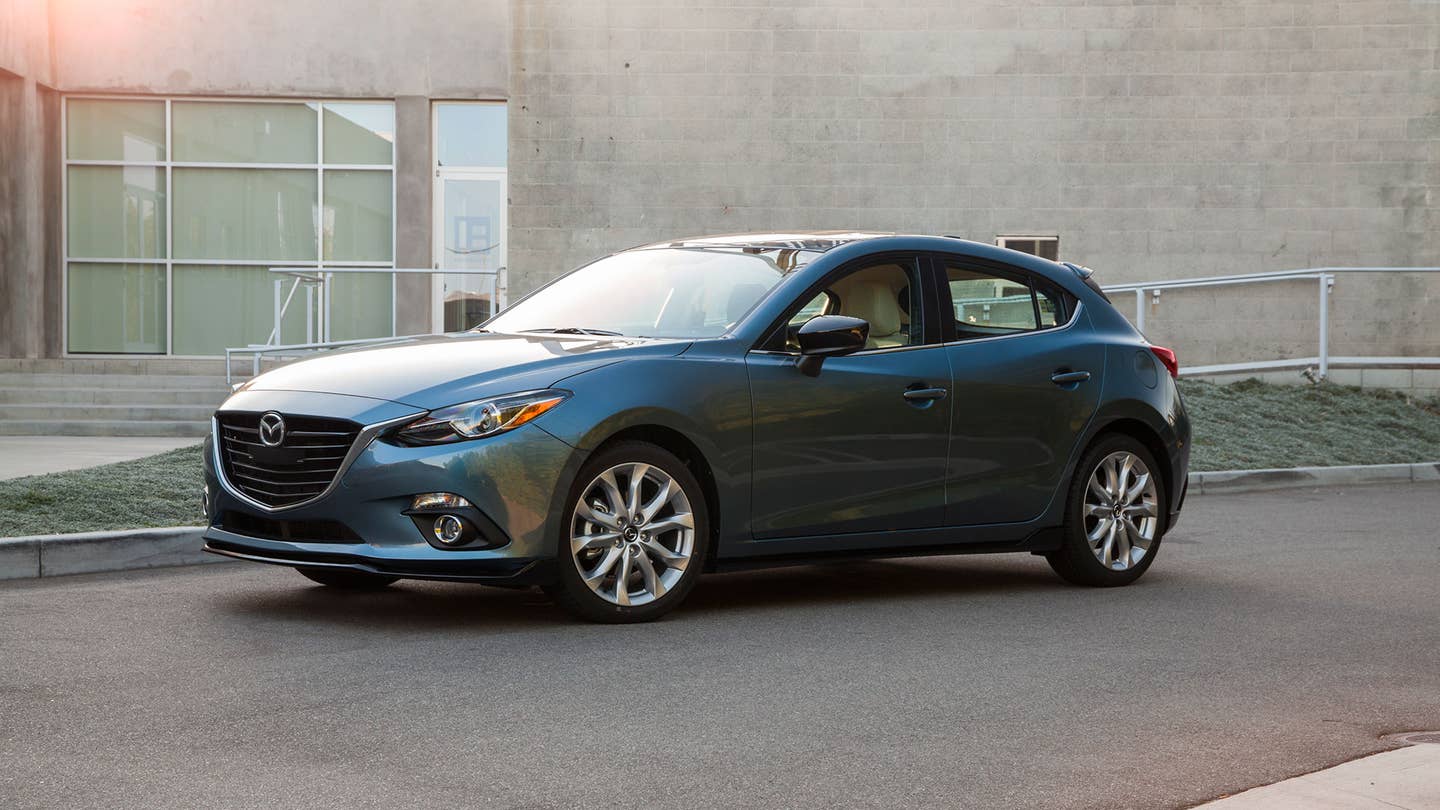 Check your wallet, America. Is there $33,845 in there? Hey, congrats! That will net you one bottle of 1953 Chateau Mouton Rothschild Bordeaux, two Intercomp in-ground axle scales, 2,116 ten-inch levels from Home Depot, or a new car at the nationwide average price. It’s also sufficient to drive home a loaded 2016 Mazda3 s Grand Touring—a car that is the very soul of balance. It’s the Zen monk of hatchbacks; the hippie chick belly-dancing on a slackline; the proverbial thread in the needle.

Automotive media prizes equilibrium, a maddeningly vague term better suited to chemistry sets and Segways, but the Mazda3 has long been the exemplar thereof. It’s also a staunch upholder of the Prolecharian way—an emblem of driving involvement, build quality, thoughtful design, efficiency, and affordability. A redesign in 2013 brought more of everything, and Mazda housed it all under a shiny new marketing buzzword: Skyactiv.

Like “Fairlady” or “Skyline,” the term was silly, but the philosophy behind it anything but. By compressing the air-fuel mixture in the engine cylinders to a remarkable degree, Mazda could squeeze more energy from a set amount of fuel. It was the internal-combustion equivalent of eating coal and shitting diamonds. The development of relatively lightweight transmissions and chassis—all done in-house, with no help from Mazda’s ex-sugar daddy, Ford—were other Skyactiv hallmarks.

They all conspired to create a compact car that simply did everything better than any competitor, even those costing tens of thousands of dollars more. If Prolechariot was conceived with one car in mind, it might’ve been the 3.

But, like a once-lights-out pitcher who suddenly finds his slider getting thwacked out of the yard, the Mazda has shown it is indeed mortal. Clever new opponents are streaming out of the dugout with cool features and attributes—the Honda Civic’s ingenious side-view camera; the Nissan Sentra’s adaptive cruise control—that the 3 can’t match. Perhaps even more worrisome, the 3 faces a grave existential threat from within. Is its dojo-bred mojo prepared to withstand a Crazy 88-like frontal assault?

Here are the five essential things to know about the 2016 Mazda3 s Grand Touring.

1. There Be Genius at Work Here

Prolechariot dares you to find a car for $30,270 as tested that’s more cohesive, more bonded to a nucleus of self, than the Mazda3 Grand Touring. The chassis, steering rack, bumper, sunroof, e-brake lever, radiator, horn—each one is a key to unlocking the Tao of 3.

But really, there are dozens of entry points to 3 worship. It could be the driving position, which presents a horizon unsullied by chubby A-pillars or intrusive rooflines. Slim wheel cradled loosely in your hands, suspension sopping up New York’s over-expanded expansion joints, gorgeously weighted pedals underfoot, aromatic leather under-butt, the sense of serene command is total.

It also could be the cabin. When luxury carmakers develop a clean, functional interior that can be admired without cracking the spine on the owner’s manual, they’re always happy to tell you about it. “Form really followed function on this one,” they’ll say, faux solemnity on their lips.

But the 3 Grand Touring is in such utter, self-effacing harmony, a driver feels the front seat as an extension of the wheels, the steering rack, the tunnel-mounted volume knob, the soft-touch material atop the dash—all the way back to the diminutive chrome pipes peeking out from the rear. Suddenly, Mazda’s “soul of motion” and “zoom zoom” marketing malarkey doesn’t seem so cloying. Toss out the lavender oil and burdock root, Sunflower; Mazda’s on that good holistic shit.

2. It Scoots Without Being a Dick About It

Not long ago, hatchbacks developing 184 horsepower were either puerile and screamo (see: UK-spec Honda Civics), or torque-steery and prone to warranty claims (see: MkV Volkswagen GTIs). Not to say the Mazda3 Grand Touring is aloof, but it builds speed with a nonchalance that’s quite distinct from its forbears.

Press “Sport” to the left of the drive selector, and the steering weights up a smidge, the shift points are remapped, and the gears held during deceleration. The car doesn’t labor, but it’s definitely trying to hold your attention. Unless you’re linking esses through the Sierra foothills at 6 AM, there’s not much gained by maintaining a steady 3,300 rpm, save for a little aural drama. Around town, it’s “D” all day.

Kudos to Mazda for making Drive and Sport feel so distinct. Sport isn’t smoke and mirrors; it really does sharpen the car. And Drive is just everyday gratifying. Ride damping puts Prolechariot in mind of the Mini Clubman—i.e., a junior BMW—with the suspension greeting every pothole with the whomp of a muted bass drum. “Buttoned down” is the operative phrase, one you’ll return to time and again.

People rave about the Mazda3 Grand Touring’s steering, and rightly so. There’s tactility and linearity and all that other insufferable car-guy stuff. What there isn’t is “quickness”—the quality of getting big directional changes from minimal steering inputs. In a relatively lazy right-hand bend, your hands will be at a Speed Racer-like 12 o’clock and 6 o’clock, because Mazda didn’t make the steering rack quick enough. Hand-over-hand is great if you’re dialing in mad oppo, but not when you’re holding steady behind an Aztek.

And for all the 3’s serenity around town, and aplomb in the corners, the highway brings an unbidden guest along for the ride: wash. The din can’t all be written down to the 3 Grand Touring’s 18-inch P215/45 tires. Sure, they’re sticky and have low profiles, but the white noise kicked up by the 3 seems hard-wired. It can be proper loud in here. Like, pump-the-stereo-or-crank-the-fan loud.

You’ll opt for the stereo. The Bose nine-speaker Centerpoint system may be as good as the benchmarking unit in the 2016 Honda Civic Coupe, 10-inch subwoofer notwithstanding. Even traffic reports on the AM dial take on uncommon resonance.

The long knives are out in Hofu, Japan. Though Mazda just celebrated the five millionth Mazda3 to roll off the production line, the future for this wily Prolechariot is anything but assured. And it all can be traced to a close relation.

Last year, the Mazda CX-3 compact crossover went on sale around the world. It accounts for just a fraction of Mazda’s total monthly sales in the U.S.—and mustered a mere tenth of the 3’s volume in April—but its star is ascendant.

Compact crossovers like the CX-3 appeal to a Prolecharian’s value receptors. It’s bigger, taller, and more robust than a 3 Grand Touring; achieves class-competitive mileage; offers all-wheel drive; and costs about the same. Hemmed in as you are by Pilots and Pathfinders, Edges and Escalades, nobody would blame you for wanting to ride, if not eye-to-eye, then at least eye-to-elbow with these behemoths. Never mind that the CX-3 surrenders 40 horsepower to the 3. It’s a crossover! You’re American! What more could you want in 2016?!

Revel in being that contrarian Prolecharian who gets it, and buy a 3 Grand Touring. Just do yourself a favor and drive that Civic first.