Mazda's middle child is the definition of “Netflix and chill.” Can you hang? 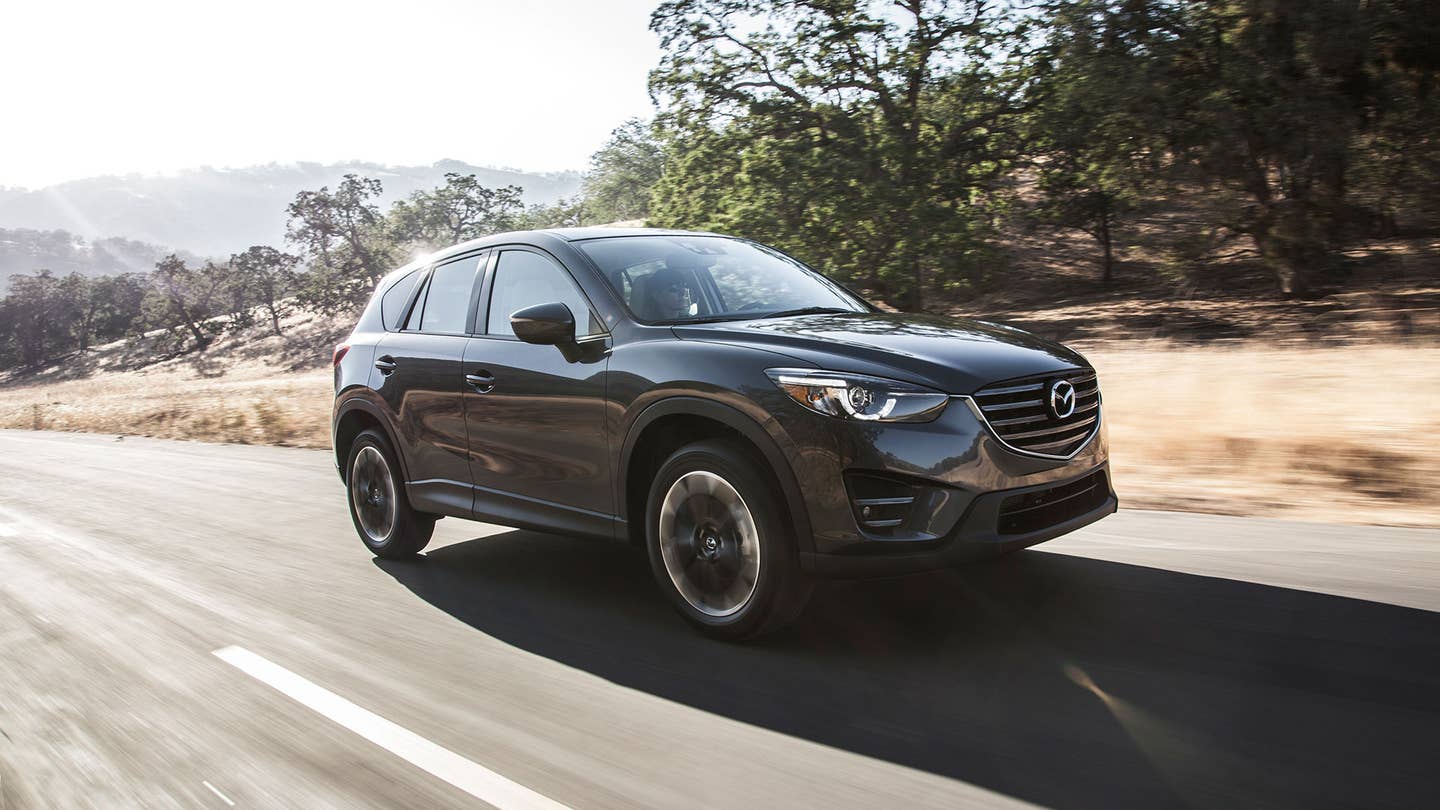 Check your wallet, America. Is there $33,652 in there? Hey, congrats! That will buy 10,200 heads of organic red leaf lettuce at Prolechariot’s local food co-op, 246 five-pound wheels of Cypress Grove Humboldt Fog goat’s milk cheese, or a new car at the nationwide average price. It also nets roughly 13 shares of what we’ll henceforth call The Mazda Thing. This is a unit of measure, equal to roughly $2,500, that must be taken into account when cross-shopping a Mazda against its nominal competitors. Shrewd Prolecharians will gladly pay the premium because they know it’s the difference between commerch and the O.G. sticky icky.

Here’s how it works. The price you see reflected on a Mazda’s window sticker is not a reliable indicator of the car’s worth. Prolechariot’s 2016 Mazda CX-5 Grand Touring AWD, painted a deep crystal blue and riding on 19-inch two-tone alloys, drives out the door for $32,340. To determine how it stacks up on price against crossovers like the Honda CR-V, Toyota RAV4, Nissan Rogue and Ford Escape, subtract the Mazda Thing from the CX-5’s sticker. You’ll arrive at $29,840, which is the number that should be employed in a cross-shop.

Why does a Mazda merit such grace? The $2,500 number is, admittedly, a fudge. It might actually be $3,500 or $2,250 for all Prolechariot knows. Bartenders may think of this quantity as the angel’s share: that mystical amount of a spirit that’s lost to evaporation while still in cask. Whatever you call it, it’s real: a serenity-inducing sense of quality and care of execution that only manifests in competitors—when it manifests at all—in fits and starts.

The intangible strengths of a 2016 Mazda CX-5 Grand Touring AWD cannot be accounted for on a spec sheet. This SUV is a space oddity, beamed down with sharper bone structure and cooler manners than Prolecharian crossovers are expected to possess. But are those intangibles at home on terra firma?

Here are the five things you need to know about the 2016 Mazda CX-5 Grand Touring AWD.

1. There Is a Light That Never Goes Out

Over a week with the CX-5 Grand Touring, little diminished Prolechariot’s bone for the thing. Don’t do that, you say. Allusions to anatomy belong nowhere near a car review. And yet the CX-5 deserves praise for giving human anatomy any consideration at all. The driving position and seat support are the stuff on which tenuously justified road trips are based. Parchment-hued leather is of a cut, stitch and quality befitting a Lexus. An F Sport Lexus.

Like the Mazda3 and 6 that share its platform, the CX-5, which received a mid-cycle facelift last year, packs a lot of features without suggesting it’s some tech-bathed cyborg. For one, it isn’t; spatial-awareness capabilities are limited to parking and lane-keeping sensors. (The 2016.5 CX-5’s $1,500 I-Activesense package corrects this; we drove a plain Jane ’16.) Nevertheless, the $1,505 Grand Touring Tech package creates a strong impression of “loaded,” while the spare application of dials and buttons—a Mazda hallmark—ensures clean, attractive surfaces.

And your fingers will linger. Dials have Audi-like knurling, the shifter… well, if you want to get angry, go to the Mazda consumer site’s gallery, where you’ll spot a six-speed manual in a Grand Touring-trimmed CX-5. Sorry, not for America. The only stick in the CX-5 sprouts in front-wheel-drive, Sport configuration. Balls.

Kneejerk pining for a manual transmission would be moot, were the CX-5’s six-speed automatic smoother. Climbing gears from a stop, the transmission exhibits some abrasive, sandpaper-y harshness the moment before kicking up a ratio. Whether in Sport or Normal drive mode, it’s there, and given how smoothly this box behaves in a 3 or 6, it’s perplexing. Do purchase decisions live and die on such details? Doubtful, but don’t go pigeonholing Prolechariot as another uncritical Mazda bandwagoneer.

A 2015 facelift brought a bit of the 2011 Minagi concept car’s derring-do to the party. To Prolechariot’s eye, the ’16 CX-5 is a reset button. The car is more squat, more planted on its wheels. And oh, what wheels. New 19s are game-changers, giving the CX-5 stance for days. Line the Grand Touring up against a CX-5 not so well endowed and the difference is embarrassingly plain

The impression is of a junior Jaguar F-Pace. You see where the money goes.

Prolecharians looking for Honda CR-V–caliber storage genius, however, may not find it. Though the 40/20/40 rear seat has quick-fold latches just inside the tailgate, the headrests will bonk the front seatbacks unless the latter are moved quite far forward. My father-in-law’s ’98 Volvo wagon has rear headrests that pivot and cantilever, stowing away neatly and quickly, and providing a long, flat bed with minimal fuss. C’mon, Mazda. Do better.

All the dynamic hallmarks of the Mazda3 Grand Touring and Mazda6 are present and accounted for in the ’16 CX-5: the refined 2.5-liter 184-horsepower engine, with its sonorous little barble; the delightfully weighted steering, which tightens up smartly in Sport mode; the marvelous damping, which admittedly carries a bit more mush to mitigate the CX-5's higher mass.

But don’t go expecting a Mazda3 on stilts. The CX-5’s elevated center of gravity would never allow for the 3’s suction-cup grip, and in a bend, it’ll lean.

Toggling to Sport mode will tighten steering and remap shift points to hold gears longer, as it does in the 3 and 6. Rarely does Prolechariot pine for bourgeois trappings, but what we’d give for an overwrought, BMW-like controller that decoupled Sport mode’s transmission mapping from the steering weight. The former is far too aggressive for around-town amblings, keeping revs in the 3K range at a sustained 30 mph. You, and your gas card, don’t need that.

Prolechariot would never cast aspersions on a rigid budget. Selecting a new car, as we say around here, is the second-largest purchase decision most Americans will ever face, and budget ceilings draw neat parameters around it. There’s a good reason why consumer guides publish lists with imaginative titles like, “Top New Cars Under $30,000.”

And yet some cars compel you to carve out wiggle room. With the CX-5 Grand Touring AWD, there’s no devil goading you to part with $2,500 more than you'd splash out for a CX-5 competitor. Nay, your hands, butt, eyes and limbic system compel you to dig under the cushions. Later, when your non-Prolecharian friends ask, “Is this a Lexus or something?” you’ll be reminded that The Mazda Thing is a thing—and you won’t even remember how much you paid for it.