Before I went on the launch for the new Hyundai Veloster N, I borrowed a 2019 Veloster Turbo R-Spec for a week. Discovering it stalwart fun on a squiggly road, I took my stepsister for a hard ride up a few Pacific coast canyons. She couldn’t believe we were in a Hyundai. When she told her mother about it, her mother—who’d owned a Hyundai minivan in the days when the company hadn’t elevated its reliability to the level of its ambitions—refused to believe it. She would sooner have believed God was in the backyard eating bibimbap and drinking soju than that her daughter and I had a rollicking good time driving a Hyundai.

Neither one of them, then, would know what to do with the Hyundai Veloster N, a three-door coupe that earns a place in any conversation of the world’s foremost hot hatches.

Hyundai chose the path of elegant restraint on the N's exterior, hewing closely to the lines of the standard Veloster and developing a style that falls between the timeless Teutonic speed macine known as the Volkswagen GTI and the cantankerous, erstwhile Ford Focus RS. The differences between the N and regular Veloster are few: in front, there's a gloss black grille underlined by a satin chrome slash, red trim on the front splitter wings, and air curtain winglets ahead of the front wheels; the flanks get high-gloss black mirrors, sharper side sills with red highlighting, and a choice of two unique wheel designs.

The rear presents the most obvious giveaway, as well as intimations of the Focus RS; a second wing rests atop the Veloster’s normal hatch spoiler, and a trapezoidal diffuser with red highlights encloses twin big-bore pipes. Extra points for the designer’s detailing, though: from the right angle, the triangular brake light merges seamlessly into the rooftop shark fin antenna. The N division’s Performance Blue paint works to good effect; carvings, shadows, and highlights pop in the trademark color. Darker colors, however, might swallow the less-pronounced aspects.

Hyundai perhaps chose excessive restraint on the inside. On the Turbo R-Spec, thin, bright accent lines on the instrument panel, steering wheel, and seats paid exponential dividends, preventing the sensation of a sarcophagus. In contrast, the only splashes of color in the Veloster N’s cabin are two driving mode buttons on the steering wheel and the Performance Blue seat belts. The accent lines on the instrument panel, also in Performance Blue, could put occupants in a driving mood—were they brighter. As it is, they come off as a faintly translucent blue plastic, unable to break ip the monotony. A skosh more vibrance inside would work wonders. Hyundai deserves a break here, though; no one gets verklempt at the Focus RS, Honda Civic Type R, or VW Golf R cabins, save those who ordered the digital dash in the latter.

But this car is about driving, not dilettantism. There will be two versions of the Veloster N: the standard hatch, and the version enhanced with a performance package. The standard version gets 250 horsepower and the performance version raises that to 275 hp, but both score 260 pound-feet of torque from the 2.0-liter turbo four. The standard car uses brake-based torque vectoring and sits on 18-inch wheels wearing 225/40 Michelin Pilot Super Sports. The performance package plops an electro-hydraulic limited-slip differential on the front axle, adds on 19-inch wheels on 235/35 Pirelli P Zeros tires, and subs in a front roll bar one millimeter smaller to manage understeer. European buyers can also get ‘Ring-grade goods straight from the factory, thanks to a package with lighter 19-inch wheels on Pirelli Trofeo R cup rubber.

The assembled mass of journalists at the car's launch only had the chance to drive the performance variant for roughly 50 minutes over two days —about 20 minutes doing two laps of the Nurburgring in a lead-follow quartet, and 30 minutes on a pre-set route that primarily involved fast sweepers, with no 180-degree bends. The tightly-managed show prevented the experimentation and lazy fiddling I would have loved to indulge in; nevertheless, my first impression certainly suggests this hot hatch performs exceptionally.

The electronically adjustable suspension—McPherson strut in front, multilink in back—offers four driving modes that work with some of the car's other systems: Normal, Sport, Eco, and N. The steering’s just a whiff lighter than ideal, even in N mode and especially on the track, but it's nothing worth seeing the manager about. The real issue is artificial feel; from lock to lock, there’s always the impression some hidden machine insists on helping you turn the wheel. It takes high g-force loads for tire feedback to push through and reach your fingertips, but you can always put the wheels where you want them. The only other off note is the crackles and pops during rev-matched downshifting in N mode. Instead of sounding visceral, present and alive, they sound like they’re happening behind a thick wall of cardboard—or like someone’s popping paper bags in the next apartment.

Hyundai earns solid marks for the rest of the mechanicals, though. The twin-scroll turbo slathers on power with barely a whiff of lag in the low end of the rev range. The short-throw, six-speed shifter replaces the Turbo R-Spec’s mildly-rubbery notchiness with a performance-positive notchiness. (Yes, there's a difference.) Good news, since a manual is the only transmission available until the eight-speed double-clutch gearbox appears in a year or so. The throttle response needs no learning curve, and the four drive modes manifest clear differences in control weight, power delivery, and ride.

Hyundai even developed its own brakes for the Veloster N, redesigning the stoppers found on the larger, heavier Kia Optima sedan. As N division honcho Albert Biermann said, “Anyone can buy a set of Brembos.” True, but it’s an interesting choice to make when one of the easiest and most profitable options on any performance car is a set of the famous Italian anchors available in multiple colors. But Hyundai knew what it was doing; the Veloster N brakes are excellent.

Seek torque steer or understeer and you’ll find them, but not in the normal course of driving. The LSD-equipped front wheels scramble their way through corners at grip-testing speeds, the rear following curtly, the whole hatch gently sliding to the outside well before you begin to plow. Keep the revs above 3,500, wait for the tri-colored shift lights to move from double-yellow into red before snatching the next cog, and even though the throttle approaches toggle-switch response in the N mode, all 275 horses funnel out of the corral with fluid promptness. The rev-matched downshift program—which can be turned off by pressing a button on the steering wheel—keeps the rear end from taking the lead if the driver flubs a throw through the closely-spaced ratios. And those N-branded calipers will abet a whole lot of late-braking passes on tracks worldwide.

None of this comes at the cost of twitchiness, either. While doing around 150 miles per hour on a stretch of unrestricted autobahn, the Veloster N bolted itself to the tarmac with German equanimity. As hot hatches go, this one serves up the goods.

Performance cars have never been Hyundai’s specialty in the U.S. The Genesis Coupe couldn’t keep its spot on the roster; the Veloster struggles to sell a thousand units a month. But the Veloster N is the product to create new believers, and it absolutely deserves a place at the hot hatch table.

There's a caveat, though: As enjoyable as it is, however, the funky-three door didn't feel to me like it had that magic je ne sais quoi that defines the best cars. But it’s possiblethat I just didn’t get enough time in the car to tune it to my liking, find its superlative aspects, and fall in love with it.

For now, it seems Hyundai will need to play The Price is Right with the Veloster N. If the brand plays its usual game,and puts plenty of pricing daylight between the Veloster N and the segment leaders, the tuned three-door should get the chance it deserves. It’s a long-money chance, but that has been Hyundai’s specialty. Compare the 1984 Hyundai Accent to where the brand is now, or the 2008 Hyundai Genesis to the present Genesis brand, or Hyundai’s first World Rally Championship entrant in 2014 to the 2018 racer currently leading the championship. The Veloster N, from that perspective, could be considered the first proper marker laid down in Hyundai’s quest for performance respectability—and an excellent omen. 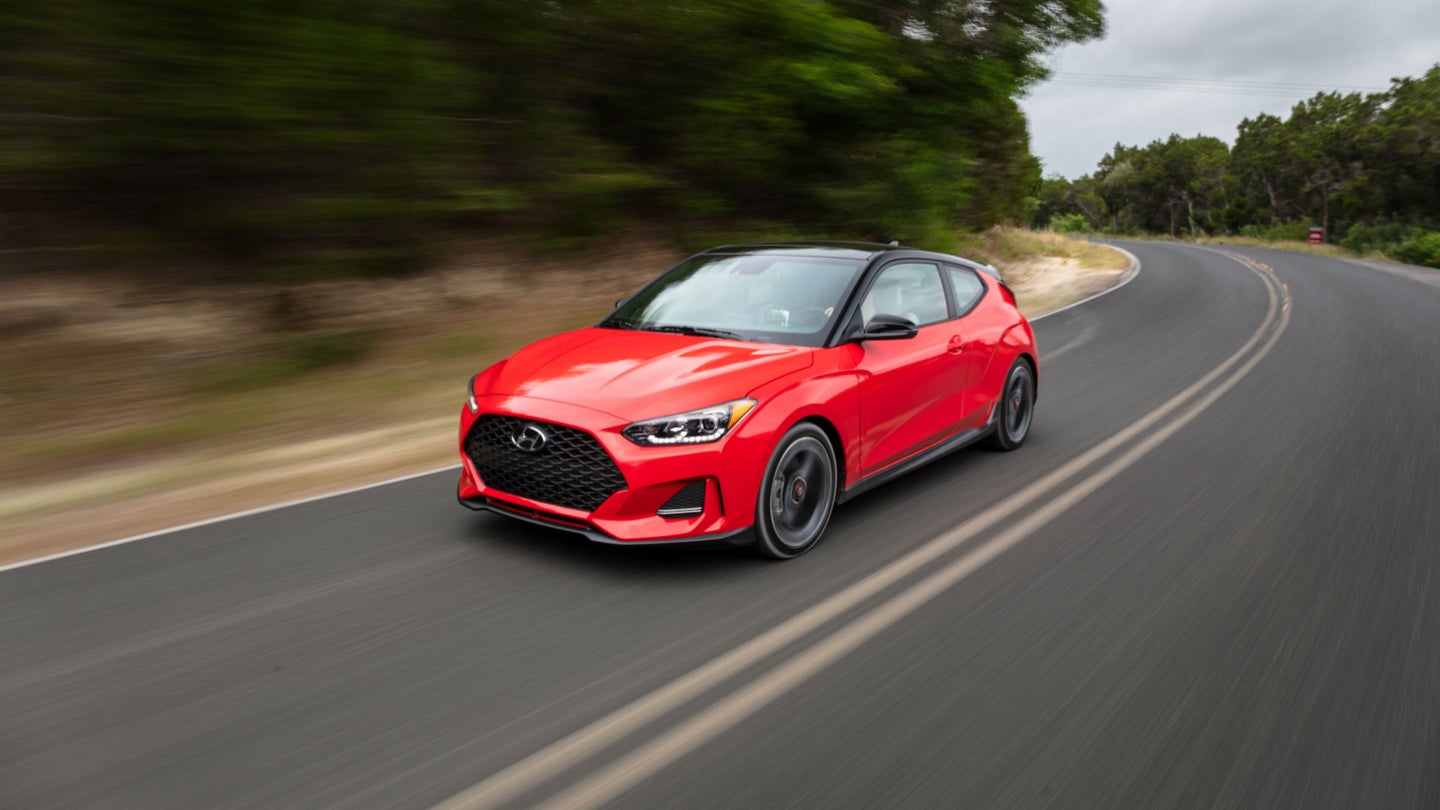 Is Hyundai’s face-lifted performance offering good enough to take on the current crop of hot hatches? 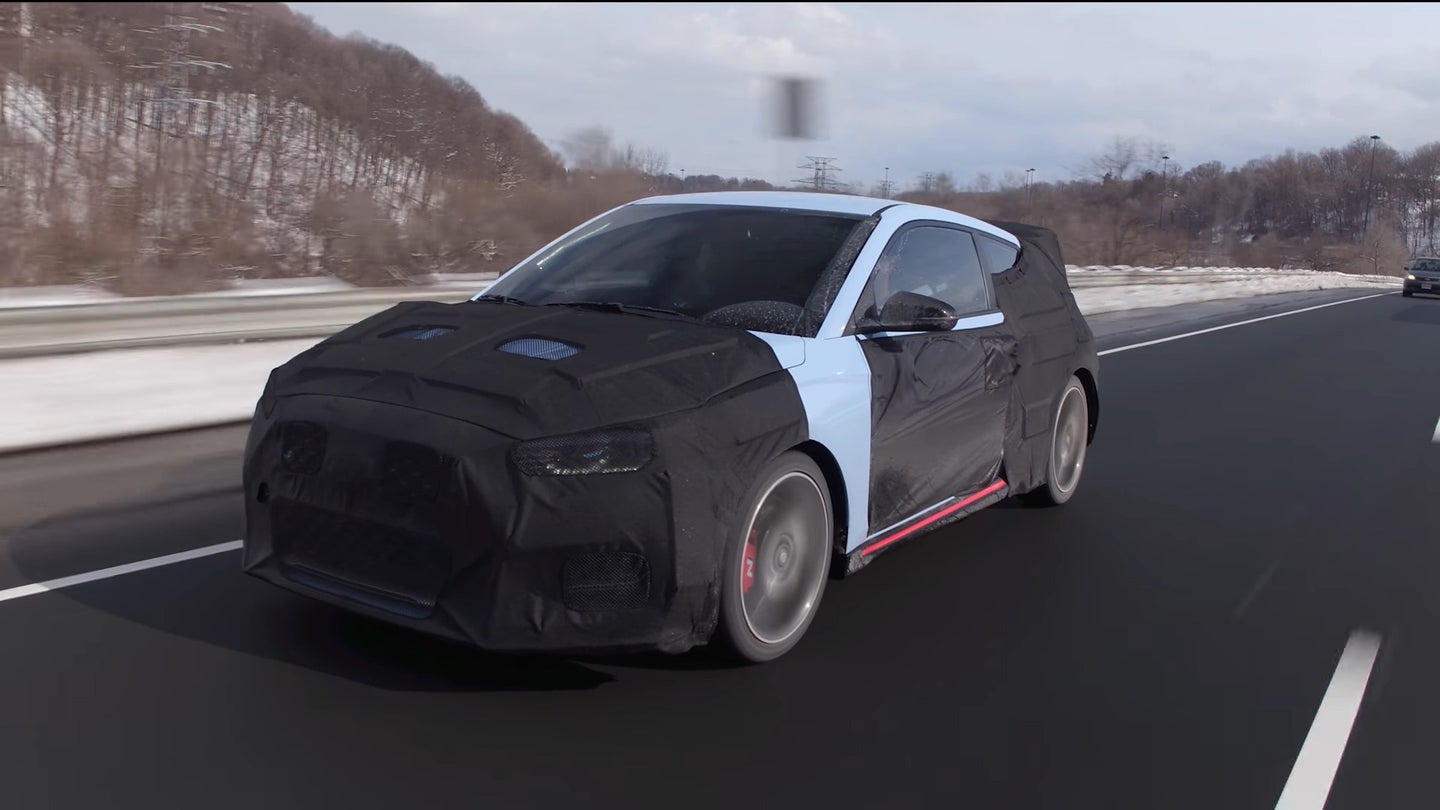 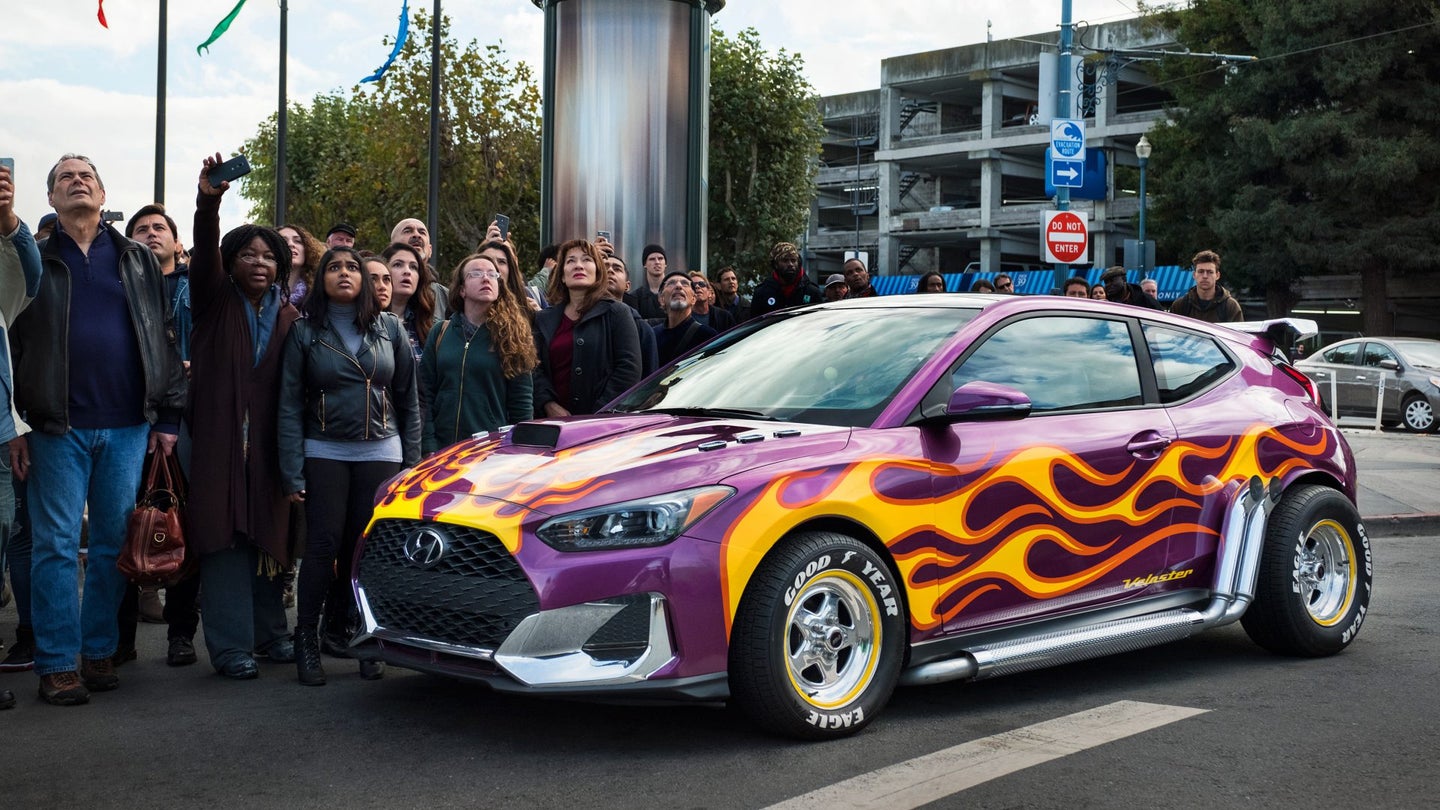 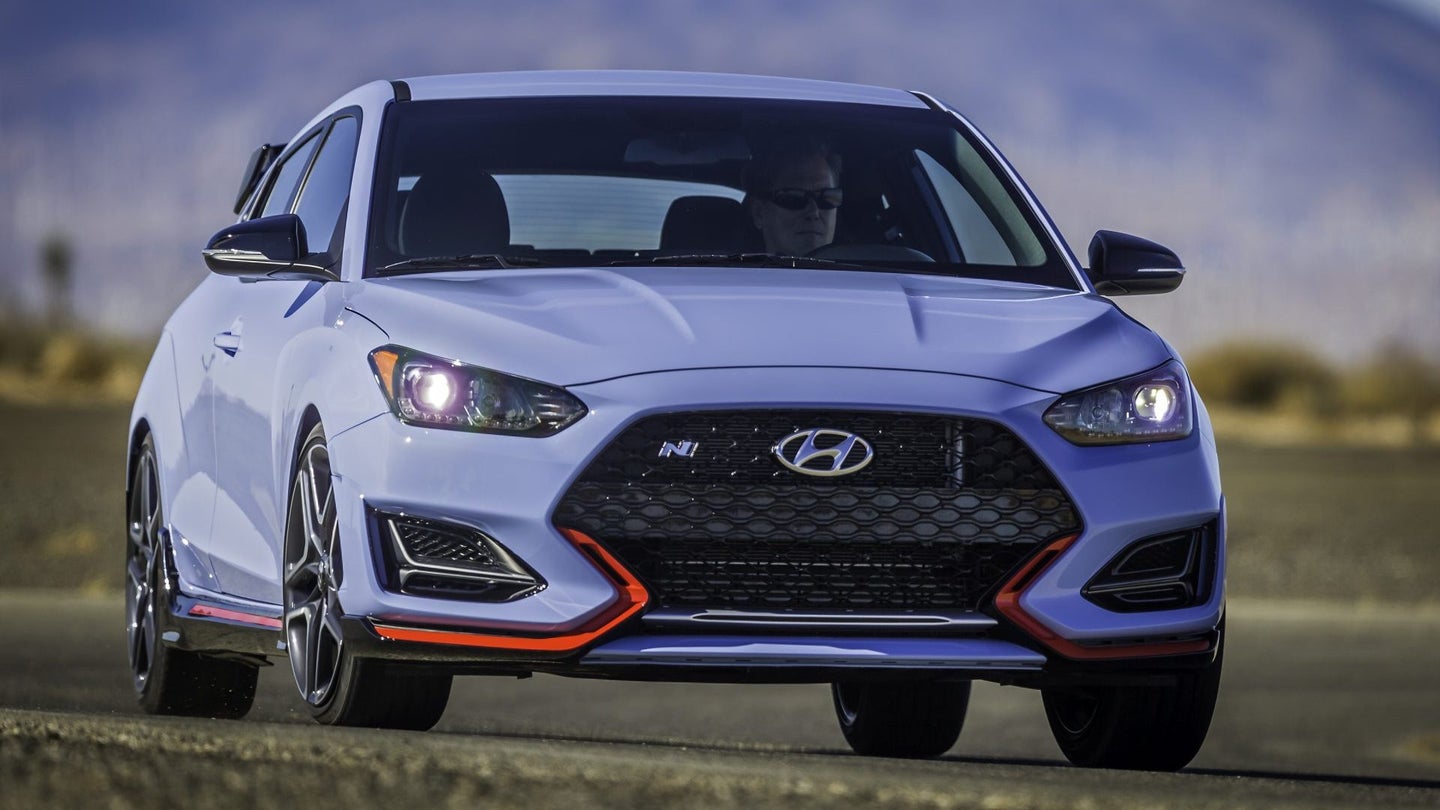 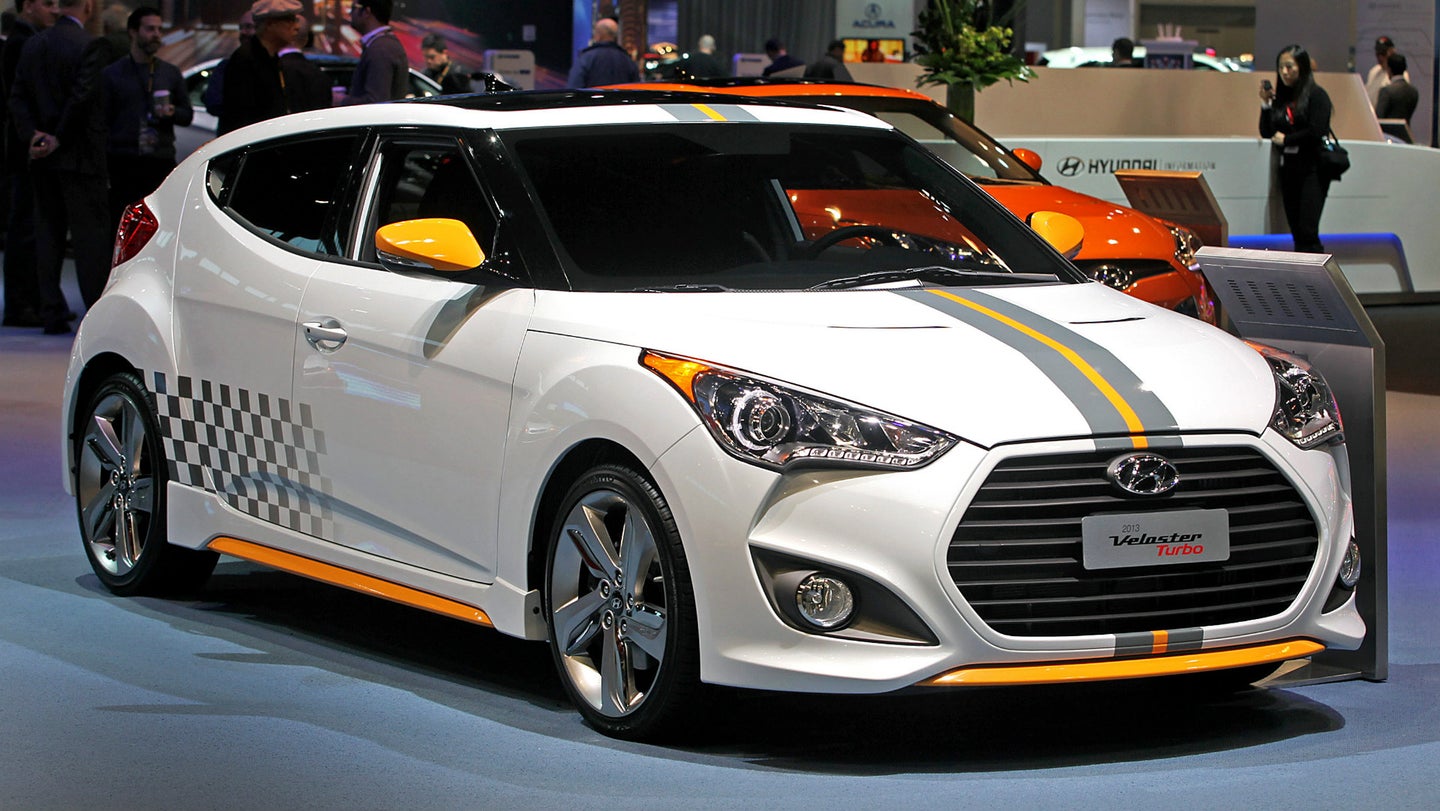