The sinusoidal popularity of hatchbacks in America can be difficult to understand. Sometimes it's up, sometimes it's down, but it never actually dies—it just hides in the shadows of subculture before surfacing again. One thing is clear, however: Every time a new player comes into the segment, the old hierarchy is suddenly thrown into question, even in an age where crossovers get all the attention. Cue the iconic Volkswagen Golf GTI and its plucky challenger, the all-new 2019 Hyundai Veloster N.

Hatchbacks are arguably one of the most practical cars you can buy. They’re compact, fuel-efficient, easy to drive, and generously proportioned out back. How much did any of that matter for this test? Zero, because we're sticking these two hot hatches on the famous Road America racetrack, a 4.04-mile monument to stars, stripes, and speed. How much performance do these little cars really pack—and more importantly, can the new kid on the block dethrone the king?

Sure, the Veloster N in sexy Performance Blue will always look better than the stoic GTI, whose Bob-Ross-approved color palette does little to counter its visual reserve. The Hyundai's 275 horsepower count also towers over the GTI's 228. But let's not forget there's a reason why the GTI has been the defacto hot hatchback since the '80s. There's more to it than design and numbers on a spec sheet.

I shoved my extra-large frame into the Veloster N and was immediately rewarded with a pleasant surprise: I could squeeze in with my full-face racing helmet on, which is more than I could say for the GTI. My eyes and hands immediately went for the steering wheel. Chunky in diameter, wrapped in smooth, perforated leather, with thick stitching at the seams—it felt like that of a high-dollar sports car.

The 2.0-liter turbo fires to life with a bark that's louder than expected. Grabbing first gear in the performance-oriented N driving mode—that's right, contrary to what most automakers are doing nowadays, Hyundai has given this pocket rocket a proper manual—we exited pit lane and shot up to 70 mph in short order. Arcing into Turn 1, a stab at the brakes revealed a firm bite and a nice, linear progression. Wheeling to the right, the chassis rotated every so gently underneath me as we unspooled out of the turn. So far, so good.

The little Veloster felt alive and willing to give me more. Road America's Turn 2 comes quickly courtesy of a downhill straight feeding you into a 90-degree right-hander. Braking from 80 mph and downshifting from fourth to second, it was easy to appreciate the gearbox's crisp throws and smooth auto rev-match feature. Purists may balk at letting a computer heel-toe, but The Drive is for whatever it takes to get more people comfortable with driving stick. It also makes it easy to fall into a rhythmic dance. Brake, downshift, turn, accelerate, wash, rinse, repeat.

There's a reason why Road America is dubbed the "National Park of Speed." Over the next three or so miles I topped 100 mph three times, hooking through the famous Kink at 85 mph without even thinking about it. The Veloster performed like a seasoned competitor through it all. There's some old-fashioned fun baked into the chassis—it's just a little loose, enough to remind you that hey, you're driving a steroidal economy car. It doesn't take itself too seriously—it just gives you what you want, when you want it. That said, I'd be lying if I said the raspy exhaust note wasn't one of its best features. Everything else is 9/10ths of the way there, but the noise is what they nailed most.

Slipping into the Volkswagen Golf GTI (2.0T Rabbit Edition to be specific) is a quick study of why the original hatch is dearly loved. The exterior may be straightforward, but it's hard not to smile at the plaid seats and a golf ball shift knob within. Actually, it's impossible. Those seats are supportive, not too wide but not too huggy-bear, and you just can't beat the ergonomics in this Germanic gopher. The steering wheel, however? I'll take the Veloster's. The Golf's is too big.

In contrast to the Veloster, the VW's turbo four-cylinder engine starts with little drama and slips into a barely perceptible idle, and the car serenely cruised to the pit lane exit in near-silence, even in Sport mode. In seconds, I was blasting down the main straightaway into Turn 1 again. Right away, the GTI showed its perfect balance and composure regardless of speed or steering angle. It's more dialed-in, more direct in its movements. That allows you to push it just a hair more—despite the horsepower deficit (228 vs. 275), the GTI blasted through Turn 4 at 110 mph, about three ticks faster than the Hyundai.

I stepped hard on the brakes and clipped the left apex before blasting uphill under the Corvette bridge. The seven-speed dual-clutch transmission, the suspension, the relatively light steering, it was an all-empowering combination. Even the lack of exhaust theatrics helps you concentrate more on the track.

Road America ends its long loop with a series of flowing uphill corners lined with enormous concrete barriers, and the whole thing was absolutely no match for the Golf GTI's agility. The car waltzed along the racing line with preternatural grace. Its biggest strength is its compliant, versatile chassis, which offers tons of feedback—honestly, more feedback than either the steering rack or the transmission. Both are tuned more for daily comfort than anything else, and though they're up to the task on track, those looking for unassisted steering or gunshot shifts might be disappointed.

Unlike the Veloster, the GTI didn't crackle and pop as it cruised into parc ferme, and it didn't leave me with an ear-to-ear smile on my face. Despite showing tremendous capability and German-like precision, the rollercoaster felt more like a technical exercise than a quest for fun.

Burbling back into the pits in the Hyundai, one thought immediately stuck out—the GTI is as good as dead. How could a rigorous German beat this flamboyant Korean in a battle for fun? Driving the Volkswagen softened my opinion somewhat. The Golf is arguably the better daily for most humans thanks to its spacious back seat and four actual doors, and it remains a precise instrument that doesn't shout about its abilities. But this test—non-instrumented—is about determining which is most at home on a track, and in that regard, the Hyundai Veloster N is the clear winner. Take this car seriously, even if it doesn't take itself seriously.

From the moment you grab that steering wheel and push that big blue N button, it simply draws you in. It screams like a pocket-sized banshee when you mash the throttle. It hurtles through space with charming abandon. It may not be the best hatchback—it has three doors for Pete's sake—but it most certainly is the most fun you can have for under thirty grand with a new hot hatch on a racetrack.

Special thanks to the Midwest Automotive Media Association (MAMA) for providing the vehicles and venue for this test. 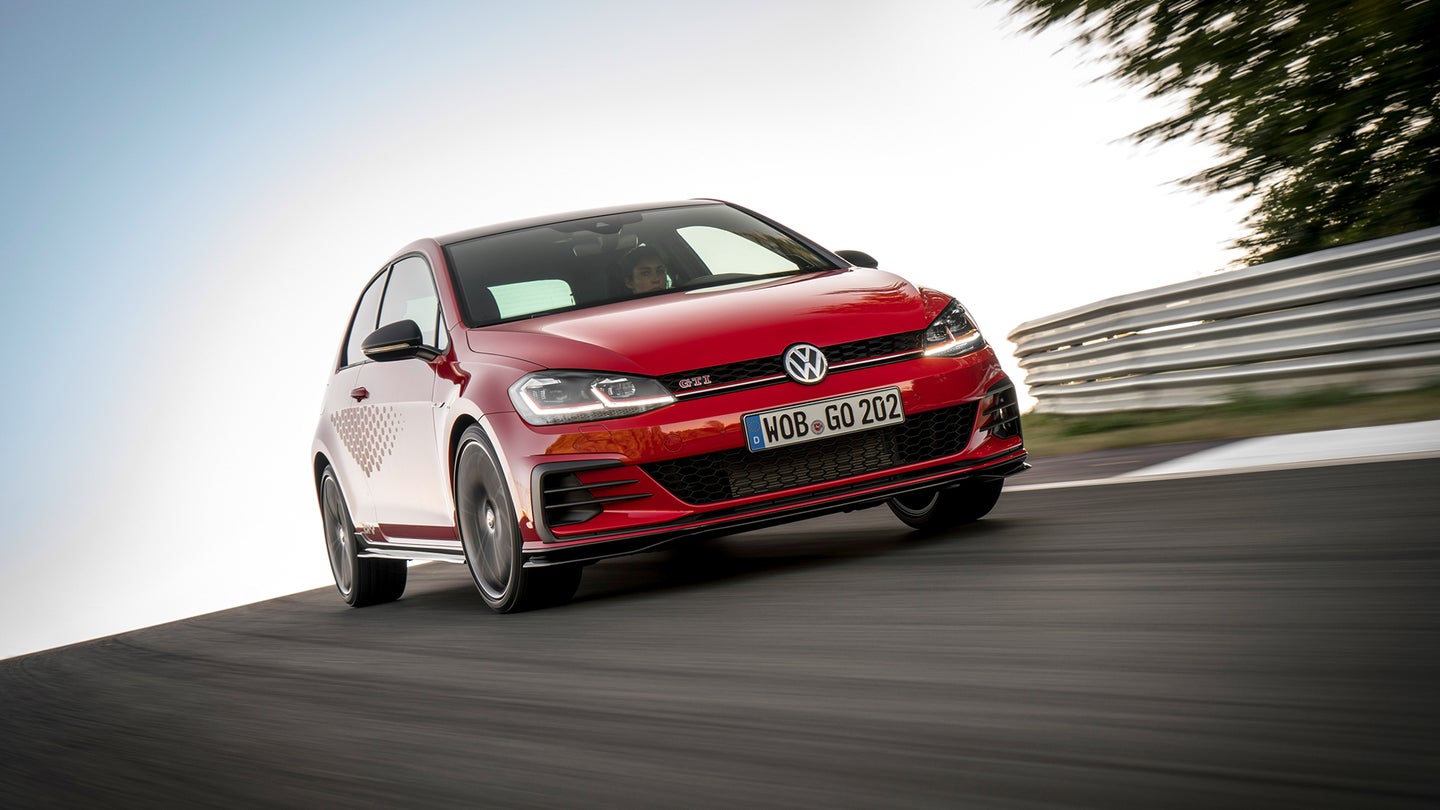 A boost in horsepower and a hotter appearance fills the space between the GTI and the Golf R. 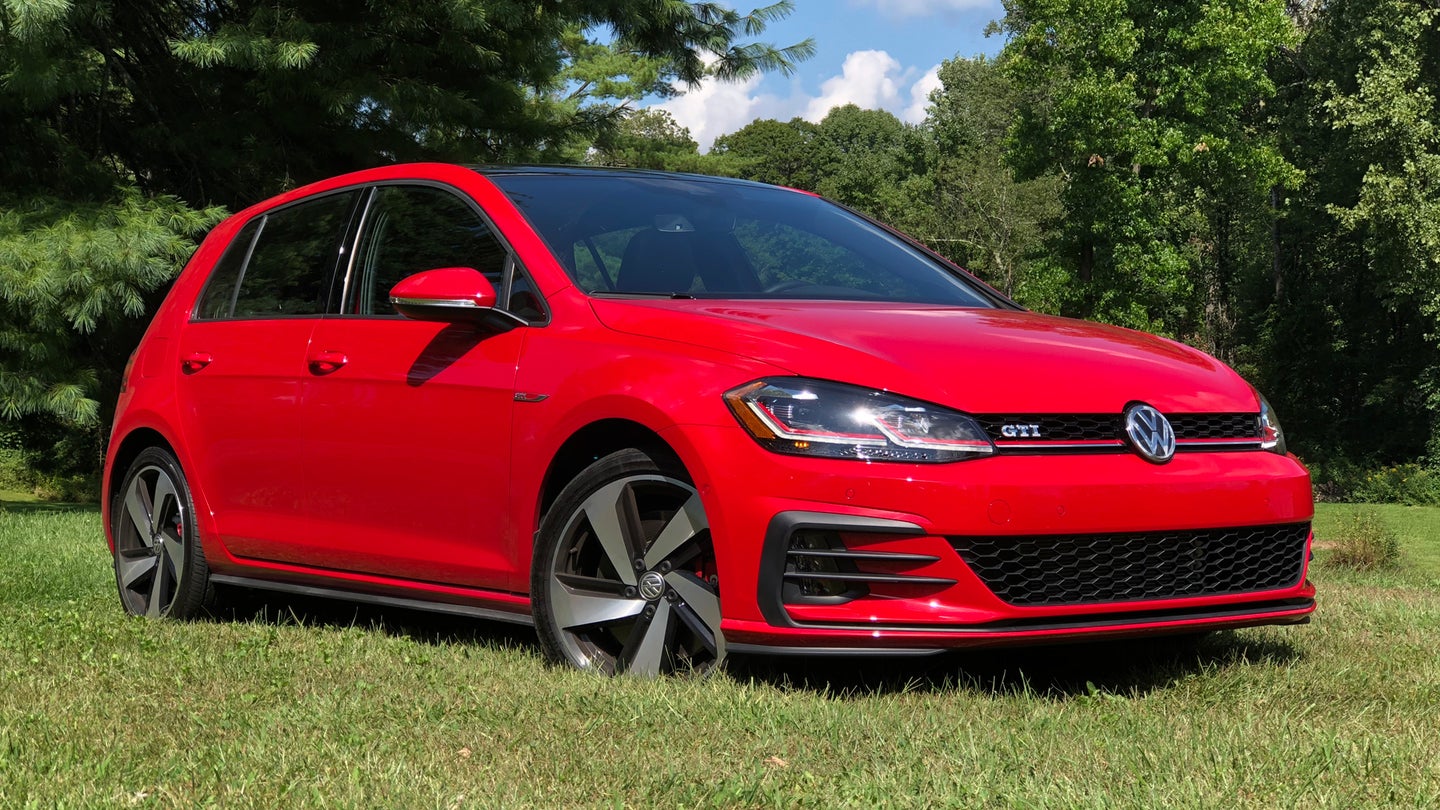 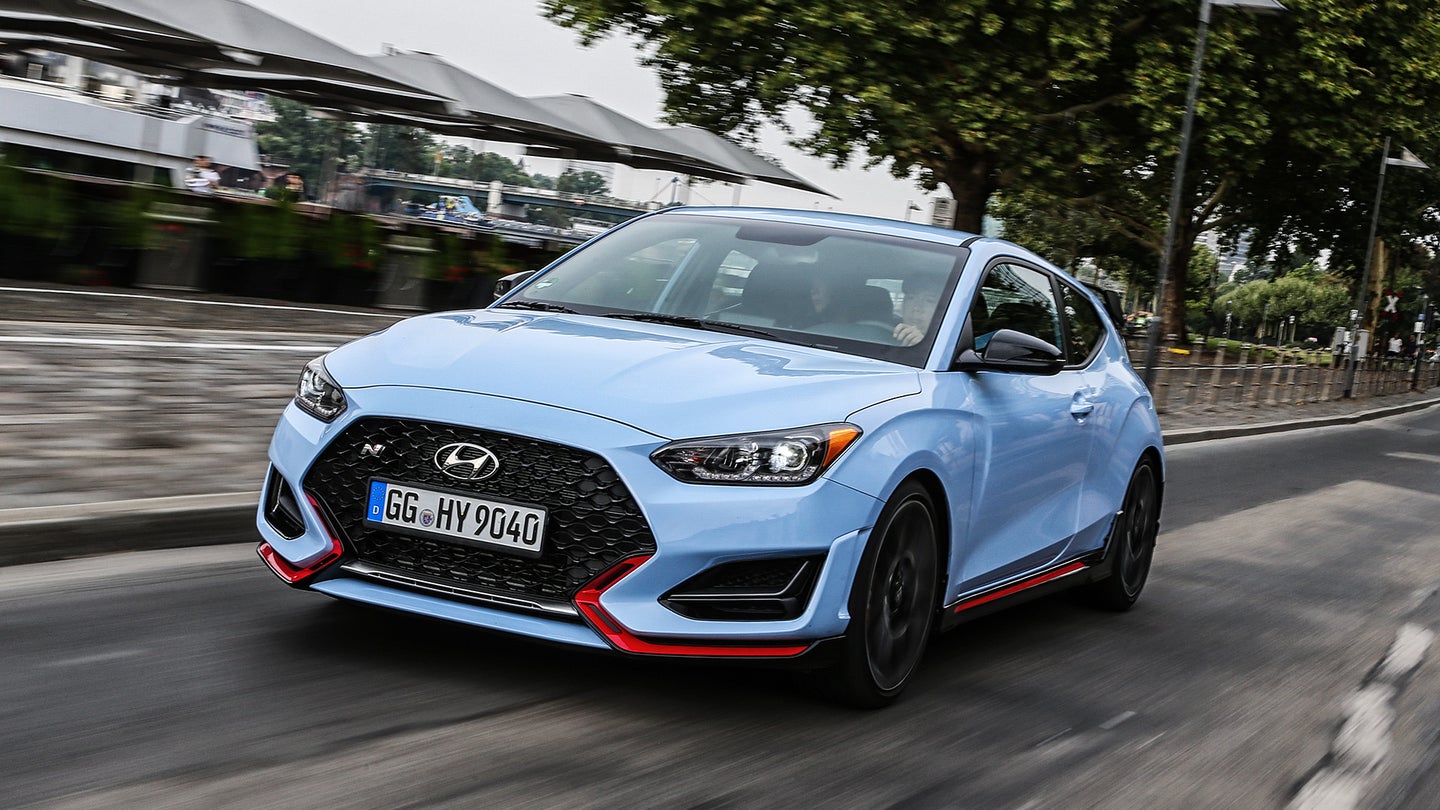