Volkswagen's compact SUV gives Americans what they want: Space, safety and tech. You want performance? Get an Audi. 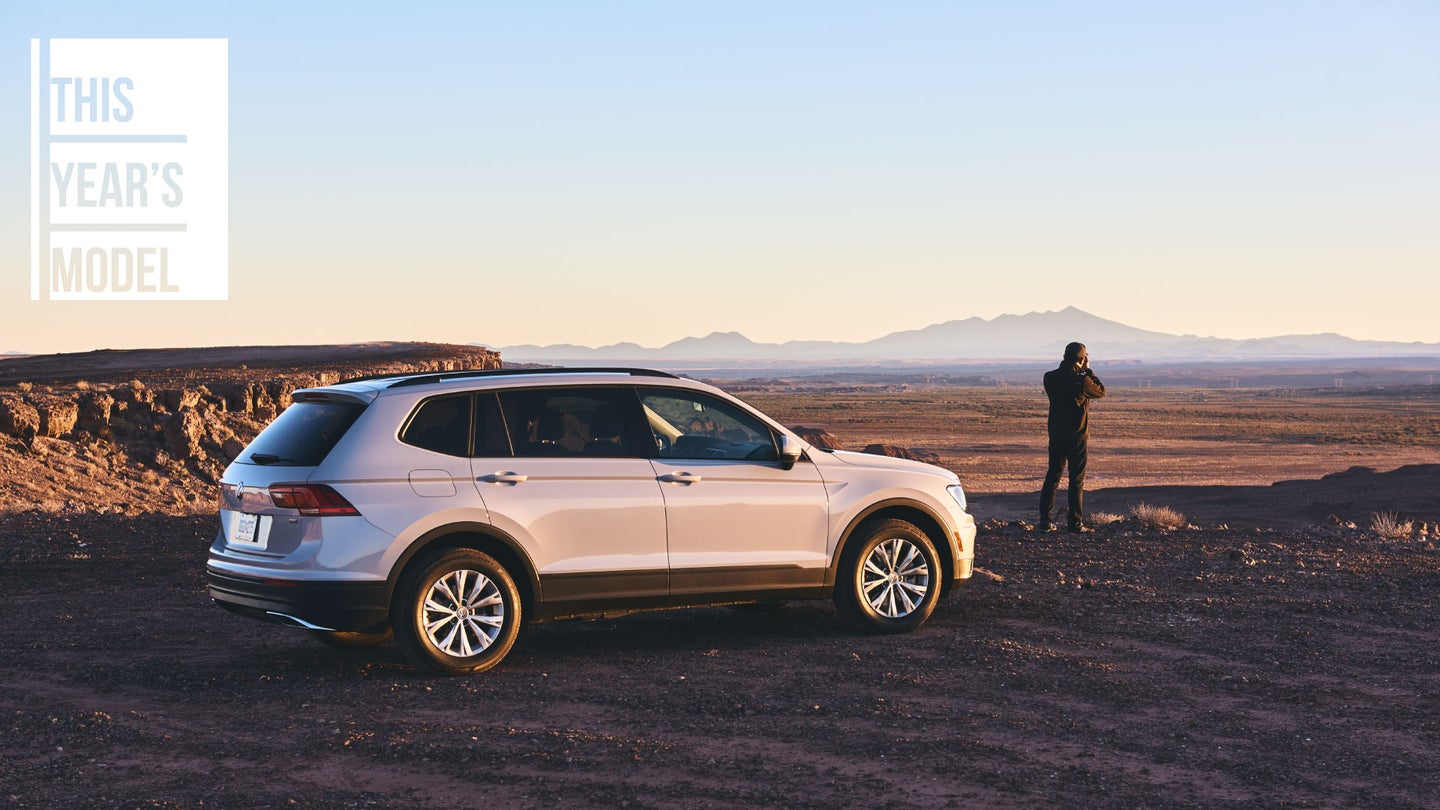 Volkswagen’s post-diesel rehabilitation is continuing with the new second-generation VW Tiguan. Because nothing says “I’m sorry” like a compact SUV, the equivalent of a dozen red roses for Americans who can’t get enough of these tall-stemmed rides.

Like the larger Atlas, the Tiguan offers those roses in a Costco-sized pack. The Tiguan pushes the definition of a “compact” SUV, stretching 10.6 inches longer than the teensy Tiguan of old and 4.5 inches beyond the segment’s sales benchmark, the Honda CR-V. Unlike the original VW Beetle, no one will wonder how many people can stuff themselves into a Tiguan. Actually, I take that back: I honestly had no idea VW had fit an optional third row into the Tiguan until I poked my head inside my test model. And my impressions of this stationary Tiguan were almost wildly positive. This sucker is enormous and comfy inside, including more second-row legroom than some midsize sedans. Smartly designed throughout, the up-level versions especially carry that familiar VW scent of a budget Audi.

It’s too bad I didn’t just stay put in The Drive’s Brooklyn courtyard, blasting Isley Brothers funk through the excellent, subwoofer-enhanced Fender premium audio system. Because once in motion, if you’ve ever thrilled to the Germanic handling and spunk of a typical VW, the Tiguan feels like the letdown and compromise it is.

The Tiguan shares the metal-barred, bulldog face of the larger Atlas, but this SUV is much better looking overall: Not flashy, but fit and ready for work, like a contractor with a brand-new tool belt. A concave, Audi-esque character line—which photos don’t do justice—bisects the door handles and wraps the flanks, so finely drawn that you can imagine the designers scalloping it in clay form. Optional 19-inch alloy wheels are VW-handsome, as are optional LED headlamps. Even the underhood area looks especially spiffy, all the way down to its hydraulic lifter strut, making it clear that no detail escaped the eyes of designers and engineers.

Yet the Euro-style interior is the best reason to buy the Tiguan, from bountiful interior space to its carefully-wrought seats, shift lever, ergonomics, and other details—all the things that VW fans have come to expect. That’s especially true for pricier versions like my top-shelf, front-wheel-drive Tiguan SEL Premium, with a light gray leather interior that was fittingly luxurious for an SUV priced at an all-in $37,150. As in the Atlas, some budget plastic divulges VW’s new, built-to-a-price imperative on SUVs, but there’s less of it.

Most Tiguans get the VW Digital Cockpit, a version of the similar system in Audis and Lamborghinis—including the ability to splash full-width maps across the 12.3-inch driver’s display. VW’s infotainment systems have trailed the industry curve since the days of Blaupunkt AM/FM radios, but the company finally has a good one. An 8.0-inch color screen features oversized icons, phone-style touch controls and apps, and 360-degree vehicle views via four exterior cameras. A solid navigation system features handy proximity sensors, with a row of icons appearing as your hand nears the screen. Apple CarPlay and Android Auto come aboard for the new model, as well.

As noted, second-row accommodations are generous, especially if you forego the strictly kiddie-sized third row that’s a $500 option in AWD models, but (unfortunately) comes standard on front-drive Tiguans. Unless you need to stash children in back or torture the in-laws, you really, really want a two-row version, despite having to spend $1,300 more for 4Motion AWD.

Forgoing that third row creates a maximum 38.7 inches of second-row legroom, 2.2 more than the three-row model—space that adult passengers will greatly appreciate. Those second-row seats, split 40/20/40, are better-bolstered and more comfortable than some rivals, with fore-aft sliders and recliners. Eliminating the space-hogging third row also opens up eight additional cubic feet of maximum cargo space in the rear. So equipped, the Tiguan 4Motion virtually matches the magically packaged CR-V, at 73.5 cubes versus 75.8 for the Honda. And to give you an idea of how much space we’re talking, the current CR-V’s flat load floor is nearly 10 inches longer than in the previous-generation Honda.

Testing All 3 Rows of the 2018 VW Tiguan
The Drive

The VW's hatch opening is wide, the liftover height nice and low. The acid test came when I loaded my new cyclocross bike aboard (front wheel removed, second-row seats folded), and it fit with several inches to spare. The previous-gen Tiguan could barely fit a Big Wheel aboard. That smaller Tiguan—now renamed the “Tiguan Limited,” in the vein of the warmed-over Chevy “Malibu Classic”—soldiers on in VW showrooms for 2018, in a budget trim that starts from $22,895. If you see that rebadged Tiguan skulking around dealerships, you might chuckle over its pert, impractical dimensions.

Just don’t test-drive the old one, because it’s also lighter, faster, and more fun-to-drive than its successor.

With an eye toward economy but a blind one to performance, this Tiguan gets a reworked version of the 2.0-liter TSI engine with 184 horsepower and 221 pound-feet of torque. That compares with 200 horsepower and 207 pound-feet for the previous model. With 16 fewer horses, the new model also shoots above 4,150 pounds in options-stuffed, AWD guise—about 300 more than the old Tiguan, and about 550 more than a loaded CR-V with AWD. You don’t need the Pillsbury Doughboy to tell you that this isn’t a recipe for gits and shiggles.

The Tiguan is slow like a Scottish bog, working its way to 60 mph in a stressed-sounding 9.1 seconds. Most of the VW's rivals are a full second quicker, at least. A Toyota Prius is only a second slower to 60 mph, and even an SUV laggard like the Toyota RAV4 does the deed in 8.4 seconds. The Tiguan's four-banger sounds almost diesel-clattery in its low ranges, and while there's decent torque down there, there's not much anywhere else; torque peaks and planes out between 1,600 and 4,300 rpm. Compared with the previous six-speed, the Tiguan's smooth eight-speed automatic transmission helps a little, but not enough. The VW upshifts well before its purported 6,500-rpm redline...but that won’t matter, because it’s basically out of steam by 5,500 rpm anyway.

The massive VW Atlas, the German Canyonero, doesn’t exactly light the road afire, either. But despite leisurely acceleration, the Atlas still has that old VW charm. Not so the Tiguan. Its steering is light and indifferent, the body lolls in corners, and even the optional 19-inch tires offer a surprisingly wimpy amount of grip. Like a couch-potato pal, the Tiguan has no interest in coming out to play, and that in turns saps your own enthusiasm for driving. Tuned for comfort uber alles, the suspension ably smoothed out the ride—but it was still thrown off by more-sinister potholes, admitting some jolts and shudders in the cabin.

The VW’s fuel economy is also bottom-of-the-petroleum-barrel for its class, at 22 city / 27 highway miles-per-gallon (21/27 for AWD models). In the VW’s defense, I did see 30 mpg on one highway trip, well above its official EPA estimate. Still, every SUV in this class is rated at 30 or better on the highway, including the class-topping CR-V that serves up to 28/34 mpg. Hell, even the condo-sized, VW Atlas manages 22/26 mpg with its stronger four-cylinder engine (offered in front-drive versions only)—one mpg better in the city than the AWD Tiguan, and one mpg less on the highway.

Regarding price, the Tiguan starts from $26,095, about $950 more than a base CR-V. As with most of these trucklets, you can go nutty on features. My front-drive Tiguan SEL Premium, the fanciest version, rang up $37,150 as tested. (You can add AWD to any Tiguan for $1,300.) That price includes a welter of gear, including leather seats, a hands-free power liftgate, adaptive cruise control with automated emergency braking, a blind spot monitor with rear cross-traffic alert, Fender audio, LED headlamps, a panoramic sunroof, 19-inch alloy wheels, the VW Digital Cockpit, and more.

The biggest head-scratcher for me comes down to the fact that the Tiguan is built on the VW Group’s proven, modular MQB architecture that underpins such stellar automobiles as the Golf, GTI, and Audi A3. How VW managed to water down all that engineering goodness (aside from the Tiguan’s belly-flopping weight) is beyond me. What’s frustrating is that there’s little wrong with the Tiguan that a stronger engine and a sportier chassis tune couldn’t solve. This chubby baby is crying out for the Atlas’s aforementioned base engine, the 2.0-liter turbocharged four borrowed from the GTI that puts out a healthy 235 horsepower and 258 pound-feet of torque, as an option, at least.

Then again, the joke may be on us....with “us” meaning anyone who equates Volkswagen with German performance for the Volk, the masses who can’t afford BMWs, Benzes or Audis. This greatly-enlarged Tiguan will almost surely outsell the old one, because it checks the boxes for American SUV shoppers for whom performance is often an afterthought. Still, that blasé—if not oblivious—attitude toward peppy, fun-to-drive performance does not describe the traditional VW buyer. In other words, VW must be banking on more-mainstream SUV shoppers—the ones who tend to be quite happy with their Hondas, Toyotas, Nissans, Fords or Subarus—to take this Tiguan for a test drive. As for diehard fans of the brand, I’d say VW owes them an apology, one that’s got nothing to do with diesel.