For the first 40 minutes in the new Subaru BRZ, I felt like I was in a fight with the car. Not, to be clear, fighting in the sense of some heroic man-versus-machine struggle as I try to wrestle the thing at its limit; more like bickering, really. The car just didn't sound happy, and I took it personally.

The new BRZ Performance Package is the most significant update to the rear-wheel 2+2 since the sports car was unveiled in 2012, and in the right context it remains one of the biggest driving-enjoyment bangs you can get for your bucks. The subtle, supple exterior styling is even handsomer thanks to a wider and lower front bumper and full LED lighting front and rear, but the car's most serious flaw—the harsh, nasal engine note and its pained insinuation that you're in the wrong gear, or on the throttle too much, or not enough—has endured. An unlovely singing voice may seem like a small quibble, but it's grating enough that, despite the 2.0-liter flat four's 5-hp and 5-lb-ft bumps (up to 205 hp and 156 lb-ft thanks to a new aluminum intake manifold replacing the plastic one) and some significant suspension upgrades to one of the most magical chassis on the market, the everyday driving experience is subsumed into a sort of passive-aggressive whinging. Even with the Sierra Nevada's breathtaking frosted peaks filling the windshield during the sprint from Granada, Spain to Circuito Mike G Guadix, it takes an emotional toll; it's an ever-present passenger who never stops hectoring, the automotive equivalent of an open-ended harangue: "I thought you were going to take the garbage out?" and "didn't we agree to get the other kind of almond milk?" and "I'm sorry that my mom was trying to help."

Happily, there is a cure, and it is a liberal application of race track. Get this thing on a circuit and the aural unpleasantness is washed away by tactile ecstasy. There really are very few cars at any price that so effortlessly link brain to hands to ass to asphalt like the BRZ. When you're talking $28,840 for both the Performance Package and top-of-the-line Limited trim, there are really only three: the Mazda Miata, the Ford Fiesta ST, and the Volkswagen GTI. Take away the front-drivers, and you're left with the Miata, arguably the greatest and certainly the most enduring everyman sports car ever, as the main competition.

That's some serious company, and compared to the dark, flat, plasticky Subie interior, the MX-5's clean, considered layout feels downright near-luxury. (To be fair, decades' worth of development will help one get the small stuff right, and it's a steep curve against which to be judged.) Optional Recaro seats and contrast stitching announce the car's sporting focus, but there are some glaring missteps. First is the small, low-res infotainment screen—now with color!—which, despite being updated, still looks at least a decade old, and features apps both anachronistic (subscription-only Garmin GPS) and bizarre (an "eBird" bird-watching tool). Also, the steering wheel now features switches and controls; this is by customer demand, as Subie's original impulse was to keep the wheel just for steering. In the same vein as the infotainment screen—now with color!—the otherwise handsome-enough analog tachymeter is intersected by a low-res, rectangular digital screen for speedo, fuel, trip, and torque and power readings. It spills over from the rightmost "gauge," where it conspicuously does not fit; a square peg jammed through two round holes. Between that and the infotainment screen, the effect is one of deliberate but poorly executed retro aesthetic, like a hipster craft beer bar with an Atari console wedged in front of the taps.

But, again: spend some time working through the gears with the snappy short-throw shifter, or tap-dancing in the perfect pedal box, and those issues disappear like a puff of tire smoke. Likewise, while Subaru stubbornly refuses to drop in a bigger motor or add forced induction (weight savings is the highest priority for the vehicle being the stock answer), if you focus on carrying momentum and enjoying the lovely, intuitive steering, you'll forget completely that you're angry about that. Circuito Guadix is a short and very technical track, one where there's no long straight to make you miss hair-flattening power, and Subaru provided long sessions of open lapping, in both directions. The Performance Package gets you bigger Brembo brakes front and rear, necessitating bigger aluminum wheels, and there's plenty of stopping power, and it lasts. New Sachs ZF dampers add comfort and stability, according to Subaru; we can attest to the former—it rattles fewer bones than the stock BRZ's bone-rattling ride—and we'll take their word on the latter. (Note that the front springs are slightly stiffer for better turn-in response, and the rear springs slightly softer, for aforementioned comfort.) The whole package, which runs just $1,195, adds just 20 pounds. You don't feel it.

What you do feel is, well, freedom. The electronic stability-control systems, which were from the get-go the most permissive, afternoon-drunk nannies around, are even further relaxed. The old Sport mode is now a more-trusting Track mode, and given the minimal power, extremely low center of gravity, and overall balance of the car, there's really no reason to keep the controls on, ever; slides, easy to induce and lovely in the making, are about as stressful as playing with a Golden Retriever puppy. Around Circuito Guadix, the car encouraged you to do what you wanted—long, lazy drifts or precise, time-hunting speed runs—and rose to either challenge. (Though, on Michelin Primacy HPs, the BRZ remains criminally under-tired. If purchasing, do swap out for a proper pair of shoes.) For a few hours, it was a grin-machine. And then I had to drive back to the hotel.

When the BRZ debuted, though we did not know it at the time, we were at the end of an era of SUV bloat and the cynical escalation of the muscle car horsepower wars. At the time, an old-school, rear-drive 2+2 with a manual shifter seemed like a revelation, a harkening back to a more pure form of driving. Subaru, and Toyota/Scion, seemed willing to gamble on the fact that the idea of the car could outrun the scent of its parts-bin aesthetic and obvious corner-cutting. And for a moment, they could, because we were happy to have another affordable driver's car. Then, out of the blue and in the space of a couple years, small cars were amazingly good, and then the entire landscape expanded with things like performance crossovers and proper Korean luxury vehicles and upstart electric cars that can beat a Ferrari 458 off the line. The automotive world is a weirder place now, and in that weirder place we want our sports cars, I suspect, to at least get the simple things right. I very much want to love the BRZ, but it won't let me, at least not all the time. It's too aurally irritating, too obviously technologically deficient (note to all automakers: cutting out tech entirely is better than doing it poorly), too stuck on an old idea of itself.

There's hope, though. When I called the Performance Package "the most significant update to the rear-wheel 2+2 since the sports car was unveiled in 2012," that was a bit of a dodge. A couple years back, in Japan, I tested a "tuned-by-STI" version not meant for the States. With the simple addition of a cold-air intake and cat-back exhaust, the sound became, if not sonorous, at least able to stir excitement at the right moments. The suspension was more pliant and agreeable. The tech ... well, the tech still sucked, but subtraction is usually cheaper than addition, so perhaps there's a fix there. But it was amazing what a few personality upgrades could do. It was the first time I could get into the car, close the door, and think: we're going to get along. 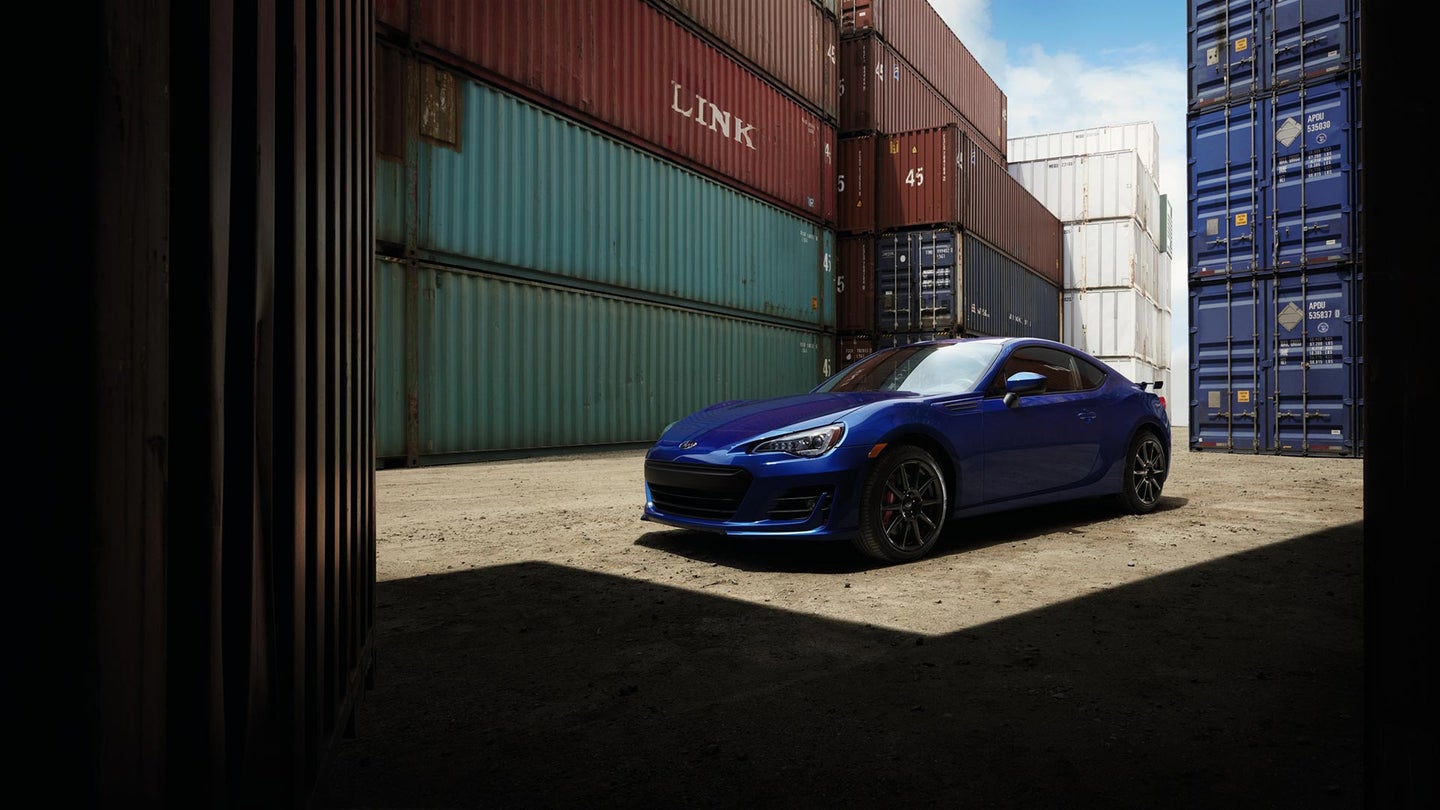 Plus, an outlet that will turn any device “smart.” 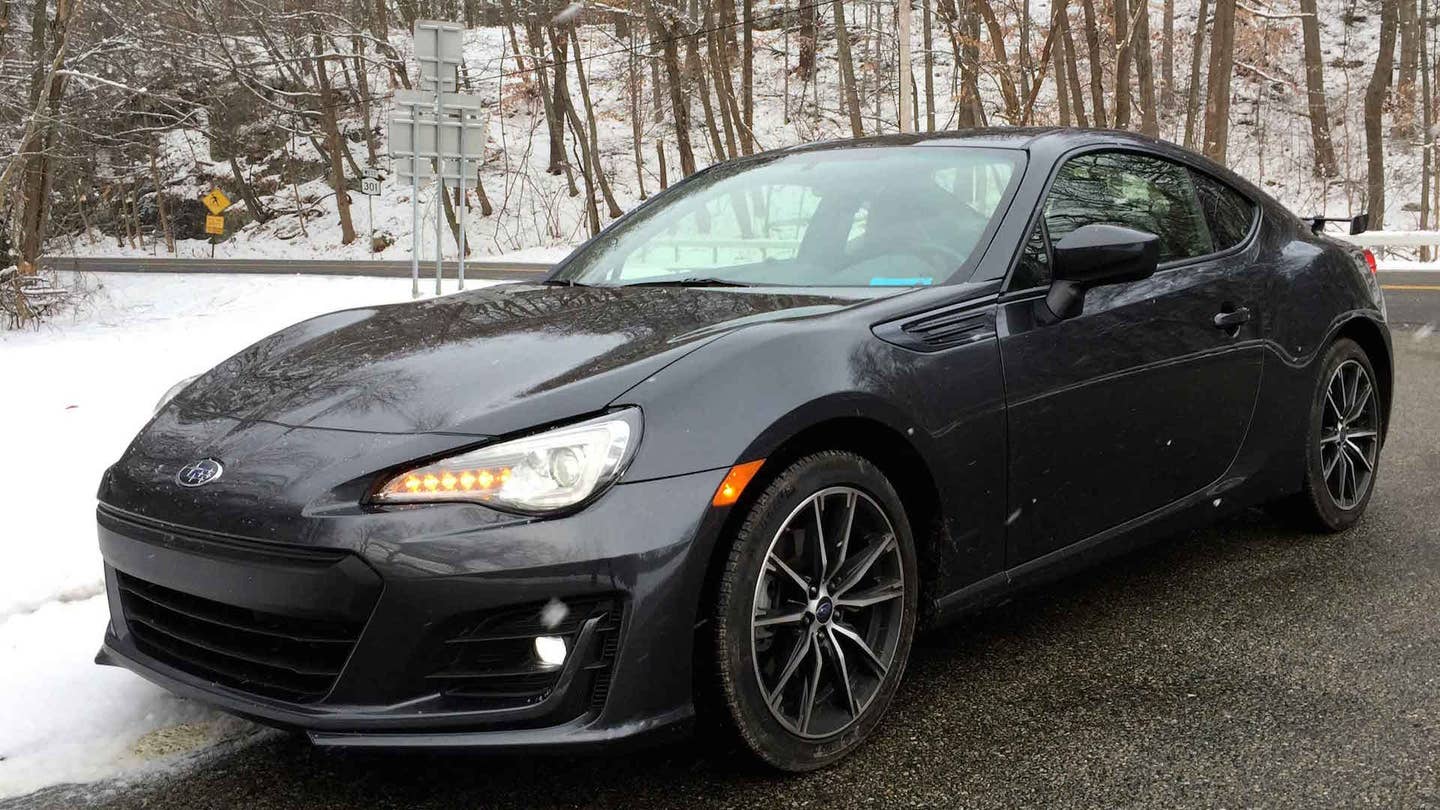 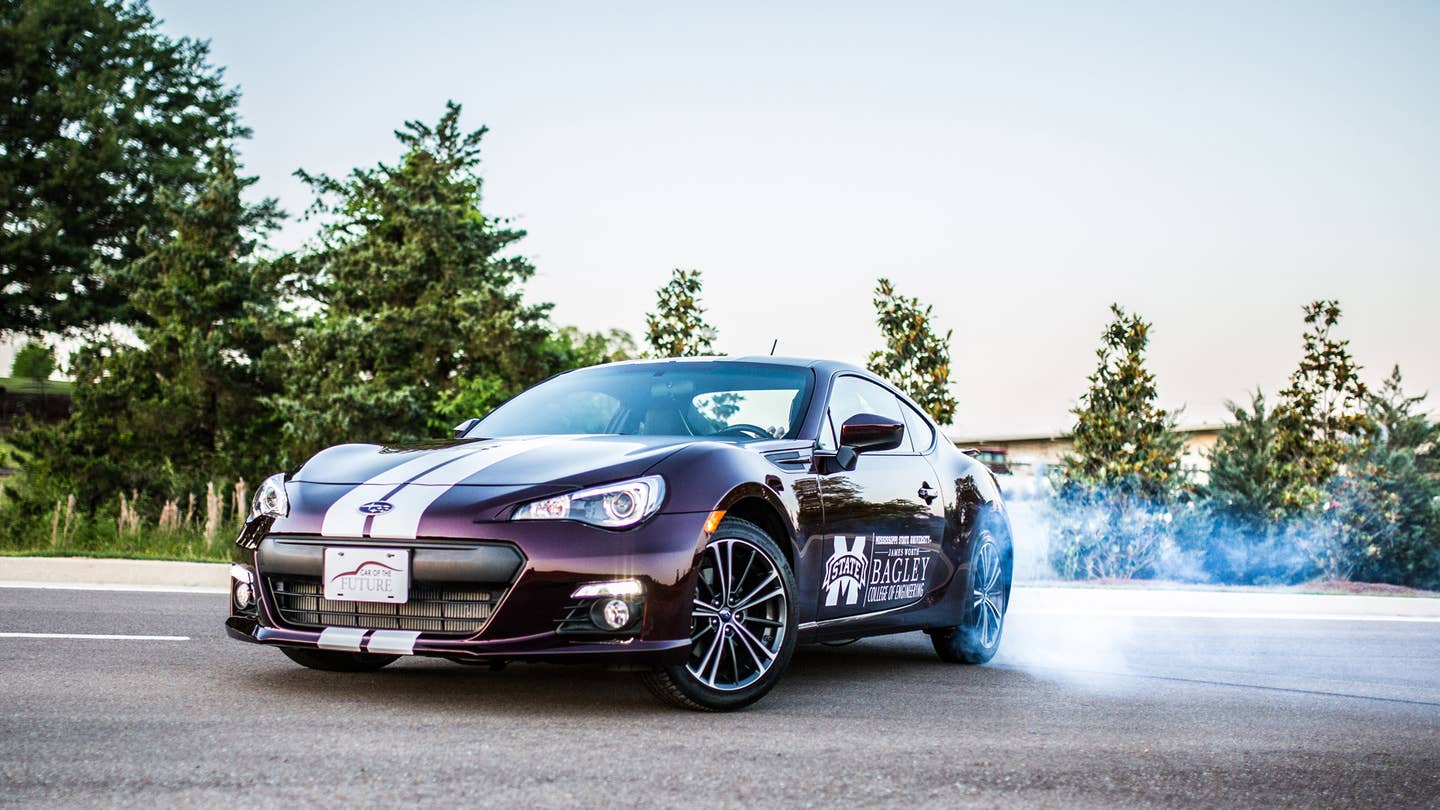 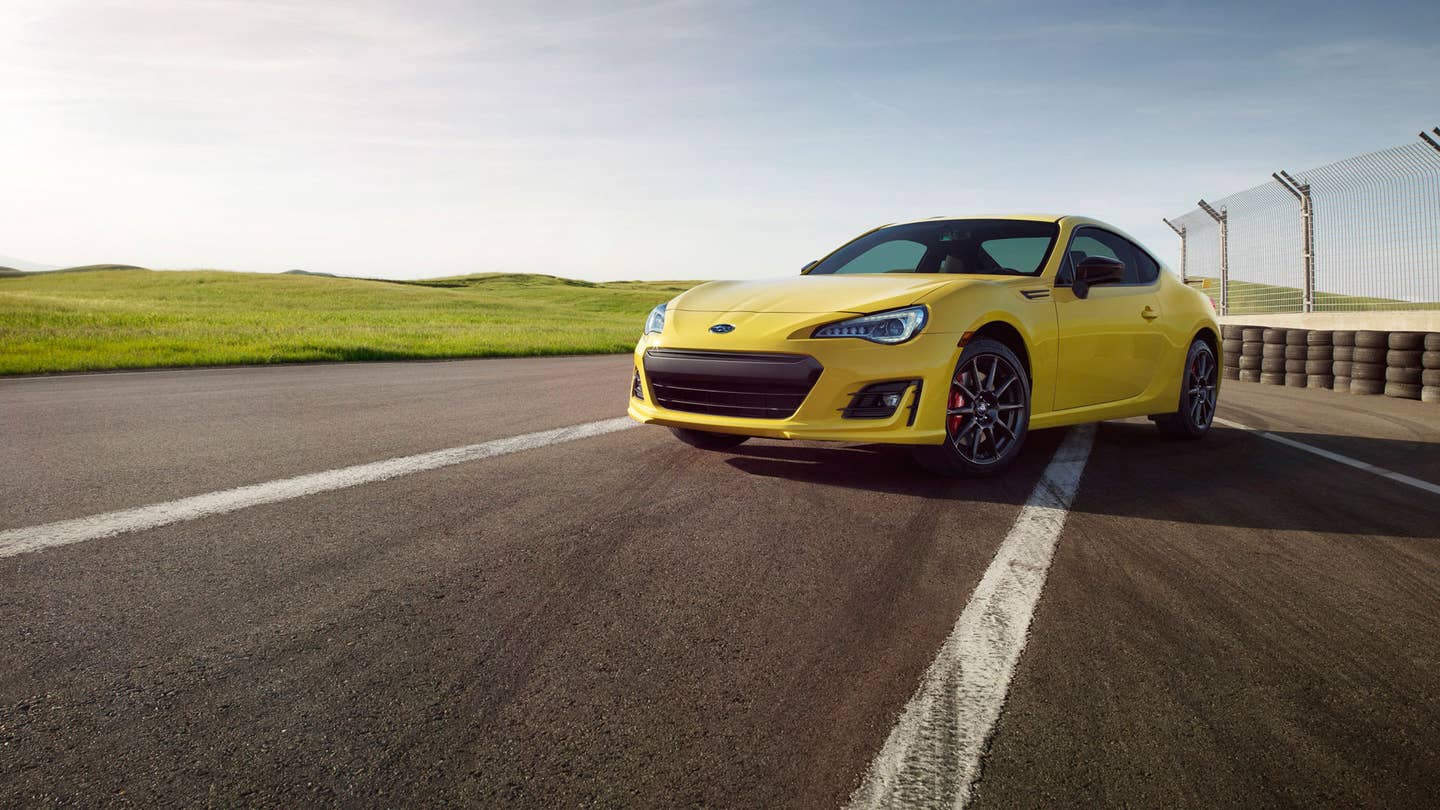 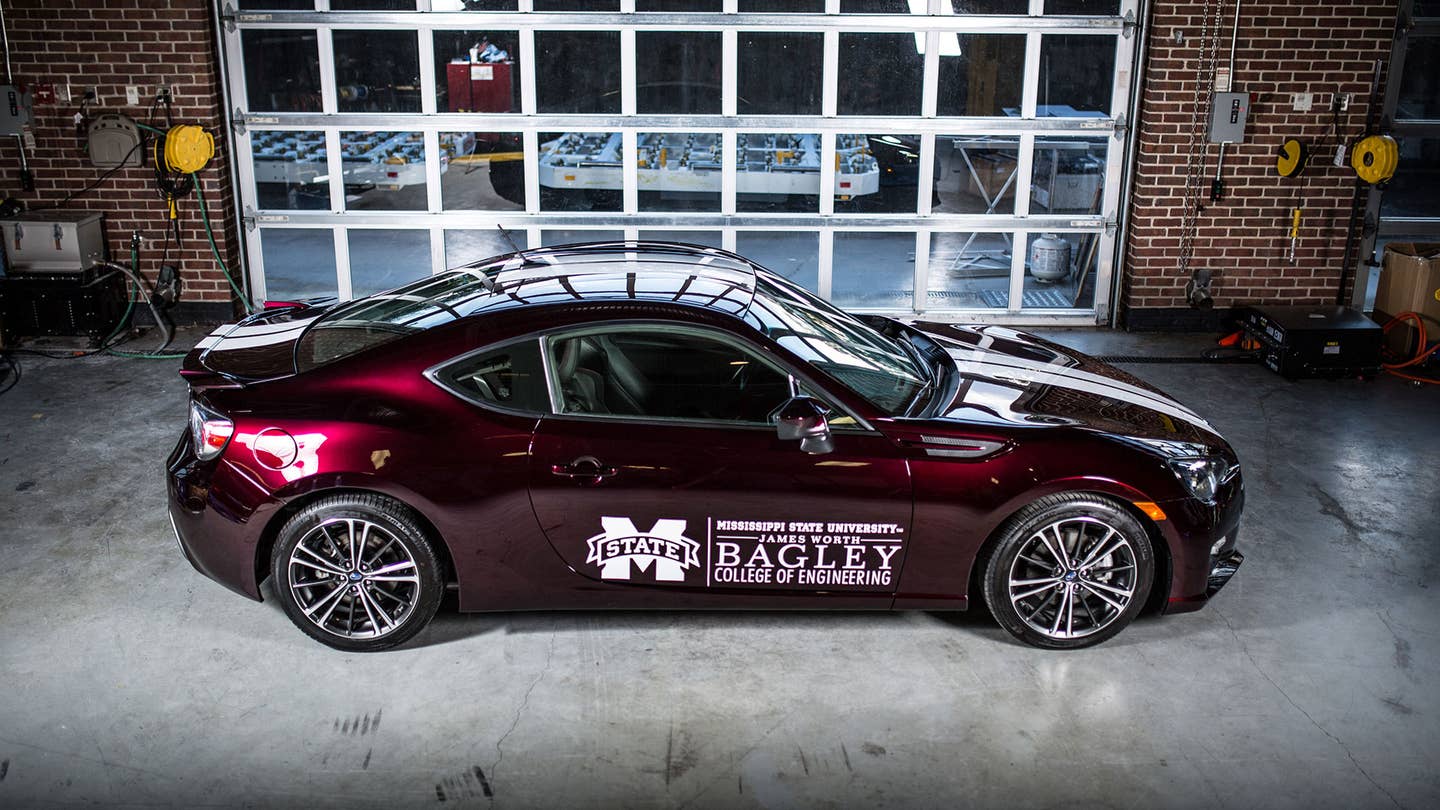