A 10-minute stint behind the wheel was enough to convince us that Lucid’s here to make waves.

It’s just an hour or so before the first 2022 Lucid Air all-electric production car officially rolls off the assembly line at Lucid’s factory in Casa Grande, Arizona. A section of the facility has been cordoned off to celebrate the occasion, replete with nightclub-style lighting and music, yet there’s a slight sense of tension in the air.

I’m sitting across from Eric Bach, Lucid’s senior vice president and chief engineer, who no doubt has been anticipating this day for quite some time. Lucid’s path to production hasn’t been as fraught with peril as some other newcomers in the EV space, but there’s no question that it’s been a herculean task nonetheless. And simply doing the thing isn’t enough: In an ever-expanding field of EV entries, grabbing a would-be buyer’s attention is becoming more difficult by the day.

Lucid has a killer app, though. By now, you may have read about Air’s industry-leading EPA range rating of 520 miles—a figure that Tesla vowed to achieve with the Model S Plaid but ultimately did not. While there are a myriad of factors that contribute to a vehicle’s efficiency, one talking point that stuck out to me during my tour of the factory was Lucid’s assertion that its drive motors are nearly three times as power-dense as their competitors’ units. I asked Bach how it was possible for Lucid to deliver technology that’s seemingly so far ahead of current industry standards.

“It’s not cost, it’s ability,” he explained. “It is sheerly an engineering challenge. Other OEMs look at what’s available from their suppliers and say, ‘Oh—there’s a 250-kW drive unit available from Bosch. For our next-generation car, let’s put 10 percent on top of that and ask for a 275-kW unit.’ Bosch can’t just triple what it's currently doing! Everyone lives off of benchmarks, so they incrementally spec up their systems. We instead approached this by hiring the best scientists in fields like electromagnetic design, thermal design, and mechanical design and told them to do something from the ground up, which achieves something that others have not.”

It doesn’t take long to get into the weeds when you’re talking about EV powertrain design with an engineer, and most of the really substantive bits remain under proprietary lock and key. Ultimately, the upshot is that Lucid looked at the options that were already out there and decided that it could do it better on its own.

That decision undoubtedly sent the company down a more difficult path to production, but if you want to get noticed, you’ve got to make waves. Although my stint behind the wheel of the Air Dream Edition Range earlier that day was brief—we’re talking 10 minutes through the Arizona desert, so keep this in mind when reading impressions from other outlets that attended the same preview—it was enough to make me realize that Lucid is about to do just that.

Drawing Up a New Playbook

In the flesh, the Air’s fit and finish look to be on par with typical luxury automaker standards. Panel gaps are fairly tight and consistent from end to end, there appear to be no glaring issues with the paint, and the bodywork is aligned properly. But that’s to be expected from a vehicle with a price tag deep into six-figure territory, isn’t it?

The exterior design isn’t especially daring, but elements like the light blade up front—which houses the vehicle’s cameras and lidar system within the assembly in order to hide what would otherwise be unsightly warts on the front end—help to give the car a legitimately futuristic look without resorting to gimmickry. Features like the polished metal trim that runs from the A-pillar back to the C-pillar yield an aesthetic that’s more elegant than athletic, though subtle touches like the integrated spoiler on the clamshell-style rear decklid do hint at the car’s performance capability.

It’s a similar theme inside as well. The Air doesn’t have the shock and awe factor of the Mercedes-Benz EQS and its array of screens, but high-quality materials and the curved 34-inch display (which includes a bank of quick-access functions on the left, the digital gauge cluster in the center, and the primary infotainment screen on the right) go a long way toward making the cabin look both premium and cutting edge in a layout that’s still familiar. The additional portrait-oriented touchscreen on the center console provides access to climate controls and other vehicle settings, but there are also physical controls for audio, HVAC, and the DreamDrive advanced driver-assistance system.

Lucid's first-ever production car comes in a variety of trims, starting with the base model that's simply called the Air. With a starting price of $77,400 before destination fees, the base, single-motor Air makes a claimed 480 horsepower and has a projected EPA-estimated range of 406 miles. Sitting at the top of the Air hierarchy are the Dream Editions. Two versions will be offered here: the Dream Edition Performance with 1,111 hp and the 520-mile Dream Edition Range, which makes 933 hp.

Both cars will be offered from $169,000 before destination fees or federal tax credits.

After a tour of the plant, Lucid gave me a chance to take the Air Dream Edition Range for a spin around the block with a representative riding shotgun. Located about an hour south of Phoenix in the middle of the Arizona desert, Casa Grande’s long expanses of flat, arrow-straight tarmac don’t provide an ideal venue to put the Air’s handling prowess to the test, but it certainly offered plenty of opportunities to drop the hammer.

The Air’s three drive modes are Smooth, Swift, and Sprint, which basically translate to Comfort, Sport, and Sport Plus in traditional terms. Smooth mode keeps the adaptive dampers soft, the steering light, and the accelerator and brake pedal sensitivity low.

It also caps the output at 670 hp, but even in its most relaxed setting, the Air had no problem smacking the back of my noggin into the headrest from a 40 mph roll, and triple-digit speeds arrived in stunningly short order. As with most EVs, the silence can be disarming; the Air’s well-isolated cabin blocks out the vast majority of road noise, and the barren Arizona desert doesn’t provide a ton of visual cues that give you a real sense of the speed that you’re carrying. More than once, I wondered if the speedometer was measuring kilometers rather than miles. It wasn’t.

Switching over to Swift tightens up the suspension, adds some weight to the steering, and ratchets up pedal sensitivity, but horsepower output remains the same as Smooth mode. To get all 933 hp out of the Air Dream Edition R’s motors, the car must be set to Sprint mode and then put through a battery conditioning routine. With limited drive time, experiencing the powertrain at its full potential just wasn’t feasible. But even in its standard state, the Lucid Air feels every bit as quick in a straight line as a Porsche Taycan Turbo S.

There were also only a handful of corners during the course of our drive that allowed me to dial in a decent amount of steering angle at speeds over, say, 20 mph. With a curb weight of over 5,000 pounds, the Air isn’t exactly gunning for the Caymans and Miatas of the world, but the car does feel planted thanks to its low center of gravity, all-wheel-drive grip, and Pirelli P Zero performance tires. Bach’s assertion that extensive testing was done at racetracks like Laguna Seca, Sonoma, and Thunderhill also bodes well for The Drive’s next, more substantive drive of the Air, which Lucid assured me is happening very soon.

In the meantime, what’s clear is that Lucid intends to be more than an also-ran EV manufacturer. However, sooner rather than later, the novelty of instant torque will start to feel familiar and battery technology will reach a level of efficiency where range becomes a non-issue. Numbers one-upsmanship isn’t going to cut it at that point, and I can’t help but wonder if there’s enough distinct character here to keep the momentum going once the EV honeymoon is over.

As soon as the uniqueness of driving them wears off, EVs admittedly all do drive pretty similarly. Eventually, automakers will need to move beyond that instant-torque party trick and do things that are more substantive while also capitalizing on EV powertrains and showcasing other innovations that would not be possible with an ICE configuration. So far, it seems like the Rivian R1T is a good example of that.

What Lucid must do to set itself apart from the established competition from Tesla and Porsche—and to justify its pricing—is offer buyers an experience they can’t get elsewhere. I can say that if Lucid set out to showcase its powertrain with this initial, 10-minute drive event, then that aspect of the car certainly does appear to do what Lucid claims it will do. The 34-inch screen is legitimately unique and fairly interesting, too.

I’ll still need more time to hone in on exactly what the Air’s distinctive character is and whether or not its design decisions are legitimately clever or merely gimmicky, of course. But for now, it is the latest space-age-feeling luxury EV that’s here for a slice of the pie. 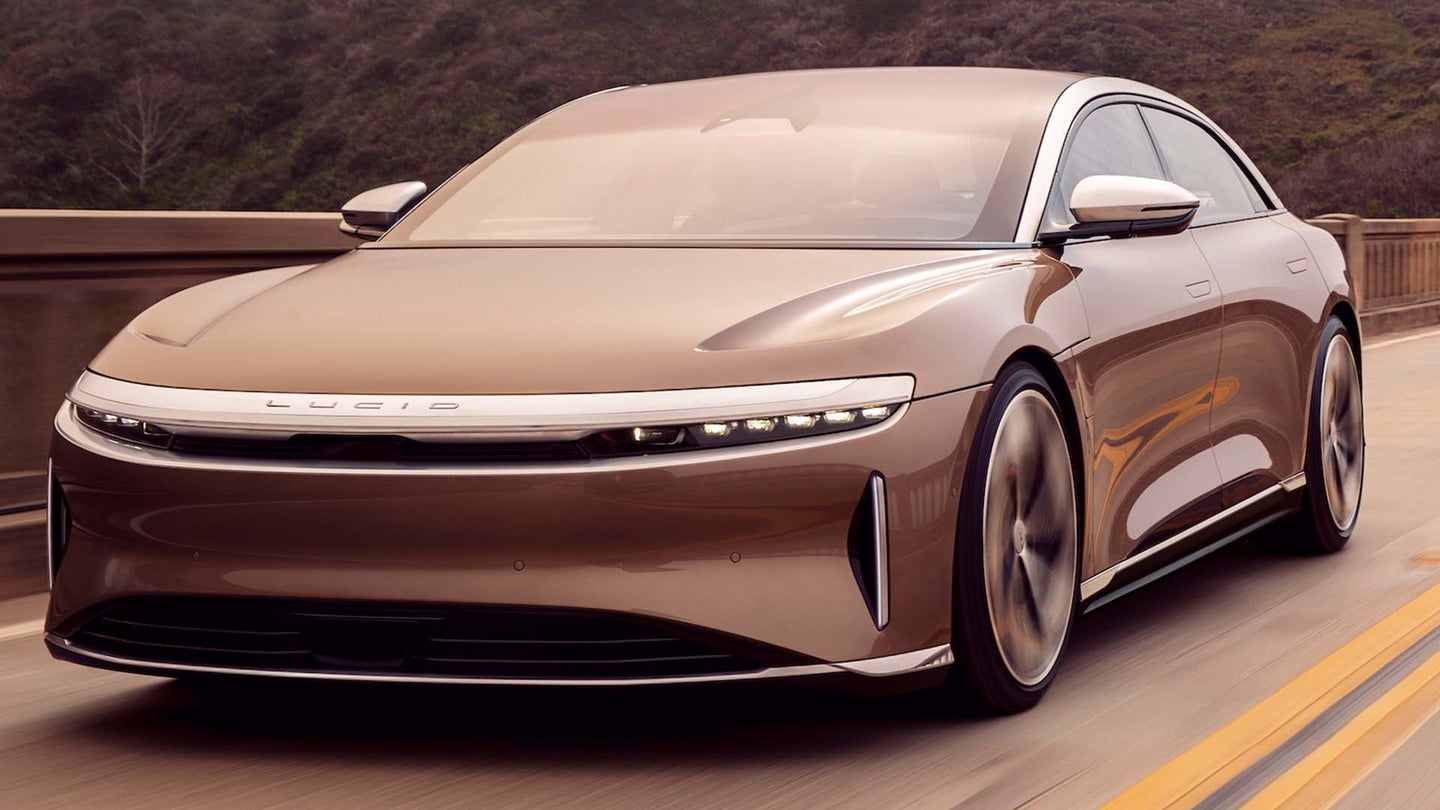 The Electric Lucid Air Officially Has 520 Miles of Range: EPA

That’s enough to get from San Francisco to San Diego without stopping. 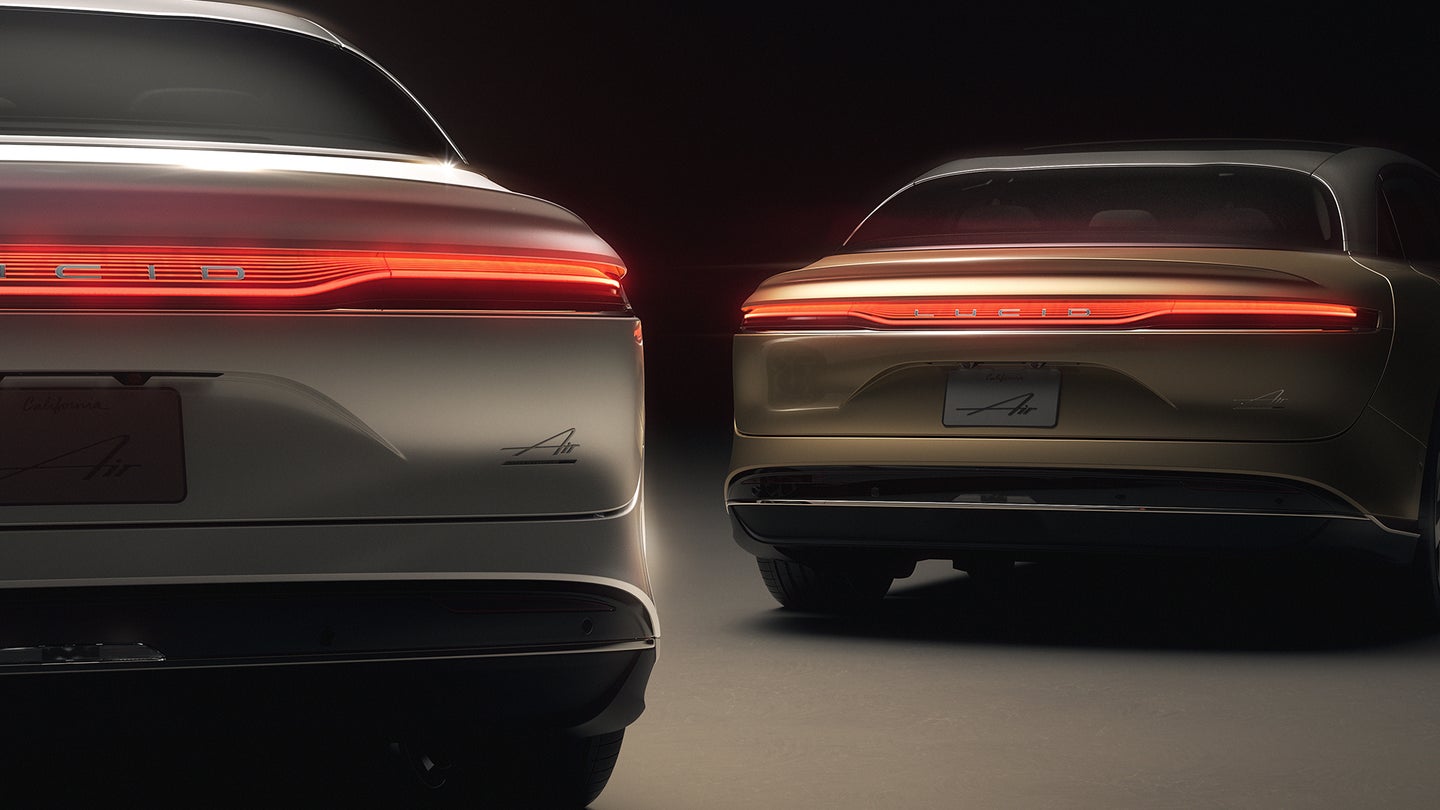 The EV arms race is here. 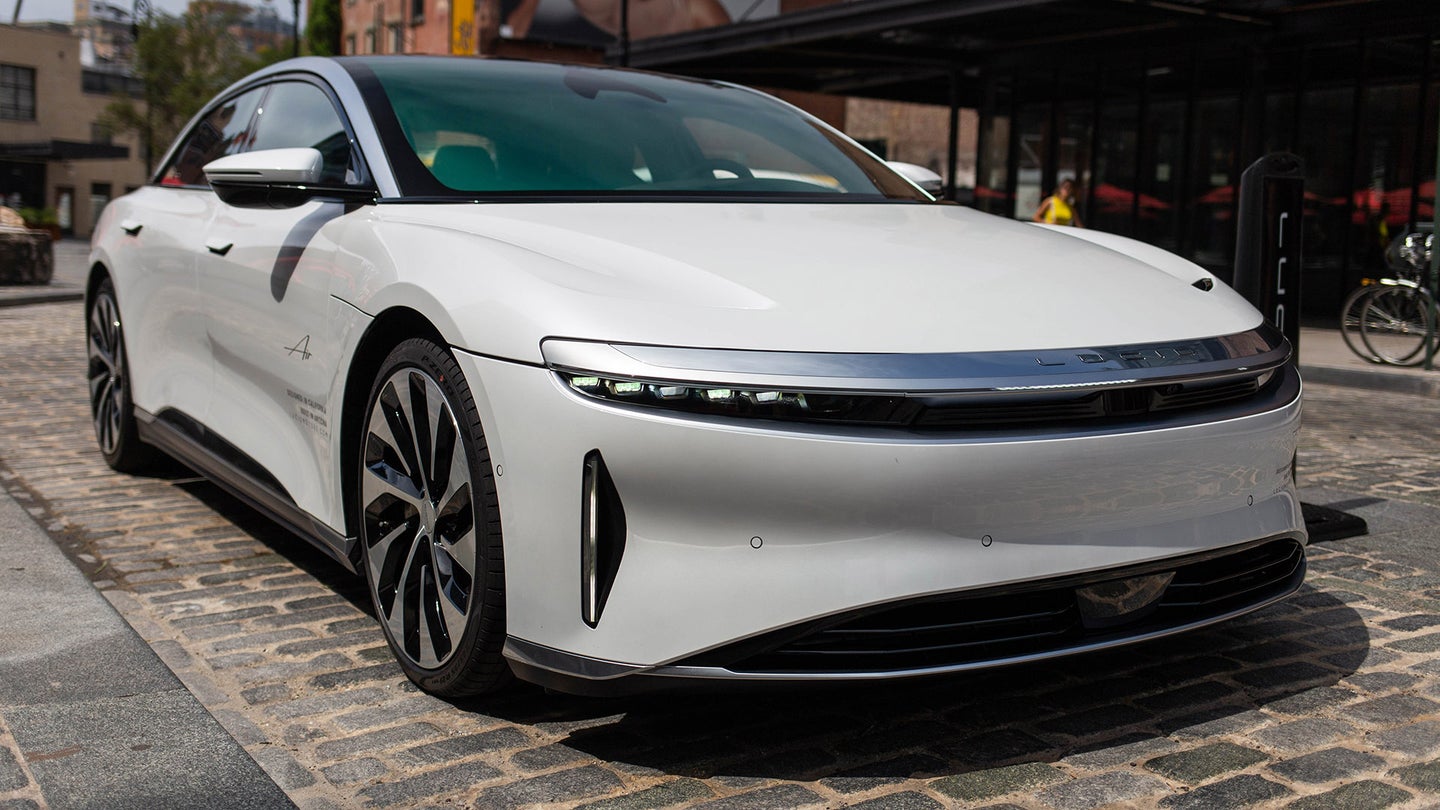 The Electric Lucid Air Has Incredible Legroom and Your Other Questions, Answered