Is This the Greatest Helmet Ever? 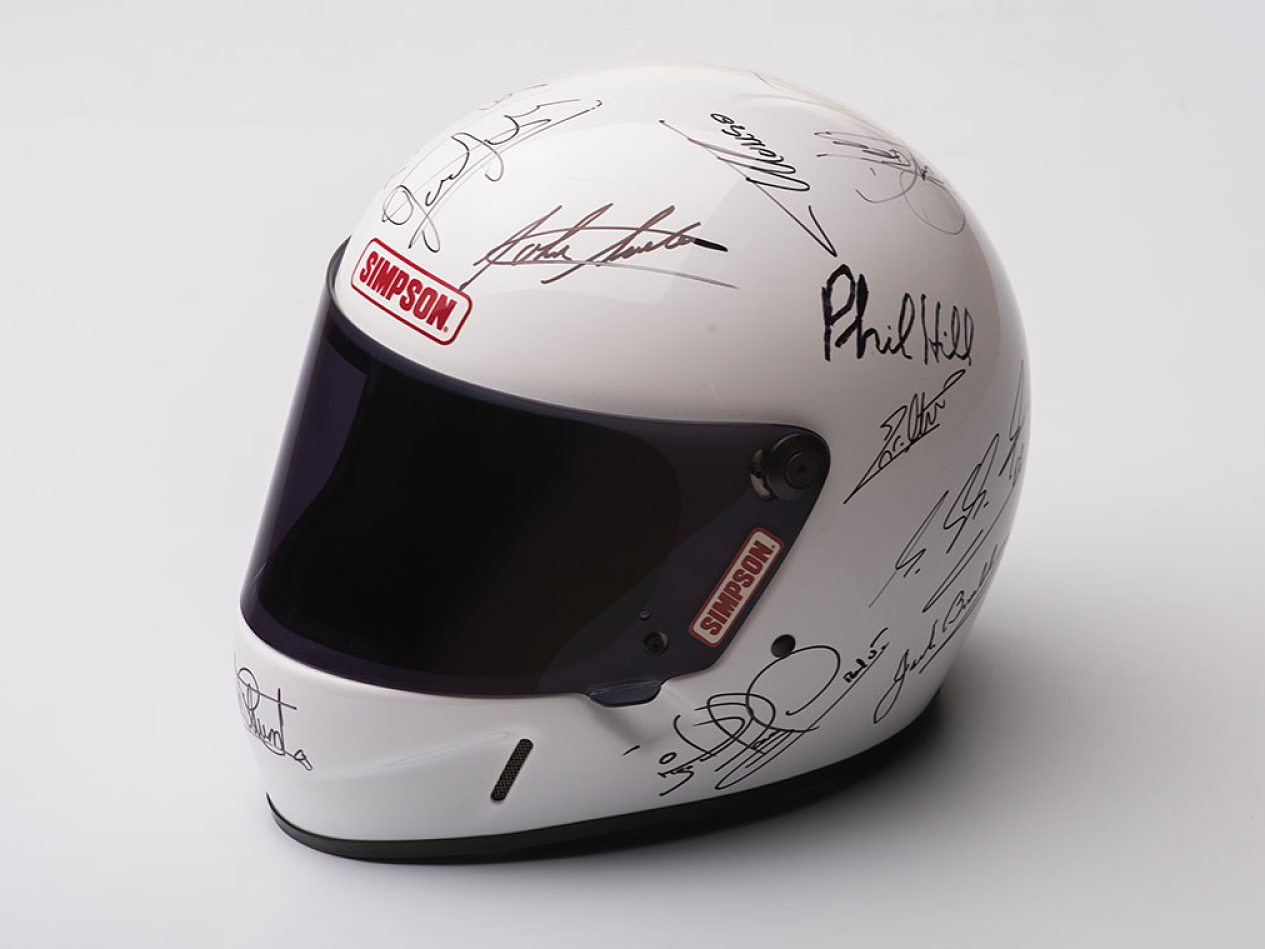 Look back over the history of racing, and you keep coming back to one question: How the hell did they do it? How’d they manage 120 mph over bricks at Indy before WWII? Or race for than 23 of 24 hours at Le Mans, alone, without a relief driver? How’d they tear through the tunnel during the Moanco Grand Prix, fuel tanks resting on their thighs, flat-out? And then you remember that full-face helmets weren’t ubiquitous until the 1970s. Either that makes you feel like a coward by comparison, or it should.

Dan Gurney was the first F1 driver to use a full-face. Of course he was. Always in search of something better, Gurney turned eight laps of the 1968 British Grand Prix in an elegant black Bell STAR. Two weeks later, at the Nurburgring, he made history by finishing an F1 Grand Prix wearing the same helmet. Yesterday, I’d have said that Gurney’s simple, iconic Bell is the coolest full-face lid ever. Now, I’m not so sure.

Behold, this Simpson helmet, autographed by 22 of F1’s World Champions. It’s the work of longtime Autoweek motorsport correspondent Al Pearce. In late 2007, he began undertaking the wildly ambitious project of the signature of every living World Champion. Pearce says the whole thing was a madcap dash through F1 history:

“The first to sign was Phil Hill, whose daughter and son welcomed me into his home the Monday after the NASCAR weekend in Phoenix. In less than two weeks, I also had autographs from Jacques Villeneuve, Emerson Fittipaldi, and Mario Andretti. By mid-December, after a quick trip to London, I had autographs from Sir Jackie Stewart, Damon Hill, and John Surtees.

In January of 2008, I visited Alain Prost and Fernando Alonso in Paris and found Jody Scheckter in rural England. In February, I dashed overnight from Virginia to Sebring to get Nigel Mansell’s autograph. Within 12 days in April, I met with Michael Schumacher in Toronto and flew to visit Niki Lauda in Vienna. A colleague then helped with autographs from Keke Rosberg, Mika Hakkinen, and Kimi Raikkonen in Monte Carlo.

Later that summer, I rendezvoused with Alan Jones in California and shipped the helmet to Sir Jack Brabham in Australia. In December of 2008, I got Lewis Hamilton in London and Piquet in Brasilia. After taking 2009 to regroup, I got the final two: Jenson Button and Sebastian Vettel in London in December of 2010. Since Vettel and Hamilton have shared the last five F1 titles, the helmet is current: 22 champions!”

Pearce will auction off the finished product at RM Sotheby’s in Monaco this May. All proceeds go to charity.