Going deep inside the city’s strangest—and most utilitarian—piece of civic architecture. 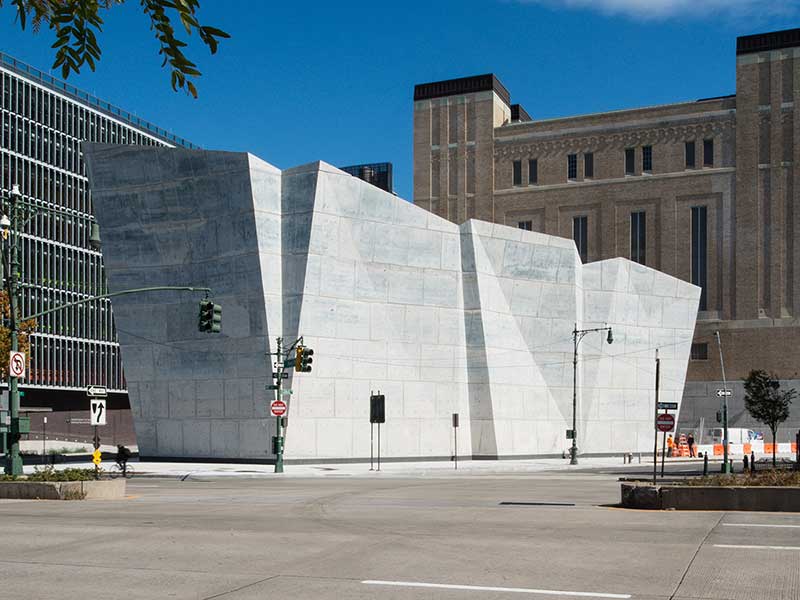 The City of New York Department of Sanitation (DSNY) is charged with all of the urban tasks deemed too thankless for Sisyphus: sweeping streets, sorting recycling, emptying corner bins. And ridding our 6,000 miles of ruined roadways of a wintry mix unrivaled in quantity, consistency and duration by anything this side of Hoth.

In order to aid in this arctic labor, New York—like nearly every other major American city since Detroit set the trend in 1940 (being blessed as it was with a prehistoric deposit)—salts it roads. Because it’s water-soluble, salt mixes readily with snow and ice and alters the colligative property of water, lowering the freezing point. That magical trait, however, is also why it can’t just be stored in giant outdoor piles.

“There are approximately 40 salt sheds around the city,” says Paul Bauer, principal of civic firm Dattner Architects, pointing down at his office’s latest project from the roof of a nearby parking structure. “But none quite like this.”

Bauer is gesturing at a hulking, princess-cut, blue-white megalith below us, on the corner of Spring and West streets in a no-name Lower Manhattan neighborhood we like to call Holland Tunnelia. Towering some 70 feet at its highest point, with walls ranging from 2 to 6 feet thick, and made of 4,900 cubic yards of architectural concrete, this is the DSNY's and NYC Department of Design & Construction's first fully enclosed, ventilated salt shed. And it is inspired, in form and function, by the material it is built to hold. All 10 million pounds of it.

“A salt crystal is the shape of a cube,” Bauer says. “That was sort of the genesis of this design, a series of cubes on a base. But as the design evolved, it became apparent that we couldn’t keep the base, and the form started to morph a bit. But it’s still crystalline, inspired by a salt crystal.”

Inside, the building is highest on the side facing the river, opposite the giant 40-foot steel roll-up door through which salt will be delivered. “It has to be tall enough for a semi flatbed dump truck to get inside,” says Gia Mainiero, a Dattner architect. “And then to elevate its payload to vertical and shake out the last of the salt.”

Tractor-trailer deliveries will happen periodically throughout the winter. Teams of front loaders will crawl about inside, around and atop the astringent pile, pushing the salt against the giant back wall and allowing it to rest at a natural angle of repose. Dozens of salt spreaders will pull up out front and acquire their corrosive cargo.

Because of the impending presence of all of this abrasive, collision-prone heavy machinery, protective half-inch-thick replaceable steel plating lines the shed’s interior walls to a height of eight feet. And the floor itself is what is known as a “sacrificial topping slab,” a non-structural layer that can also be readily replaced if it is gouged or worn out.

Speaking of sacrificial slabs, the interior has the bearing of an ancient temple, not only because of its windowless, sky-lit severity, or its muffling silence—even surrounded by the recoiling din of jackhammers. It’s the temperature, which, because of the insulating walls, will remain the same year ‘round. “Like a cave,” Bauer says.

Mainiero informs us that the concrete, which is blue-tinged due to its high slag content, will whiten further as it is exposed to the ultraviolet rays of the sun, causing it to resemble even further the crystals it will contain. We wonder aloud whether the DSNY has kept up with recent culinary trends, privileging obscure and colorful forms of halite. “This year’s order comes from Chile, and it’s just going to be white road salt,” Bauer says. “No Himalayan table salt for us,” Mainiero adds.

We walk around to the side of the shed where the sun is brightest. Here, because of the light and the solar bleaching, the building’s compound cuts and facets are far more visible. The fractal-like surface puts us in mind of the precarious angularity of Barnett Newman’s Broken Obelisk: angles, teetering on jarring pinpoint angles.

“No Himalayan table salt for us.”

Taken as a whole, however, the structure is not only delicate and beautiful but jovial, like an outsize isotope from some elementary-school science cartoon that leapt and landed perfectly, here. Once glass blocks with integrated LED fixtures are placed in the sidewalk around the base, the façade will be up-lit at night, enhancing this effect.

These surfaces were so complicated that traditional architectural rendering techniques—clay, cardboard or wood—couldn’t capture the exterior in a way that afforded ready, iterative work. So the modeling was all done in a 3D computer software called REVIT and then 3D-printed for daily evaluations.

Asked whether the shed might darken from exhaust exposure to traffic on the adjajent West Side Highway, Mainiero assures us that the high density of cement in the concrete mix will prevent this. “Sadly, we don’t have a computer tool for rendering aging, like the FBI,” Bauer says. “But when you’re working for the DSNY, you don’t want to have a dirty building.”