These Korean Yogurt Mobiles Are Coming for Mister Softee

These 5-mph refrigerator-zambonis are Korea’s answer to the ice-cream truck. 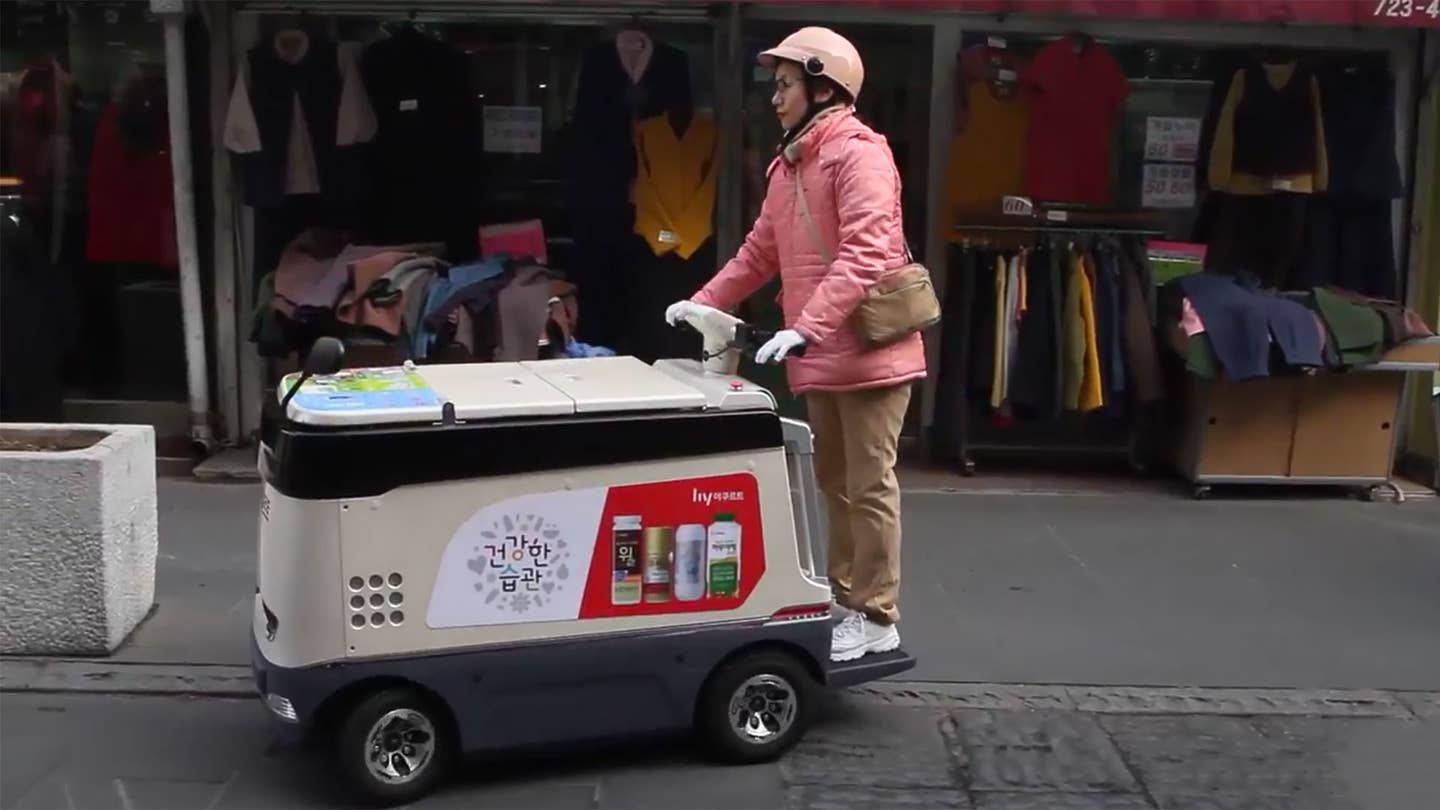 Unbeknownst to many outside the region, many residents of South Korea consume at least one drinkable mini-yoghurt every day. As with Jamie Lee Curtis and her infamous shilling for Activia, the idea is that consuming a particular strain of Lactobacillus bacteria can encourage the growth of digestive enzymes and gut health. The way that 90% of yoghurt-swillers receive their daily slurp is via delivery: over 13,000 delivery ladies (all are women) are employed by Korea Yakult Co. to get the goods to customers. Formerly, these women pulled heavy carts filled with hundreds of yoghurts and ice to customers doors, but last year, Korea made of the major mechanical breakthrough for which it's so well known: motorized refrigerators. Today, over 4,000 little yoghurt zambonis are patrolling Korea's streets, delivering tangy dairy to the masses.

These little machines, essentially a Segway with 500-pound refrigerators affixed to the front, exist in a strange legal zone. Officially, the machines are motorized bicycles, though only vehicles classified as cars are allowed on all roads. Finally, Korea Yakult Co. found a footnote to the effect that any vehicle with a top speed under 15.5 mph doesn't have to be registered as a standard vehicle, but may use all roads. So, the carts top out at 5 mph.

To avoid the strict safety regulations to which cars are subject, Korea Yakult opted not to install a seat. Delivery women stand at the rear, like gardeners on small platforms behind deck lawn mowers. To the horror of company officials, one helpful husband affixed a small wicker seat to his wife's cart, which was quickly removed. All 3,300 mini yoghurts in each cart are, however, provided shelving.

Though vastly different in scale, capacity and design, these futuristic Yogurtmobiles have something in common with New York's own Mister Softee trucks: they're fattening. One woman, after years of delivering by foot, has begun to put on weight, saying that she just doesn't move as much now that she rides a refrigerator. The future of sweetened dairy is here, but it's still jiggling.