What Used Trucks to Avoid

Used, abused, and looking for a new sucker, these are the 10 used pickup trucks you should avoid. 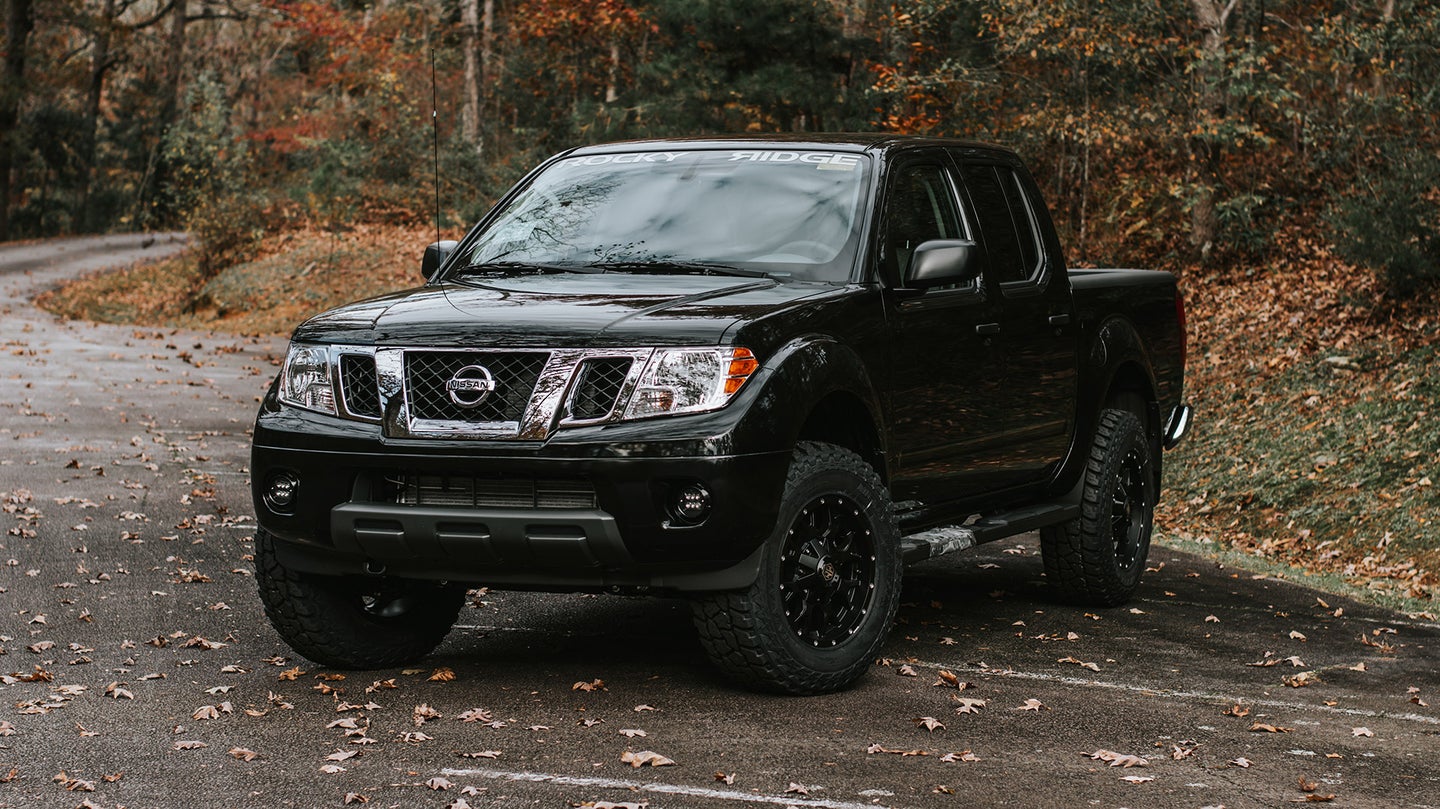 Trucks are the lifeblood of the American auto industry as Americans buy more trucks on a scale that beggars belief. In fact, the most popular vehicle in the U.S. is the Ford F-150 and has been for over 40 years. Trucks are about as American as apple pie, baseball, and heart disease and as such, a lot of pickup trucks end up on the used market. But how do you tell which is a lemon?

The auto industry has gone through major technological upheavals in the past three decades as safety, reliability, and longevity have improved significantly. (If there was any doubt, we’d like to direct your attention to the AMC Gremlin.) The push for consumer satisfaction and safety have also added complexity to what was once a simple construct, and sometimes that complexity doesn't work out the way engineers had planned.

To set you up for successful ownership, The Drive’s How-To department is here to give you the skinny on just about every used pickup truck you should avoid like you avoid Covid-19.

Here Are the Used Pickup Trucks You Should Absolutely Avoid

Ready to read some horror stories?

The tenth-generation Ford F-150 takes the top spot of this list for one massive fault: when it got into an accident, either head-on, side, or in the frontal overlap area, it would fold like an origami crane.

It’s unclear whether the F-150’s design or its materials were directly to blame, but after both the NHTSA and IIHS tested the truck, each found it severely lacking in safety, with the NHTSA giving it two stars out of five and the IIHS delivering a “Poor” rating. The carnage above is from one of those tests.

The tenth-generation Ford F-150 had other problems, too, including a faulty cruise control system that could catch fire. The cruise control fire risk would see Ford recall 155,000 pickups and SUVs in 2007, while a total of 5.8 million cars, trucks and SUVs would be recalled between 2005 and 2007 with model years spanning 1994 to 2002.

And yes, that includes the Fast and the Furious Ford Lightning. Sorry.

While Ford’s first-generation Ford F-250 Super Duty kicked off the F-Series sub brand that has since delivered a great set of trucks, the first Super Duties suffered a host of problems. Chief among them, two words no driver ever wants to hear; unintended acceleration.

Unintended acceleration proved to be a lurking specter throughout the late 1990s to early 2000s thanks to the massive publicity around a Toyota recall of more than 14 million cars worldwide and Ford wasn’t immune. In addition to the Super Duty’s affected, the Blue Oval’s lineup of cars and SUVs saw a handful of recalls to supposedly fix the issue.

Additionally, the early Super Duty pickups were prone to engine failure, shaky suspension, and premature braking. For 2011, the F-250 Super Duty acquired the “death wobble,” a too-and-fro motion occurring at highway speed. Best stay away from this particular truck, although you could get one with a V10 engine, which counters the potential for injury somewhat. Maybe not.

Years before the 707 horsepower, supercharged V8 Hellcat, Dodge plucked the naturally aspirated 8.3-liter V10 out of the Viper supercar and plopped it into a Ram pickup. We ask you, what could go wrong? A lot, apparently.

Though the Viper’s's V10 has roots in a truck block, by the time the Ram SRT-10 was released in 2004, it had already been changed to match the Viper's athleticism. In a bid to reduce the Ram SRT-10’s maintenance costs, Dodge swapped a number of the drivetrain’s more costly parts for cheaper ones. That proved to be a double-edged sword as those parts were far more failure-prone.

Those included the truck’s clutch hydraulics, oil lines and oil coolers, power steering, and shifter. Add to that transmission fluid that needed to be replaced yearly. The Ram SRT-10 trucks also drank gasoline at an alarming rate, barely netting 9 mpg. According to a handful of RAM SRT-10 owners, you’ll have to dip into your kid’s college education savings account just to keep it gassed up.

As it will become painfully obvious as this list progresses, the late 1990s to early 2000s weren’t the best years for truck manufacturers. And Dodge was no different. The second-generation Ram 1500 pickup wasn’t loved at its birth nor is it loved 20 years on.

Stemming mostly from its poorly considered 4.7-liter “Magnum” V8, which was used across the Dodge portfolio, the Ram 1500’s version had oil sludge problems and an engine and transmission failures. Other issues seen across the lineup included cracked dashboards, faulty electronics, premature rusting (even when well-maintained) and interior trim that would just fall off.

Dodge released more than 16 recalls for the Ram 1500 of this vintage. It's likely some were never addressed. Do you really want a potential time bomb sitting in your driveway? We thought not.

Toyota is generally known for bulletproof reliability. Heck, go anywhere in the developing world and you’ll find 500,000-mile Toyota pickup trucks for sale and still in use, and they won’t be going to the scrapyard any time soon. That’s, unfortunately, not the case for the early 2000s Tundra.

One of the biggest issues for the Toyota Tundra was a 110,000-unit recall for a rusting rear crossmember. For those making a puzzled face, a crossmember is a frame support that runs transversely and helps keep the entire structure together. So, you know, it's something you don’t want rusting away.

Along with the rusting issue, Tundras have been prone to HVAC and air pump failure, piston issues in the 5.7-liter V8, electrical gremlins and prematurely fading paint. Maybe reliability skips a generation? Then again, the unkillable Tacoma of the same generation doesn’t have as many problems.

Like Toyota, Honda’s reliability is legendary. Nearly everything Honda makes, from lawnmowers to IndyCars, are capable of reliably running for hundreds of thousands of miles, some even crossing into the million-mile club. But Honda’s first-generation Ridgeline, and specifically it’s first production year, is notoriously unreliable. Some could even say it takes on a very Italian personality.

The 2006 Honda Ridgeline wasn't just bad in terms of paint peeling, HVAC issues, rusting, and electrical gremlins, though all those were experienced, too, but those Ridgelines suffered from a defect that would scrap the entire engine. According to owners, the number 4 cylinder on the 3.5-liter V6 would inevitably go bad, burn oil and ultimately seize, necessitating a full-on engine swap. And while Honda parts are often cheap, an entirely new 3.5-liter V6 engine, along with all the components to go with it, isn’t.

Between labor, installation and the downtime it takes to replace an entire engine, you’re looking at way more hassle than the entire truck is worth. Plus, the new Ridgeline has been around for a handful of years, bringing prices down and without a lick of maintenance issues. Honda’s reliability is back, baby!

Oh, Nissan. What was once a great company has fallen on some seriously hard times after two global financial crises and what with their former CEO being arrested, let go, rearrested, let go again, and arrested once more before a transcontinental escape to a non-extradition country. But even at its height, there were some big issues revolving its truck portfolio, including the Nissan Frontier.

The Frontier’s biggest issue, one that Nissan seems incapable of fixing is that the truck’s radiator design is prone to failure and cracking. And when it cracks, the way the engine bay is designed, the radiator fluid tends to find its way into the transmission housing, which corrupts the transmission fluid and seizes the entire unit. Which means you’ll not only need a new radiator that’ll likely crack again, but also a new transmission.

Newer Frontiers seem to have fixed the issue, which is great because you can get them for a song right now. They’re great small trucks and return a modicum of Nissan’s former reliability it had lost. Buy one of those and stay at least 6-feet away from older Frontiers at all times. Maybe even wear a mask.

Nissan returns to the list with the company’s full-size pickup truck, the Titan, which, like the Frontier, wasn’t some of Japan’s best work. The first-generation Nissan Titan stuck around for a whopping 12 years, nearly 5 years more than your average truck or car’s life cycle. In that time, it had its host of issues, but none more pressing than its rear axle issues.

According to Titan customers, the pickup truck was prone to eat rear axle seals and leaking its differential fluids everywhere. What’s worse was that if too much differential fluid escaped the housing’s confines, the entire rear axle would need replacing. Refurbished Titan rear axles cost between $1,500 and $2,500, but that doesn’t include downtime and the necessary labor, which adds up quickly.

Though the second-generation wasn’t the sales bonanza Nissan had hoped, it is, however, a better-built pickup truck and does exactly what Nissan said it does. That said, the interior of the second-generation Titan resembles its predecessor and doesn’t feel as 21st century as it should. Sorry, Nissan, but the truth sometimes hurts.

As truck sizes have increased like Bruce Banner becoming the Hulk, smaller trucks like Chevrolet’s Colorado seem to be the logical choice for those who don't need the size and footprint of a Humvee. However, when Chevrolet dropped the S10 name from its lineup in favor of the new Colorado, things didn’t go quite as planned.

Owners have found that the Colorado suffers from premature rusting along its frame, faulty window seals that let water into the truck’s cab, starter motor failure, misfires, HVAC failure, a bad electrical system including a faulty check engine light, bad child seat anchors, and a number of transmission problems.

One issue that plagued many Colorados, and spurred a recall of the truck, was that the brake lights would sometimes not illuminate when the brake pedal was pressed. This fault could lead to another car plowing into the rear of your Colorado. Not a great situation for you or the car hitting you.

Spanning from the early 2000s to 2015, Chevrolet’s Silverado has the widest range of years to avoid at all costs. No one’s really sure why Chevrolet had so many issues, or why those issues jumped from component to component as the Bowtie attempted to fix the last issue, but the Silverado has seen it all break.

Older Silverados had rusted brake lines which, we’re not sure if you’ve heard, is pretty dangerous. There were also issues with power steering, weird clunking noises heard throughout the cabin, the oil slurping 5.3-liter V8 that’d go through a quart every 1,000 miles, HVAC issues, paint imperfections and peeling, transmission failures and faulty suspension components.

We’ve seen our fair share of pickup truck lemons in our time and an ever-expanding range of poor used-car decisions, some we’ve even committed ourselves—ask the author about his ownership of a used Volkswagen Passat W8. To make less risky purchases, here are The Drive’s pro tips for buying used pickup trucks.

Repair, Restore, or Replace Your Used Truck With the Help of Morris 4X4 Center

Whether you're repairing a used truck you just bought to save it from one of the maladies mentioned above, or replacing an old part on your off-road toy, our pals at Morris 4X4 Center are here to help you get through your next 4x4 project. Click the link here and get you the off-road assistance you need.